The internet has been good to the octopus. A cephalopod, animals considered the most intelligent of invertebrates, the octopus and its brethren shine on camera, where their shapeshifting, color-morphing, jar-opening, and other superhero abilities are regularly captured and fêted by researchers and the media. Who can forget Inky’s Great Escape?

It wasn’t always this way. Oh, no, no, no. Before technology could expose their talents as an idea worth spreading for all the world to see via social media, octopuses often personified evil in coastal cultures, what with their eight-limbed grasp, secretive lives, and beaks that could go mouth-a-mano with a Masamune blade. Land octopuses were especially evil, like this particular cartographic land octopus (CLO) penned by Japanese university student Kisaburo Ohara in 1904, when his country was at war with Russia.

This satirical map is an example of persuasive cartography, maps designed to make a point beyond a spatial one—to send a message to a targeted audience. In this case, Japan directed the missive at Britain.

CLOs have been a staple of persuasive maps, says P. J. Mode, who has collected the maps for over 30 years, donating his collection to New York’s Cornell University in 2015. The heyday of this particular cartographic style was from the late 1800s until about the First World War. This map is one of Mode’s favorites. “Visually, it’s compelling and the English text makes it intriguing,” he says. “And the octopus works well with island nations like Japan because it’s conceptually right.”

The black octopus represents Russian rapacity. The English text is a shout-out to the Brits, Japan’s ally. The cartographer emphasizes the two nations’ shared hostility toward Russian expansionism, but adds that the “little fish” can take on the black octopus alone. Any help from Britain would threaten to draw Russia’s ally, France, into the war.

“A Humorous Diplomatic Atlas of Europe and Asia,” the map’s official title, is a geographic extension of some other CLO maps in Mode’s collection that use octopuses to illustrate the military tensions among the European imperial powers of the time. 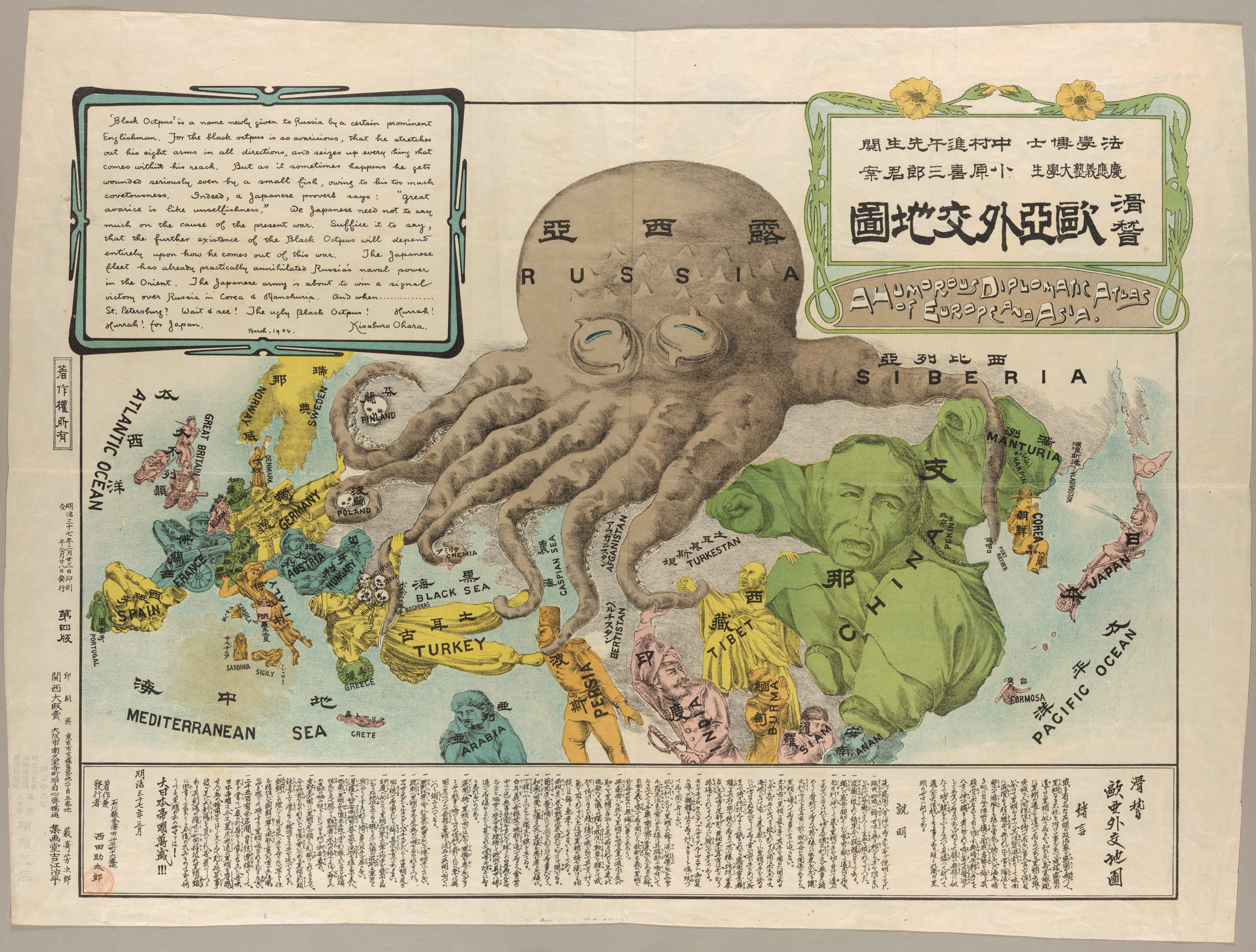 “War brings out, in a very organized and direct way, the need to persuade,” Mode says.

The Brits kept to the sidelines. And Japan quickly showed its superiority over Russian forces, launching a successful surprise attack on the Russian fleet in February 1904, in Port Arthur, Manchuria (now the Lüshunkou District in China).

For Japan, winning was crucial to its identity as a colonizing force in its own right, an imperial rival in East Asia. Russia, France, and Germany had already ganged up against Japan when it sought—like the imperialist West—to claim Chinese territory, Janice Matsumura, a historian at British Columbia’s Simon Fraser University, says in an email.

“It would have been in Japan’s interest to promote some wedge between Russia and other European nations,” says Matsumura.

Depicting Russia as a CLO did not stop with this map. Persuasive cartographers have painted Russian CLOs red when it was the Soviet Union and, Mode says, a 2008 map drew Russian President Vladimir Putin as a CLO, a beige one. “I’m not sure why that is,” Mode says, clearly bemused.

And surely, whether superhero smart or evil, a bland beige octopus is conceptually wrong.