From land, sea turtles instinctively move toward the brightest area on the horizon; when artificial lights confuse them, the results can be deadly. Photo by Christopher Doherty/Alamy Stock Photo

Casey Jones was a broken-hearted bachelor when he discovered another love that would change his life. The hazmat truck driver and avid Florida Gators football fan had moved close to the beach four years earlier after breaking up with a girlfriend and asking himself, “What does a single guy do? A single guy goes and lives near the beach.” He settled in Atlantic Beach, Florida. One night, he was riding his bike along the neighboring city of Jacksonville Beach’s shores under the light of a full moon when he caught sight of something unusual.

“It looked like a hole that was moving,” he says. He stared, perplexed, until he realized it was a female loggerhead turtle that had just laid its eggs and still had sand on its back. The turtle was nearly a meter long and likely weighed as much as a small motorcycle. “I immediately fell in love with it. … It just tugged at my heart.”

Sea turtles became an unexpected passion for Jones, who now often wears sea turtle T-shirts or Teenage Mutant Ninja Turtle (TMNT) garb instead of his old Florida Gators shirts. (The TMNTs aren’t sea turtles, but Jones’s link to the superheroes is irresistible: the human vigilante who fought alongside them was also named Casey Jones.) He began searching for ways to help conserve the reptiles, which is how he learned about a pervasive and preventable risk to their well-being: light pollution. Artificial bright lights are a deadly hazard that can lead sea turtles astray. Jones had found his mission.

Between March and November, sea turtles—including loggerheads, greens, leatherbacks, Kemp’s ridleys, and hawksbills—arrive at beaches in Florida, other regions in the southeastern United States, Mexico, and the Caribbean to lay their eggs in the dark and quiet of night. They use their flippers to dig holes in the sand where they deposit an average of 110 eggs.

Once the hatchlings emerge after about 60 days, they seek the ocean. David Godfrey, executive director of the Sea Turtle Conservancy (STC) in Gainesville, Florida, who works on sea turtle conservation separately from Jones, says that when it’s time to leave shore, sea turtles instinctively head toward the brightest area on the horizon, which is generally the water’s surface reflecting light from the stars and the moon. 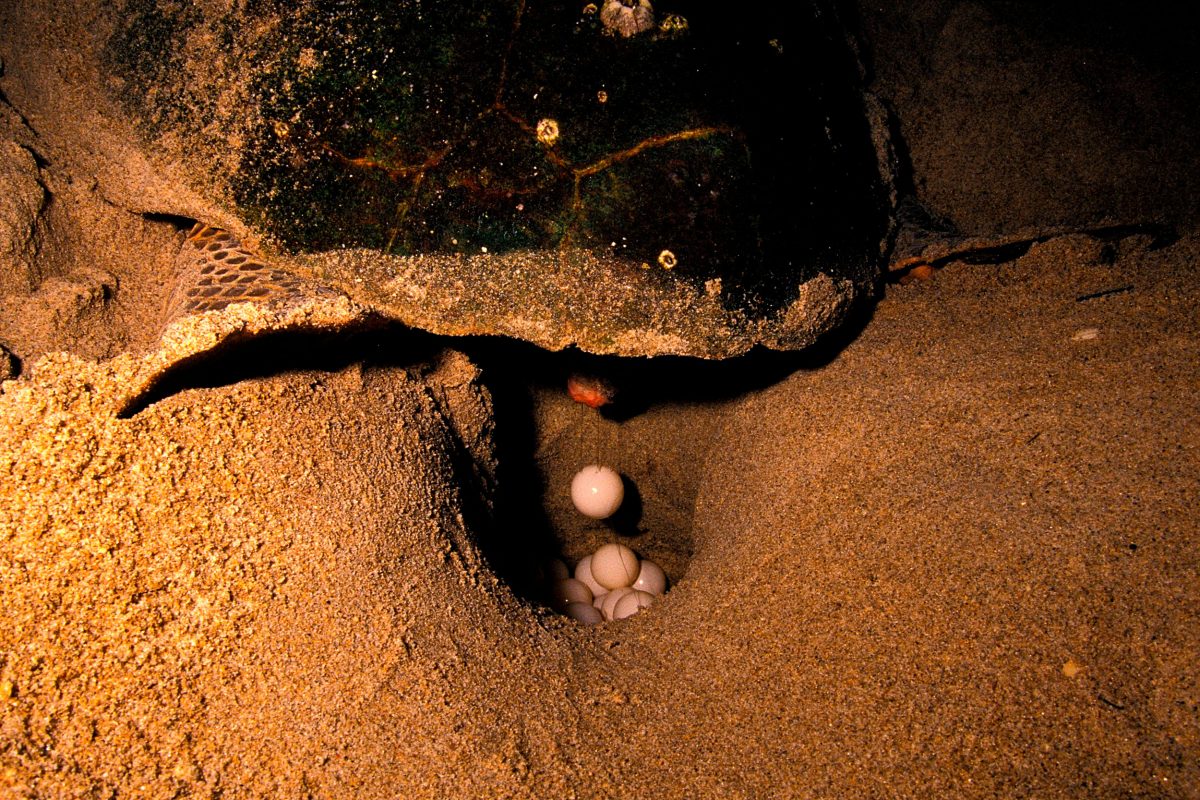 Yet when turtles become disoriented by artificial lights, they might head in the opposite direction, toward land. Hatchlings can end up in vulnerable places, from roadways to sand dunes to swimming pools. The longer they wander, the higher the chance they’ll be eaten by a coyote, raccoon, or other predator.

Bright lights can also deter a mother sea turtle from nesting. It may turn back and dump its eggs in the ocean, causing their demise. The embryos are sensitive to the salt water that invades their permeable shells and to the swishing of waves.

There are no precise statistics on how many sea turtles die after being affected by bright lights each year, Godfrey says. Yet in 2019, the Florida Fish and Wildlife Conservation Commission (FWC) compiled 2,689 reports of disorientation events in the state, meaning that some or all of the hatchlings from a nest emerged from their shells and went the wrong way. “Not all of these events are reported so that’s a minimum number,” Godfrey says. “It’s safe to say hundreds of thousands of hatchlings disorient each year in Florida alone.”

For sea turtle enthusiasts like Jones, a big frustration is knowing there are remedies for problematic lights, but individuals and communities aren’t always using them. One way to reduce impact is to change white or blue lights to low wattage amber, orange, or red LED lights. Fixtures can also be shielded and lowered, which keeps less light from reaching the beach’s surface. 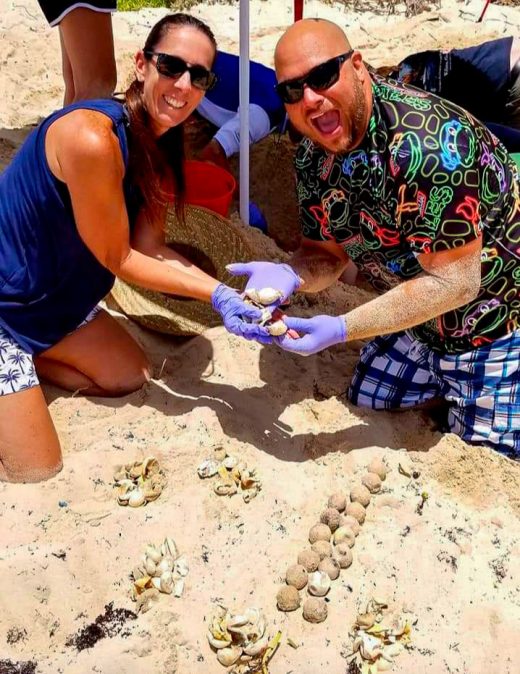 Debbie and Casey Jones excavate a green sea turtle nest after its eggs have hatched, to gather data. Photo courtesy of Casey Jones

When Jones became aware of the negative impact of light, he became a vigilante, appearing before municipal officials to ask them to establish sea turtle–friendly ordinances and knocking on people’s doors to ask them to turn off their lights. “I’m the muscle and the mouth,” he says. “I don’t care if you love me or you hate me. Just turn off your damn palm tree lights.”

In 2019, Jones noticed that Jacksonville Beach, the site of roughly 60 to 80 turtle nests each year, had problematic lighting in a beachfront parking lot. He launched a petition on change.org demanding that officials swap out bright LED lights for low wattage amber or red spectrum lights.

The petition quickly garnered more than 129,000 signatures, and in August 2019, Jacksonville Beach officials said they would correct public lights along the beach. On May 18, 2020, the city of about 23,500 approved turtle-friendly updates to its lighting ordinance. The new rules cover multiple measures for existing properties, new developments, and public areas, and stipulate that lights in public parking lots within 90 meters of a nest must be shielded, shaded, or turned off after 11 p.m.

Before his campaign in Jacksonville Beach, Jones had launched another petition drive in 2016 that asked Atlantic Beach, population 13,618, to make its lighting ordinance more sea turtle friendly. The petition drew nearly 118,000 signatures. As a result, the community, which has four kilometers of shoreline, adopted a new lighting ordinance that same year. Similar to Jacksonville Beach’s newly anointed rules, it specifies that new construction near the beach should have shields pointing down on outdoor lighting, that all lighting except security lights should be on the lowest setting at night, and that all windows with ocean views should be tinted or have coverings to obscure light at night, among other requirements. 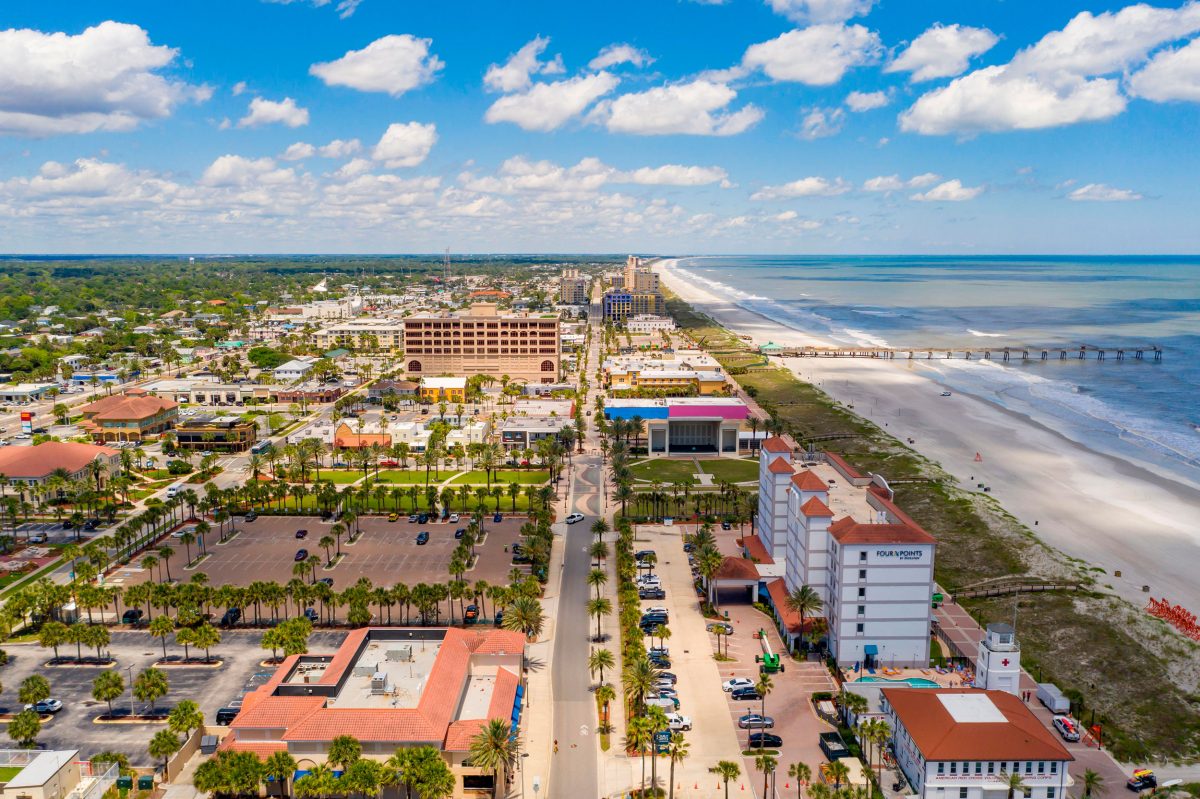 After receiving pressure from Jones and the public, the city of Jacksonville Beach, Florida, recently implemented changes to its lighting ordinance. Photo by Felix Mizioznikov/Alamy Stock Photo

Having regulations in place is a critical step toward protecting turtles from harmful lights—the other hurdle is convincing people to comply, Godfrey adds. “People don’t want to be told what to do,” he says. “It costs money to make the change. People are used to white lights and need convincing to make their outdoor lights amber or red. And some people care absolutely zero about sea turtles or other wildlife … .” Most coastal communities in Florida, where an estimated 90 percent of sea turtle nesting in the United States takes place, now stipulate that lights visible from the beach must be turtle friendly—but, Godfrey says, enforcement in places is “pretty weak” and many residents ignore the rules.

Godfrey’s organization works to convince residents and business owners near Florida beaches to change their ways. It used grants totaling US $10-million out of a settlement from the Deepwater Horizon oil rig explosion in 2010—which killed and had other negative impacts on an estimated 100,000 sea turtles—to provide lights and fixtures to about 200 properties, mostly large resorts or condo complexes.

The STC estimates that as a result of a lighting retrofit of 30 additional properties, mostly multifamily homes along the Florida Panhandle, at least 5,328 hatchlings were saved in the area in 2018 alone. Godfrey notes that the STC has enough funding to do retrofits on another 160 buildings over the next four years.

Kevin Hogencamp, deputy city manager in Atlantic Beach, says homeowners who violate the lighting rules in his community can face fines of up to US $500 per day, but enforcement officers first work with the residents to correct the issues. The 250 or so beachfront property owners are cooperative, he says: “So far, everyone we’ve had to confront about possible violations of the ordinance has complied.” 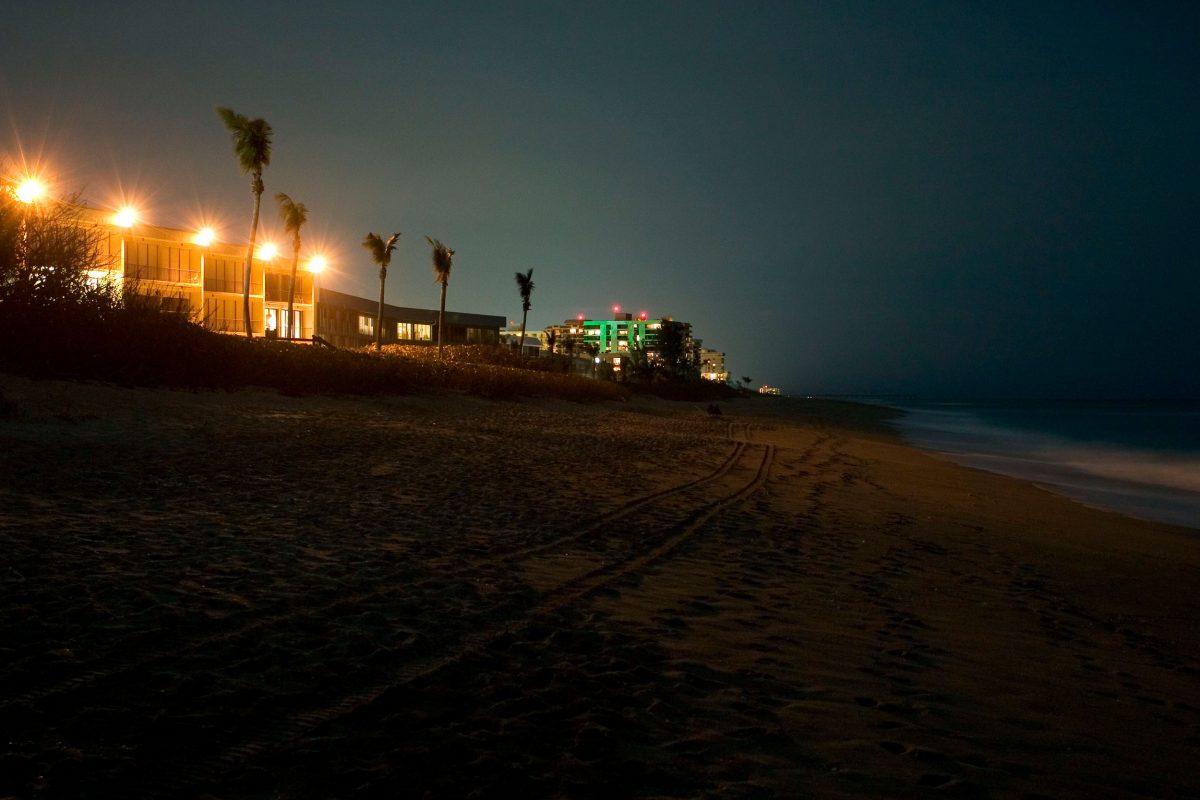 Bright lights, whether from big sources like condominiums or small sources like cellphones, can be hazardous to nesting turtles and hatchlings. Photo by Chris Johnson/Alamy Stock Photo

As part of his sea turtle preservation efforts, Jones founded an informal group of 15 to 20 volunteers in 2016 called Florida Sea Turtle Watch. The team reports lighting violations in northern Florida. “They walk the beach and call me if they see a lighting violation. They take a picture of it, send it to me, and I call it in,” Jones says.

Jennifer Burns is the director of Beaches Sea Turtle Patrol, which monitors sea turtle nests in Atlantic Beach, Jacksonville Beach, and Neptune Beach, and also reports lighting violations to officials in those communities. She believes the movement to turtle-friendly lighting is having a positive impact; 2019 was a record year for nests on the beaches she helps monitor. Her team counted 116 nests compared to 105 in 2012. Two were from greens and the rest belonged to loggerheads.

While there is no state level mandate requiring that communities adopt turtle-friendly lighting, the FWC provides a model ordinance that local governments can use as a guide, says Robbin Trindell, biological administrator at the commission. Though lighting ordinances focus on buildings and city infrastructure, even small lights can be disruptive to sea turtles, she notes. “We’re having a real challenge now because everyone has lights on their cellphones,” she says. “People complain that the beaches look like highways.” 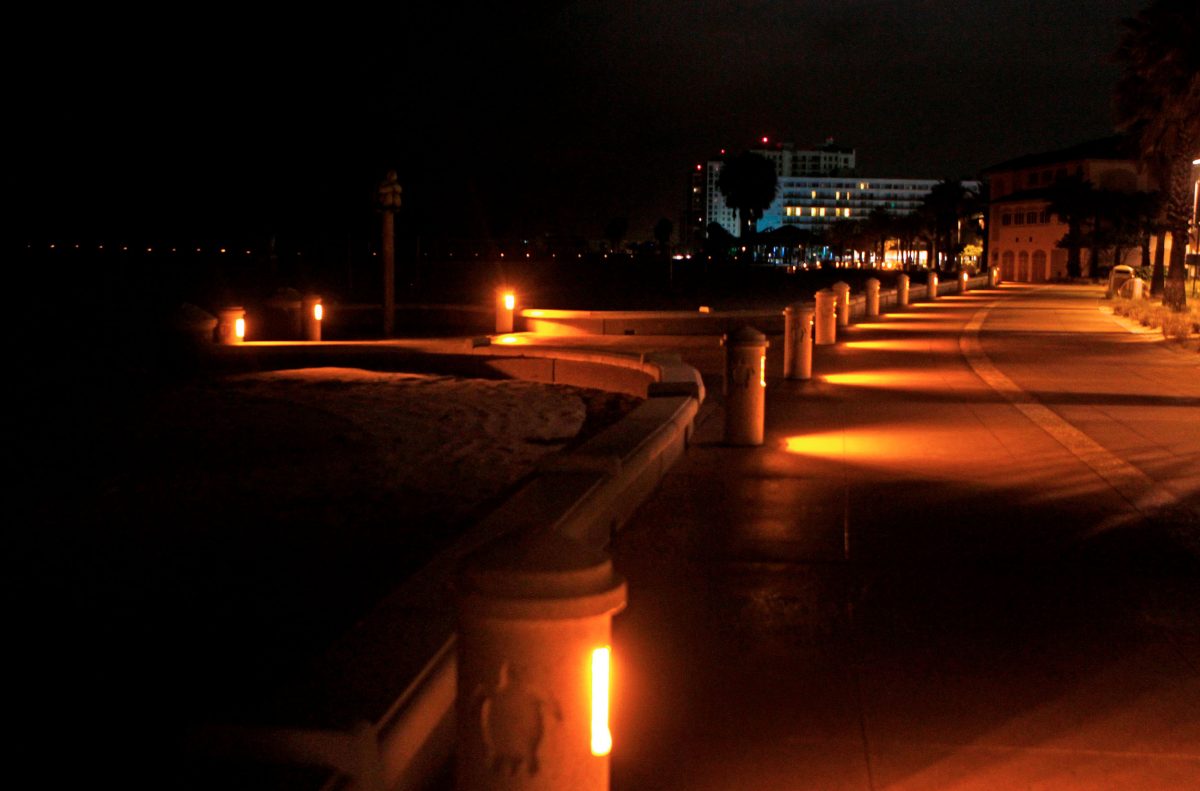 Creating awareness of the negative impact of bright lights on sea turtles, whatever their source, is an ongoing challenge, but Trindell credits Jones for helping bring the issue to the fore. “Casey is very passionate and he’s found a way to make a difference,” she says.

Godfrey hopes others will be motivated by people like Jones to persuade municipal officials to make their communities less harmful to sea turtles. While many officials are doing a good job, he notes, sometimes “you have to convince your local officials that it’s the right thing to do and that it won’t be a major inconvenience to people in terms of cost, safety, and effort.” He adds: “It also doesn’t hurt to remind elected officials that sea turtles are federally protected. If their lack of control of lighting is killing sea turtles, then they could be sued under the US Endangered Species Act.”

Jones, who got married two years ago, says he’s proud to be a sea turtle advocate. His wife, Debbie Jones, doesn’t mind sharing his affection—she’s just as enamored with sea turtles. She helps out by writing talking points for Jones before he appears before officials and asks them to please, for the sake of sea turtles, turn down the lights.

1. At the community level
Successfully advocating for sea turtle safety requires clear communication, Jones says: when talking to city officials or writing a petition, be sure to describe the problem, explain why it’s a problem, and provide specific ideas for how to fix it.

2. In beach-adjacent properties
Replace high intensity lighting with the lowest wattage amber, orange, or red LED lights possible; point lights away from the beach, keep them low, and/or add shields; plant a vegetation border to help block light from the beach; minimize the impacts of interior lights with window tint or coverings.

3. On the beach
Turn off all unnecessary lights, even glowing cellphones and flashlights, and, if you see a turtle, stay at least 15 meters away.