Cetacea Lab—a 24/7 lab dedicated to researching whales—is perched on Whale Point, at the southern end of Gil Island off the coast of British Columbia. Photo by Michael Scholl/Save Our Seas Foundation

The steady hiss from the speakers is broken by a long, clear call. Hermann Meuter spins his chair around to a tall bank of acoustic equipment, slips on a pair of headphones, and taps a button to start recording. Janie Wray turns from her computer to look toward the source of the sound—not up at the speakers mounted on the wall but out the window to the white-capped sea.

The first notes have the mellow resonance of a saxophone in a rainy alleyway: a smooth slide up an octave, and then a descending minor arpeggio laid over the echo. The same call again, this time with an extra riff on the descent. A second voice adds a deep grumbling that sets the floor of the lab vibrating. For the next 45 minutes, the two whales sing together.

Humpback whale songs are among the most complex, and least understood, acoustic displays in the animal kingdom. All cetaceans are vocal to some degree, and humpbacks have a wide range of feeding and social calls. The seasonal singing of male humpbacks, however, is of an entirely different order: complex, highly structured, and precisely repeated arrangements of calls, from deep grumbles to fluting trills.

Since the 1950s, when an American navy engineer using underwater microphones to listen for submarines made the first serendipitous recording of humpback songs, the calls have captured the attention of scientists and the imagination of listeners. The 1970 album Songs of the Humpback Whale broke sales records, helped galvanize a worldwide movement to end the commercial whale hunt, and launched a then 10-year-old Wray into a lifetime of whale research. “I played that over and over again,” she says. “It was my first experience of being emotionally moved by a sound.”

Exactly how and why the whales sing is still a mystery. So is the means by which the song is composed and shared across whale populations such that in any given breeding season, whales as far apart as Mexico, Hawaii, Japan, and the Philippines are singing essentially the same song—and each year it is a different song. 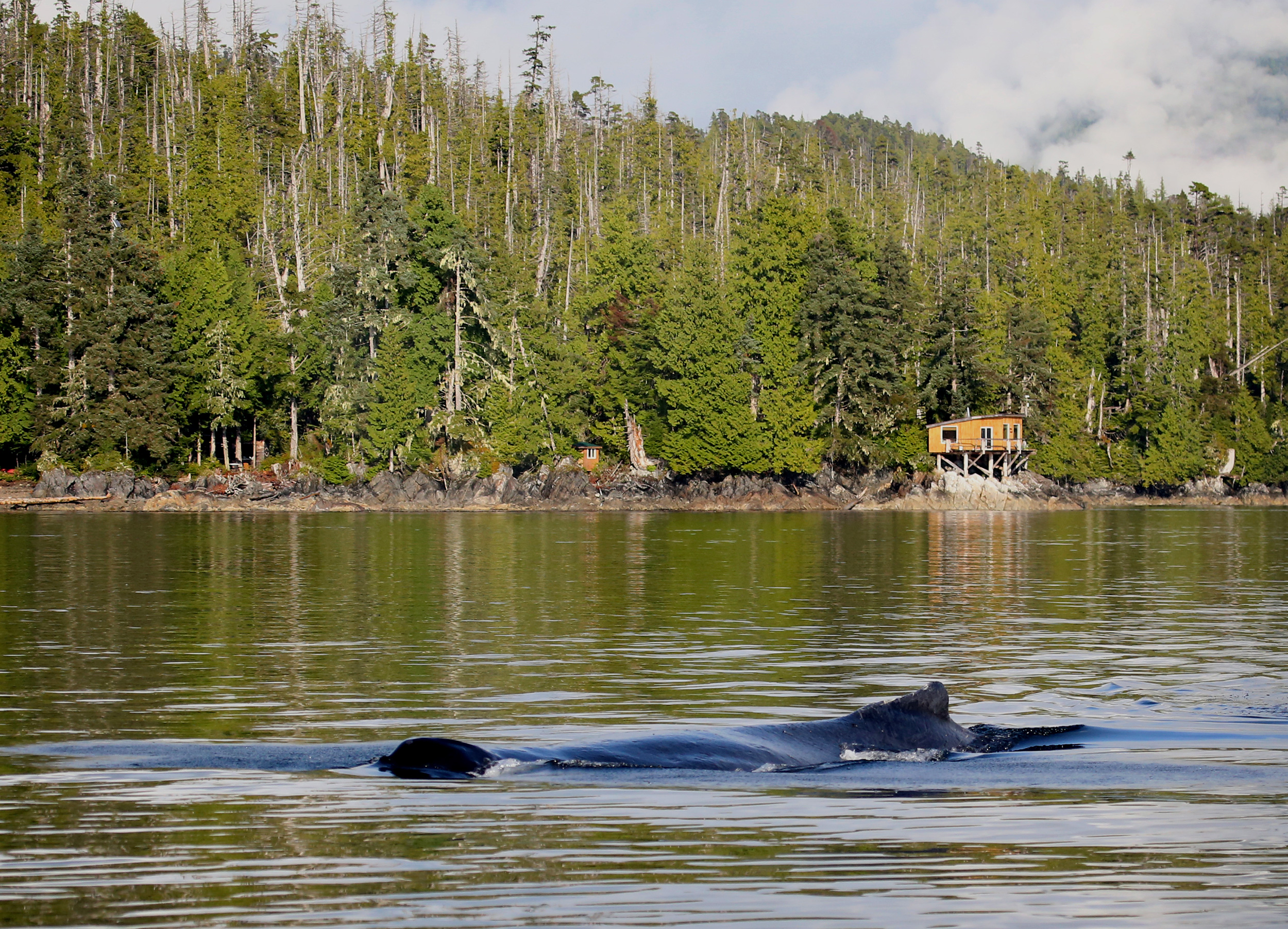 Researchers Janie Wray and Hermann Meuter are devoted listeners to the whales that visit Caamaño Sound. A network of hydrophones continuously transmits signals to the lab. Photo courtesy of Cetacea Lab

In their feeding grounds in Alaska and British Columbia, male humpbacks begin singing in the fall, a few weeks before they begin their southward migration to breed. The whales around Caamaño Sound, on British Columbia’s remote north coast, have a rare, and devoted, terrestrial audience. Wray and her research partner Meuter—who traces his own fascination with whales back to his attempt at age five to grasp the idea of sharing the planet with creatures so large—arrived in this area in 2000. Together with the Gitga’at First Nation, Wray and Meuter cofounded Cetacea Lab, a whale research station perched on the rugged shore of Gil Island in the heart of the Great Bear coast. They have had their ears to the sea ever since.

Cetacea Lab gets its power from a nearby creek, its groceries by ferry from Prince Rupert, and its seasonal research interns from around the world. Its nearest neighbor is the Gitga’at community of Hartley Bay, an hour away by boat; Vancouver is over 600 kilometers to the south. For the past 15 years, Wray and Meuter have constituted the entire resident human population of Gil Island. 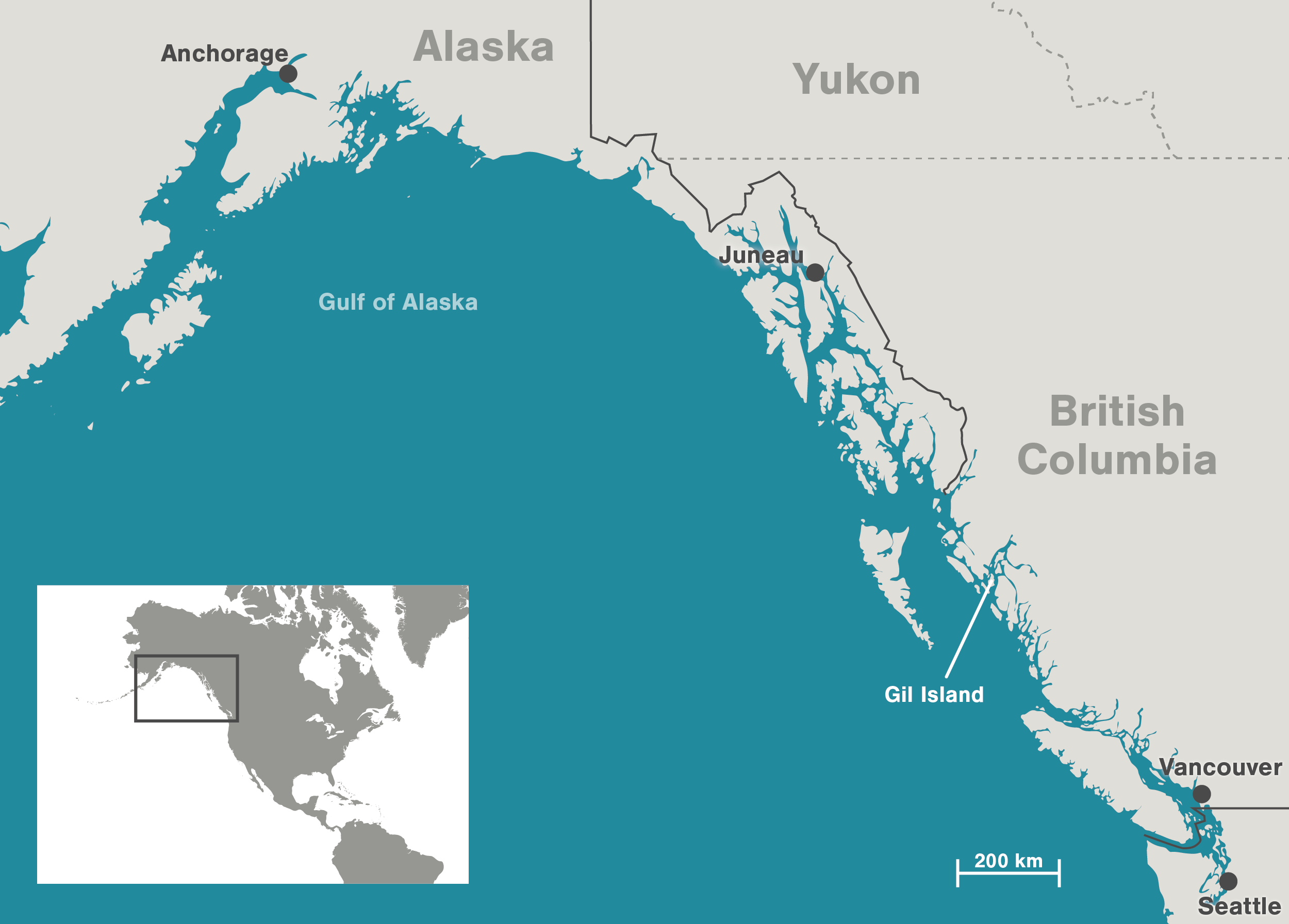 Through methodical surveys at sea and from the compact plywood-and-driftwood observation lab that serves as their center of operations, the two study the feeding and social behavior of this region’s resurging population of humpback whales. They also keep at least one ear turned day and night to the underwater soundscape. A network of hydrophones transmits signals to the lab, to a sound system in the house tucked farther back in the forest, and to portable speakers strung like lanterns in the trees—creating unlikely duets as the haunting calls of whales mix with the chatter of ravens along the forest trails. “We are listening in the kitchen, in the bedrooms. Everywhere except the toilet,” says Meuter. “And that’s coming,” laughs Wray.

The whales begin to arrive in the early spring, skinny from their months of fasting through the breeding season and their long migration. “June and July, we’re listening to feeding calls from sunrise to sunset,” says Wray. Through the summer, the feeding frenzy relaxes and the lab notebooks show scribbled attempts to capture the nuances of social calls. Gruuup? Bloop. Grumbly rawkkk. In October, the jotted lists of dates and recording times gain new embellishments: stars, exclamation marks, and occasionally a cluster of hearts. Song practice! Beautiful … Singing—amazing echoes!!! Into full song. Clear, resonant. Wow!!

“It’s pretty amazing to listen to,” Wray says. “One whale will start up, maybe with just a simple up and down: ‘dii doo, dii doo’; then ‘dii doo-DIP, dii-doo DIP, dii doo-DIP diidoo.’ He’s just playing around, changing one bit or another. Then another whale will pipe in. That whale will maybe just add a ‘woop,’ but the timing will be like ‘diiwoopDIPdiidoo.’” She waves her arms to the beat. “Two or three whales will do this together. Like musicians jamming, it’s all kind of random and then suddenly it’s a song.” 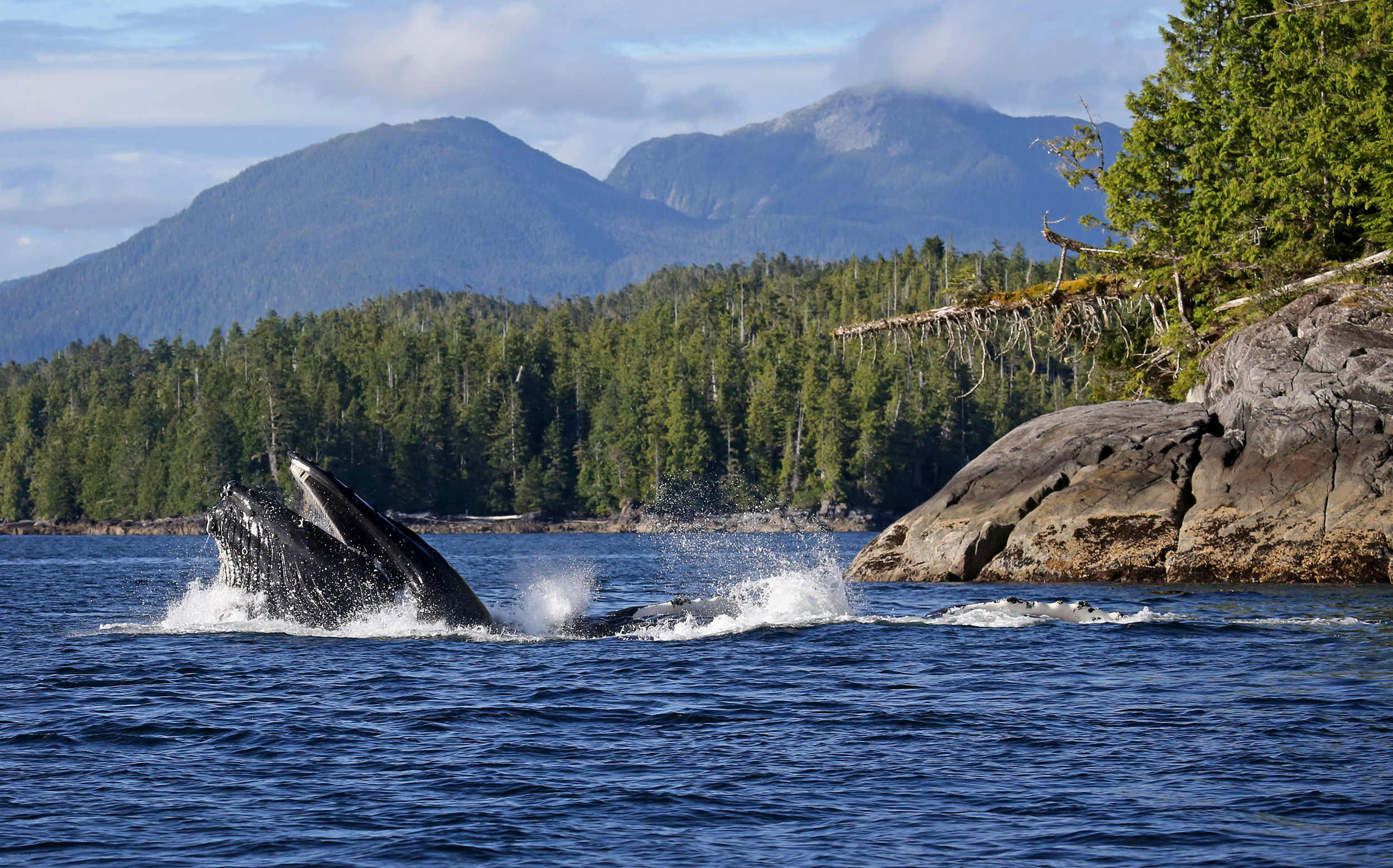 Humpback whales breaching is a common sight in Caamaño Sound, off the British Columbia coast. Photo courtesy of Cetacea Lab

In many parts of the world, whale songs compete with the ruckus of human industry. But this stretch of wild coast includes some of the quietest waters in the northeast Pacific Ocean, and many of Cetacea Lab’s recordings capture no boat noise at all. The narrow channels are also lined with steep rock faces that generate clear, strong echoes. “It would be like singing in the bathtub,” says Meuter.

Wray and Meuter believe that all of these features are important to the whales and hope that their research will help make the case to establish protected areas and acoustic refuges around Caamaño Sound. As humpbacks concentrate here in the fall, they mix, mingle, and sing in shifting combinations—like musicians dropping into one another’s studios. Then they split up, taking their songs on the road to different breeding grounds around the North Pacific. “It’s not one whale teaching another,” notes Wray. “It’s co-creation. Maybe they all have the same song because they have worked on it together already.”

Long after the whale song ends, Wray is still looking out to sea. “There is so much we don’t know. And that’s what makes it so exciting.” Then she smiles conspiratorially. “But really, I just still love listening to whales.”