Gulls were one of Moynihan’s favorite research subjects, and he filled his field books with detailed notes and sketches on their behavior. Background photo by Michael Nolan/robertharding/Corbis. Notebook image courtesy of Smithsonian Institution Archives

Everything about them is beautiful. Martin Humphrey Moynihan’s field notes, illuminated with marvelous drawings and inventive symbols, leap off the page. Moynihan (1928-1996), an expert on animal behavior and founding director of the Smithsonian Tropical Research Institute (STRI) in Panama, was known for his distinctive, original pencil sketches, and pen-and-ink renderings of birds, primates, and cephalopods. Portraying three disparate groups all known for their complex social interactions, showing behaviors ranging from squids somersaulting to monkeys arch-posturing, Moynihan managed to produce field notes with superb composition, engaging sketches, and splendid handwriting.

Moynihan grew up in Chicago and traveled extensively in Europe as a youth, becoming fluent in French. His secondary education at Horace Mann School in New York City, along with visits to the American Museum of Natural History, led to his interest in birds. After graduating from Princeton University in 1950 (having interrupted his schooling for army service in Korea), and earning a PhD from Oxford in 1953, Moynihan studied gulls from Canada to Ecuador. In 1957, he became resident naturalist on Barro Colorado Island in the Panama Canal’s Gatun Lake, transitioning to director in 1966 when the island’s facilities were consolidated as the STRI. He played a critical role over the next 17 years, developing it into a world-renowned research center.

In 1973, Moynihan retired to Albi, France. His Panama notebooks, however, stayed behind at STRI, until shipped to the Smithsonian Institution Archives a few years ago. To date, two volumes of Moynihan’s extensive records have been made accessible online by the Field Book Project, a joint undertaking of the Archives and Smithsonian Libraries. Moynihan’s field notes stand out. “To find such consistently lovely field notes is unusual,” says Lesley Parilla, database manager and principal cataloger for the Field Book Project. “His hatch marks noting vocalization patterns remind me of Persian rug fringe. His handwriting is superb. He has a very strong sense of the visual.” Using ovals at various tilts to represent the angles of animal posture, and creative abbreviations for behaviors ranging from mutual chattering to head bobbing to fish carrying, Moynihan offers layer on layer of pictorial feast and observation.

Avian ecologist Dr. David Whitacre, former senior research scientist for The Peregrine Fund with ongoing studies in tropical birds, finds Moynihan’s field notes exemplary both technically and aesthetically. “The detailed sketches of postures and behaviors are an indispensable part of his field notes,” says Whitacre. Moynihan’s many abbreviations and symbols allowed him to work quickly to record dozens of behaviors and vocalizations that often occurred in rapid, meaningful sequence. “The notes serve as an exquisite example of the power of meticulous observation and description of the nuances of animal behavior,” says Whitacre. Early field ecologists like Moynihan achieved great things armed only with binoculars, a spotting scope, notebook, and pencil. 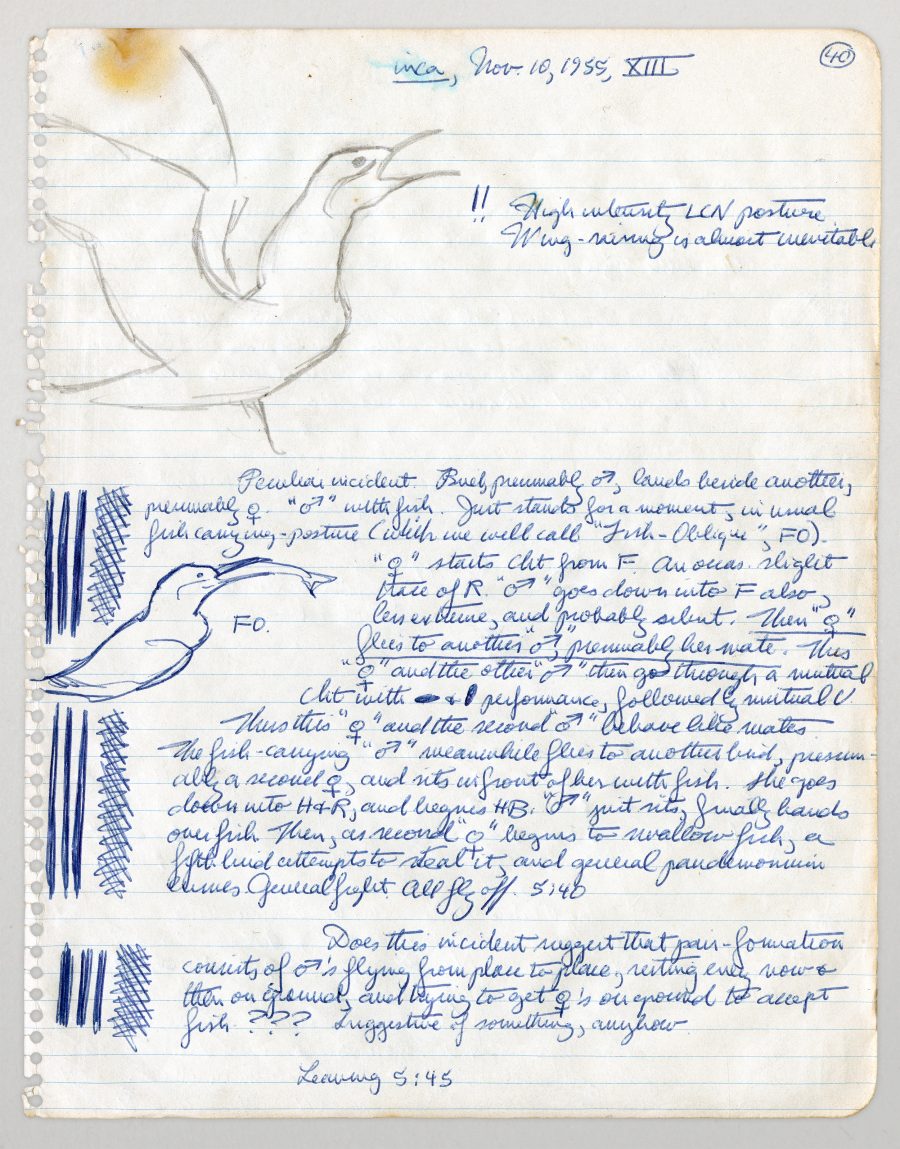 On this page Moynihan refers to “LCN posture,” noted elsewhere in his pages as accompanying vocalization, which he describes as sounding like a “creaking rusty hinge.” Moynihan also describes a peculiar incident in which a male flies from place to place carrying a fish, resting every now and then, trying to get a female to the ground to accept the fish. Moynihan speculates the sequence of actions is part of “pair-formation” behavior, adding that it is “suggestive of something, anyhow.” Image courtesy of Smithsonian Institution Archives 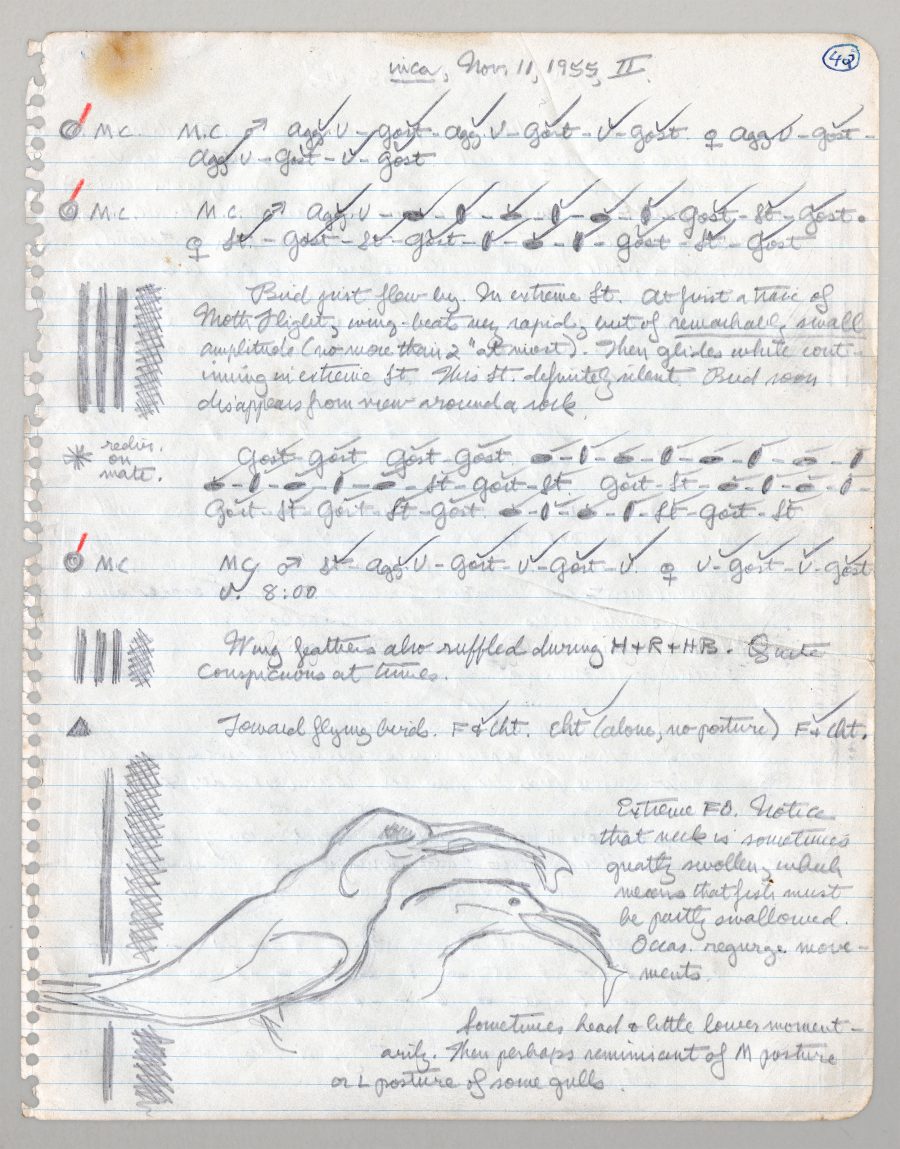 Abbreviations abound in Moynihan’s field notes. With a few exceptions, the abbreviations are assigned to various postures assumed by the gulls. One posture is noted as “Gost” for “Goethe Stellung” or “Goethe Stance,” a term Moynihan uses frequently that refers to an arched-neck, fluffed-back gull’s threat posture described in 1963 by gull behaviorist Dr. Friedrich Goethe. Image courtesy of Smithsonian Institution Archives 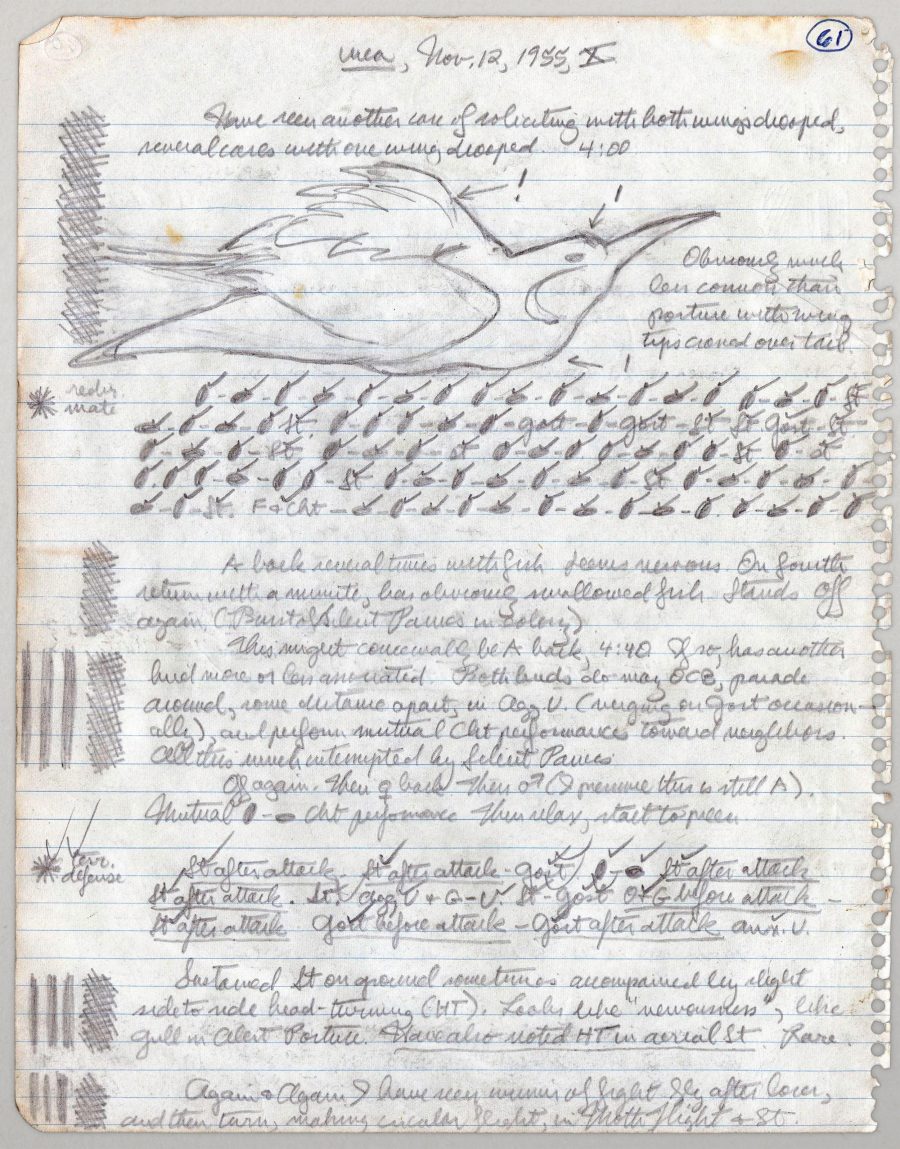 Here Moynihan refers to “another case of soliciting with both wings drooped, several cases with one wing drooped,” in which the gull is soliciting either food or copulation. Image courtesy of Smithsonian Institution Archives