Varieties of Pokkali rice–named for the cultivation method—are uniquely adapted to survive in coastal regions of India that are often inundated by salt water. Photo courtesy of Deepa Krishnan of Magic Tours of India

For years, the paddy fields of Ezhikkara, a coastal village in the southern state of Kerala, India, were in a state of neglect. A lack of resources and a loss of enthusiasm had led villagers to abandon crops on the field. But, as a growing number of scientists and farming advocates look to traditional rice varieties in the search for climate-resilient food, that narrative has begun to change. And on a bright October day in 2014, a group of 300 people traveled from other parts of the state to join villagers in a harvest festival aimed at breathing life back into a cultivation method that originated centuries ago. The harvesters, many with sickles in hand, shined light on a type of crop in strong need of supporters: Pokkali rice.

“Pokkali” is the all-encompassing term that refers to the salt-tolerant rice varieties grown by the Pokkali method of cultivation, in which farmers alternate raising rice with prawns and shrimp, and sometimes fish. The unique method of paddy cultivation is specific to parts of central Kerala where it’s practiced in tidal wetlands. In Malayalam, the local language, pokkam means height and ali means flame, explains K. G. Padmakumar, director of the International Research and Training Centre for Below Sea Level Farming in Kerala.

True to their name, Pokkali varieties grow up to two meters. It’s their ability to stand tall above brackish waters that has piqued the world’s interest in how they may be a uniquely climate-adaptive food.

Pokkali fields are prepared for rice in April, before the onset of monsoon. Farmers pack the saline soil into large mounds, leaving the rains to wash off much of the salt. Rice seeds sprouted in baskets lined with teak or banana leaves are then sown on these mounds, turning them into in situ nurseries. Once the seedlings reach a desired height, farmers dismantle the mounds and transplant the seedlings throughout the fields, where they flourish in the inundated lands. When the rice is ready for harvest in September or October, only the panicles (the terminal part of the grain-bearing branch) are separated. The rest of the plant is left behind for the next phase—cultivating prawns and shrimp. Farmers regulate tidal water using sluices, trapping whatever shrimp and prawn larvae enter the fields, raising and harvesting them until March, and then selling them in local markets to gain extra income. Along with the nutrients brought in by the sea, these crustaceans enrich the Pokkali fields with their excrement. The process, explains Padmakumar, allows the rice to grow in a naturally organic environment. 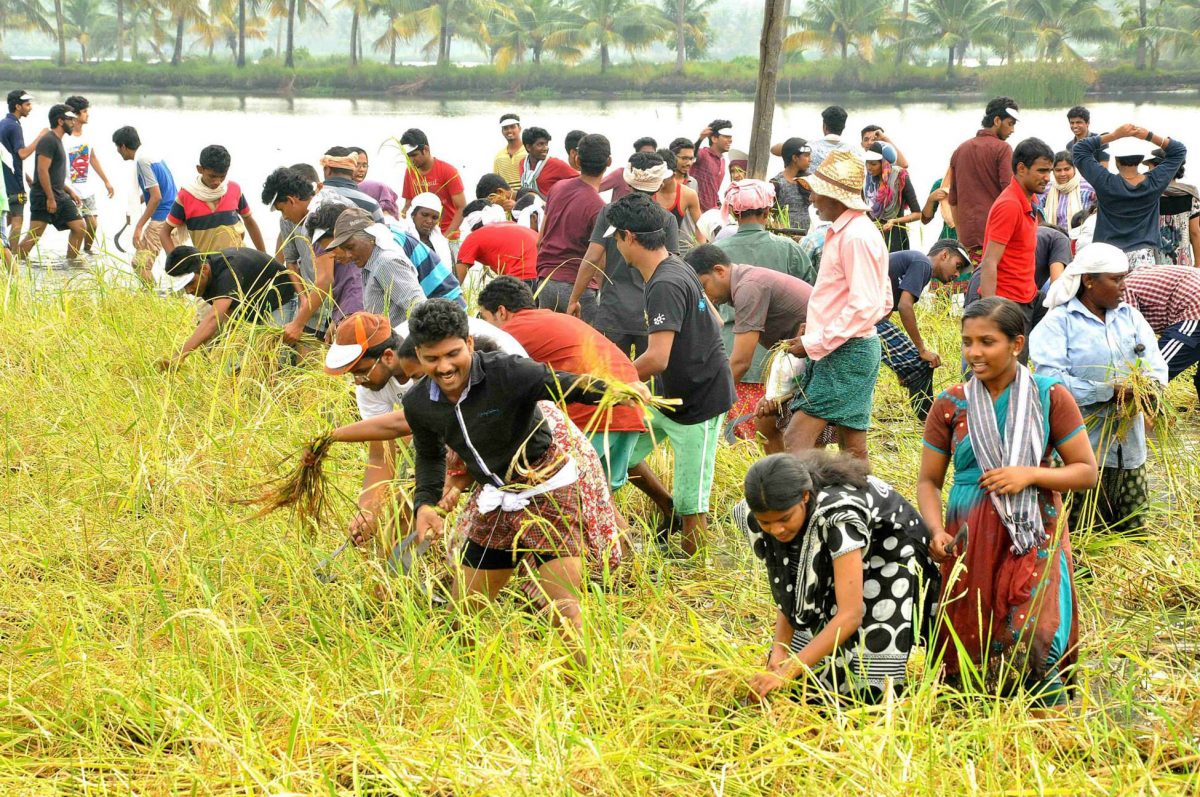 To raise awareness about Pokkali rice and its history and cultivation, tour companies have been linking tourists and local villagers through harvest festivals. Photo courtesy of Blue Yonder

Across India, rice is a vital grain, and, between January 2020 and April 2021, the country consumed 106.5 million tonnes of rice—the second-highest amount in the world. Rich in protein and antioxidants, Pokkali rices are celebrated for their nutritional value; it’s been said that fishers can spend hours at sea after a Pokkali-heavy meal. Larger than many other types of rice, Pokkali varieties have a distinct taste and retain their reddish hue even when cooked. Proponents love to talk about how seamlessly the auburn grains can be incorporated into meals—prepared as rice or transformed into one of many regional staples, such as dosas (savory crepes), puttu (steamed ground rice with coconut), kanji (thin porridge), or idiyappam (rice noodles).

In recent years, however, the zeal for this cultivation method has dwindled. About three decades ago, the cultivation was prevalent across 25,000 hectares of land; now, Pokkali rices grow on as few as 5,000 hectares. Pokkali fields have given way to the cultivation of other crops, such as coconut, and to the frenzy of urbanization. Pollution of wetlands and abandonment of the practice have added to Pokkali’s woes.

That abandonment is partly due to Pokkali’s relatively small returns. Yields for traditional varieties of Pokkali rices are about one and a half tonnes per hectare, whereas regular high-yielding rice varieties provide as much as four to five tonnes per hectare, sometimes more depending on the cultivar. “Pokkali yields are low, and they often don’t justify the production costs,” says Akhil Soman of the Palliyakkal Service Co-operative Bank. The bank has stepped in to help farmers—with everything from purchasing seeds to securing loans, hiring laborers, and, come harvest season, buying the rice at a fixed guaranteed price—ensuring that they get the necessary support to keep the cultivation going. 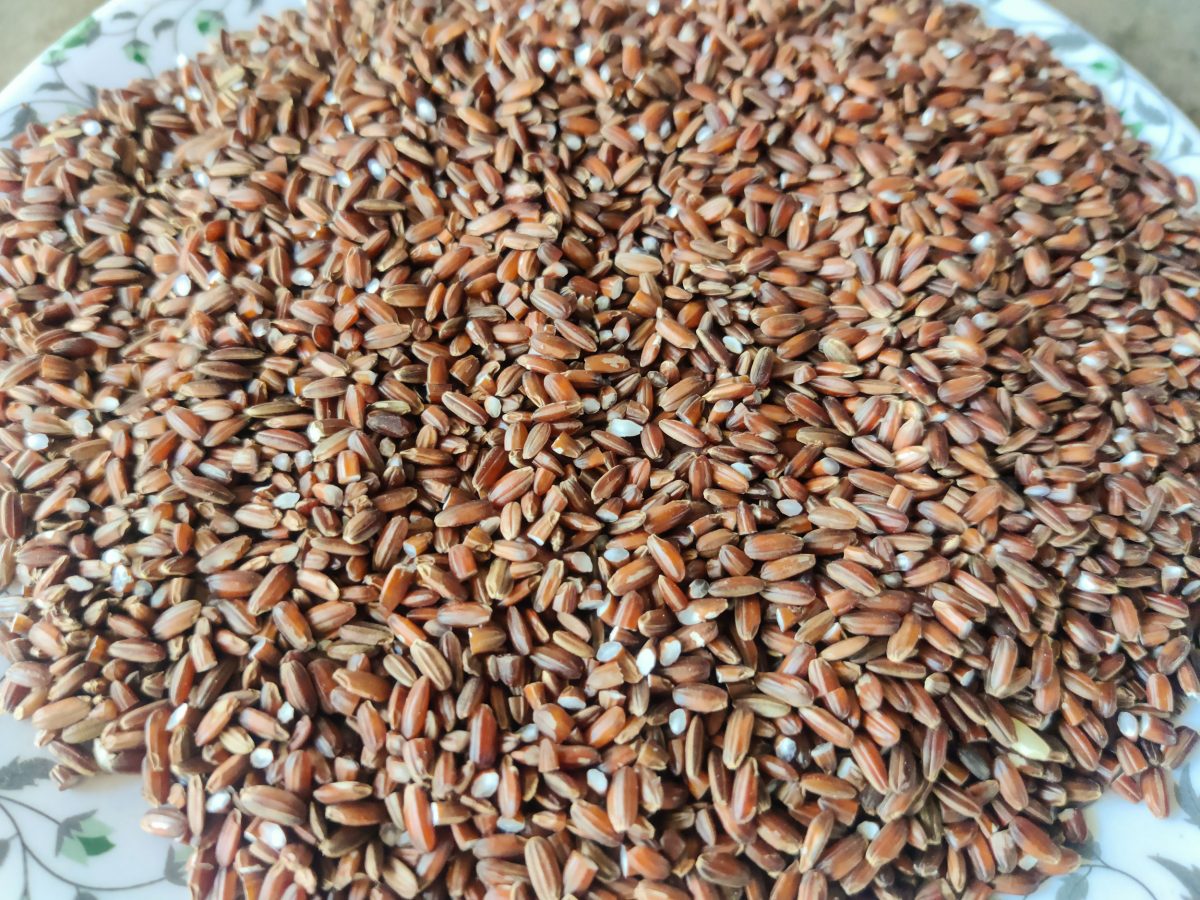 Grains of Pokkali rice, recognizable because of the rusty-red hue and the robust size, are used whole or ground in many traditional Indian dishes. Photo courtesy of Deepa Krishnan of Magic Tours of India

Yet despite the bank’s efforts, many farmers are using their fields solely to raise crustaceans. They’ve stocked tiger prawn seeds from hatcheries to cultivate the fast-growing animals in their fields, says Padmakumar. That change has tipped the paddies’ natural cycle and led to a loss of biodiversity. But another big factor that keeps farmers from growing Pokkali is the sheer back-breaking work of harvesting the rice by hand and the difficulty in finding labor to do it. “We stand in flooded fields, sometimes with water up to our chest levels to harvest Pokkali,” says K. A. Thomas, a farmer from the Kadamakkudy islands in Kerala. “We wish there was some mechanized way to do it.” The reality of waterlogged fields, however, makes this challenging.

According to local lore, the story of Pokkali rice dates back to the 14th century, when the mighty Periyar River flooded, washing rice seeds from the mountains of the Western Ghats into saline coastal lands. There, the rice thrived. Over time, farmers took to the newly sprung varieties, which grew tall, developing the plants with the cultivation method that would eventually define them.

If one flood brought Pokkali to life, another catapulted it to significance. In 2018, devastating floods ravaged Kerala’s agricultural lands. Following the floods, heroic accounts of Pokkali plants resisting nature’s fury were reported in the media. “The bunds and sluices in my farm were destroyed, but the paddy thrived,” says Thomas. While fields in the Kadamakkudy islands of Kerala were moderately affected, a report by the Kerala State Biodiversity Board revealed that Pokkali yields were greatly reduced in parts of the state compared to previous years. Also, plants sown in Kadamakkudy after the flood became susceptible to disease. 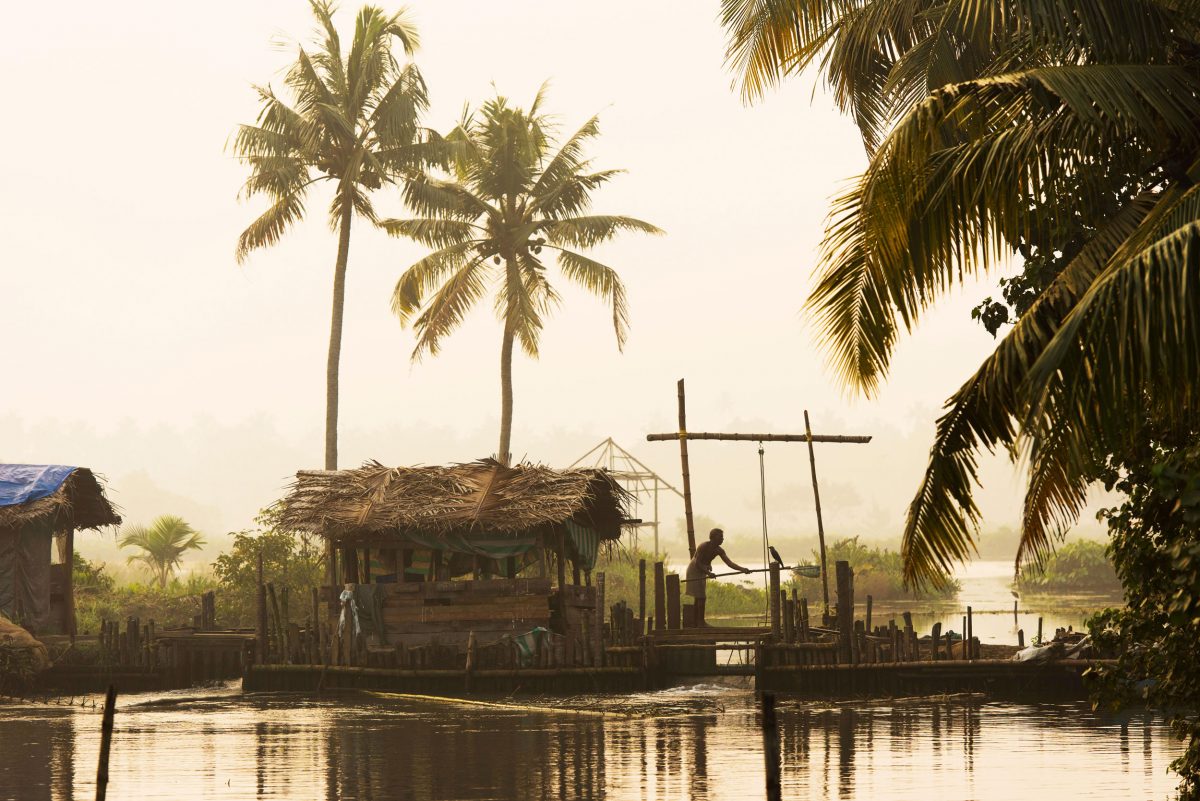 Farmers use sluices to regulate the water level in the Pokkali rice fields during the ebb and flow of the tides. Photo by imageBROKER/Alamy Stock Photo

While various existential threats imperil Pokkali cultivation, plant geneticists like K. V. Mohanan of the Gregor Mendel Foundation at the University of Calicut in Kerala emphasize its importance in the face of sea level rise, which will continue to make coastal areas saltier. This reality makes it paramount for scientists to develop, and farmers to invest in, salt-tolerant crops like Pokkali rice, Mohanan adds.

Researchers at Kerala Agricultural University’s Rice Research Station, Vyttila, located in the heart of Pokkali lands, are working on just that. A. K. Sreelatha, who heads the station, says Pokkali varieties have provided international researchers with a germ plasm for salt tolerance to aid the development of saline-resistant crops. There, scientists have bolstered the crop’s output by developing varieties that produce higher yields. Those efforts build on a success from 2008, when the university earned the rice a place on a national registry that recognizes its unique importance.

Outside of the lab, Pokkali champions are devising ways to spur interest in the rice. Sustainable travel initiatives like Blue Yonder, which mobilized agricultural enthusiasts to Ezhikkara in 2014, and Cochin Magic, of Magic Tours of India, have dedicated Pokkali field tours that benefit farmers and local community members and increase their participation in the practice. Deepa Krishnan, founder of Magic Tours of India, says that the tours help make Pokkali more appealing to locals, who have shied away from it in the past. Creating pride in Pokkali, Krishnan adds, is crucial to its continuation.

Though there is hope, Pokkali adherents fear that it may not be enough. “Only traditional farmers are involved in this cultivation,” explains Sreelatha. She wonders what will happen when the next generation of farmers enters the Pokkali fields. Her fear is palpable, but considering Pokkali’s track record of rising above hardships and the mounting support for it from various groups, more farmers may come to value the rice with time.