The Fukushima Daiichi Nuclear Power Plant was severely damaged by an earthquake and tsunami in 2011, leading to a meltdown. Ongoing efforts to keep the plant cool during cleanup have generated large volumes of water contaminated with radioactive elements, and this water may soon be released into the ocean. Photo by Richard Atrero de Guzman/AFLO/Alamy Live News

The word “Fukushima” has become known globally as shorthand for a nuclear disaster that happened at the Fukushima Daiichi Nuclear Power Plant on the coast of Japan in March 2011. The disaster at the plant—about three hours’ drive north of Tokyo on the shore of the Pacific Ocean—began with a Magnitude 9.0 earthquake and tsunami that flooded critical control equipment and triggered a meltdown. For nearly a decade, the plant’s workers have cooled the wreckage with water. Now the Tokyo Electric Power Company (TEPCO), the power plant’s owner, is facing a new problem: what to do with radioactive water piling up at the site.

Each reactor encloses rods of uranium pellets. Uranium is naturally radioactive and undergoes a process called fission—its atoms decay, or split, at a predictable rate, emitting neutrons and heat. In the reactor fuel, this natural ability is harnessed—neutrons collide with other uranium atoms and split them apart in a chain reaction. The resulting heat is used to boil water, which drives steam turbines and generates electricity. Nuclear reactors control fission rates by surrounding the fuel rods with “control rods” that absorb extra neutrons. To keep the fuel cooled and avoid overheating and meltdown, it is immersed in water. Before the quake, three of Fukushima’s six nuclear reactors were in use and operating smoothly to generate electricity.

Then the earthquake struck. The plant’s reactors withstood the damage but lost power. The subsequent tsunami flooded critical operating equipment, and the cooling systems stopped working, triggering a meltdown. Workers eventually contained the meltdown, but they’ve had to keep the smoldering site cool for nearly 10 years, pumping water into the ruined buildings. Now the plant has a huge volume of used radioactive water, and nowhere to put it.

We’ve unpacked this coastal conundrum with the help of marine chemist and oceanographer Jay Cullen at the University of Victoria, British Columbia.

This short animation shows the chain reaction of nuclear fission. As each atom splits, it emits neutrons which strike nearby atoms, splitting them in turn. Animation by Katrina Pyne

Why is water piling up at Fukushima?

When the reactors were damaged, their automatic shutdowns and safeguard systems failed, and so did the cooling systems. Fission sped up until the fuel’s temperature was hot enough to liquefy, and the rods began to literally melt down. Workers frantically pumped seawater directly over the broken reactors and exposed fuel, leaving highly radioactive water pooling in the buildings and seeping into the groundwater around the plant. “That process has continued since 2011,” says Cullen of the pumping. “The fuel is still warm and it still needs to be kept cool.”

While some of this water can be reused in cooling the hot reactors, some must be contained and stored after coming in contact with the reactors. “TEPCO … has used most of the plant site as a storage area [and has] built tanks to hold this water, because really they … don’t have any other option,” Cullen says. There are just over one million tonnes of water in the tanks as of 2020. TEPCO estimates the site will run out of room for new tanks by 2022, and the contaminated water keeps piling up.

What do we know about the radiation in the stockpiled water?

“When the fuel burns,” Cullen explains, “it produces radioactive elements in a predictable way and so [TEPCO has] a pretty clear picture of what elements are there.” The company says there are potentially up to 62 different radioactive elements in the wastewater, but names only a few, including carcinogenic cesium-137 and strontium-90. TEPCO said in 2018 that the levels of these isotopes in the tanks still exceeded safe limits, despite having gone through several “cleaning” steps. And to make any risk analysis trickier, TEPCO has been vague about the full list of radioactive elements still in the water.

How can the wastewater be treated or cleaned?

The collected wastewater is filtered through resin beads, which have an electrical charge that attracts radioactive isotopes, including cesium and strontium. The beads are then stored as standard radioactive waste.

Most of the water also goes through further processing, including an advanced liquid processing system (ALPS) that strips charged particles out of the water. ALPS doesn’t remove everything; it leaves an isotope of hydrogen called tritium in the water. Tritium is not known to be harmful to life, although the effects of large doses are untested. 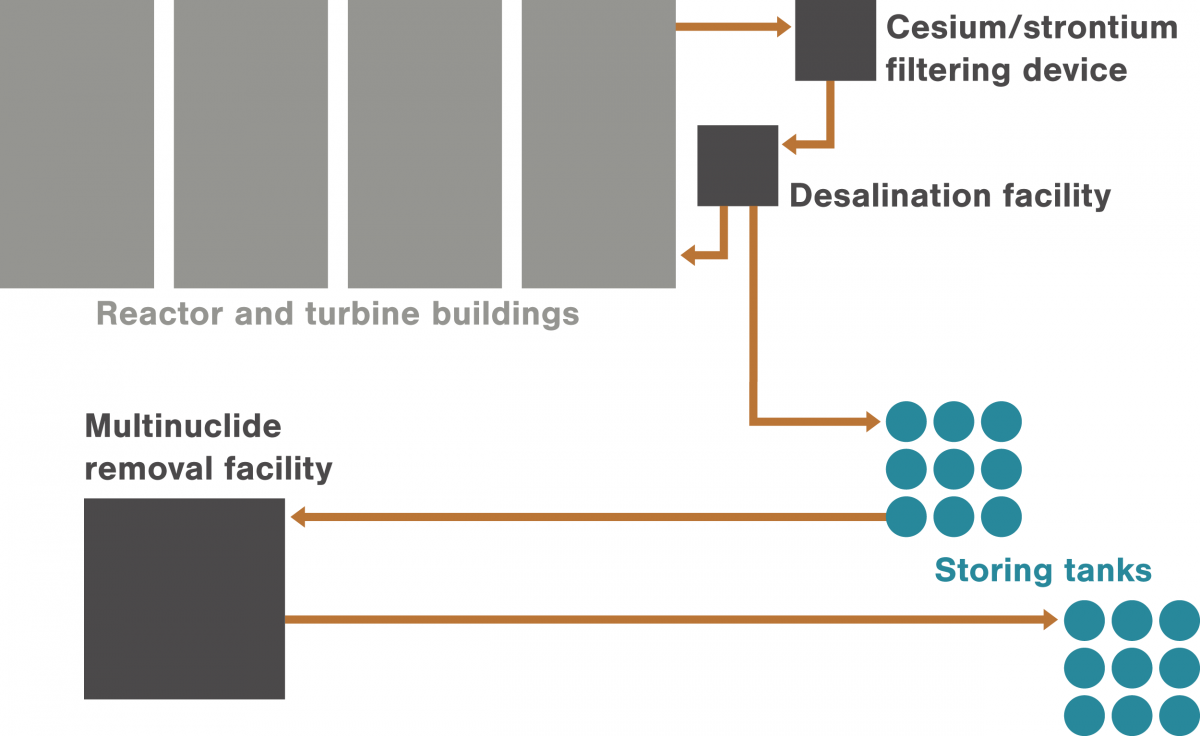 This schematic shows the current arrangement of facilities at the Fukushima Daiichi Nuclear Power Plant, including the damaged reactors, water treatment facilities, and storage tanks. Illustration by Mark Garrison (after a graphic from the Tokyo Electric Power Company)

What are the disposal options for this wastewater, and why is Japan considering the ocean?

Disposal options are very limited. Since dosage determines toxicity, any scheme must dilute the radioactive water as much as possible. An expert panel assembled to find solutions focused on two potential options: vaporizing the water and dispersing it into the atmosphere from a very tall stack, or dumping it in the ocean.

The expert panel advised the Japanese government in 2020 that ocean dumping was preferable. The International Atomic Energy Agency, the United Nations organization responsible for nuclear monitoring, agreed it was feasible. TEPCO says that if it receives approval, the water in the tanks would be released into the sea offshore Fukushima very slowly, over several decades. Cullen notes that there are risks to not dumping the water. “By storing on the site,” he says, “you risk potential uncontrolled release due to another natural disaster or human error.”

Who will oversee and monitor any release?

The United Nations International Maritime Organization administers the London Protocol, a 2006 agreement governing waste in the ocean, to which Japan is a signatory. The protocol prohibits all dumping of nuclear waste so Cullen says it’s unclear what legal options would permit the dumping, but monitoring before, during, and after any planned release would be critical.

If the water is dumped in the ocean, could it impact human or marine life?

There’s no way to test the impacts of ocean dumping ahead of time. The only way to anticipate the impacts is to look at studies of previous releases of radioactive material into the ocean, as well as studies of the effects radioactive isotopes have on the body.

The isotopes cesium-137 and strontium-90 can be harmful because they enter cells through the same pathways as the nutrients potassium and calcium. An organism could easily incorporate radioactive cesium or strontium into its body, as if it were a nutrient. These isotopes alone aren’t toxic, but their decay is. “When they decay, they generate free radicals,” Cullen says, referring to certain harmful forms of oxygen. “And those can attack important molecules, like DNA inside your cells, and cause problems in replication, and cause illnesses like cancer.”

Cesium can also biomagnify—increase in concentration as it moves through the food chain—to build up in top predators. A study has linked carbon isotopes in seals off the coast of Scotland, for instance, to material released from a nuclear waste disposal site at Sellafield, England. Measurements off the coast of Japan in 2011 identified radioactive cesium from the Fukushima incident throughout the food web, with higher levels in organisms closer to shore. Since the second quarter of 2015, cesium levels in all organisms have been well below Japan’s safety limits for human consumption, but the isotope has persisted.

The effects of dumping the water remain unknown. “Determining what the risk would be to the public and to the environment,” Cullen says, “could only be done if we knew exactly what was in the tanks. And at this point, we don’t.”

How have the public and other countries reacted?

Neighboring countries have expressed concern. South Korea, for one, has banned the import of seafood from Fukushima.

One key group opposing ocean dumping is Fukushima’s local fishers. “Their industry and their livelihoods have been basically destroyed by the disaster,” says Cullen. Following the nuclear meltdown, all exports of seafood from the area were halted. Since then, the fishers have slowly rebuilt their industry, with levels of any radioactive elements well below safe consumption levels. Dumping wastewater nearby could destroy this nascent progress.

Japan has been holding talks and evaluating options throughout 2020 and must soon announce its final decision on the wastewater’s fate. Every option carries risks. What is clear is that fishers, neighboring countries, and other stakeholders can only weigh these risks once they know how many radioactive particles, and of what types, are in the water.