In a bright land of snow, ice, and vast expanses of water, the Sun’s harsh glare can hurt or blind human eyes. Yup’ik hunters of the past, who paddled the coast of western Alaska in kayaks, crafted wooden hats, snow goggles, or visors—such as this one—as their solution.

The visor’s practical function would be familiar to golfers or accountants: to provide shade when the wearer is trying to focus on a detail, whether a tiny ball on a fairway, the fine print on an invoice, or the subtle signs of a seal. But Yup’ik visors had additional powers.

Aron Crowell, Alaska director at the Smithsonian Institution’s Arctic Studies Center, says the hunting visors were designed for ocean travel, shielding the eyes from rain or spray and the glare off the surface of the water. The concave brims collected sounds from across the water, funneling them toward the hunters’ ears and helping them detect subtle noises. And they could act as camouflage. “Many of them are explicitly kind of like masks,” Crowell says. “They will have eyes and a mouth.” The hunters could lean forward and display their animal faces. 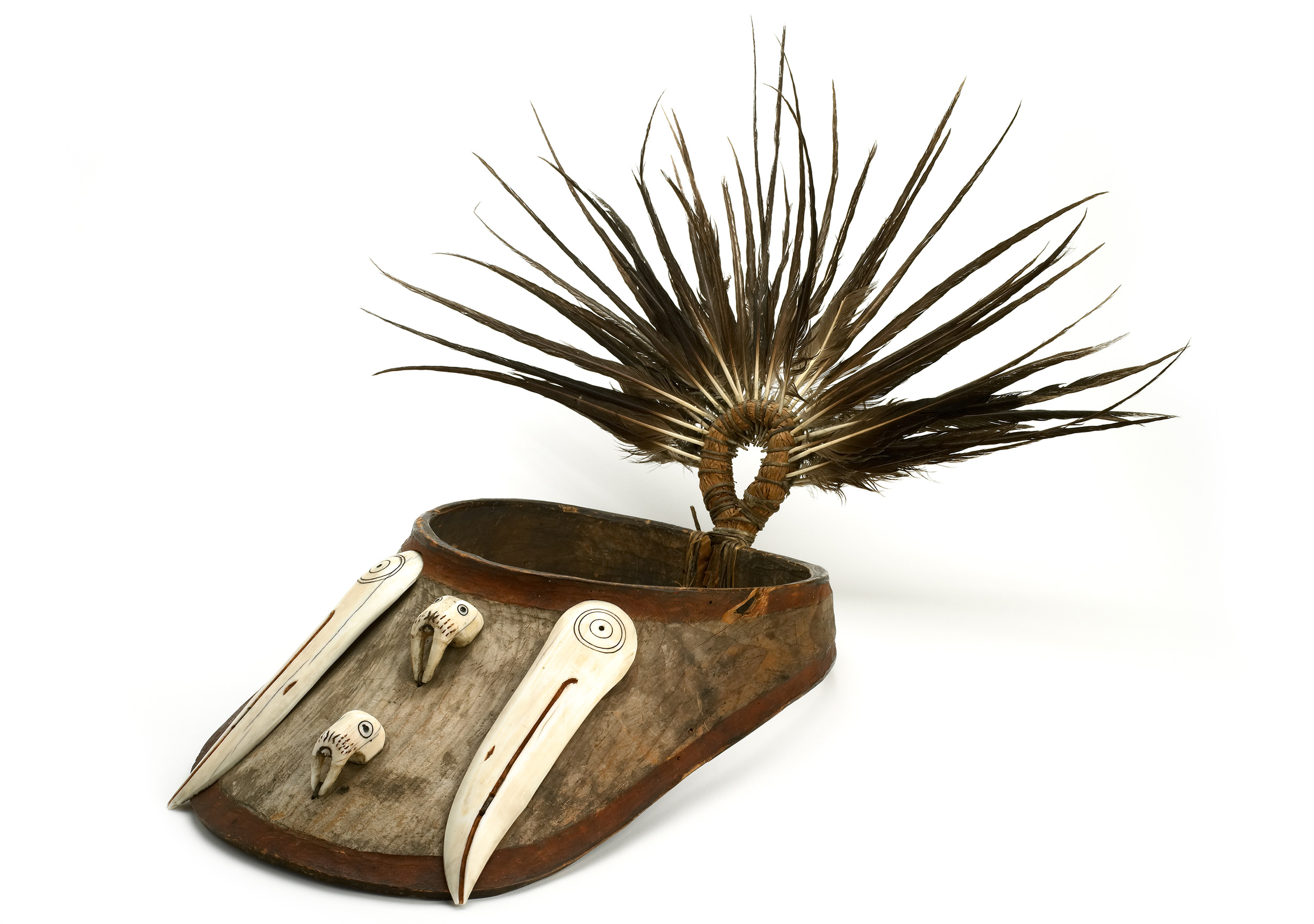 The visors had function outside of the hunt, too. “In a number of Alaskan cultures, these were very important cultural objects,” Crowell says. Like most clothing articles, hats and visors displayed the designs and materials of a particular place. Some were worn in hunting ceremonies.

Naturalist Edward W. Nelson acquired the visor shown here as he traveled through western Alaska by dogsled in 1879. He was seeking objects of interest for the US National Museum (now the National Museum of Natural History), and since he considered the visor a cultural specimen, not art, he didn’t note the name of the visor’s creator.

The unknown artist would have first carved a thin, horseshoe-shaped piece of wood, applied hot water or steam to soften it, and then bent the ends together to form a band. He (likely a man; Yup’ik elder John Phillip Sr. says only men typically made and used visors) then edged the visor with reddish paint, likely made from red ochre or alder bark. He also added a dramatic spray of duck feathers at the back, tied with a loop of grass, and threaded ivory hunting charms in the shape of small walrus and seagull heads to the brim. The eyes of the seagull carvings, with their concentric circles, represented the Yup’ik view of the cosmos: the human world surrounded by other worlds where animals dwell, including the sky and sea.

The Yup’ik made wooden hats and visors for at least 1,500 years, until the practice was disrupted by the colonial era. Today’s Yup’ik are rediscovering it, ascribing the visor yet another form of power in the process: cultural pride.