An artist’s rendering of a tsunami shows the dead and the surviving, including a woman who chose an opportune time to take a bath. Photo by Stephen Topfer/Art Gallery of Greater Victoria

“Woman rides out tsunami in her wooden bathtub. You won’t believe where she lands!” It sounds like clickbait, but it’s mid-June 1896, and throughout Japan, news of the violent Sanriku tsunami in the country’s northeast is spreading: 22,000 lives lost and 9,000 homes destroyed. Outside the print shops, crowds wait for the day’s paper. But they’re not jostling for pages filled with column after column of text. Rather, this news comes via art—multicolored images created by teams of artists who’ve spent days carving woodblocks, applying layers of ink, and pressing the blocks to paper made of mulberry bark pulp—all to create stunningly beautiful images that each tell a story. The prints provided affordable art for the masses, news for the curious; they were the tabloids of their time.

Woodblock prints and printers were ubiquitous in the era before photography and lithographs usurped them in the early 1900s. “There were literally millions of images,” says Barry Till, curator of Asian art at the Art Gallery of Greater Victoria in British Columbia. “People would come to print shops and buy them for just a few pennies.”

Artists were contracted by the print shops to create the art, but it was a team effort. The Sanriku tsunami piece, designed by artist Utagawa Kokunimasa, is a quadriptych, a picture with four panels, and each color in the image required its own woodblock carved of cherry wood. A print with six colors and four panels, for example, required 24 intricately carved woodblocks to complete. After each color was applied, the prints were dried on a line or a tatami mat before the next color was applied. It may have taken up to five days to produce the woodblocks for one image, yet they were still mass-produced in editions of 500, 1,000, even as many as 100,000 during times of war.

The woodblock print, called ukiyo-e, is an art form with a long history in Japan. But when these two Kokunimasa prints were made during the 1868-1912 reign of the Emperor Meiji, Japan was modernizing at a dizzying pace as it transformed from a feudal society with a strict isolationist policy to a world power in just 40 years. It was a time when the work of printmakers was shifting, too. Images of courtesans, landscapes, historical heroes, and kabuki actors, so prevalent in the past, were largely supplanted by prints that spoke of a modern Japan: cutting-edge technologies and architecture, including trains and telegraph lines, factories and bridges; men in top hats and tails, with Western-style hair (complete with mutton-chop sideburns and handlebar mustaches); women in bonnets and long gowns with bustles, strolling the promenade with parasols.

Artist Utagawa Kokunimasa (1874-1944) created this four-part woodblock print in 1896 to spread news about the tsunami in the Sanriku region, on the northeast coast of Japan’s main island, Honshu. Photo by Stephen Topfer/Art Gallery of Greater Victoria

The Meiji-era prints literally said to the people, “You are going to change quickly,” explains Till. “Cut your topknot, grow a beard, dress Western; the emperor and empress set the examples and everybody copied.”

While distributing ukiyo-e prints was a popular way to spread the word of a new and modern Japan, they were also used as propaganda tools, especially during the two wars Japan fought in the era. The prints released throughout the wars with China (1894-95) and Russia (1904-05) portrayed military events in hyperbolic overdrive—stalwart scouts scanning the next battlefield, victory celebrations, heroic battles. Japan and its military were rendered in a positive light (and with few casualties), while portrayal of the enemy was often racist and belittling, with the bodies piled high. All this mass-produced art was used to purposely stir up national pride and support for the war. The prints were also particularly effective recruiting tools. “Young boys would see them and say, ‘I want to join the army,’” says Till.

The prints showing the Sanriku tsunami and its aftermath were more about spreading the news than overt propaganda, but they squeeze in some messages, too. The ukiyo-e showing Red Cross workers, for instance, speaks to Japan’s efforts to modernize. “They wanted to show that we now have equaled the Americans and the Europeans; we have our own Red Cross, so therefore we have become westernized,” says Till. And the government may have used the prints to recruit workers to rebuild cities and help with relief after such disasters. 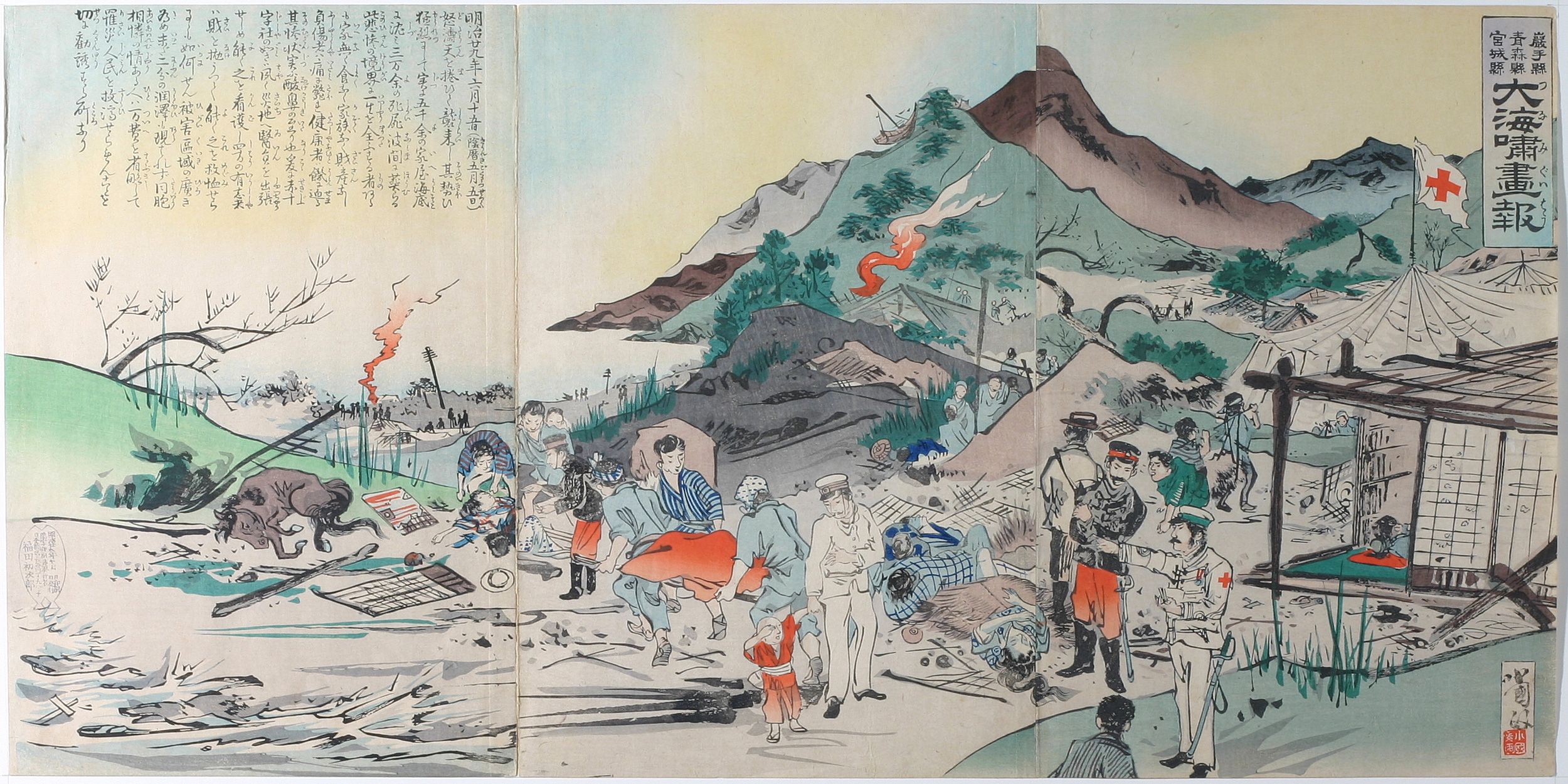 Utagawa Kokunimasa’s triptych illustrates the aftermath of the 1896 Sanriku tsunami and the efforts of Japan’s relatively new Red Cross to assist survivors. Photo by Stephen Topfer/Art Gallery of Greater Victoria

Kokunimasa’s image of the Sanriku tsunami is at once tragic, yet beautiful, and even humorous, too. Amid the turbulent water awash with bodies, swamped boats, and a burning building, people try to rescue one another and desperately cling to anything that floats. And there, above them all, is a naked woman surfing her bathtub to safety.

But is the woman’s sure-picked-the-right-time-to-take-a-bath ride true? “It’s a happy story with her floating to the side of a mountain and surviving with nothing but the bathtub,” says Till, adding that he believes it to be a true tale of survival amid the devastating loss of thousands and thousands of people.

Still, there is a certain beauty in her story, apocryphal or not, when you consider the literal translation of the art form that rendered her voyage in two dimensions—ukiyo-e means “pictures of the floating world.”