It’s no wonder the ocean routinely spits our garbage back to us, regurgitating the manufactured products we ignominiously dump into the sea. A recent study in Science estimates that, in 2010 alone, 4.8-million to 12.7-million tonnes of plastic entered the ocean from land. Garbage marring a favorite beach has impacted all of the artists profiled here. But rather than just tossing a few limp grocery bags and beat-up bottles in a waste bin, they are inspired to shape the marine debris into diverse and provocative works of art. As artist Fran Crowe explains, “The aesthetic makes [a piece] memorable and that gives an edge in getting across what’s really an unpalatable message about what we’re doing to the ocean.”

Fran Crowe, of Suffolk, England, is motivated more by activism than artistry. A 2006 United Nations report stating that 46,000 pieces of plastic float on every square mile of the ocean spurred her to gather the equivalent amount from her local shores. She assembles large installations from the collection, such as a hanging hut comprised of strung plastic garlands. Every project has a sardonic edge. Crowe has, for example, packaged marine debris and sold it beachside as souvenirs, donating the money to a marine charity. She laments not only the impacts of synthetics in the ecosystem but also the mindset of disposability: “Plastics, like diamonds, are forever. We should really treat them as a rare commodity because they do last forever and we’re using up precious oil resources by making them.” 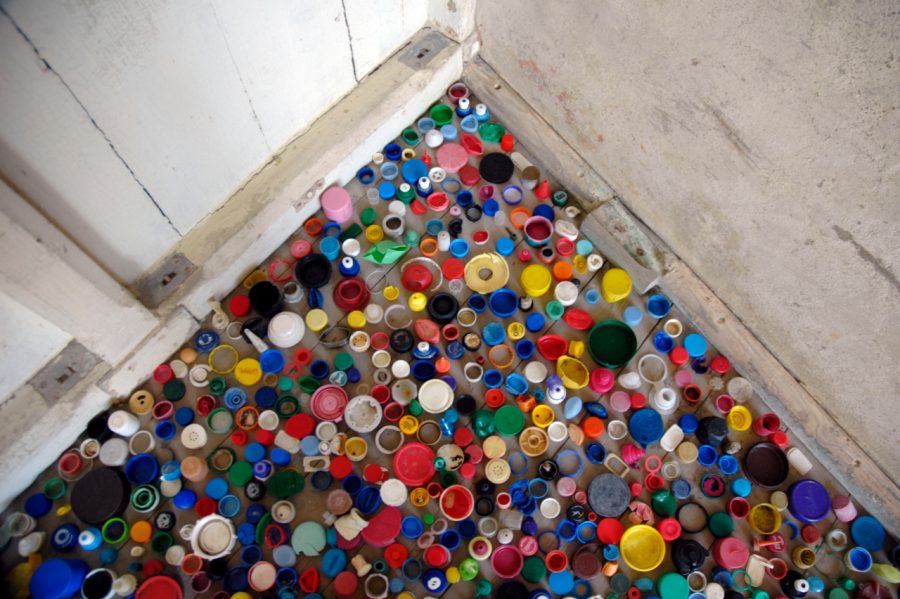 This view from above shows a portion of the thousands of bottle tops artist Fran Crowe used for an installation, shaped like a wave, at a local fort. Photo courtesy of Fran Crowe 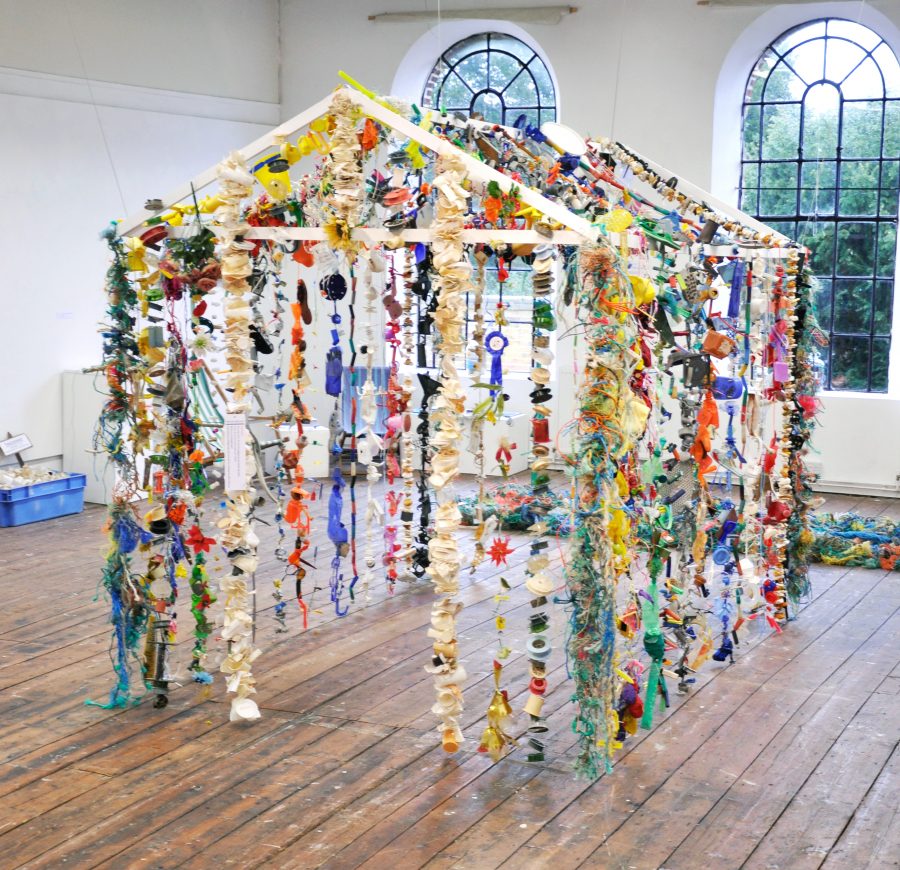 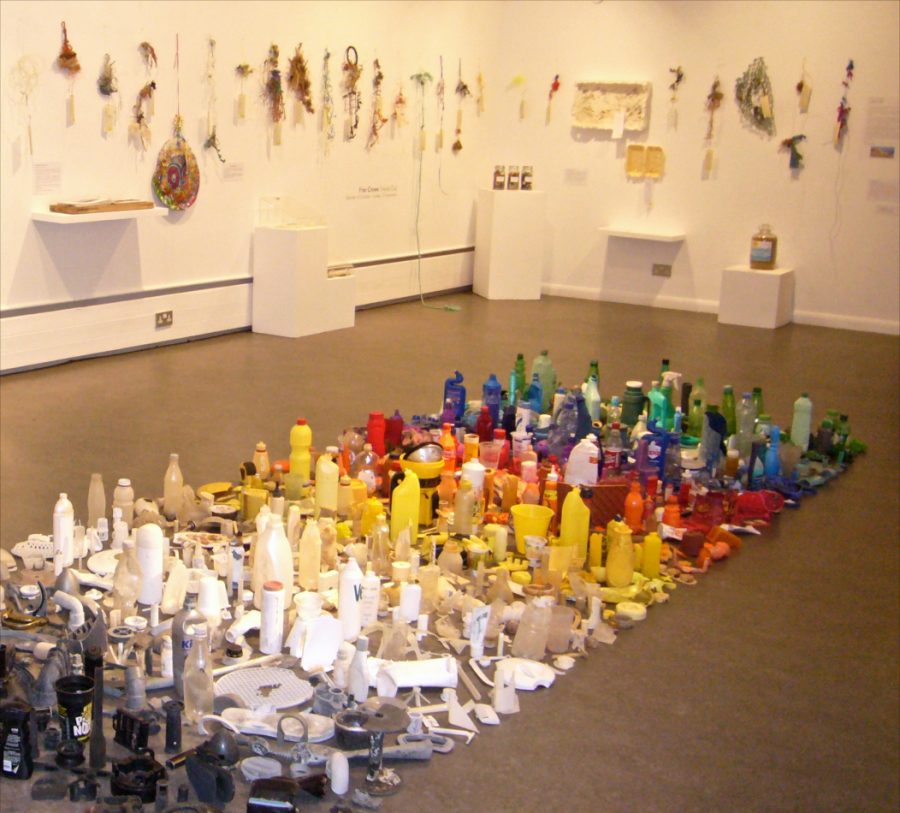 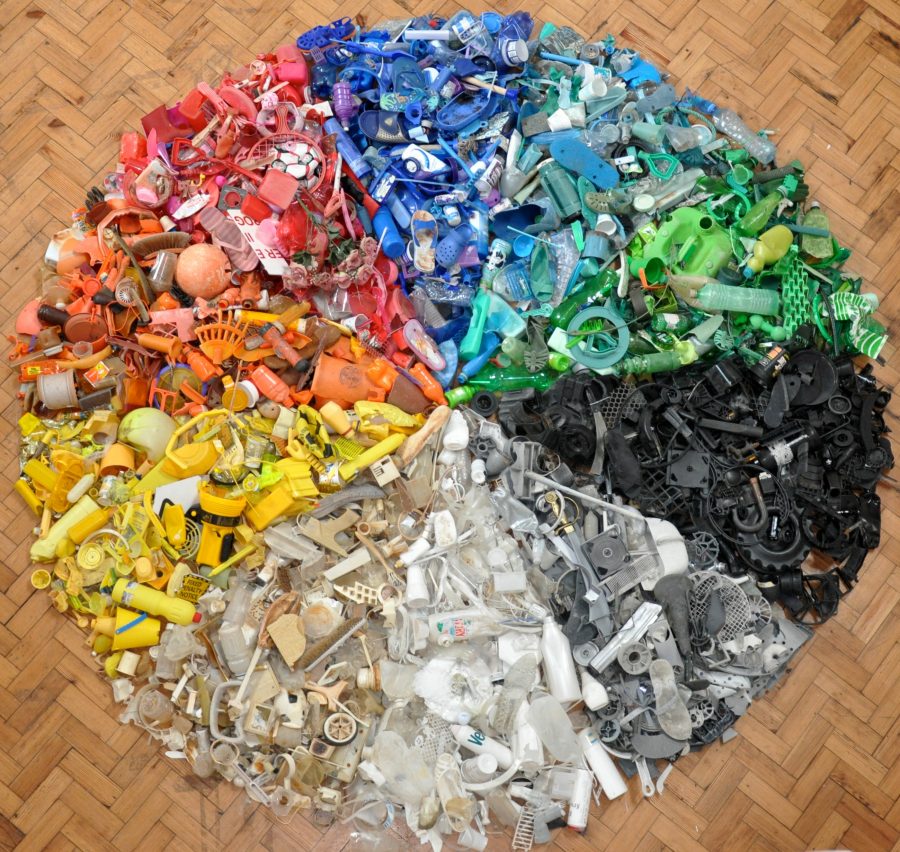 This circular installation, with a four-meter diameter, shows a color-coded cross section of garbage from a beach in Suffolk, England. Photo courtesy of Fran Crowe 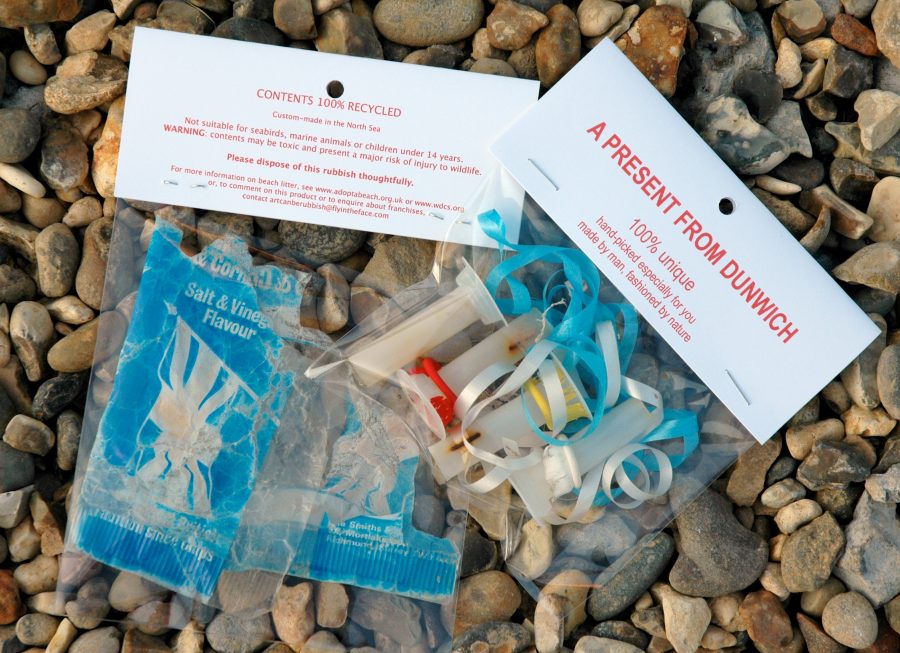 Artist Fran Crowe packaged garbage from the beach into souvenirs in order to raise awareness about plastics in the ocean. Photo courtesy of Fran Crowe

Mexican-born, Brooklyn-based, Alejandro Durán uses the Sian Ka’an Biosphere Reserve on Mexico’s Caribbean coast as his studio. He gathers debris and creates installations in situ, which he then photographs. Giant prints help replicate the “overwhelming feeling I have of being surrounded and toppled over by this garbage.” The artist has documented products from 50 regions—everything from a prosthetic leg to myriad toothbrushes and sandals. Many are cleaning products, such as shampoos, detergents, bleaches, and beauty products, “which is pretty ironic because they’re not making the beach look pretty at all.” Durán works to mimic nature to dramatic effect: in one image, white containers are strewn like clouds (nature’s containers); in another, toothbrushes stand erect in the mud like mangrove shoots. “I don’t want to just photograph a landscape but engage with the land and with the materials.” 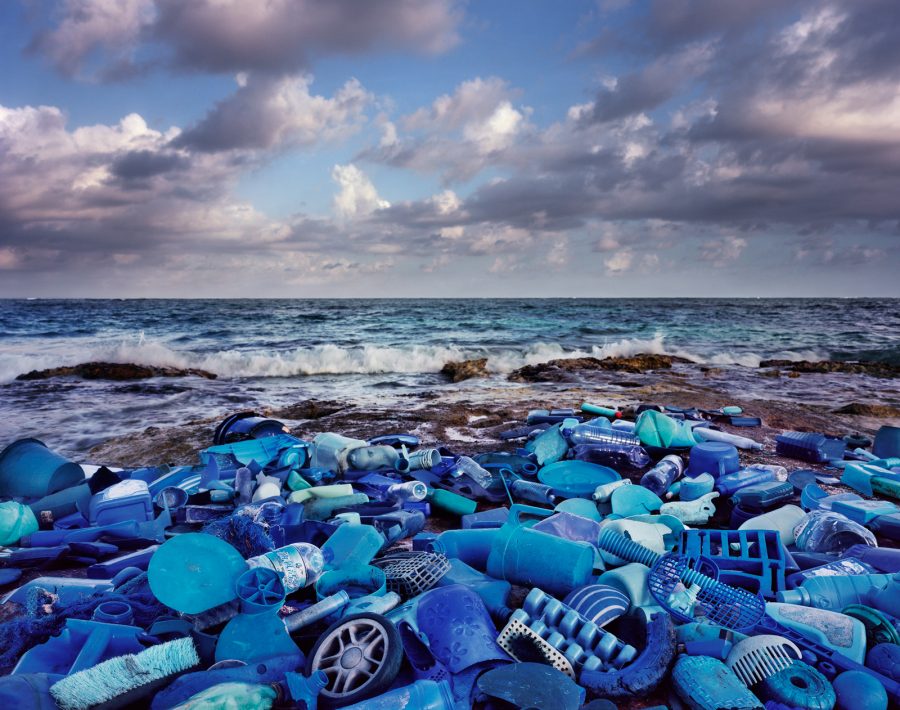 Pete Clarkson, a national parks employee, was searching for an artistic outlet soon after moving to Tofino, British Columbia, when he tripped over a scrap of wooden crate on the beach. It was painted blue and marked “Ocean Blue.” The irony made Clarkson laugh and was the genesis of his work creating whimsical sculptures from beach junk. Debris from the 2011 Tohoku, Japan, tsunami plays a large role in his recent work, including a 6 x 12-meter wave created out of fishing net that incorporates carved Japanese house timbers and other tsunami artifacts. The piece, now a permanent fixture at Tofino Botanical Gardens, is both a memorial and “a siren for people in our area, to gently remind them that this could be us. We need to pay attention, need to be prepared, and never forget that we live in the very same kind of area as the Tohoku region.” 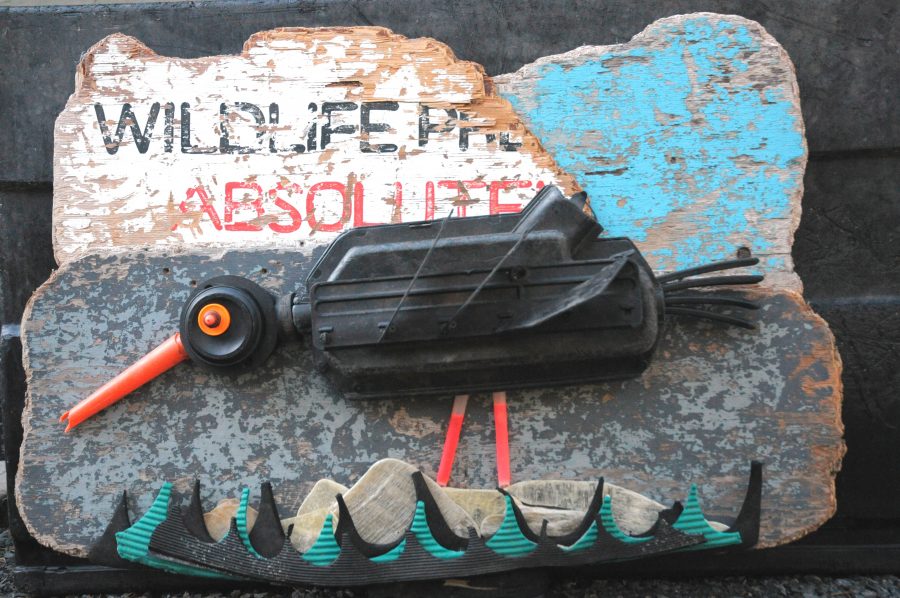 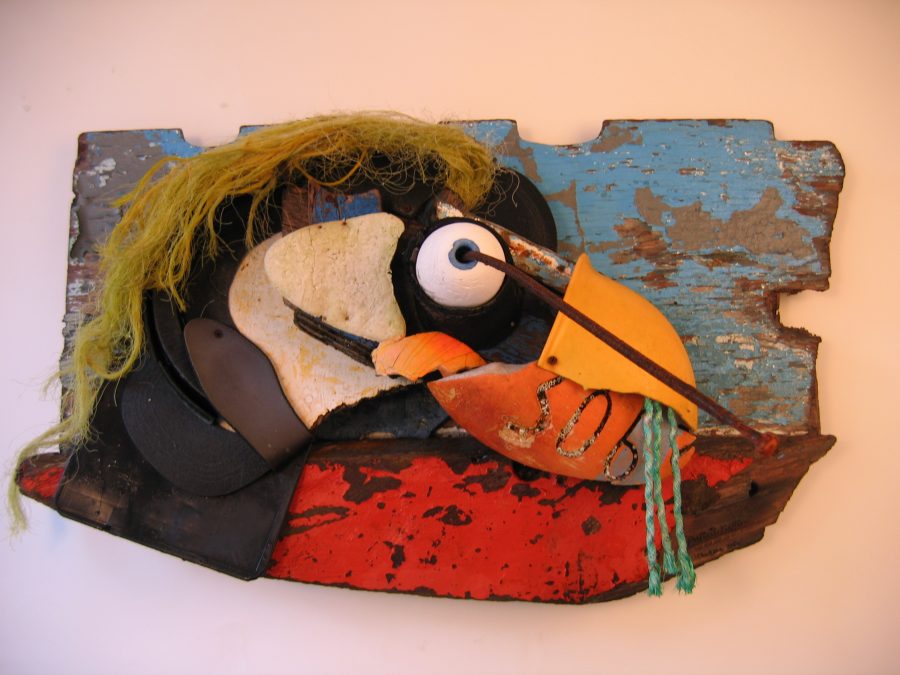 Pete Clarkson’s Pufted Tuffin emerged from wood with a large bolt in it and incorporates a hard hat for the beak. Photo courtesy of Pete Clarkson 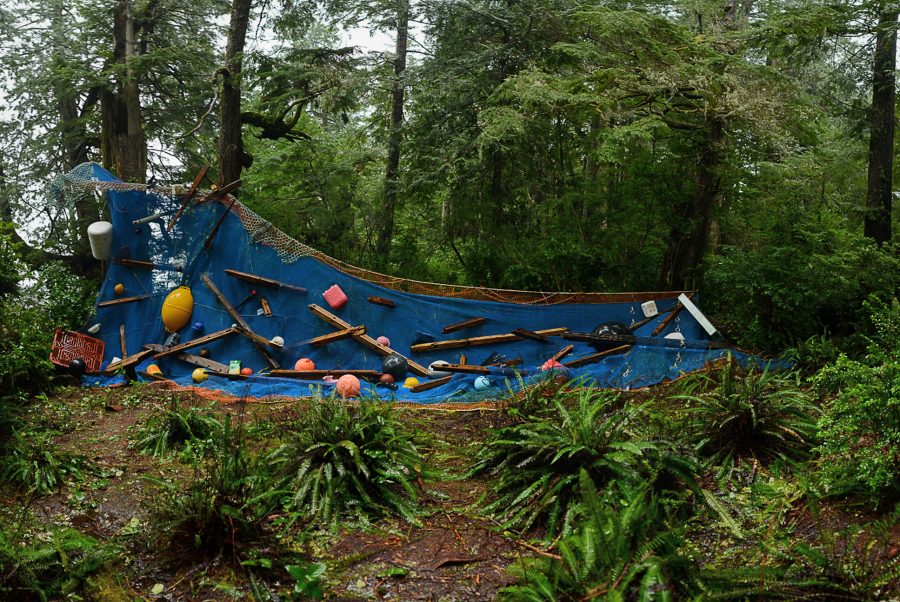 Swept Away, an installation at the Tofino Botanical Gardens, was assembled with fishing net and tsunami debris. Photo by Chris Pouget

Tess Felix, a hairdresser and make-up artist in Stinson, California, uses her knowledge of the human form and expertise with color, light, and shadow to craft elaborate portraits out of garbage, primarily from the beach. Working from a photograph, she “paints” using carefully cleaned and sorted scraps as her palette. A large portrait can take three months and thousands of pieces. From a distance, the portraits are often mistaken as abstract paintings; it’s only when viewers draw closer they realize the work is constructed of everyday items. “I hope the work creates some kind of awareness that every little thing we throw away counts, and is a reminder just to notice and to be aware… Everything’s become so convenient in our lives that we don’t really have to think.” 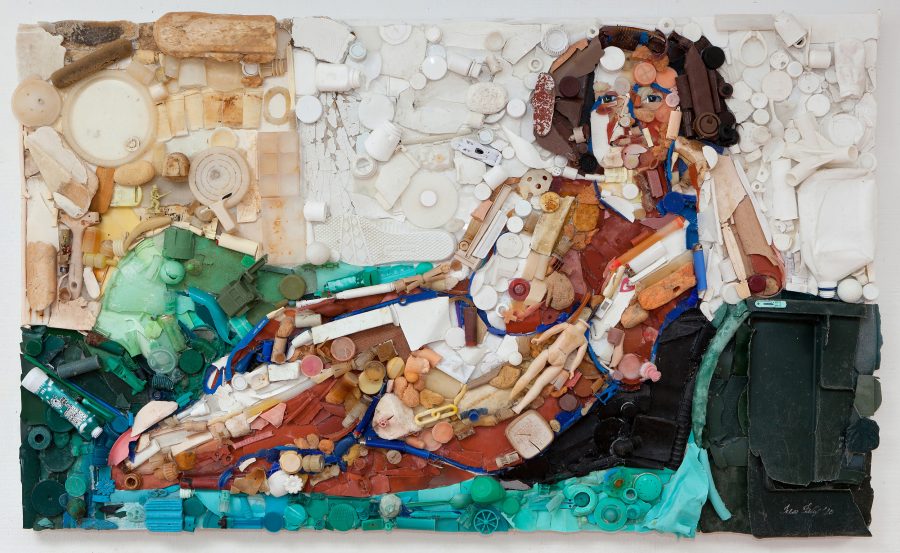 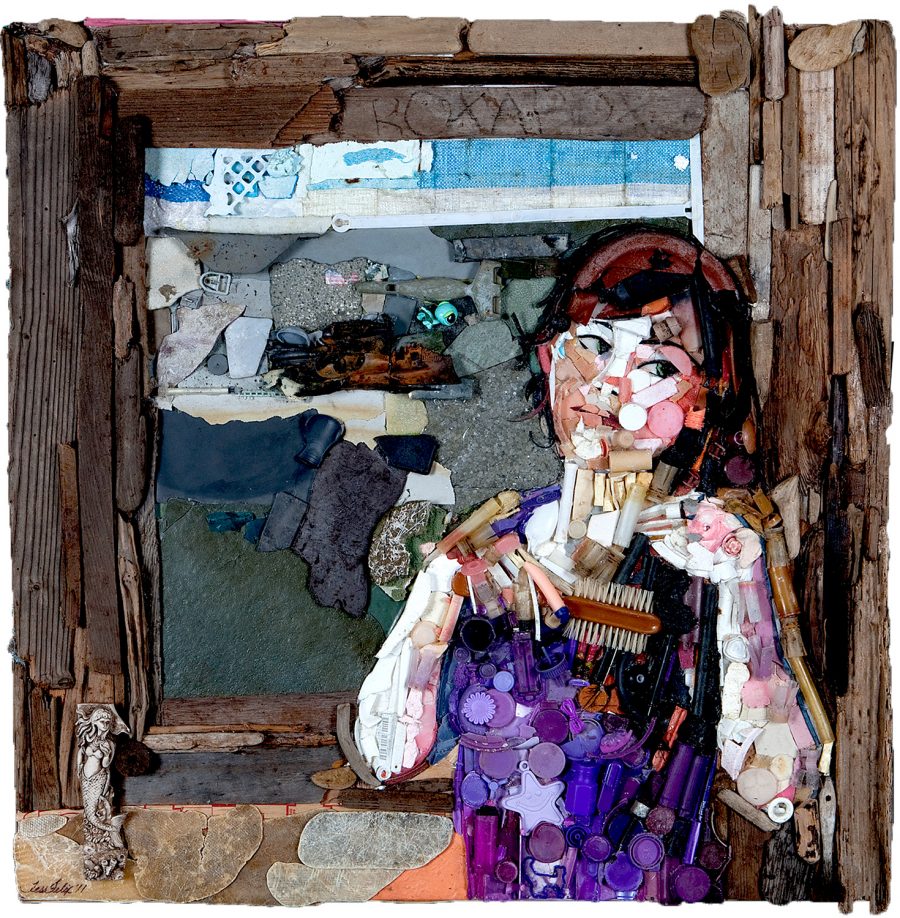 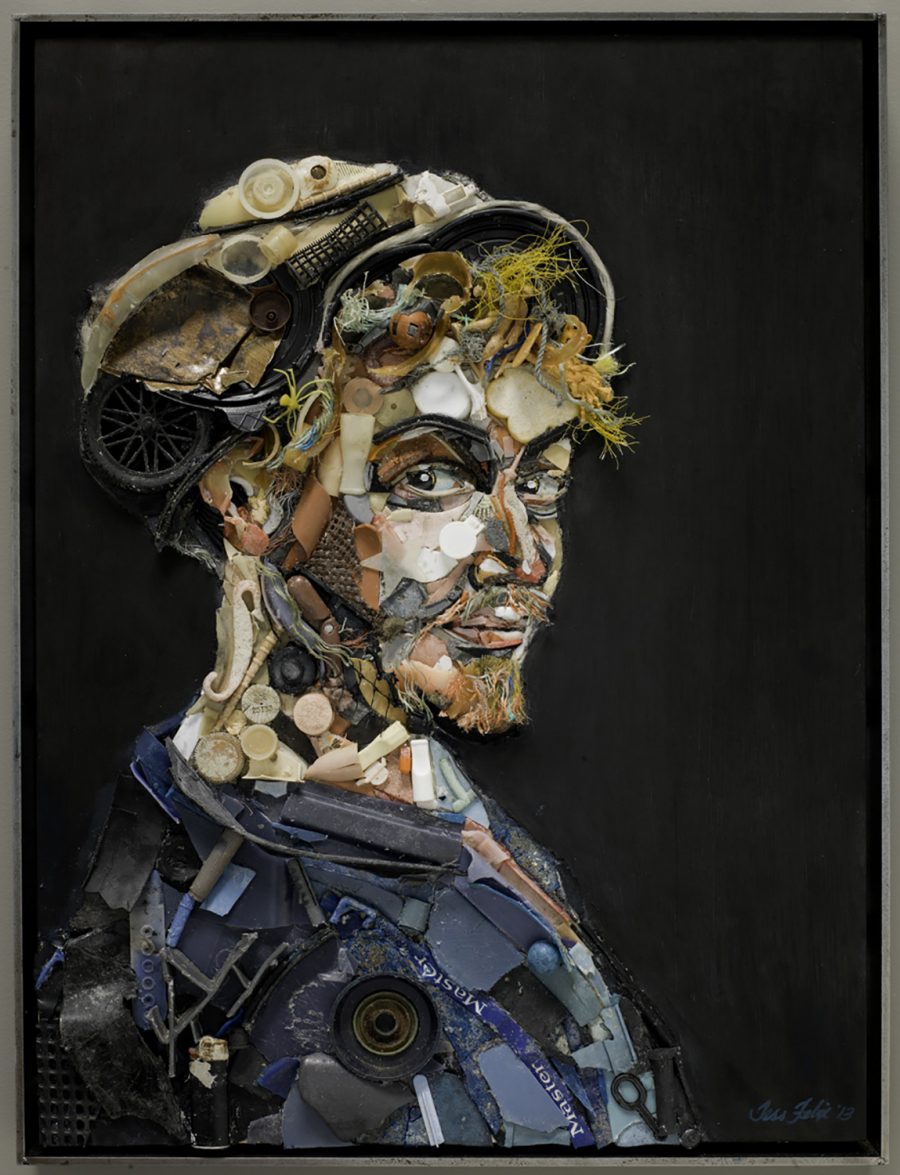 Each of Tess Felix’s portraits include a private message, hidden underneath the layers of beach debris. Photo courtesy of Tess Felix

Pam Longobardi, a university art professor in Atlanta, Georgia, was at the southern tip of Hawaii in 2006 when she stumbled across huge mounds of beach debris. “It just altered me,” she says. The artist stuffed 23 kilograms worth of garbage into a duffle bag—at the airport an authority peered in and quipped, “Thank you sista’ for cleaning up our island”—and embarked with new artistic direction. A few years later, Longobardi—“heartbroken” over the destruction caused by the 2010 Deepwater Horizon oil spill—began assembling large installations “of shame and mourning,” using black plastic debris, which alludes to plastic’s origins as oil. One installation mimics a giant hand mirror, another a huge cornucopia spilling nets and floats. Longobardi considers her work a form of cultural archeology and approaches each beach as a study site. “To me those objects are almost like a new form of information. I really believe that the ocean is communicating its state of being with us.” 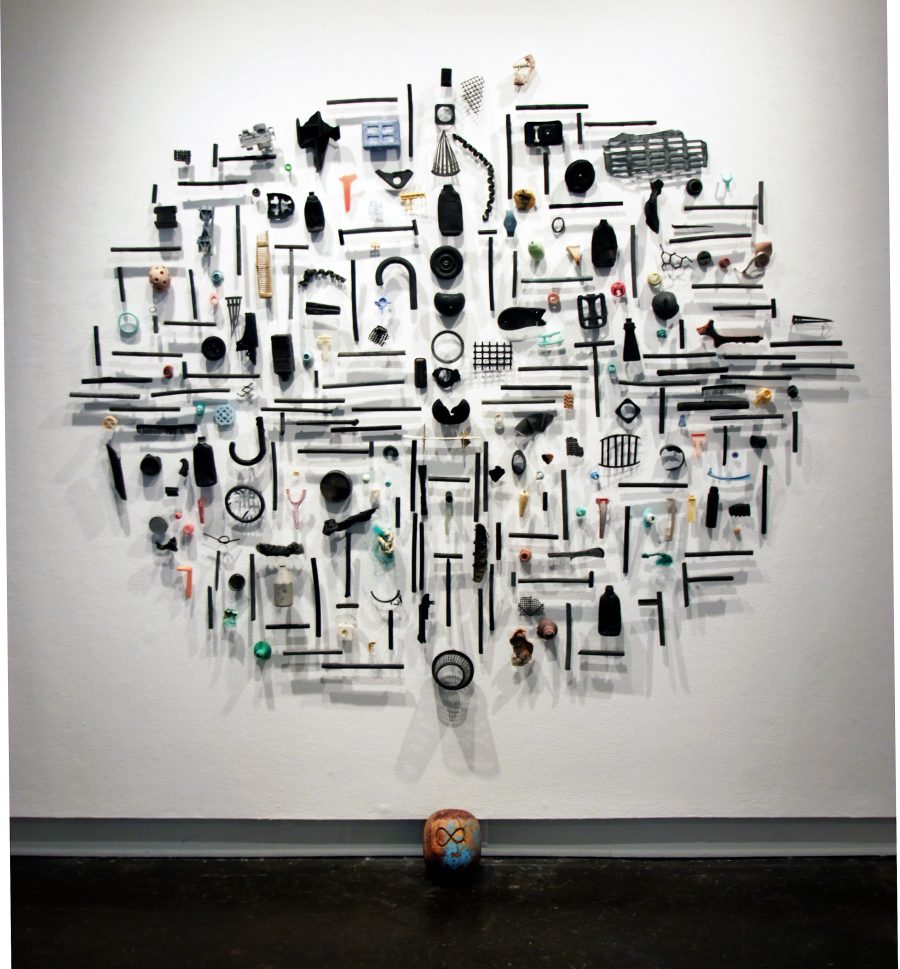 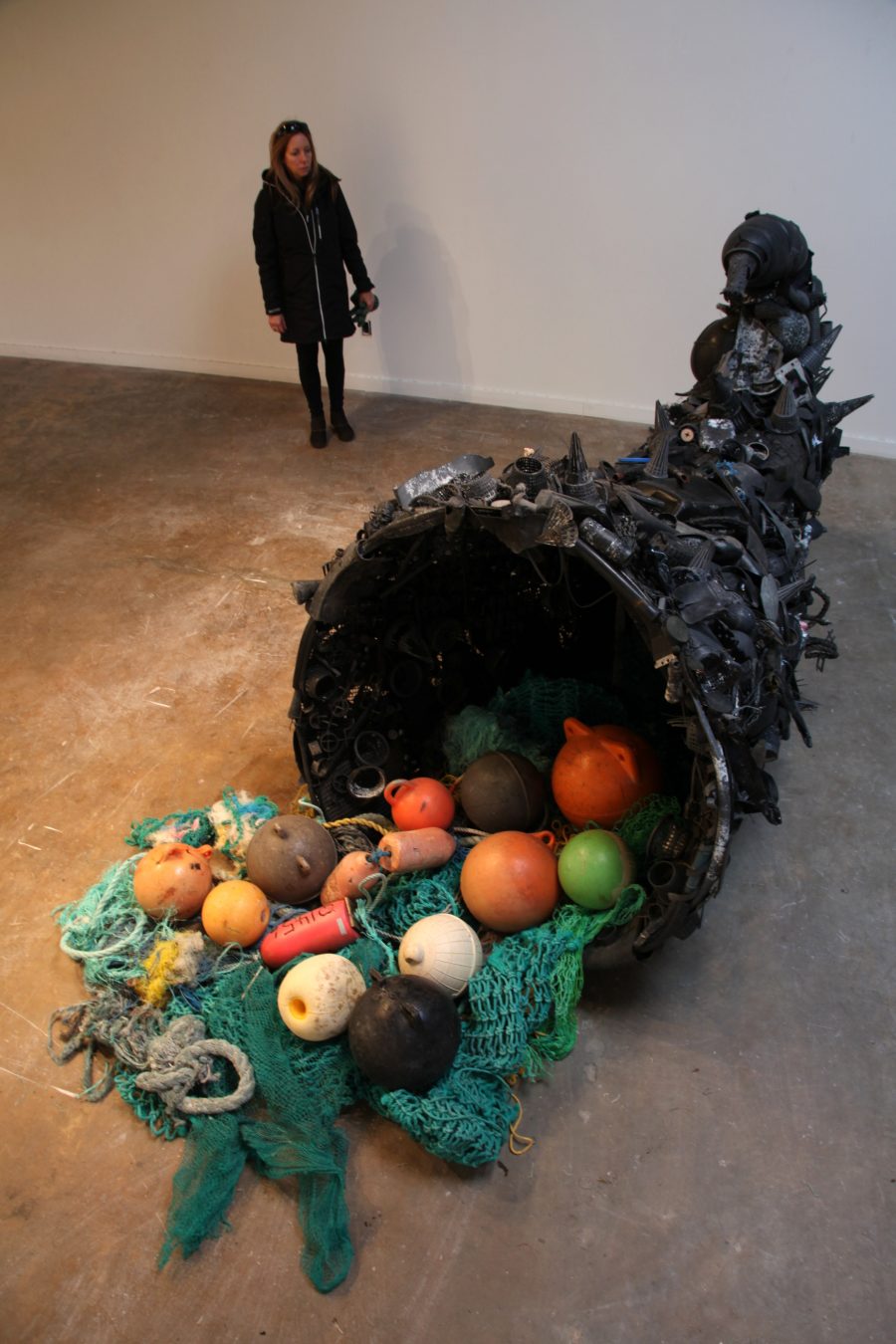 The cornucopia-shaped Bounty, Pilfered was composed of nearly 1,000 pieces of plastic. Photo by Mike Jensen 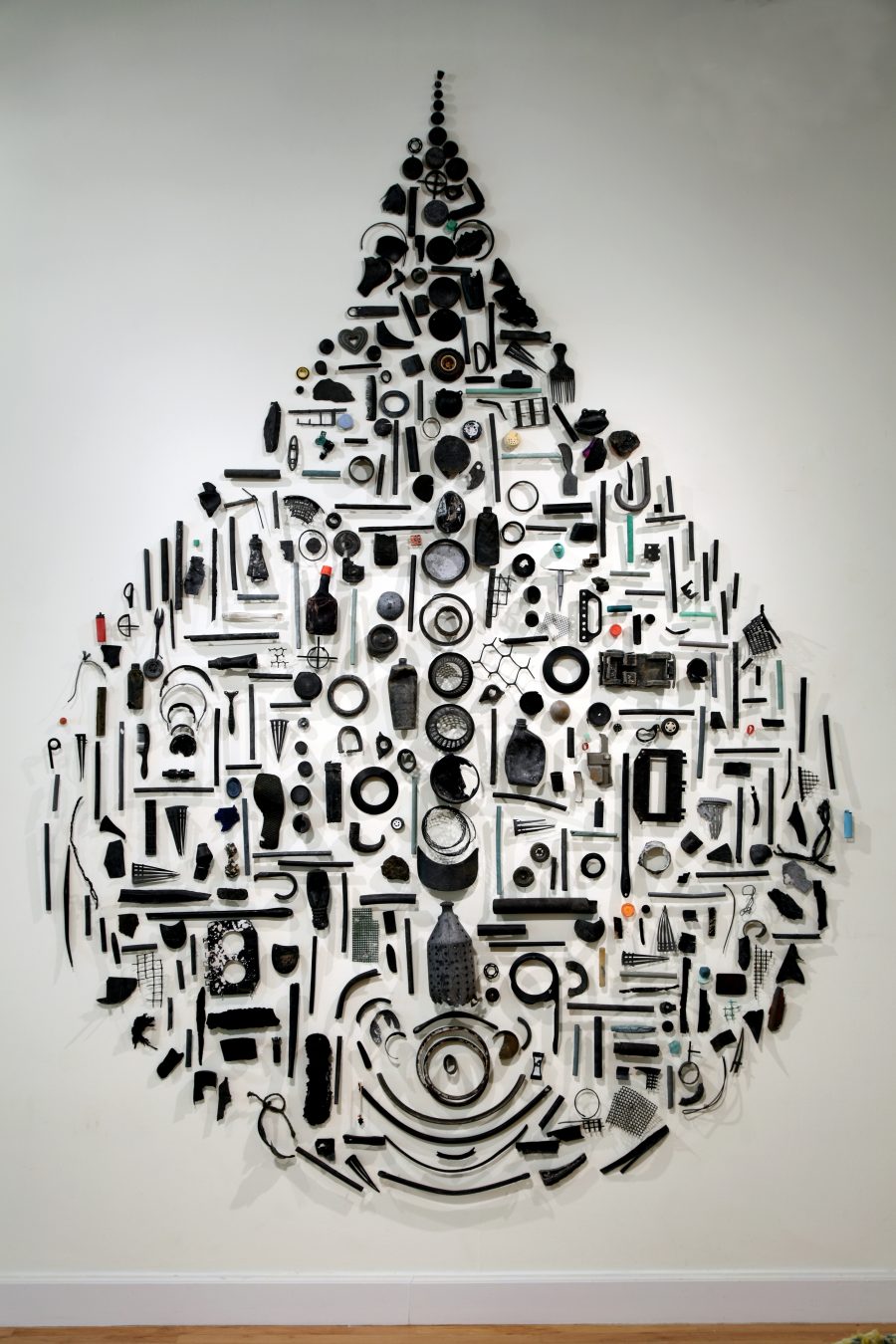 Pam Longobardi’s Crime of Willful Neglect (for BP), assembled with black plastic, was created in response to the Deepwater Horizon oil spill. Photo by Mike Jensen