The Halifax Shipyard, circa 1919. The hillside in the background shows the aftermath of the 1917 explosion in Nova Scotia’s Halifax Harbour. Photo by Wallace MacAskill, from Then and Now: Photographs of Nova Scotia courtesy of Nimbus Publishing

On the cold clear morning of December 6, 1917, around 8:00 a.m., two ships moved into opposite ends of the Narrows. The channel links Halifax Harbour’s sheltered Bedford Basin to the Atlantic Ocean and at its narrowest point is a scant half-kilometer wide.

The Great War raged in Europe, and Halifax Harbour on Canada’s east coast bustled, with its dockyards, shipyards, myriad industries, and the growing communities of Halifax and Dartmouth on opposite shores. The freighter Mont-Blanc, en route from New York to European battlefields with a cargo of munitions, waited outside the Narrows. She had arrived the day before but only after the anti-submarine nets across the entrance to the Narrows had been lowered for the night. Now, as the sky brightened, the Mont-Blanc moved into the channel. Steaming in the opposite direction was the Imo, a Belgian-chartered ship bound for New York where it was to pick up relief supplies for German-occupied Belgium.

Imo hugged the eastern side of the channel, the same side as Mont-Blanc. Neither ship gave way. With collision imminent, Mont-Blanc steered west, toward the Halifax shore, but Imo simultaneously reversed, which swung its prow deep into Mont-Blanc’s hull.

It would have been a simple marine fender bender but for Mont-Blanc’s cargo: more than 2,500 tonnes of explosives including TNT, gun cotton, and crystalline picric acid. The heat and friction of the collision ignited a fire. Mont-Blanc drifted toward the Halifax shore where it smoldered for 20 minutes. At 9:04 a.m., it exploded.

That morning, the equivalent of three kilotons of TNT went up. It was the largest human-caused explosion the world had seen. Even today, only the detonation of atomic bombs and a small handful of other explosions have ever exceeded the power of the blast. After the Mont-Blanc exploded, Imo was thrust onto the Dartmouth shore by the resultant tsunami. 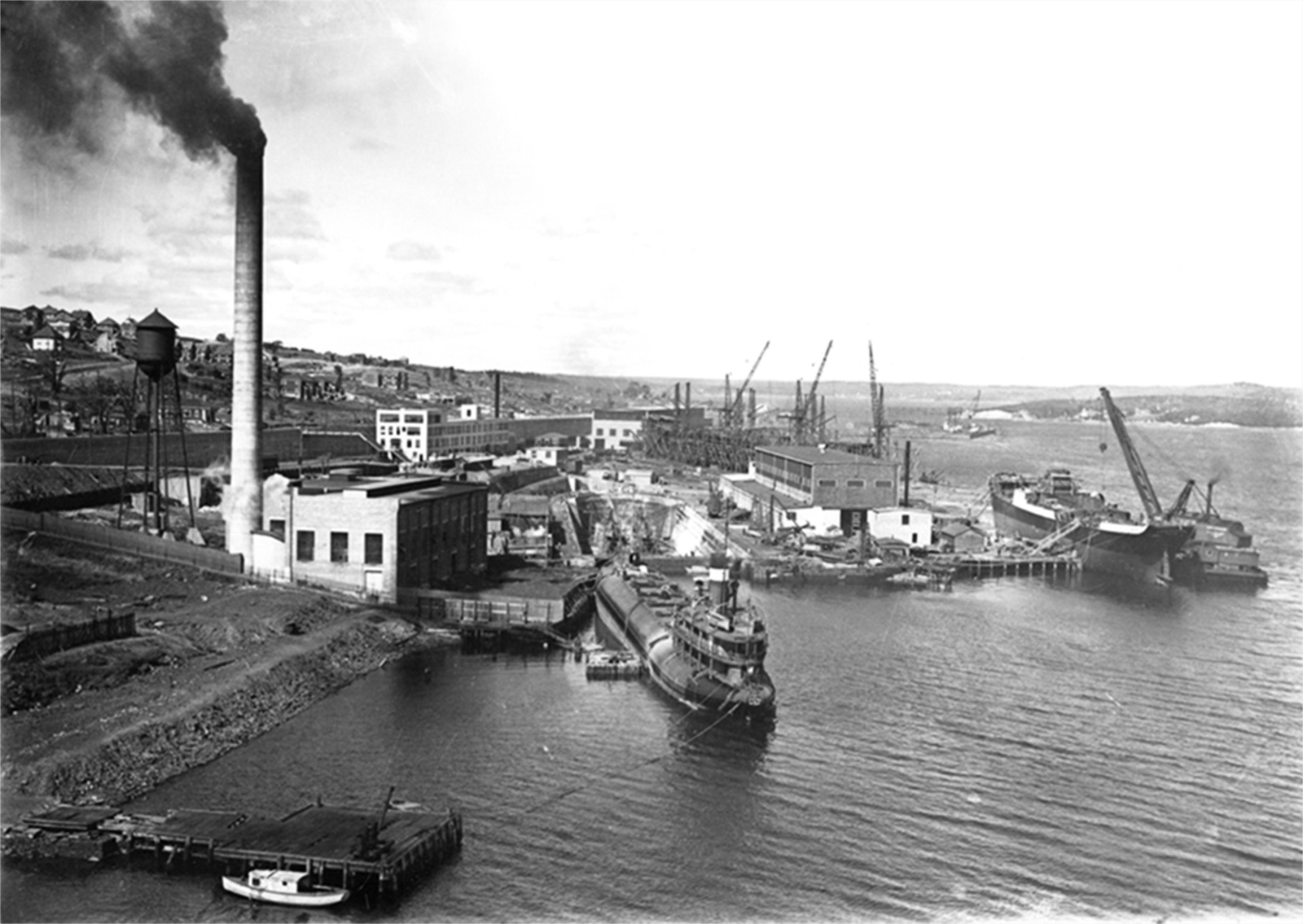 Photo by Wallace MacAskill, from Then and Now: Photographs of Nova Scotia courtesy of Nimbus Publishing

Ground zero of the disaster is clear in Nova Scotia photographer Wallace MacAskill’s picture, circa 1919, which looks northward along the Halifax shoreline. To the left, above the Royal Canadian Navy docks, is the charred hillside where the neighborhood of Richmond once stood. Home to the port laborers, factory owners, and other workers, it bore the brunt of the blast. Of the 50,000 or so Halifax residents (and several thousand in Dartmouth), about 2,000 died instantly and thousands were injured. 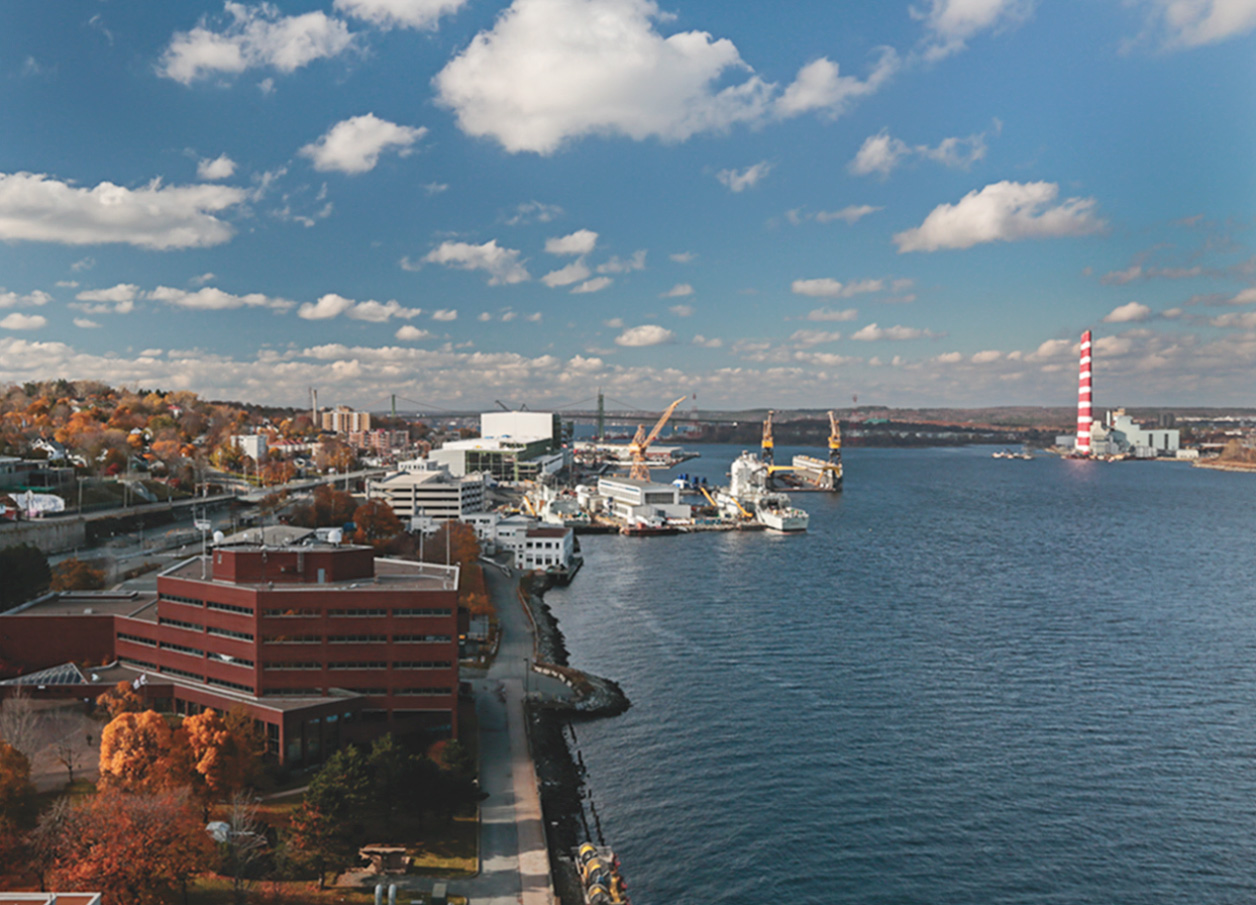 To the right are the candy-striped towers of the Tufts Cove Generating Station in Dartmouth that was completed in 1965. In the distance, the A. Murray MacKay Bridge spans the top of the Narrows. Photo by Len Wagg, from Then and Now: Photographs of Nova Scotia courtesy of Nimbus Publishing

Today, the physical traces of the explosion in Halifax Harbour are gone. This 2015 photo shows that where Richmond once stood is now the thriving North End neighborhood and that shipyards still operate along the waterfront. But the disaster left a deep psychological scar on the growing city and many residents still have stories of families and neighborhoods ripped apart.