Like many Newfoundland fishing villages, Petty Harbour, shown here sometime between 1894 and 1904, was once dotted with wooden sheds known as fishing rooms. A storm destroyed most of the fishing premises in 1967; they were rebuilt, but largely abandoned after the cod moratorium of 1992. Photo courtesy of The Rooms Provincial Archives Division, A 10-1/Holloway

Sitting on the edge of the dock, swinging their legs back and forth, children eagerly await the return of their fathers. The fishermen left at sunrise, guiding their small boats out to fertile inshore fishing grounds to pull in cod with handlines. When the first boat appears at the mouth of the fjord-like inlet, the kids jump up and run to their respective rooms. But we’re not talking about their bedrooms; in Newfoundland, the term “rooms” refers to structures on the waterfront, including the iconic gable-roofed sheds known as fishing rooms. Soon, the harbor is a flurry of activity as fishermen unload their haul and women and children help remove the cod’s head, spine, and guts. Some giddy youngsters even have the honor of cutting out a jiggling cod tongue.

This is Petty Harbour, Newfoundland. It could be the 1600s or the 1960s; this scene played out every fishing season for nearly five centuries. If you look at Petty Harbour on a map, you’ll see what resembles an outstretched arm flashing the peace sign. Those two fingers of water have been on the pulse of the Newfoundland fishing industry since the Basques, Portuguese, and French established seasonal fishing settlements in Petty Harbour (the name Petty comes from petite­, the French word for small) in the 1500s. The English arrived in the 1600s, and set up rooms along the south side, which received superior summer breezes for drying fish. When the Irish later arrived, they were relegated to the muggy north side. In those days, Catholics and Protestants didn’t often mix—but they got along well enough to earn the community a reputation as the little fishing village that could. 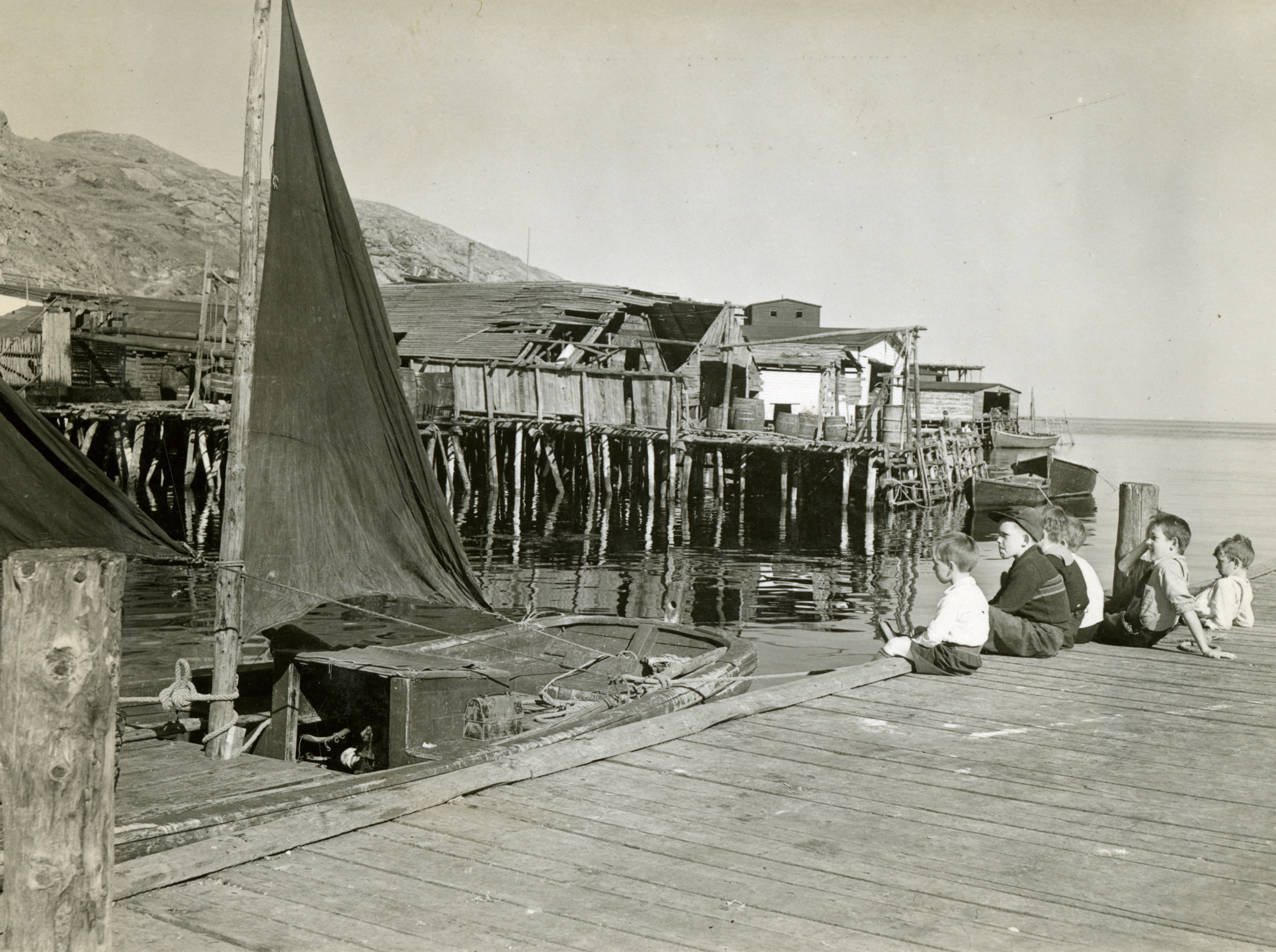 Young boys sit on a wharf in Petty Harbour sometime in the 1940s. Back then it was common for children to help out in the fishery, with tasks ranging from tying up the boats to cutting out cod tongues. Photo courtesy of The Rooms Provincial Archives, VA 15 A-43.1

In the early 1960s, the fishermen of Petty Harbour took on the Canadian government when it repealed the community’s long-held laws preserving fishermen’s handline grounds in an effort to push more “efficient” longlines and gill nets. The fishermen were successful, but still hard hit by overfishing, which resulted in the 1992 moratorium on northern cod that put some 30,000 people in Newfoundland out of work and slammed the door on the rooms.

“With the demise of the cod fishery, so went the rooms in many communities,” says St. John’s-based archivist Larry Dohey. “There was no reason to maintain them anymore. They were more or less abandoned.” As the fishermen turned to snow crab to make a living, they required heavier equipment, bigger boats, and concrete wharves, which made the work more dangerous. The fishery was no longer kid-friendly and the shoreline of Petty Harbour changed. 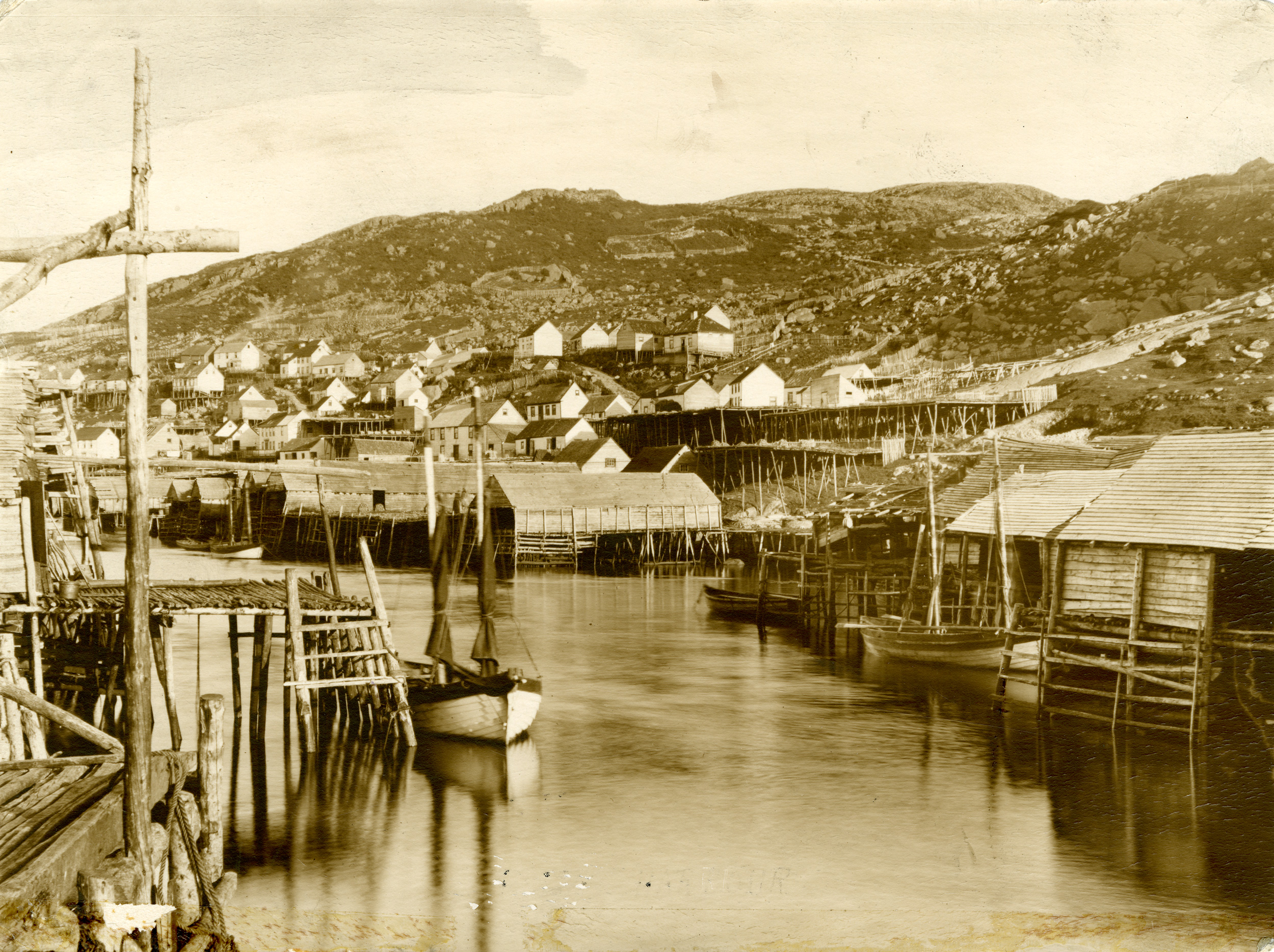 Petty Harbour has long enjoyed a reputation as a community that cares deeply about the cod fishery. In 1895, around the time this photo was taken, the handline fishermen’s inshore fishing grounds received legal protection from trawls—longlines with many hooks attached. Photo courtesy of The Rooms Provincial Archives Division, A 10-1/Holloway 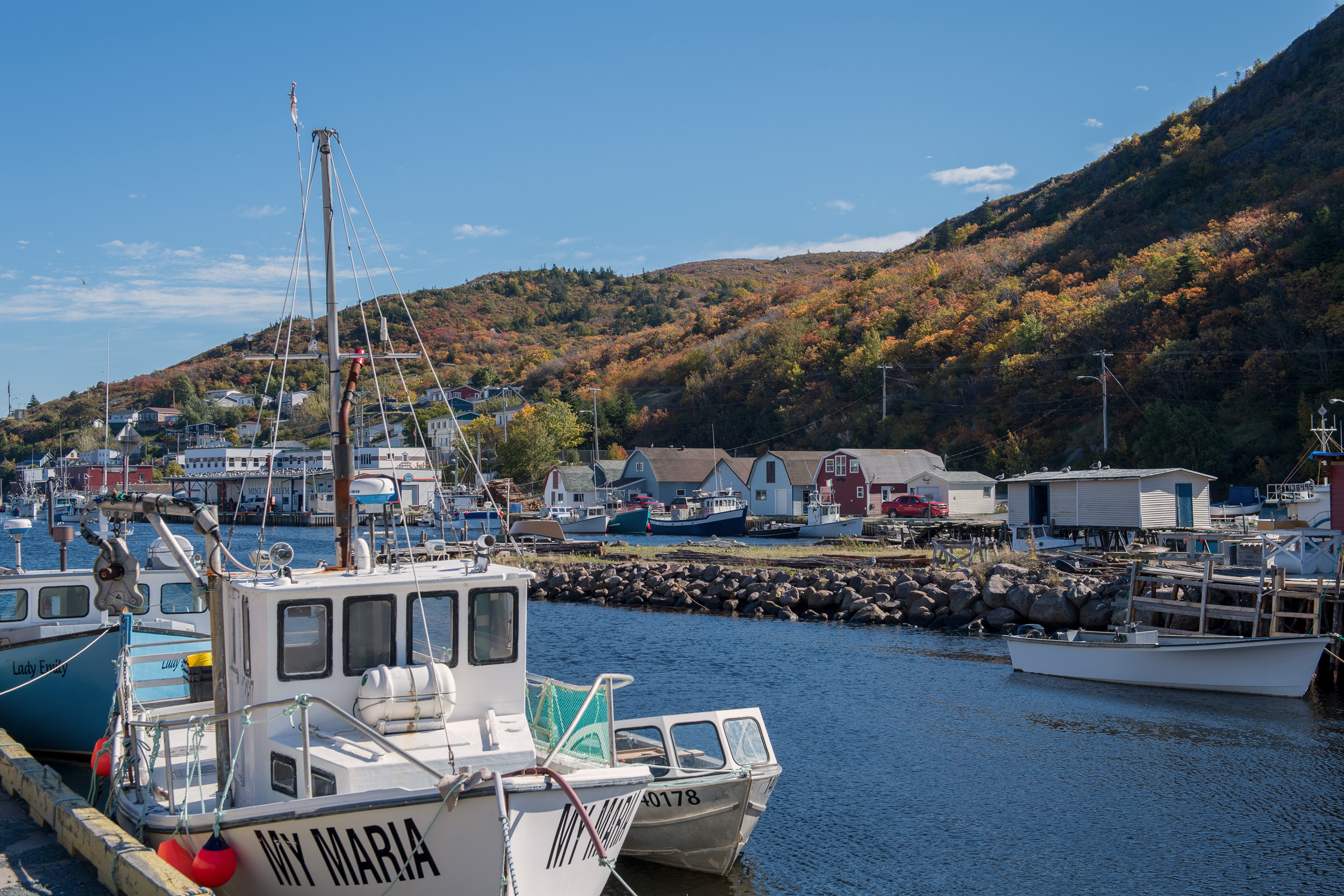 Barn-like fishing sheds have replaced the fishing rooms of yesteryear in Petty Harbour. But local nonprofit Fishing for Success has plans to build traditional structures along the spit shown here, including a traditional fishing room to the right, just outside this image’s frame. Photo by Stan MacKenzie

But today, a nonprofit organization is resurrecting the rooms and establishing a program called the Youth Cod Fishery. “We need to create a new pathway for kids to experience their fishing heritage,” explains Kimberly Orren, project manager and founding director of Fishing for Success. “Fishing is not just a recreational thing; it’s a connection to your food and your culture. It’s a very deep and powerful thing.”

In 2012, Orren purchased about a third of the land around the inner harbor, an area known locally as Island Rooms. Since then, Orren and her colleagues have used traditional methods and materials to build a pair of sheds, a pier (known as a stage), and four wooden dories. Fishing for Success has also launched a number of initiatives to connect Newfoundlanders to their heritage, including Girls Who Fish, to get women young and old on the water; Dory Club, to teach basic boating skills; and Stories in the Stage, to explore the cultural side of the fishery. The organization is aiming to build a gable-roofed fishing room (also called a twine loft), as well as two more sheds for storing and processing fish, by next summer—just in time for the Canada 150 celebrations and the 25th anniversary of the cod moratorium. 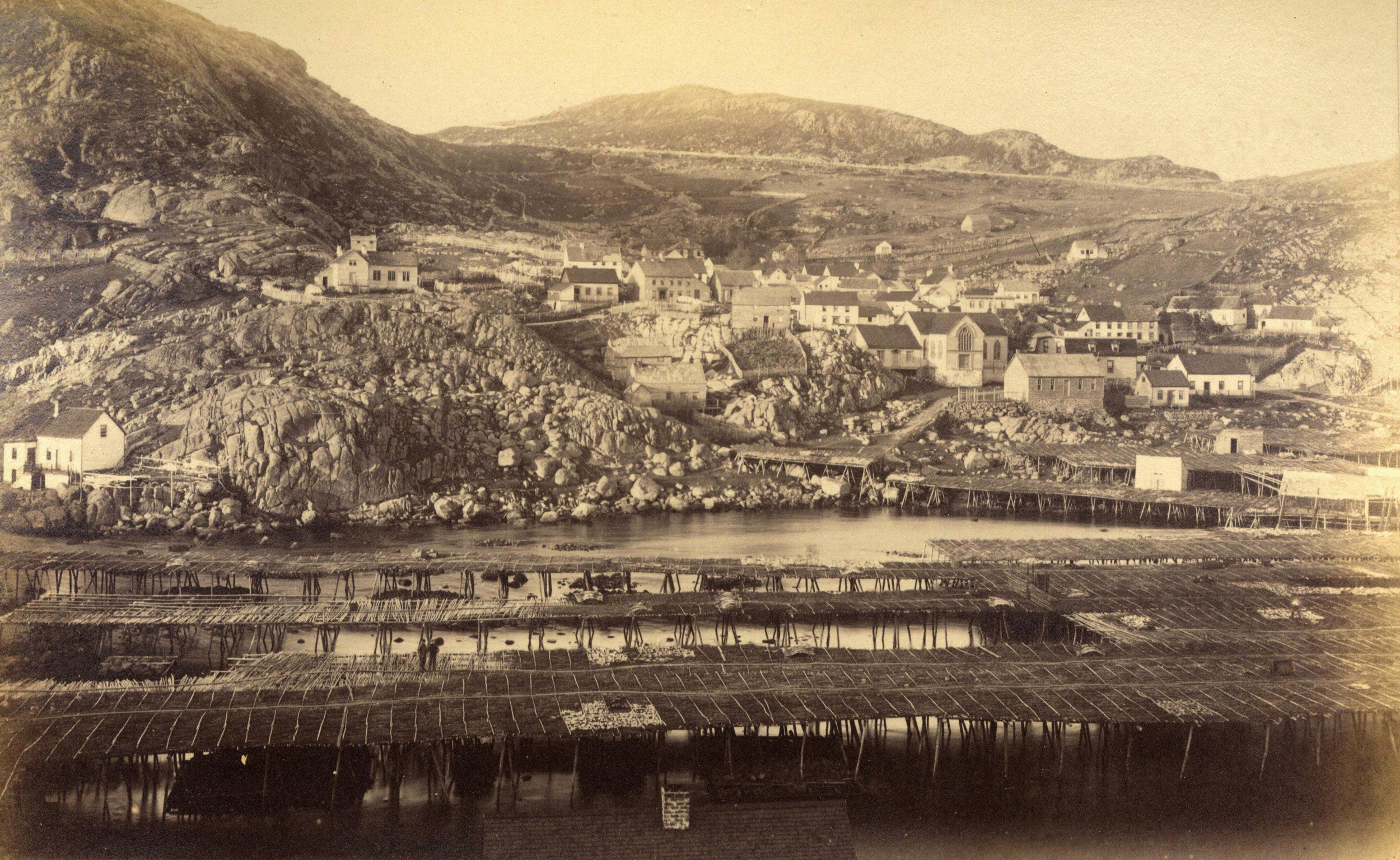 Wooden rack-like structures called flakes once dominated the inlet of Petty Harbour. This photo, believed to have been taken in the 1880s by Newfoundland’s earliest professional photographer, Simeon H. Parsons, shows a barren hillside—the result of trees being cut to make flakes. Used to dry salted fish, the flakes started coming down around the same time freezer technology caught on and consumers demanded more frozen fish sticks and fillets and less dried fish. Photo courtesy of Memorial University of Newfoundland Libraries, Archives and Special Collections 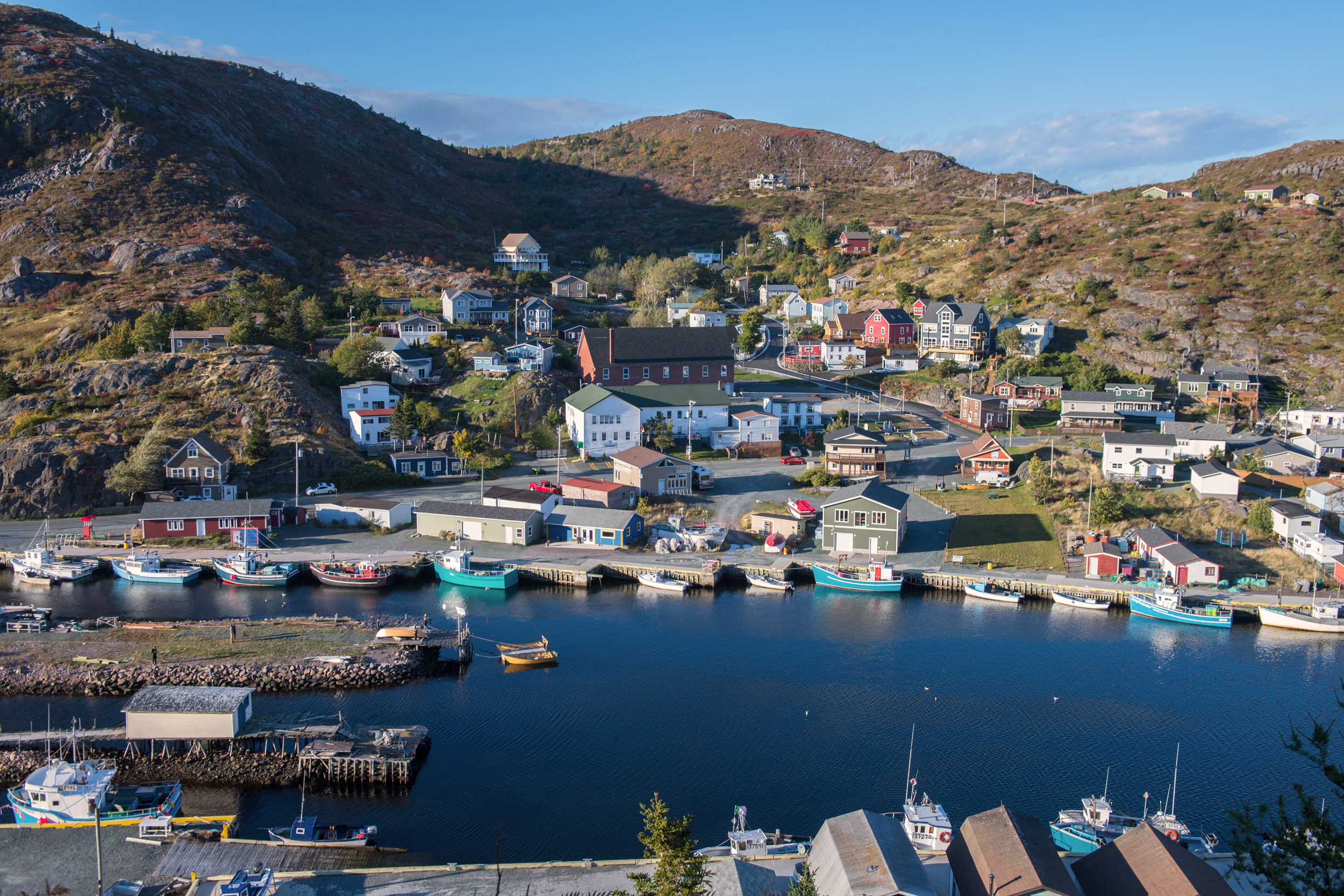 Two yellow dories belonging to Fishing for Success are tied up at the end of a spit in Petty Harbour, where they are used to teach traditional fishing methods. The area was once covered in flakes and much of the land was under water. The habor has been filled in over the years to accommodate the construction of concrete wharves, which were necessary when the fishery changed from cod to snow crab. Photo by Stan MacKenzie

But for Orren, re-creating the rooms is more about function than fashion. “It’s not any kind of woe-is-me, I-miss-the-past thing. It’s just the reality that concrete wharves aren’t accessible to young people and families. A hard-hat workplace is not a hands-on experiential safe place for youngsters and families.”

While Orren may not be motivated by nostalgia, others certainly are. The fishing structures were once so ubiquitous that when Newfoundland’s provincial archives, art gallery, and museum came under one roof in 2005, it was a gabled one. The cultural center was aptly named The Rooms and its architecture and logo are a nod to the classic twine lofts of long ago.

“Newfoundlanders have always been very keen to stay in touch with their history and especially their language,” says Dohey, who is manager of collections and projects at The Rooms. “As you lose these structures and the physical evidence of our history, you lose the language, and calling our heritage and cultural center The Rooms was one way of holding on to it. What better phrase to use than something that’s very much part of our heritage.”