To dress up for an important ceremony on St. Lawrence Island, a Yu’pik man donned this finely made gut parka. Image courtesy of the National Museum of the American Indian, Smithsonian Institution (123404.000). Photo by NMAI Photo Services

Around 1923 or perhaps a little earlier, one of the Yup’ik inhabitants of remote St. Lawrence Island in the Bering Sea decided to sell this fine ceremonial parka to Arnold Liebes, a furrier from a prominent California family. The Liebes owned a string of Arctic trading posts, as well as an elegant department store near Union Square in San Francisco: Arnold Liebes knew all about high-end fashion and style. So on one of his trips to northern Alaska, he purchased this classic Yup’ik parka fashioned from bleached walrus intestine and ornamented with plumes and orange beak parts from crested auklets.

St. Lawrence Island lies more than 250 kilometers southwest of Nome, Alaska, and for nearly 2,500 years, the Yup’ik people and their ancestors hunted whales, walruses, and other sea mammals along its inlets and fished for salmon and halibut along its coast. With little access to cloth even in the early 20th century, Yup’ik women tailored fine, fitted clothing from the materials that surrounded them in their everyday life—animal furs, skins, and intestines.

By tradition, Yup’ik women chose the small intestines of bearded seals or walruses—a material they called gutskin—to make rain parkas. (A bearded seal yielded some 22 meters of gutskin, about enough for one parka; the larger walrus produced nearly twice as much material.) First, the women meticulously cleaned the intestines. Then they slit the tubelike organ lengthwise and cut it into sections, sewing one piece to another so that the gut’s outer surface always would face the elements in the finished parka. In doing so, the women took advantage of basic anatomy: the gut’s exterior layer repels water, but it allows vapor from the inside to escape outward.

In essence, waterproof gutskin breathed. “It was the Gore-Tex of the day,” says Ellen Carlee, a PhD candidate at the University of Fairbanks, who is studying traditional uses of gutskin. 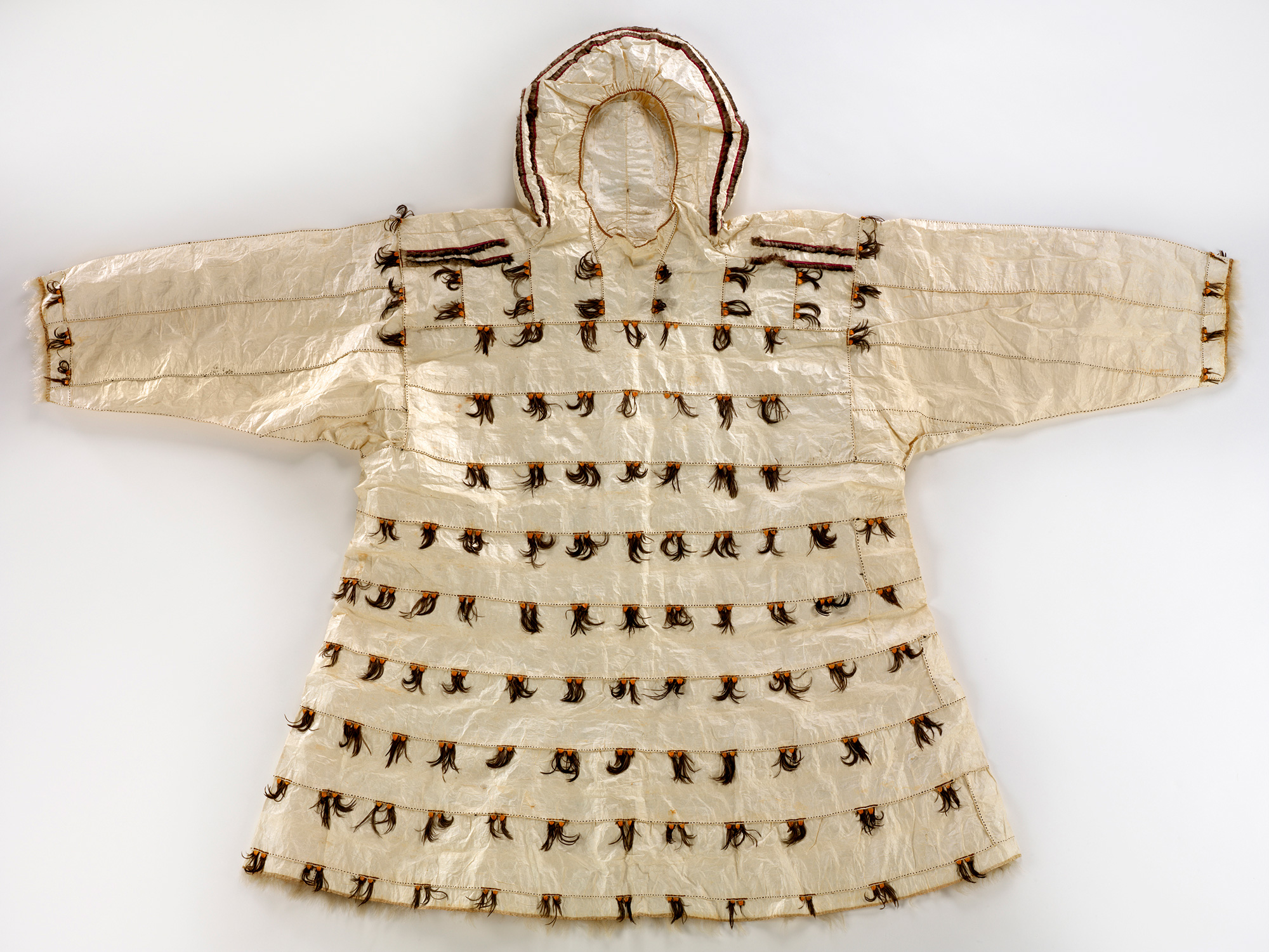 The man’s parka purchased by Liebes was designed for important ceremonial occasions, not the rough and tumble of daily Arctic life. So the maker bleached the intestine. First she inflated it; then she placed it outdoors in winter to freeze. “And when that freezing happened,” says Angela Linn, senior collections manager of ethnology and history at the University of Alaska Museum of the North, “it changed the intestine into an opaque material, and it became like parchment.”

Then came the biggest challenge: a Yup’ik woman had to stitch the pieces together very carefully. “If you have no experience in this,” says Elaine Kingeekuk, a Yup’ik elder and gutskin sewer who now lives in Anchorage, “it’s a difficult material to work with. It’s like trying to sew tissue paper.” As a girl, Kingeekuk struggled to get the stitching right, raising her mother’s ire when she made a mistake. “I started trying to make a stitch and it would break through or be too big, and sometimes it would rip right through.”

The parka shown above, in the collection of the National Museum of the American Indian in Washington, D.C., has several stylish touches, from a baby-walrus-fur trim to the sealskin strips adorning the hood. But the most impressive ornaments are the small orange beaks and black feathery crests from crested auklets. “That just blows me away,” says Linn. “Each auklet has only one of those crests. So not only is it something beautiful, the crests also show that someone is a very good hunter.”

According to Kingeekuk, such fine ceremonial parkas are no longer worn today on St. Lawrence Island, but she and other Yup’ik elders are trying to keep alive the tradition of working with gutskin. Kingeekuk herself eventually came to master the art of stitching the parchment-like material, and she has given workshops on the technique in Alaska. Several years ago, when curators at the National Museum of the American Indian needed to find someone to repair tears and rips in the auklet-crest-adorned parka, they called her.

“I was fortunate and happy to do that,” Kingeekuk says. “It was a special thing, and I felt like I was a surgeon doing surgery on a living person.”