From Northern British Columbia to Oregon, salal is turning brown and dying. Scientists are not sure why. Photo by John Roberts/Alamy Stock Photo

British Columbia’s rugged and rain-drenched coast supports forests of western hemlock and red cedar, but it’s salal, a hardy evergreen shrub, that might be one of the region’s most important species. In the temperate coastal rainforest of the Pacific Northwest, the plant grows in thickets up to five meters high, forming dense walls that protect the coastal forest’s understory from the ocean’s punishing wind and salt spray. Deer, bears, and even wolves feast on salal’s sweet berries, as do Indigenous peoples, who, for thousands of years, have made the plant a central component of cooking and medicine. But in recent months, reports of dead and dying salal in British Columbia have accumulated. More troubling is that no one knows for sure what’s killing the plant. Some scientists theorize that a disease or fungus could be the culprit, while others point to this past winter’s unusually dry weather.

Nancy Turner, renowned ethnobotanist and professor emeritus at the University of Victoria in British Columbia, first observed dead leaves on Calvert Island on the central coast of British Columbia during the summer drought of 2014. Since then, as extreme drought conditions have become the new normal, she says the situation has worsened, with sightings of dying salal extending to Haida Gwaii in Northern British Columbia and south to Oregon. Hakai Magazine spoke with Turner about the ecological and cultural importance of salal, and what it means for the West Coast if it loses this iconic species.

For decades, you have worked with First Nations to record traditional plant knowledge. How is salal significant to coastal Indigenous communities?

Nancy Turner: For First Nations, [salal berries] are one of the most important of all the fruits because they can be mashed and cooked easily—parboiled using red-hot rocks. In the old days, the cooked berry mixture was spread on skunk cabbage leaves and allowed to dry. It took about one good, hot day to dry these berry cakes and then they could be stored away for winter food. To know how to store food for winter on the West Coast was a very important skill because there were not very many edible things available at that time of year.

When people cooked food like clams or root vegetables, armloads of salal branches were placed in cooking pits. The leaves prevented the food from being burned by the red-hot rocks and they also flavored the food. Sometimes, people would put the leaves—just one or two—in a fish stew, sort of like how people use bay leaves in cooking.

And people also use salal leaves as a poultice for cuts and wounds. The Gitga’at kids up in the Hartley Bay area make headbands from them by pinning the leaves together side by side with sticks. You can make a nice little crown that way.

So, salal was one of the things that contributed to the very vibrant First Nations communities all along the coast. There are names for salal in every language, which is indicative of its widespread use. Salal was one of only 30 or 40 edible plants universally known by Indigenous peoples up and down the coast, from Alaska to Oregon. 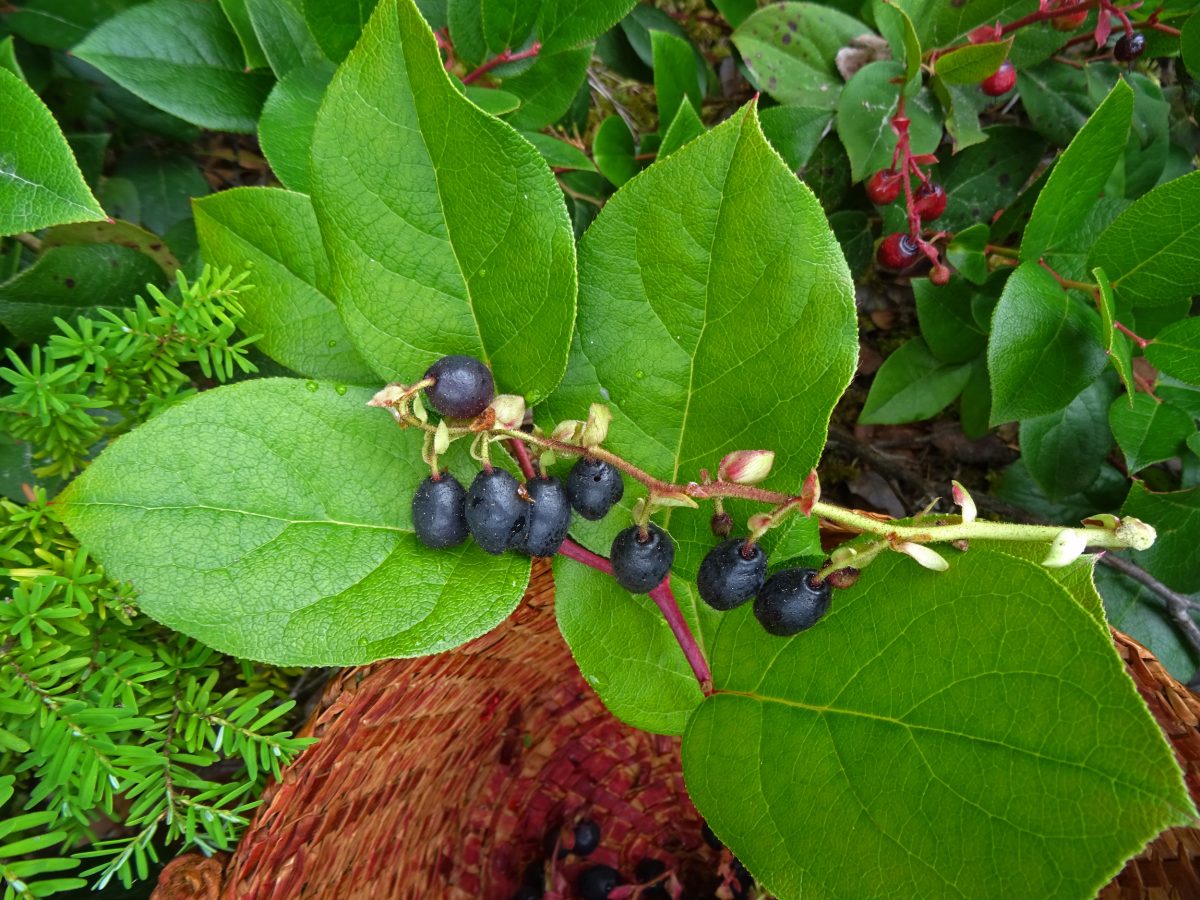 What can you tell me about these reports of dying salal?

Turner: A few years back, when I was up at the Hakai Institute on Calvert Island, I took photos of some dying salal plants. Multiple twigs with multiple leaves were dying all at once, within a stretch of a couple of months.

Now it seems to have spread. I got photos sent from the Gitga’at Nation area, where there are whole thickets of dead salal. In some cases, it looks as if it’s the young leaves that are dying. It’s one thing for the older leaves to die, but when the whole shoot is dying off, including the young leaves, that’s really concerning. It seems that there are whole plants that are dying or at least whole big branches of the plants.

Do you have any idea of what’s killing the plant?

Turner: I don’t think that we know what’s causing it yet. It could be a fungus. It could be some kind of disease. But I think it’s partly related, at least, to climate change. The salal can’t withstand the summer drought. It really thrives in the moist coastal temperate rainforest, and so when those conditions are removed, even for a short period of time in the year, that can be the breaking point. And that could weaken them and make them susceptible to some kind of disease.

If salal died en masse, what would be the ripple effect across the coast?

Turner: Oh my gosh, I’d hate to say it, but the coast would change dramatically. The removal of such a cultural keystone species would change communities. People who have picked salal berries as food for thousands of years wouldn’t be able to get them anymore. It would be catastrophic, in my view.

And then of course there are all the other impacts: to the songbirds and the deer and the bears, the wildlife in general. We know that in bad berry years, they really suffer, and if something like salal stops producing its berries, if it dies out, it will have a cascading effect through the ecosystem.

This footage showing the salal die-off along the coast of Calvert Island, on British Columbia’s central coast, was taken in May 2019. Video by Keith Holmes/Hakai Institute

It’s troubling, isn’t it? To think about the loss of this cultural keystone species and how it could permanently affect the knowledge passed on by Indigenous peoples.

Turner: Exactly. You can restore the plants—we could probably plant salal out and keep it watered and restore it—but once the knowledge about its use is [gone] … it’s very hard to restore that knowledge.

That’s what I think about when I think about salal: that if people had to stop using it because it disappears, or it stops producing really good berries, or they don’t have access to it anymore, then all of the knowledge about how to use them, how to serve them—and even the taste of them—will go as well.

If past summers are any indication, coastal British Columbia is in for drier and hotter weather. With that in mind, do you have any hope that salal will recover?

Turner: I’m very concerned about changing climate, not just for its impact on salal, but for its impacts on multiple species and habitats. Salal is just one indicator of that concern.

I don’t think salal is going to die off altogether. There are places that will remain wet enough and cool enough that it will survive, but I think its range will probably diminish with climate change.

I do, actually, have hope because nature is amazingly resilient. If you look at a clearcut where all the vegetation looks like it’s totally gone—it’s like a desert—there are plants living under the ground that sprout up within a short time. It’s not going to be the same forest as it was, but the forest does return, even from really badly decimated landscapes. And salal is an amazing shrub that can spread through its seeds and sprout up from its roots. Even if there’s just a little bit left in the ground, it can reestablish itself. We also know that there are some strains of plants that are more resistant to disease than others, and so even if there are just those populations that remain, they will have the capacity to regenerate themselves and to spread out again through the forest. And that’s, I think, our biggest hope.