In the 1800s, the must-have coat in the Amur region of Siberia was made of fish skin. Photo: Collection Nationaal Museum van Wereldculturen. Coll.no. RV-434-1

Along the lower reaches of the Amur River, where the water empties into the Pacific Ocean, the climate—unlike most of Siberia—is wet. To keep dry, the indigenous Nivkhi shrugged on fish skin coats like the one pictured here. These ingeniously constructed coats are a testament to the people’s holistic approach to natural resources; they also tell the story of a worldly culture and a wild place.

A merchant working for a trading house in Vladivostok, Russia, collected this coat sometime between 1874 and 1898. Adolf Wassiliwitch Dattan, an imperial commercial agent with the German firm Kunst and Albers, amassed hundreds of indigenous artifacts over the years he was stationed in the Amur region. He donated his collections to several European museums, including the National Museum of World Cultures in Leiden, Netherlands, where this example of Nivkhi artistry is on display.

Fish skin is light, flexible, strong, and easy to work—the Gore-Tex of its day. Matchless as rainwear in milder seasons, layering fur close to the skin kept people cozy in winter. A Nivkhi woman—for only women sewed—prepared 100 salmon skins for this particular coat. She would have scraped away the flesh before washing the skins in salt water (women keeping the craft alive today use soap), then drying and beating the skins before piecing together the coat with thread fashioned from fish skin or sinew. “When it gets wet, [the thread] expands and fills the hole made by the needle, making the seams watertight,” says Cunera Buijs, the museum’s curator of Arctic regions. “It’s so clever.”

Design of this indispensable outerwear was just as important as construction, and it’s where the Nivkhi people’s sophistication shines. In the paper, “Layers of Meaning: Clothing on the Amur,” Buijs and Sudha Rajagopalan delve into the history and significance of Nivkhi dress. Living at a crossroads in East Asia—where people from Korea, Japan, China, and other neighboring lands regularly traveled—imagination, inventiveness, and materials have flowed in and out of their homeland for thousands of years. The arabesques—looping, entwined tendrils or lines—embroidered on this jacket have a long lineage. Ancient creators of pottery, petroglyphs, and other artifacts played with arabesques in patterns that show up in neighboring cultures in Korea and Japan, and in far-flung indigenous cultures in North America, Indonesia, and Polynesia.

Young women made several coats before they wed. Practical, yes, but their skills also broadcast their suitability as marriage partners in this challenging natural environment. “Women who were able to make beautiful clothing that was waterproof and protected them from cold had a very good marriage,” Buijs says. 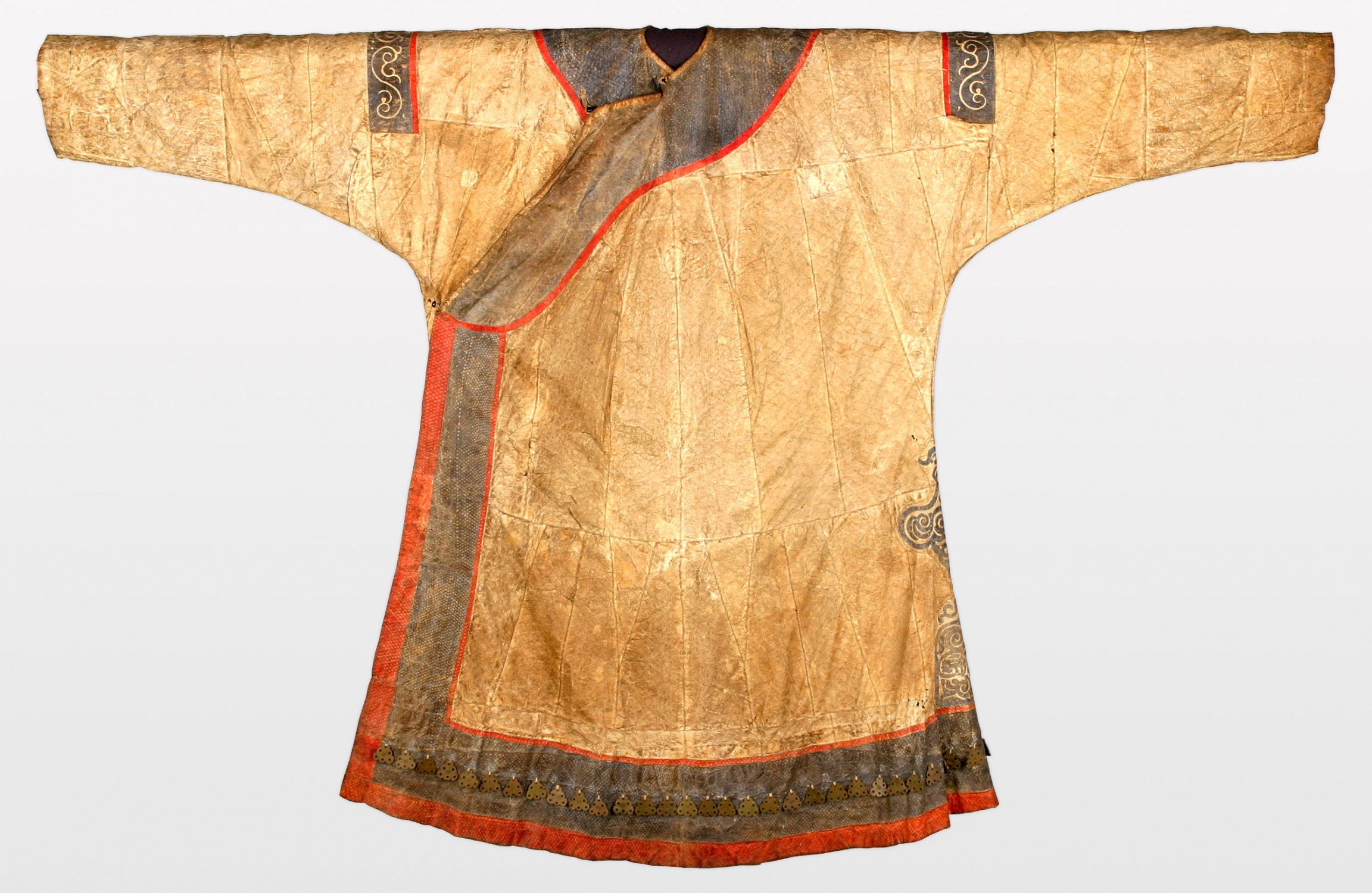 Practical and gorgeous, though inanimate, the silent coats spoke volumes. The embroidery conveyed a message that communication taboos between women and men restricted. “If people visited, women couldn’t look at visitors,” Buijs says. The front of the coats were plain, but the backs were highly stylized. “Women sat at the fire, with their backs to visitors, but that back side was beautifully decorated—their backs said so much more than their faces.” This coat features blue-black arabesques on the back with small copper disks on the hem, which jingled when the woman moved. Clearly, it is not a man’s coat since men hunted and the sound would have given them away.

The blue-black and red-dyed borders along the collar and hem of the coat denote a Chinese influence. Despite outside cultural influences on design, the ritual of sewing was always grounded in the Nivkhi universe, where respecting the power of the wild was elemental to their spirituality. Seamstresses showed deference to the natural world through their skill. To create clothing meticulously with an eye toward beauty assuaged the spirits of hunted animals and connected the two beings—wild and worldly.