In Bali, Indonesia, the nonprofit organization Sungai Watch is using floating barriers in the country’s rivers to corral garbage before it hits the ocean and beaches. Photo courtesy of Sungai Watch

As scooters zip across a brick-walled bridge, about five kilometers from the Indian Ocean beaches of Bali, Indonesia, Made Bagiasa scythes young bamboo from the riverbank while Gary Bencheghib loops steel cable around a sturdy mango tree. In the river that divides the pair, hangs a metal grid topped with tubular PVC floats, a low-tech answer to the island’s very modern problem: plastic trash.

Bali’s tropical beaches and warm blue waters have drawn travelers since the 1920s. Even in the midst of the pandemic, nomads and expats still frequent the island’s surf camps, restaurants, and yoga studios; elsewhere, desolate budget hotels, desperate beach vendors, and deserted swimming pools, now breeding grounds for mosquitoes, pay testimony to COVID-19’s impact. Yet the Island of the Gods’ resilient brand of Hinduism endures. The rituals that set the rhythms of the year and the offerings that decorate almost every corner express devotion to harmony with god, nature, and humankind.

Despite the island’s profusion of sacred springs and water temples, and although river water is used to cleanse bodies before cremation, the waterways which have defined Bali’s landscapes for over 1,000 years are dumping grounds for trash. A 2021 New Year’s cleanup removed over 30 tonnes of marine litter from sweeping Kuta Beach and neighboring beaches. In 2018, a sperm whale washed ashore in an Indonesian national park, its stomach clogged with nearly six kilograms of plastic waste. Although the tourism ministry funds regular beach cleaning, plastic trash still pollutes both rivers and ocean.

Bali’s government has banned styrofoam, plastic straws, and single-use plastic bags, but the regulations are often ignored. In Indonesia, as in many lower-income countries, people often buy products such as shampoo in non-recyclable single-dose sachets, which strain budgets less than better value but more costly bottles; and no office or social gathering is complete without trays of Danone’s Aqua water, sold in single-serving plastic cups. (One hundred and fifteen plastic cups were found in the stomach of the beached sperm whale.)

Although some of the trash on Bali’s western beaches likely comes from the neighboring island of Java—barely two kilometers away at its closest point—the island’s rivers are a major contributor.

On the riverbank, Bagiasa hammers a steel stake into the cleared ground, anchoring the barrier. As we watch, a drifting Aqua bottle wends its way to the floats and spins, trapped, the first in an apparently never-ending flow of garbage down this sluggish, slender stream. Bencheghib’s organization, Sungai Watch, has now installed 100 such barriers on Bali’s rivers to trap waste before it reaches the ocean. (The word sungai means “river” in Indonesian.) Between November 2019 and July 2021, the barriers intercepted 650 tonnes of waste.

Bencheghib grew up on Bali after his family relocated from Paris, France. Horrified by the experience of surfing surrounded by floating plastic, he and his two siblings organized their first beach cleanup as teenagers in 2009 under the banner Make A Change. 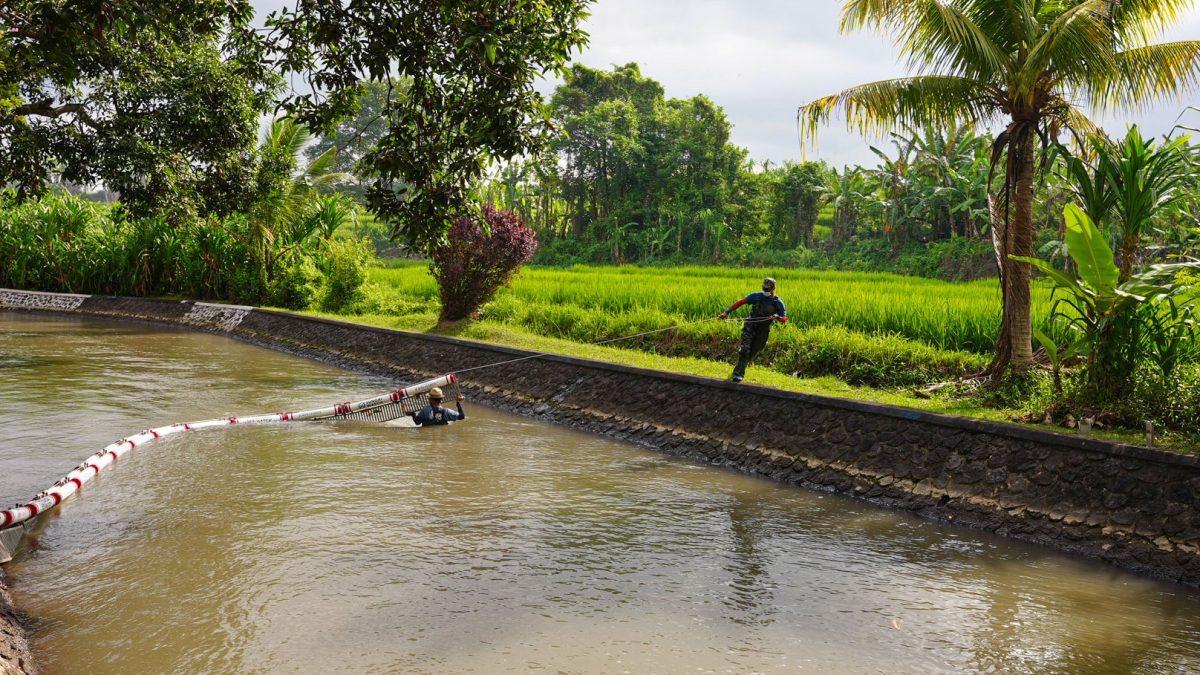 Bencheghib left the island to study filmmaking in New York City and began using this skill to raise awareness of the role of rivers in ocean pollution. In 2016, he and some friends sailed the Mississippi River on a raft made from 800 plastic bottles. The next year, alongside younger brother Sam, he paddled a kayak crafted from plastic waste down the Citarum, a waterway on Indonesia’s most populous island, Java, that some claim is the most polluted river in the world.

The stinking journey, through waters fetid with dead animals, effluent from textile factories, and plastic waste, intensified Bencheghib’s loathing of pollution. “That expedition changed our lives forever,” he says. “Instead of icebergs, you call them plastic bergs—and we were stuck in a bunch of plastic bergs. We couldn’t move. … We had to literally lift the kayaks up and walk along the side.”

Sungai Watch evolved from Make A Change’s organized beach and river cleanups, and Bencheghib worked with river barrier designers Plastic Fischer to place his first installation in November 2019. Although he had permission from the authorities, local villagers were initially suspicious, wanting to know who would take responsibility for clearing the trash the barrier collected. 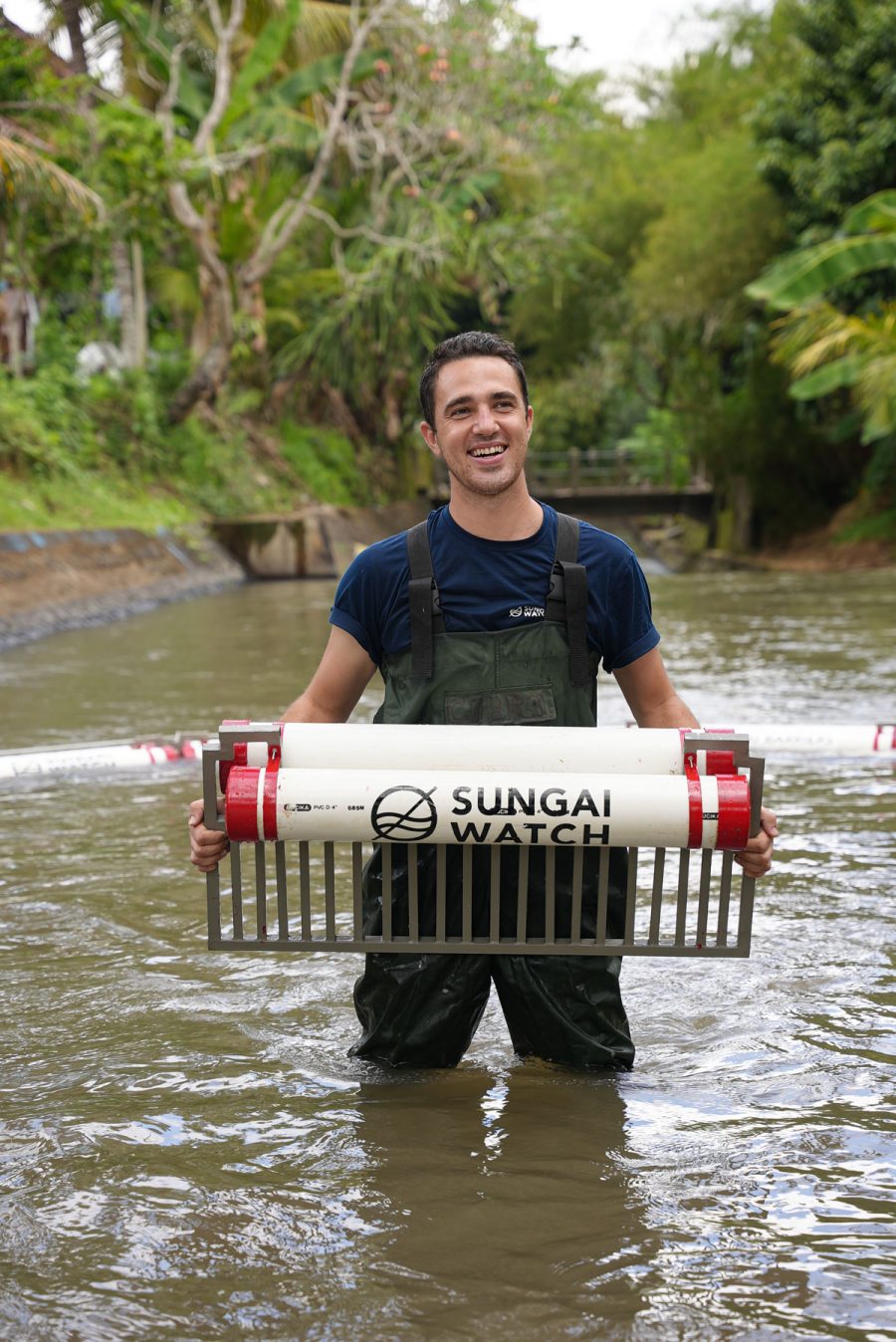 Gary Bencheghib founded Sungai Watch, which installed its first river barrier in 2019. Here, Bencheghib holds up one element of a barrier—a float that holds a grid vertically in the water—at the installation of the organization’s 100th barrier. Photo courtesy of Sungai Watch

Bencheghib collected the waste himself at first, sorting it in his parents’ garage and sending it to a local recycler, but sponsorship from the World Wildlife Fund for Nature enabled him to secure a base for the project and hire his first team members. In August 2020, in the teeth of the pandemic, he began to source sponsorships from businesses, including Indonesia’s bestselling beer brand, Bintang. For an annual commitment starting from three million rupiah (US $210), organizations can have sections of a river barrier branded in their name.

Since then, the team has expanded rapidly, and now has 40 employees, all paid above the legal minimum wage for the area (around $205 per month). Five dedicated teams make daily rounds of the barriers to remove the waste. And that’s no small task: the first Sungai Watch installation intercepted 2,200 kilograms of plastic waste and 585 kilograms of organic waste in just 230 days. Sungai Watch barriers allow fish to pass through and can withstand rainy season floods that could raise the height of a river by three meters or more. For wider, deeper rivers, the team repurposes secondhand 19-liter plastic water drums to create a floating platform that collectors can walk along.

At their headquarters, down a sleepy road surrounded by rice fields, not far from the surfing beaches of Canggu, Sungai Watch employees process around two tonnes of river trash each day. Beside a traditional Indonesian wooden joglo house, screeching angle grinders flood the air with sparks as men assemble trash barriers and women clean, sort, and audit plastic waste, some destined for resale to recyclers. Murky water churns in homemade machines that wash the river mud off plastic bags for resale. Organic material, which spans the gamut from driftwood, Hindu offerings, and green coconut shells to rotten produce from the markets, is processed into compost in neat piles and baskets. 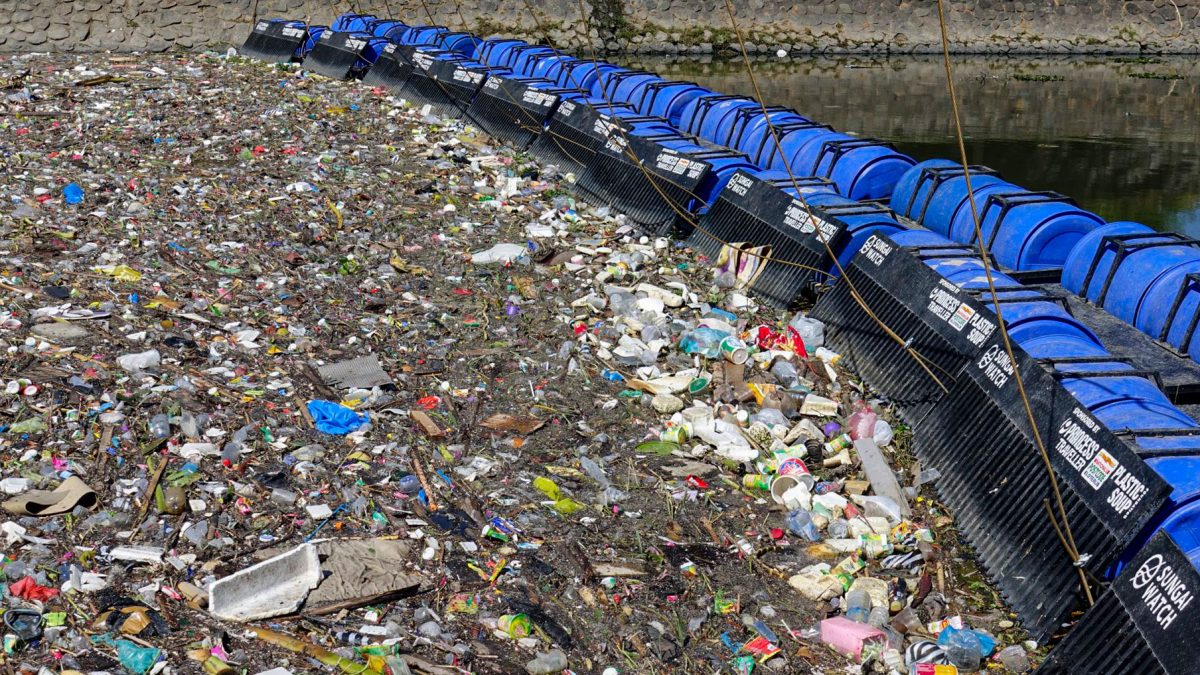 A Walker Barrier made of plastic drums holds back one day’s worth of trash. Photo courtesy of Sungai Watch

Despite the best efforts to reuse and recycle, some trash, including the noxious plastic bags of disposable diapers found on every single cleanup, still ends up in a landfill.

Besides handling river trash, Sungai Watch also works alongside volunteers and pays members of the local community to clean up illegal waste dumps: a 22-hectare mangrove site on a river estuary yielded 80 tonnes of plastic, some embedded a full meter deep in the soil. Increasingly, Bencheghib’s team is engaged in working with local authorities to help them manage their own waste.

Most of Sungai Watch’s staff originally worked in Bali’s tourist industry, which has been decimated since Indonesia closed its doors to foreign tourists in April 2020. Women who had worked laundering sheets and towels now sift through trash; Bagiasa, Sungai Watch’s head of cleanups, used to manage hordes of taxis at the island’s airport, which welcomed over six million foreign tourists in 2019. With Indonesia still mired in the COVID-19 crisis and Bali’s largest tourist markets, Australia and China, still effectively closed to overseas travel, it’s unlikely the island will see such numbers any time soon. 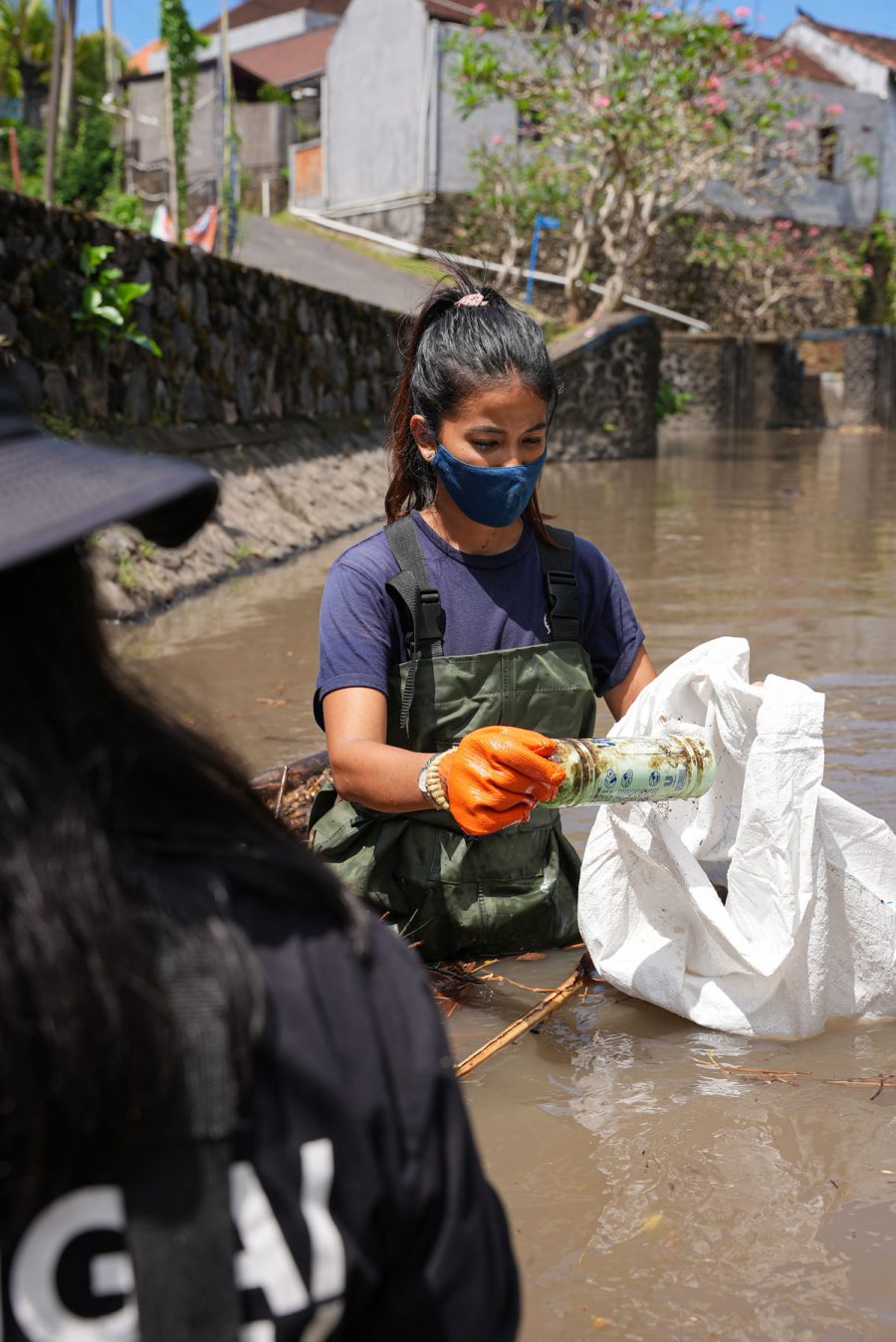 Nyoman Muditha, a slender, sinewy man with a gentle smile, worked as a cleaner on Kuta Beach from 1975 to 1998, rising before dawn to pick trash from the sands. Today he is a priest, performing Bali’s timeless rituals, and leads a local waste management project for Sungai Watch.

In his neat compound above a pristine river bend with a trash-free Sungai Watch barrier, chickens and cockerels scratch behind a wire fence while orchids and frangipani grow as gifts for friends. Muditha proudly displays water bottles crammed full of candy wrappers, rescued from the river: he is planning a campaign against these candies, which sit alongside flowers, snacks, incense, and, often, cigarettes in Bali’s handwoven offerings, and whose wrappers, like other street garbage, are swept into the rivers when rain falls.

In his neat garden, he is growing reedy shoots of vetiver grass in bamboo tubes, part of a Sungai Watch project to strengthen riverbanks and help purify the water. “The river should be sacred: it comes from Wisnu,” Muditha says, using the Balinese name for the Hindu deity Vishnu. “The flow of the water brings life for families and farmers. … In Bali, we need to keep the rivers clean and sacred.”

Faced with the paradox of a deeply religious society that nonetheless mistreats an environment theoretically held sacred, Muditha believes that older generations have failed to educate the youth. Older Balinese grew up when the population was both smaller and poorer, and used organic wrappings such as banana leaves that could be thrown into rivers without consequence, unlike today’s plastic packaging.

Yet waste management is also a structural problem, especially as collapsing local government budgets divert funds to the COVID-19 crisis and household incomes tumble. Waste collection is usually a paid service on Bali and, while freelance scavengers pick through household garbage for items that can be resold or reused, formal recycling options are relatively costly. 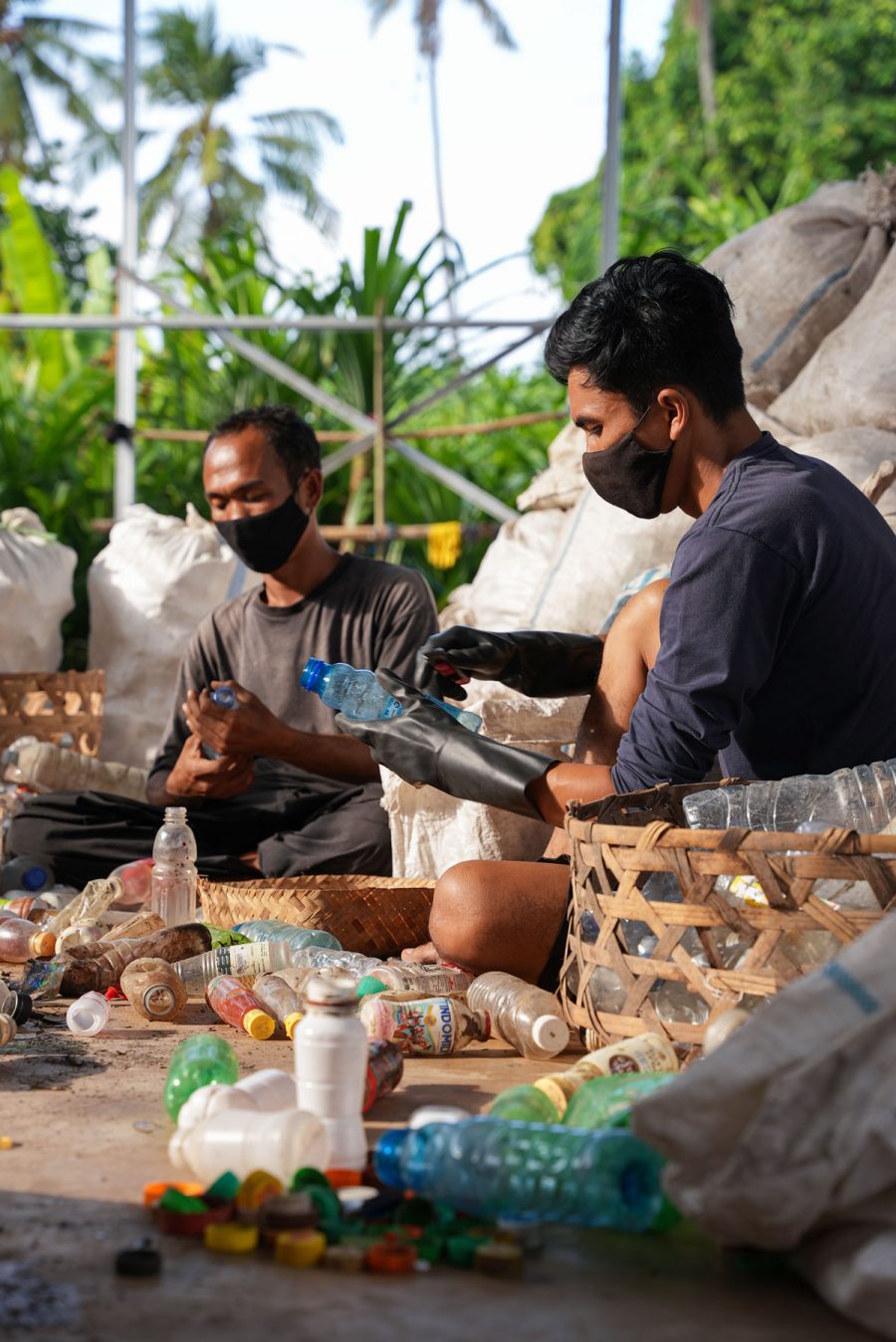 Sungai Watch relies on teams of community volunteers, such as these two men sorting plastic bottles retrieved from a trash barrier. Photo courtesy of Sungai Watch

Because there is little awareness of the damage that river trash can work on the ocean, education forms an ever-increasing part of Sungai Watch’s work. Nola Monica, who worked in villa rentals before joining the group, now leads education and outreach programs, presenting to village leaders and influential members of the community.

As an example of the need for education, she likes to tell the story of a woman who blithely returned to throwing trash in the river once she saw a barrier had been installed—she no longer felt guilty about disposing of her garbage, now that people were there to clean it up. The ultimate goal is not merely to intercept plastic trash before it hits the ocean but to change the mindset that put it there.

Bali’s main landfill is already at capacity and set to close, so waste management will be decentralized to the leaders of Bali’s 636 desa, an Indonesian word for “village” that also describes small local government units. Bencheghib aims to empower communities to manage their waste effectively, with solutions including composting, salvaging plastics for resale, and farming maggots on organic waste to be used (or sold) for chicken feed. The barriers, designed to be easy to move, will be transferred farther upstream as individual communities begin to manage their waste effectively.

Progress extends beyond the tonnes of trash saved from the ocean. Rivers, including Muditha’s, are visibly cleaner; the volumes of garbage caught by the barriers is decreasing, particularly in villages where Sungai Watch works closely with community leaders on education. In June 2021 alone, the team collected 506 kilograms of plastic cups and close to 10 times that weight in plastic bags. Volunteers are traveling from across the island to participate in cleanups.

But, even as he begins expanding his venture to Java, Bencheghib remains aware that hearts, minds, and habits take time to change. “Things go very slow here on Bali,” he says. “And that’s something that we tend to forget. In terms of changing mindsets, it’s not going to be one event, it’s going to be maybe 10 or 15 or 20 different events for that one person.”