Dedicated teams of cavers are exploring and mapping lava tubes—caves through which lava once flowed—on the island of Santa Cruz in the Galapagos. Photo courtesy Aaron Addison

It is hard to know where the sweat stops and the rain begins. The air is muggy when Aaron Addison and his team start their steep climb, then a Galapagos deluge begins, saturating their thick pants and heavy packs. Despite the uncomfortable hike, it’s worth it for the small team of speleologists. They’ll soon descend through an opening in the ground to a world few will ever see.

They have come to the island of Santa Cruz to explore lava tubes, caves born of ancient rivers of lava. Their detailed field notes, taken over five expeditions, are slowly helping to map this enigmatic ecosystem. And they’re also recording what lives in the lava tubes—the “troglofauna,” organisms adapted to a subterranean life.

Santa Cruz formed when the earth’s molten core burned through its thin crust. Lava piled upon lava until it breached the ocean’s surface somewhere between 0.7 and 1.5 million years ago. But the lava kept flowing, oozing down the sides of the island’s shield volcano in viscous molten rivers. In places, the top layer of the lava cooled, slowed, and eventually hardened. But lava is an extraordinary insulator, so beneath this “roof,” superheated lava continued to flow, often for several kilometers. When the volcanic activity ceased and the molten river drained away, the caves remained.

It is these artifacts of the island’s volcanic history that Addison—an expert in geographic information systems from Washington University in St. Louis, Missouri—comes to explore and map at every opportunity. Knowledge of this subterranean landscape is foundational, especially for a habitat so poorly understood yet of interest to science and the tourism industry. “[Once we have a map,] we can then engage in various types of scientific study or perhaps management activities if there’s … visitation in the caves,” says Addison. 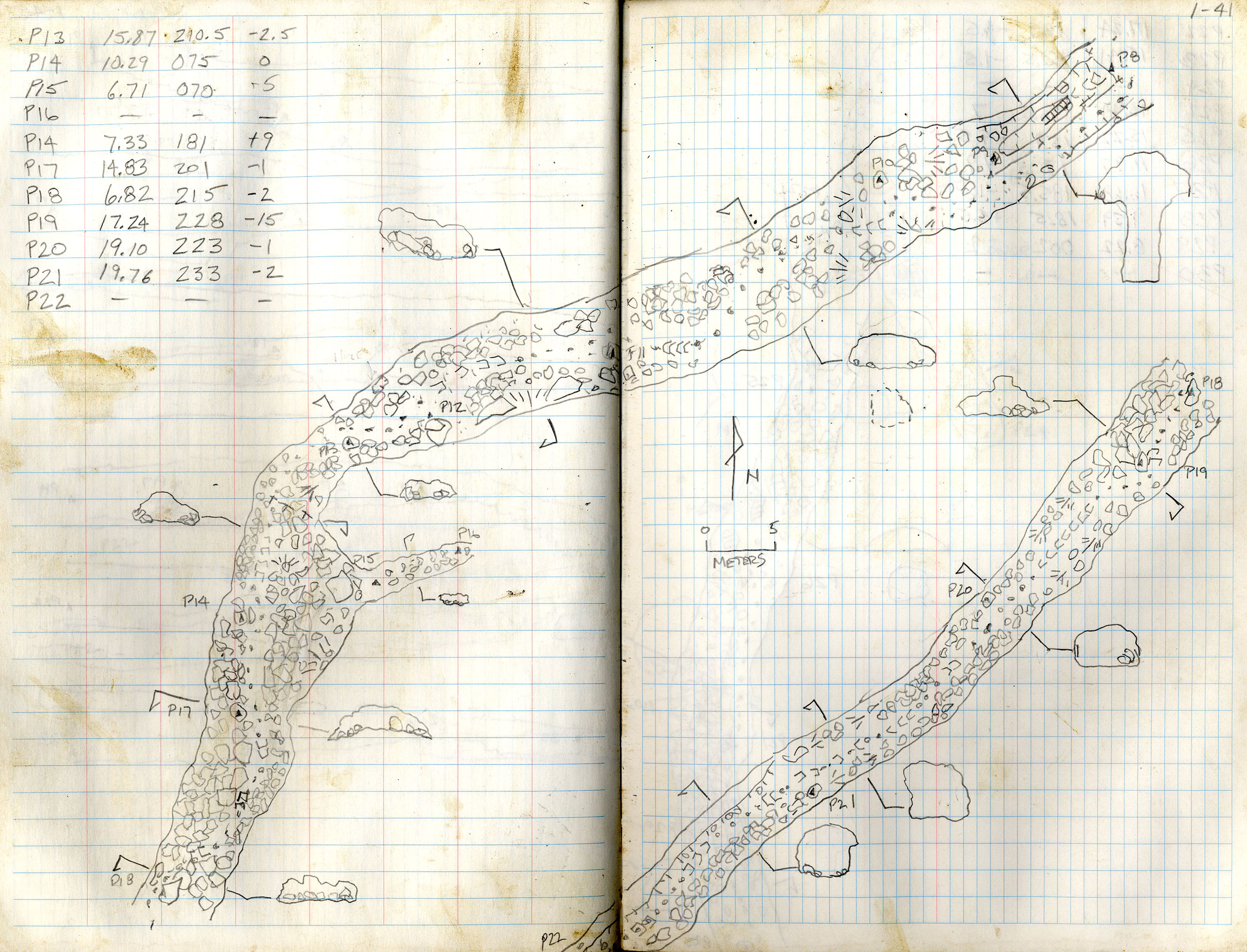 Aaron Addison’s field notebook from a Santa Cruz lava tube. Small teams use low-tech gear to measure distance, heading, and elevation between stations. Addison uses the measurements to create a plan view of the cave and also sketches a cross section at each station. Image courtesy of Aaron Addison

To map the lava tubes, they use a blend of low and high tech. Global Positioning System devices can be used to precisely record the location of the entrance, but since the devices don’t work underground, the team uses simpler technologies—laser distance meters, compasses, clinometers—to capture the cave’s dimensions. Later, they use computer programs to convert the detailed field notes into plan and profile views of the lava tubes.

The team also looks for signs of life. Since the caves are so undisturbed, it’s relatively easy to find a biological grail—a species new to science. Addison has seen spiders, tube worms, bacterial “mats,” and dozens of odd organisms few people know much about and no one has identified. In 2014, Addison and six of his colleagues took steps to change that when they co-authored a paper describing a new population of velvet worm. The abstract describes the worm as possibly being “troglophilic”—cave loving. How appropriate to be discovered by fellow troglophiles, working diligently to map a rare, and largely unprotected, habitat.