Rockfish, like this tiger rockfish, are known for their big eyes, robust bodies, and spiny dorsal fins. Photo by Fred Bavendam/Minden Pictures

On a sparkling summer day, bull kelp sways lazily in the currents on the west side of Galiano Island, British Columbia. Sportfishing vessels slice the cobalt-blue waters of Trincomali Channel. Sunshine filters through a shoreline forest—Douglas fir, bigleaf maple, arbutus—exuding the sweet smell of strawberries.

This is the last place I would expect to find a spy camera—yet there it is, a brown, book-sized device strapped two meters above ground to a tree. The battery-operated remote trail camera is set to take a photograph every five minutes to monitor compliance with federal fishing regulations. The initiative of the nonprofit Galiano Conservancy Association is not meant to take poachers to court, but simply to show that gentler tactics can be a more effective solution.

Galiano and other Gulf Islands are alluring, emerald jewels in the Strait of Georgia. Their proximity to Vancouver Island, Vancouver, and Washington State has long made them popular destinations for residents and tourists alike. Recreational anglers, in particular, like to jig for tasty rockfish, typically found in rocky shoreline habitat up to 200 meters beneath the ocean surface. At least 37 species of rockfish are found in BC waters.

The problem is that many rockfish species are vulnerable to overfishing: they can live for more than a century, are slow to grow and reproduce, and don’t stray far from home habitats. Those rockfish targeted by hook-and-line gear within the inshore waters of Vancouver Island, including the Gulf Islands, are among the most threatened. 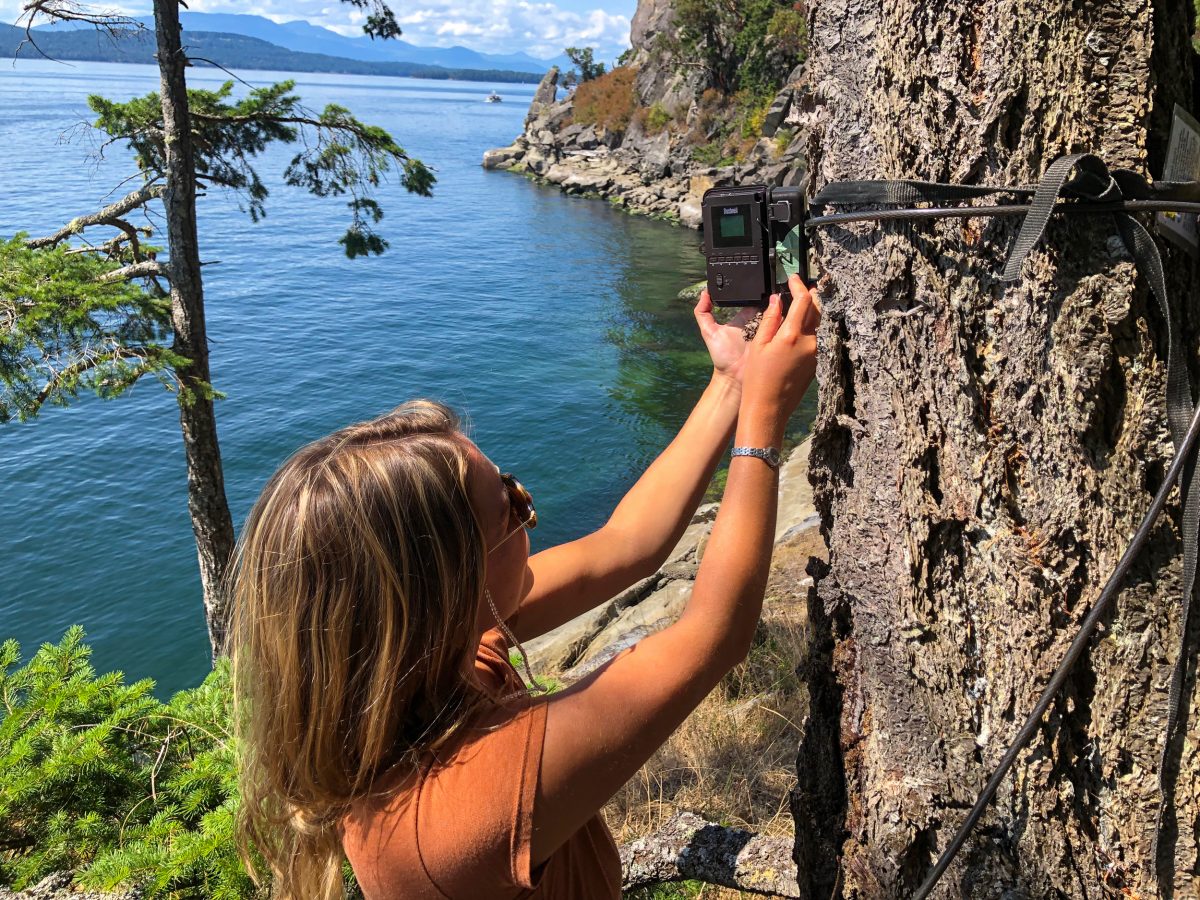 The government thought that these no-go fishing areas would provide refuges for rockfish, allowing numbers to rebuild. The question remains: has it worked?

Clearly, the simple establishment of RCAs is not enough to save rockfish. Neither is the empty threat of federal enforcement and penalties, it turns out.

On Lasqueti Island, to the north of Galiano Island, retired schoolteacher and waterfront property owner Larri Woodrow has a clear view from his kitchen window of sportfishing boats within the Lasqueti Island South RCA.

He has placed more than 70 calls to the federal poacher hotline since 2009 and on occasion has provided photos, some depicting fishers who refused to leave even when he informed them they were fishing in a closed area.

To date, he’s received just three responses from government and hasn’t seen a single patrol vessel show up to investigate. “It’s wrong that those who choose to violate our laws and poach fish from the Crown within closed conservation areas can dine royally without fear of enforcement,” Woodrow laments. 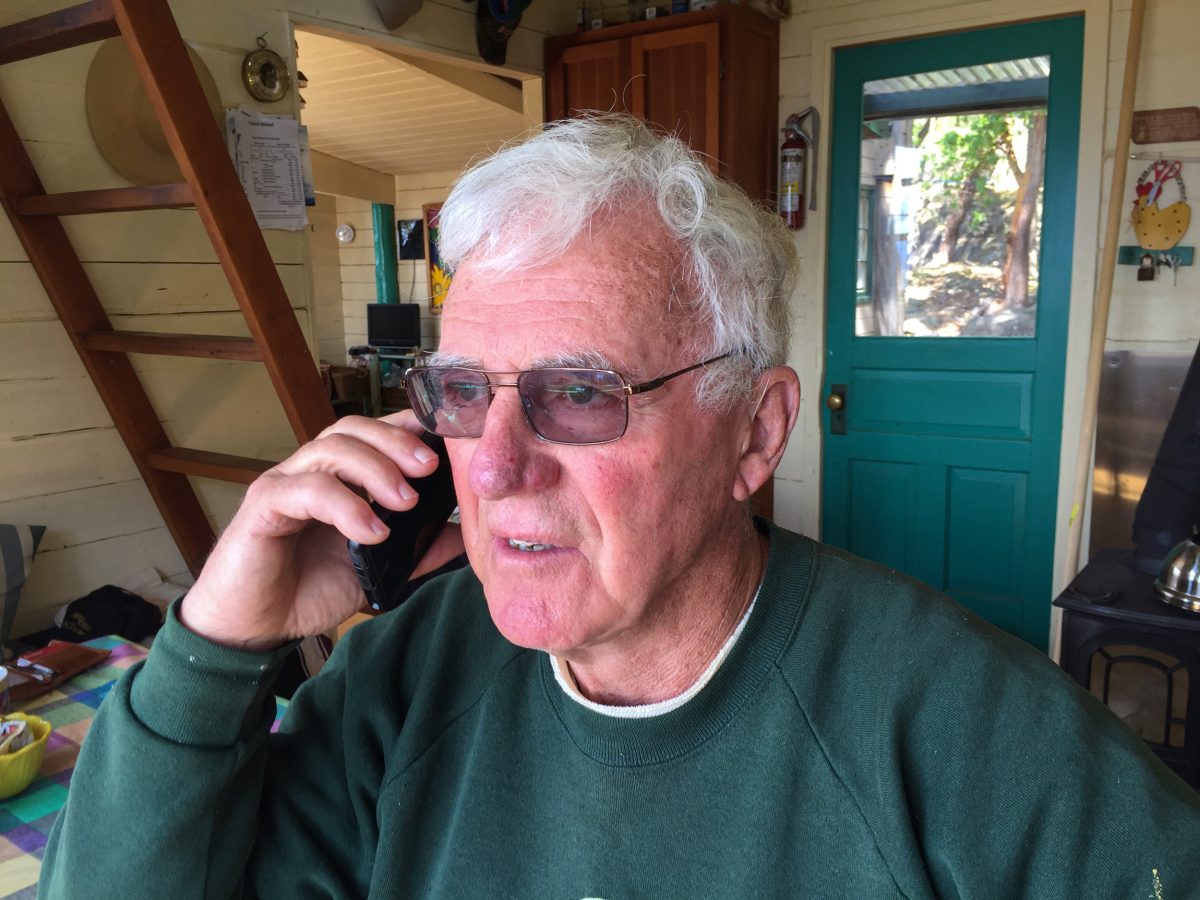 From his waterfront property on Lasqueti Island, British Columbia, Larri Woodrow has a perfect view of a rockfish conservation area, and the vessels sometimes fishing within it. Photo by Larry Pynn

On Galiano Island, residents who had supported protected areas for rockfish also began to express concerns about noncompliance within RCA boundaries and the implications for the fish. Keen to reverse the trend, the Galiano Conservancy Association teamed up with the University of Victoria (UVic) School of Environmental Studies, including two master’s students, to launch a study in 2014 designed to educate fishers and judge compliance within three RCAs around the island. “Most people you talk to in the community have a concern about illegal fisheries in RCAs,” says Madeleine Ankenman, who worked as a biological technician with the association.

Six cameras were placed strategically around the shoreline next to Galiano Island RCAs, and 46 information signs were posted at marinas and docks. The signs provide photos to help identify rockfish, show the boundaries of the RCAs, and offer specifics on the fishing rules. Team members also appear at community events to distribute information on RCAs, explaining how they work and what they are intended to achieve.

In addition, 86 fishers were interviewed over three summers about their knowledge of RCAs and rockfish status generally when they came ashore for gas and supplies at Montague Harbour Marina. Researchers sought information about demographics such as age, gender, and address; habits when fishing for rockfish; and knowledge about rockfish conservation measures. They also asked open-ended questions to solicit ideas to improve rockfish conservation and opinions about whether protective measures are even required.

There’s been a huge range of responses. Understandably, people are more likely to say they’ve seen others illegally fishing in RCAs than to admit doing so themselves. 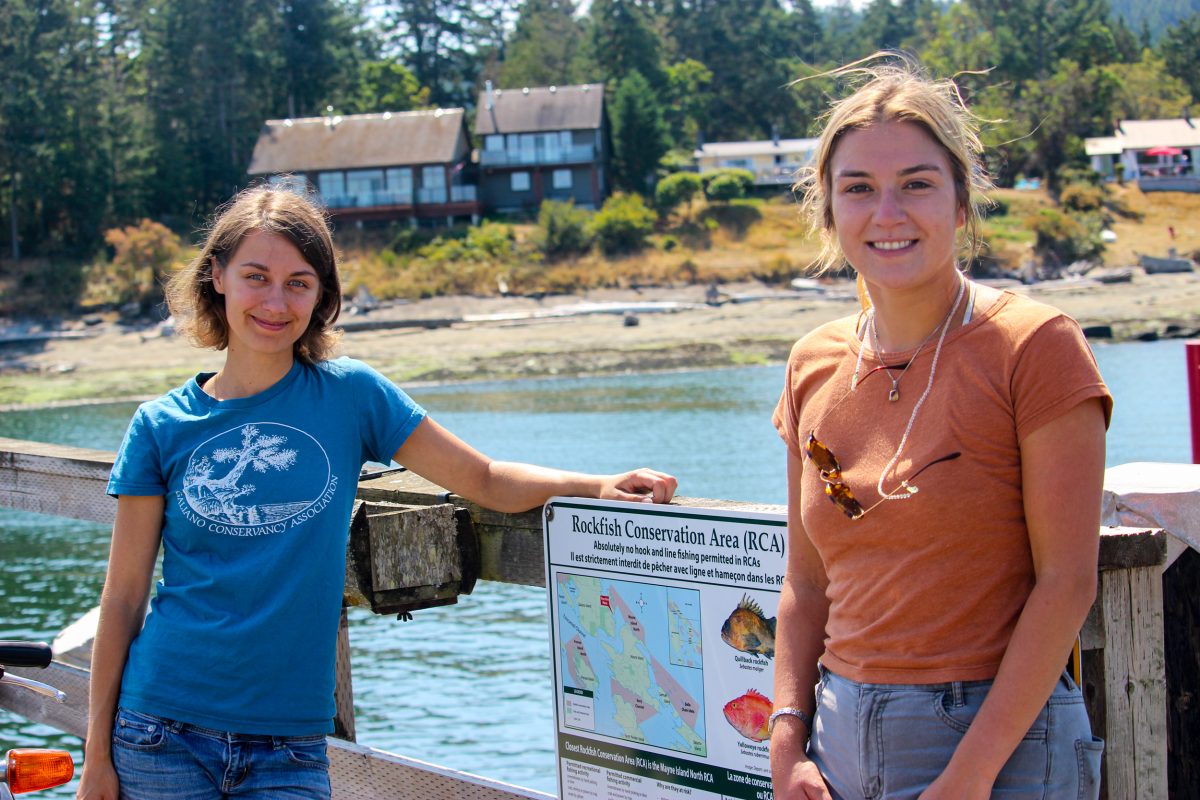 Madeleine Ankenman and Jenna Falk, past development coordinator with the Galiano Conservancy Association, stand near one of their educational signs on a Galiano Island wharf. Photo by Larry Pynn

Ankenman adds: “Some people tell me they don’t believe that rockfish are at low stocks, some people believe there are low stocks but that culling seals would be a better solution, and some people think we should put in fishing seasons, which doesn’t really work for a non-migratory species like rockfish.”

What the Galiano project revealed is that education is critical to conservation. Illegal fishing within the island’s RCAs declined from 42 percent of days monitored by cameras in 2014 to 14 percent in 2018. The interviews indicated that the number of anglers who unintentionally fished with illegal gear in RCAs also dropped from 25 percent to three percent during that same period. By 2018, the project found, 67 percent of fishers interviewed had seen educational materials posted or distributed by the study team.

All parties acknowledge that the federal government’s failure to adequately communicate with fishers is part of the problem.

Dana Haggarty, head of inshore rockfish for DFO, suggests that both fishers and the federal government must share responsibility. “It’s probably a 50-50 split,” she says. “It’s easy for the government to say that as a result of buying a recreational license, it’s your responsibility to be informed. But if you don’t provide tools that are easy to use, you’re really making it difficult.”

Detailed information on RCAs has also not been easily available to everyone buying a federal fishing license, Falk adds. “You’d have to go to the DFO website and pull up information for each RCA and manually input the GPS coordinates or carry around a map and then eyeball the boundaries based on land area. Am I in it or not?” 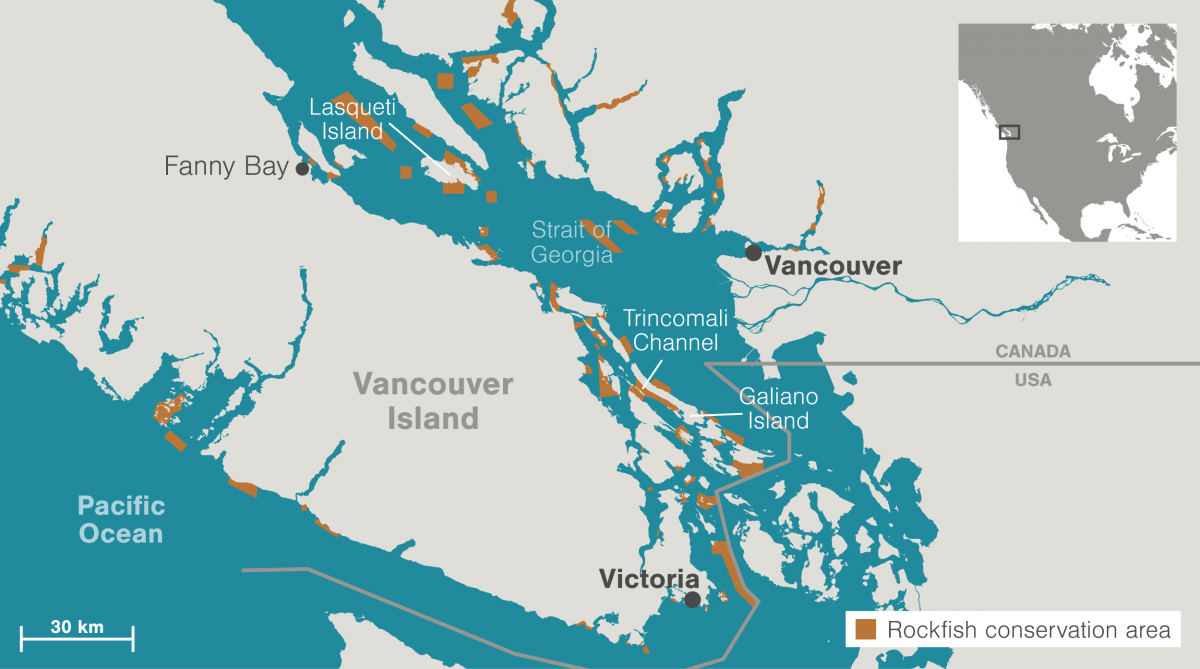 Map data by DFO/OpenStreetMap via ArcGIS

The rules about what you can and cannot do in an RCA are also confusing. All types of hook-and-line fishing are prohibited (except for First Nations), although recreational crab, shrimp, and prawn traps are perfectly legal, as are commercial trawls for scallops and seine and gill nets for salmon.

The outreach initiative on Galiano Island is now entering its sixth year and no one is resting on their successes. Another two cameras were installed in 2019, and there’s a plan to interview 30 more fishers this summer to determine ongoing responses to the education initiatives, although this could be postponed due to COVID-19. “It’s clear that the level of tourism and seasonal users is so high in the Gulf Islands that we can’t stop doing outreach and expect the results to last,” Falk says. “There’s always an influx of new fishers.”

The project received a much-needed boost in August 2019 when DFO and the provincial government announced that UVic and partners will receive close to CAN $800,000 to continue research, including on the effectiveness of so-called “descending devices” that allow fishers to release rockfish at the same depth at which they were caught, so internal gases can recompress.

When hauled to the surface, rockfish experience a build up of internal gases, resulting in a bloated swim bladder, bulging eyes, and the esophagus being pushed into the mouth. (The exact impact varies by depth and species.) When tossed overboard, these rockfish simply flop around at the surface until a predator gobbles them up.

“It’s like scuba divers getting the bends,” explains UVic associate professor Natalie Ban, lead author of the Galiano study. “When a rockfish is pulled to the surface, it can’t adjust to that pressure change.” The Galiano project found that large visual displays at outreach events showing rockfish suffering from barotrauma actually increased public interest in conservation. 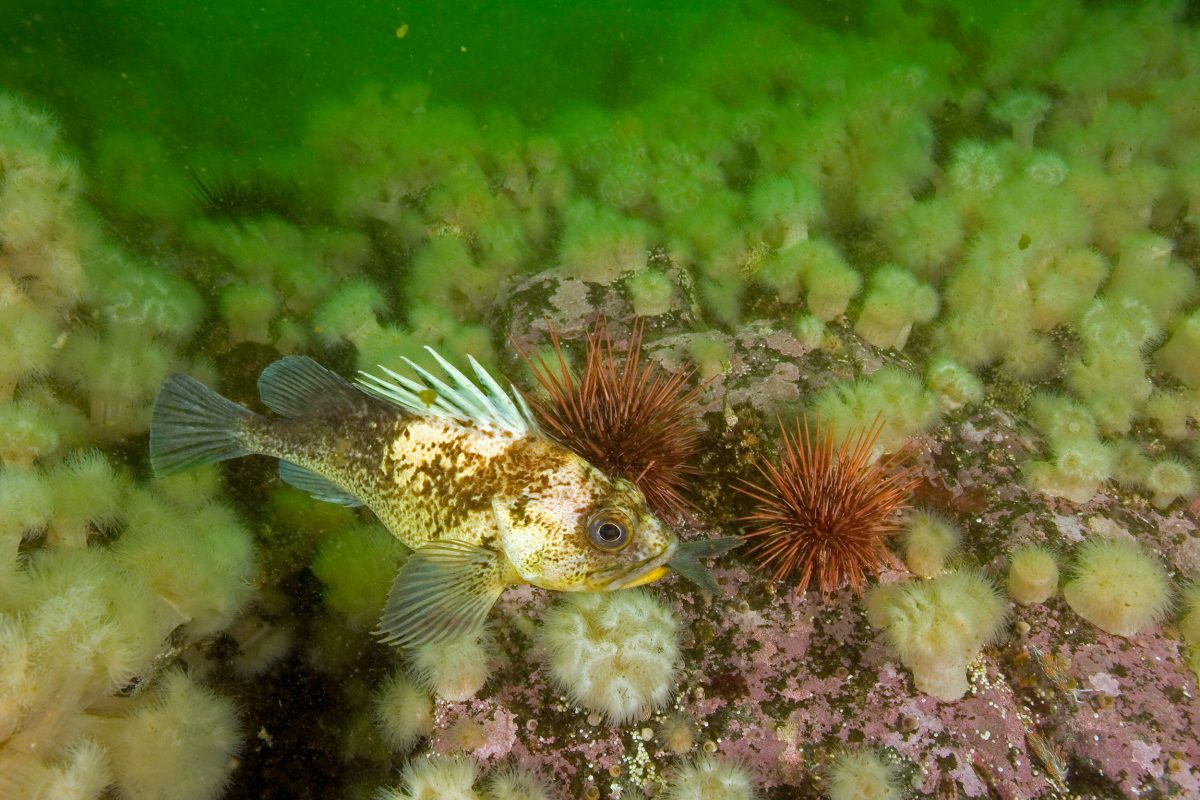 A quillback rockfish chows down on a small fish. Photo by Franco Banfi/Minden Pictures

Not all rockfish are created equally, however.

A recent report by Haggarty noted that long-term survival information is lacking and that a “major uncertainty is the critical depth at which recovery plummets” for each species. With more information, one option might be to prohibit fishing below a certain depth. The federal government is also re-examining the boundaries of RCAs to ensure they capture the best habitat.

UVic researchers will use some of the new federal funding to employ underwater cameras and hydrophones and to conduct a mark-recapture experiment to estimate mortality. The project will also take advantage of ongoing work with acoustic monitoring to relate rockfish sounds to abundance.

In addition, the team will work with Angler’s Atlas—an online resource for fishers that includes maps, hotspots, and boat launches—to expand its free MyCatch app to display RCAs and other marine protected area boundaries, provide real-time alerts when anglers enter those boundaries, give details on regulations, and help with rockfish identification.

“[The project] has been very successful, especially for a small, community-based nonprofit,” Ankenman says. “The results are astounding—both the decline in illegal fishing and the increased knowledge of RCAs. It’s way better than in the past.”

Rockfish experts not associated with the Galiano study are also buoyed by the results to date.

Jeff Marliave, senior research scientist with Ocean Wise, the umbrella organization for the Vancouver Aquarium in British Columbia, says he is encouraged that a “focused effort can yield signs of increased awareness and compliance.”

He suggests the study team consider accessing the records of a DFO observe-record-report hotline for RCAs—encompassing the sort of information that Woodrow provided from Lasqueti Island. Overfishing can be expected to be more extensive in the Strait of Georgia than in less populated areas of the coast, Marliave adds.

The take-home message from the project on Galiano Island is that education won’t stop all rockfish poaching, but it can make a positive difference and just might serve as a model for other coastal communities in British Columbia and beyond looking to steward their marine life.