The European green crab was introduced to the east coast of North America almost two centuries ago. Photo by Andrew J. Martinez/BluePlanetArchive.com

In its path toward world domination, the European green crab—which, as the name suggests, originally hails from Europe, as well as North Africa—has acquired a lot of titles: “cockroach of the sea” and “one of the 10 most unwanted species in the world.” In Nova Scotia, fisherman Jeff Roy has come up with his own moniker.

“I’ve nicknamed them sea ticks, because they’re just as lively,” he says. “They’ll give you quite a bite, too, when they grab ahold of you.”

Their aggression extends beyond people; wherever they’re found, green crabs snip and uproot marine plants such as eelgrass and dig into sand and mud in their search for prey, which includes small fish, clams, mussels, and even each other. Their voracious appetites have been credited with the decline of the soft-shell clam fishery in the Gulf of Maine, and their impact in Nova Scotia has prompted a coalition of Parks Canada officials, fishers, and researchers to repel the invaders by expanding their list of titles to include everything from “lobster bait” to “source of bioplastics” in the name of making green crabs commercially useful and thereby restoring equilibrium to the ecosystems they’ve taken over.

The green crab has been present in North America for more than 200 years, having likely arrived in the United States in the ballast water of ships crossing from Europe. The crustacean expanded its range northward, arriving in the Bay of Fundy, a bay separating the provinces of New Brunswick and Nova Scotia, in the mid-20th century. Then, in the 1980s, a second introduction occurred on Nova Scotia’s Atlantic coast, in a sliver of land that makes up part of Kejimkujik National Park, known locally as Kejimkujik Seaside.

Yet that introduction didn’t register as cause for serious concern until decades later, when researchers conducted surveys of the park’s estuarine beds of eelgrass—a habitat that provides a nursery for a broad range of species. In those surveys, researchers observed that the eelgrass had declined to a tiny fraction of its former coverage and that a large number of opened clamshells littered the estuary’s mudflats. 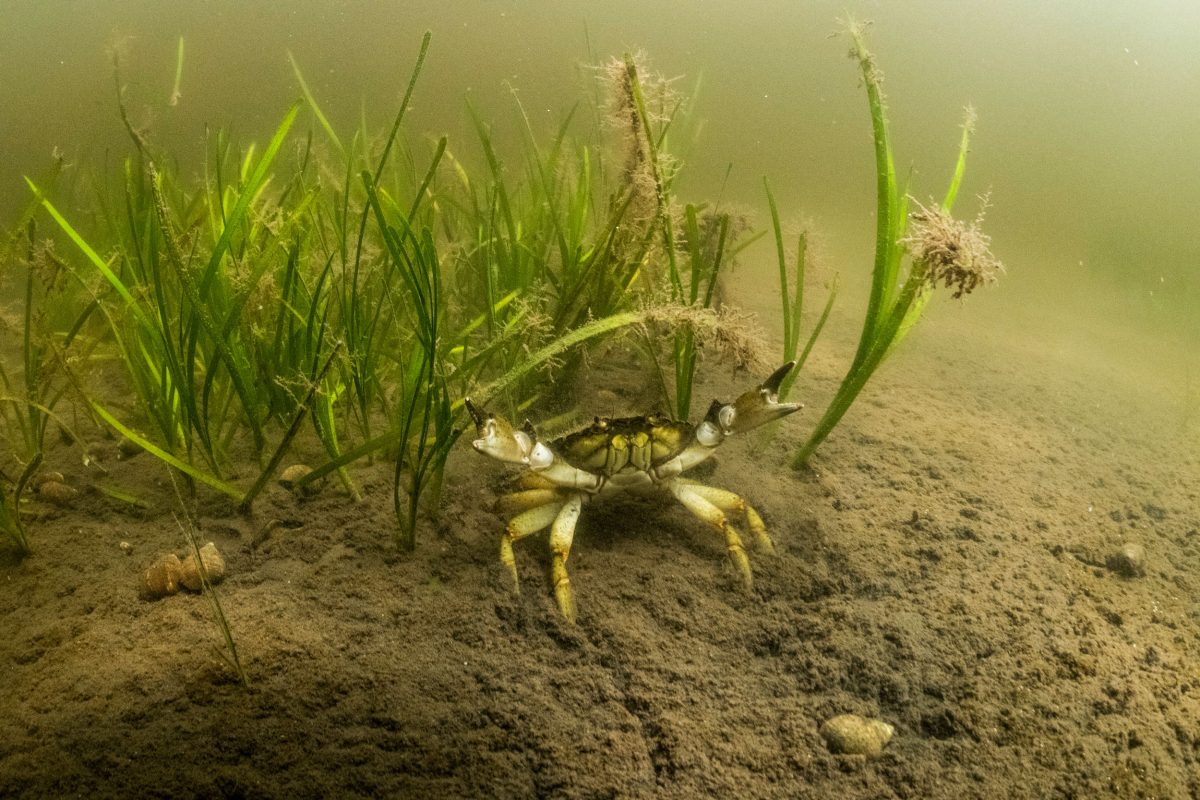 As they dig into the mud and sand for prey such as small clams, green crabs can also damage sensitive eelgrass habitats like the one shown here in Kejimkujik National Park, Nova Scotia. Photo by Nick Hawkins/Minden Pictures

In response, the park invited different ecosystem experts to come take a look, explains Gabrielle Beaulieu, coordinator of the Restoration Resilience Project at Kejimkujik National Park. “And local fishermen were the first to say, ‘Well, have you heard of the green crab?’”

Researchers in the park borrowed a couple of modified shrimp traps—specially designed to catch green crabs by a local fisherman—and dropped one in the estuary; when hauled up, the trap contained 1,100 of the palm-sized crustaceans.

“That was the smoking gun,” says Beaulieu. Proof in hand, the park embarked on a strategy to remove as many green crabs as possible, while monitoring the estuary to assess whether those removal strategies were having a positive impact on both eelgrass meadows and populations of soft-shell clams that burrow in the mudflats elsewhere in the estuary.

By this time, the green crabs in the park were no longer the same as those that had arrived in the 1980s. Instead, populations from two different introductions had hybridized to create a cold-water-tolerant super predator. Beaulieu says that American researchers doing genetic work on the crabs refer to those from Kejimkujik as “the Schwarzenegger of green crabs.” 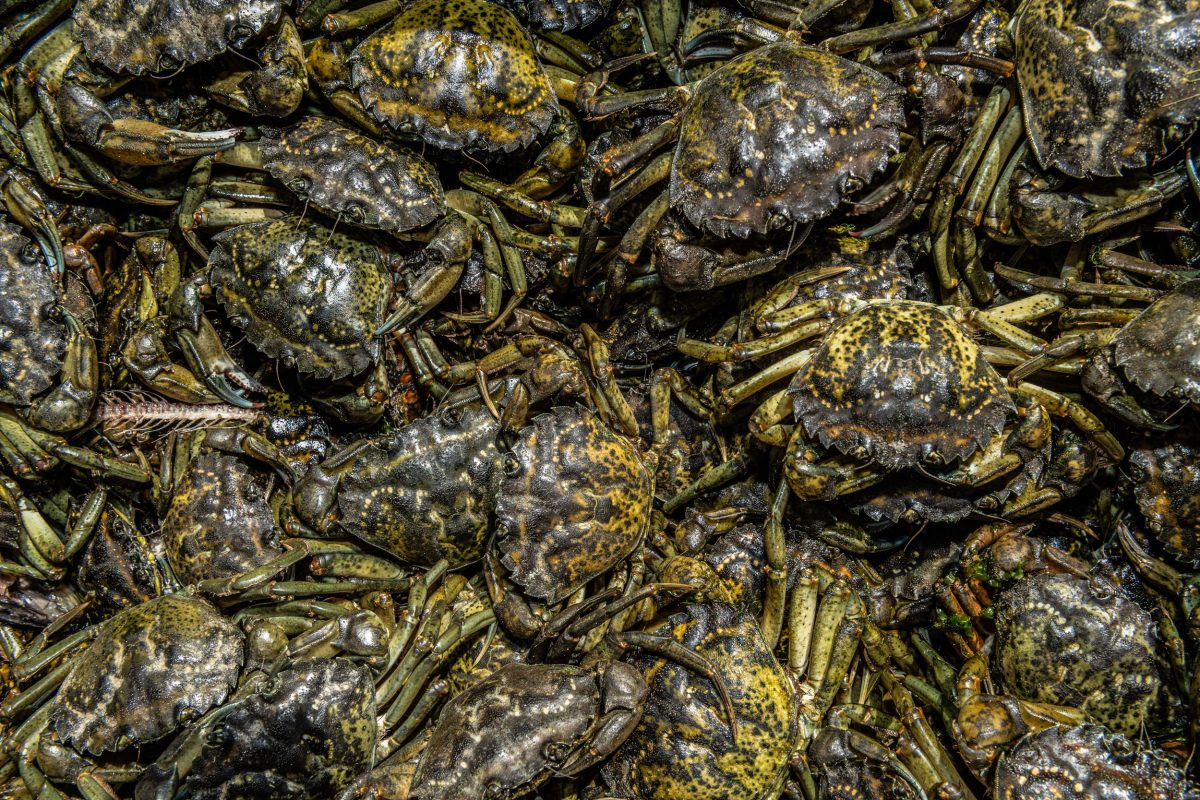 Researchers and fishers use baited traps to capture green crabs. Before the eradication program started in earnest, Parks Canada was hauling up traps with more than 1,000 crabs. Photo courtesy of Parks Canada

That knowledge, combined with the understanding of the extent to which the species had destroyed ecosystems elsewhere, gave an urgency to the park’s efforts. In the years after the discovery of the green crabs, staff began dropping dozens of traps, peaking in 2014, when summer students in rowboats dropped 500 traps a day. That year, surveys showed the population of juvenile soft-shell clams, which had almost entirely disappeared in 2011, had increased by a huge margin. (The juveniles are particularly vulnerable to predation by crabs, due to their snackable size—they’re about the size of a pinkie fingernail.) Beaulieu and the team were amazed by the results, which suggested that large clams were still somehow seeding the estuary. “That meant that … perhaps we were able to control the green crab population enough that those juvenile clams that are just below the surface of the [sediment], are no longer being as heavily impacted,” she explains.

Other metrics, such as the decreasing number of crabs turning up in traps and the increase in eelgrass coverage, also suggested that the strategy was working.

In the project’s early years, the trapped crabs were largely composted. When Beaulieu joined the project in 2014, she began looking for other uses for the crabs. She found that there was an artisanal fishery for green crabs in Italy. And in recent years, researchers and restaurateurs in New England have drawn on the expertise of those fishers to launch a green crab fishery. After talking to some of the people behind the American efforts, Beaulieu grew convinced that a green crab fishery was possible in Nova Scotia.

“Historically across North America, if people start eating something or using something, likely those populations are going to suffer,” she says. In the case of this project, though, the population’s “suffering” was the point.

Within the park’s boundaries, the green crab fishery is educational in nature. Since 2015, Parks Canada has run an ecotourism initiative at Kejimkujik, with staff taking visitors out into the estuary in rowboats to haul traps and remove crabs themselves, while learning about the ecosystem—and the invasive species threatening it—in the process. “What was really interesting is not only that families pay CAN $65 per person to come out for hours with Parks Canada staff to do this, but they would return year after year,” says Beaulieu. Park officials supplemented these excursions with school trips, where students were invited to hunt green crabs in the estuary on foot at low tide, and with public presentations at the dock in the estuary, and in the surrounding communities, on the risks posed by the species.

Because issues with green crabs don’t stop at Kejimkujik’s borders, park officials have also encouraged commercial fishers, who work outside the park, to consider the broader opportunities offered by the green crabs, which range from bait to bioplastics.

“If [the park] is able to make connections between the existing commercial fishers and possible markets, then the incentive to continue fishing green crab year-round is going to be much greater,” says Beaulieu. “And that will have absolutely huge impacts on our coastal ecosystems throughout Atlantic Canada.”

Invasive green crabs were introduced to Kejimkujik National Park, at the part of the park called Kejimkujik Seaside, in the 1980s. Photo courtesy of Parks Canada

One of the fishermen who’s already seen the green crab’s potential as a bait fishery is Jeff Roy. In 2015, Roy swapped his eel license for a green crab one, after realizing his eel traps were coming up full of the crustaceans. That year, the license quickly proved its worth.

For Roy, the part he’s been playing in allowing ecosystems to regenerate is itself a kind of renewal; in 2012, he lost his job of 26 years when the local newsprint mill shut down, and he turned to fishing instead. Now, he has a contact list of more than 200 lobster fishers in his phone, who buy the green crabs he fishes out of two coves close to Kejimkujik’s beaches, with small traps that look like modified toolboxes, to use as lobster bait.

Roy says that lobster fishers were initially skeptical that green crabs would attract lobster, but in the last couple of years, interest has grown through word of mouth. “Once one guy sees a guy coming in with a couple of extra crates of lobster, he tries to figure out what he’s got for bait.”

That could be good news for the lobster industry, which is facing precipitous declines in stocks of favored bait such as herring. But it’s not the only use for which the green crab could be commercially fished.

Back in 2018, Beaulieu was looking through new research and stumbled across an article by Audrey Moores, a professor of chemistry at McGill University in Quebec, about her use of chitin—the compound found in crustacean shells—in creating bioplastics. “And I just, out of the blue, wrote her an email to congratulate her and let her know about green crab.”

For Moores, the news that her research could be applied to invasive species was unexpected—“I didn’t see it coming for 1,000 miles,” she says—but Beaulieu’s enthusiasm was infectious, and Moores, who has devoted her career to a “greener” form of chemistry, was intrigued by the possibility that her research could be used to help save an ecosystem. “I think it was one of the best examples of my career, where we could really make a difference locally.”

That’s meant applying her lab’s discovery—of a less environmentally destructive way to turn the chitin in shells into a kind of chitosan, a biopolymer—to green crab shells. The chitin to chitosan transformation predates Moores’s research, but required corrosive chemicals to yield a polymer that could form plastic. Moores’s lab’s innovation was a process of creating chitosan that did away with those corrosive chemicals and that produced a non-water-soluble form of the polymer, which could be used in everything from plastic biomedical implants to plastic packaging. 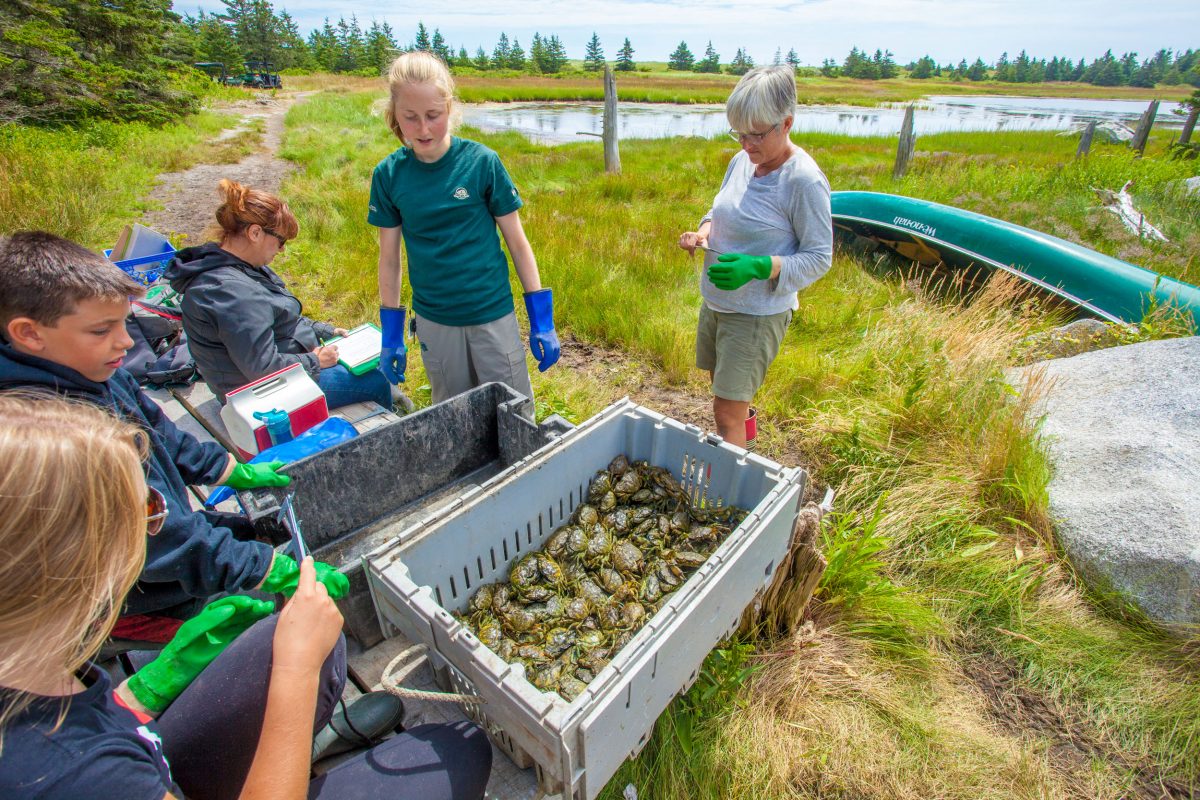 While the lab’s work has to date used lobster, shrimp, and insects, there’s reason to think that green crab shells will yield chitosan as well, Moores says. “Because we’ve tried now five different species of crustaceans and insects, and we have very good results for each of them, we’re fairly confident that green crab should not be a problem.”

This year, a postdoctoral researcher in Moores’s lab has started to investigate the application of this method on green crabs caught in Kejimkujik and shipped frozen to Montreal, Quebec. The next step will be scaling up that process to assess whether and how they can produce larger quantities of chitosan from green crab shells.

A separate research partnership between Parks Canada and Dalhousie University in Nova Scotia is investigating the possibility of using green crabs to produce a concentrated liquid fertilizer for houseplants and gardens. A food fishery may eventually make up part of the picture, too; Beaulieu has connected with an association of Nova Scotia restaurants to promote green crabs to restaurants as a local, artisanal menu item.

With this research in hand, officials hope to make the case for fishing green crabs to a broader swath of the fishing industry; Parks Canada contributed funding to have the postdoctoral researcher in Moores’s lab develop a draft business plan for Nova Scotia fishers and processors, laying out these potential commercial uses of green crabs, to be delivered as soon as the spring.

Taken together, Beaulieu says these measures are not intended to eradicate green crabs from the ecosystems they’ve invaded; in talking with Mi’kmaw partners in the park, Beaulieu says park officials have come to appreciate such a strategy is not practical. Instead, the aim is to keep green crab populations at a level that allows other species to thrive.

“Our thinking is, we’re allowing the ecosystem to adapt,” says Beaulieu. “Evolution is there, the native species will figure out ways to deal with this new predator. They just need enough time to get those strategies and those behaviors in place.”

In other words, tackling the green crab, an invasive species with many titles, means having humans don as many hats: as fishers, researchers, and consumers.