The sand bubbler crab is just one of many industrious seashore architects whose actions help shape the coast. Photo by Jurgen Freud/Minden Pictures

Ah, the coastal vista! While it’s logical to assume that water, wind, and even tectonic forces construct a shoreline’s beautiful and complex features, there are also animals behind some of that building. Here are five invertebrate architects whose works adorn the coast.

Romans used rock and lime, and modern homebuilders use bricks and mortar, but whatever the material, most societies devised their hardiest walls from stones cemented together. There are masons beneath the waves, too. The sandcastle worm (Phragmatopoma californica), one of California’s premiere invertebrate architects, lives inside a rigid tube made of sand grains and shell fragments that it binds together using its own gluey mucus. At low tide, the worm retreats into its tube and seals it shut; at high tide, its tentacles emerge to sift the water for food. Many marine worms build tubes of sand and shell, but the sandcastle worm is one of the few that live in colonies. Together, the worms’ tubes form reefs several meters across. These living reefs are so durable that the worm’s glue is being studied for industrial applications. 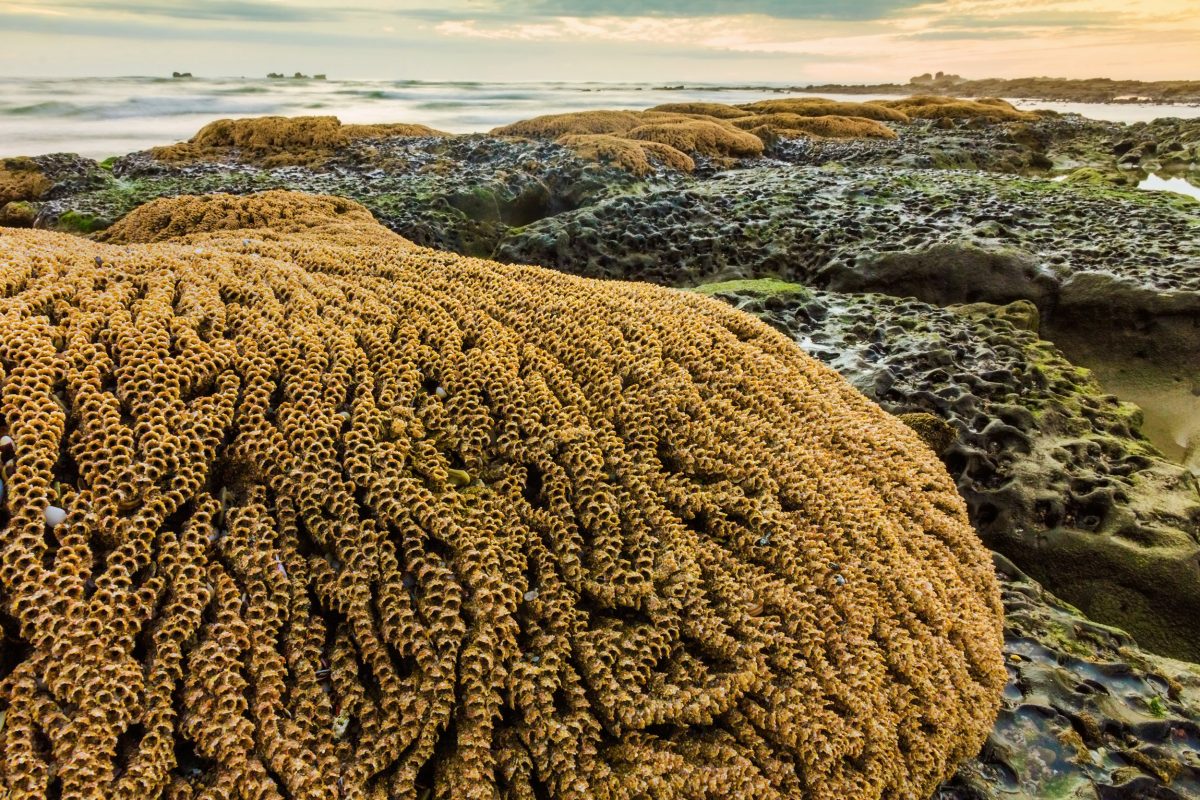 The reefs of the sandcastle tubeworm can grow to several meters across, creating textured habitat in the intertidal zone. Photo by robertharding/Alamy Stock Photo

Human societies built some of their most fascinating structures to house them after death—the pyramids of Egypt, Ireland’s Newgrange tomb, and the Paris catacombs. One family of architecturally minded bivalves, the piddocks, may not be as fixated on death as ancient pharaohs, but they nonetheless spend their lives digging their own graves. And they’re not simply digging into soft sand—some species, such as the angelwing, can bore through rock. The larva settles on a boulder or bedrock and starts grinding using rows of tiny teeth on the outside of its newly formed shell. Its muscles contract both vertically and horizontally so the animal twists downward like a drill bit. The piddock remains locked in its rock burrow for life, extending its tube-like siphons to feed and excrete through the opening. Eventually it dies entombed in stone and leaves the burrow behind, creating shelter for other species without the ability to drill. 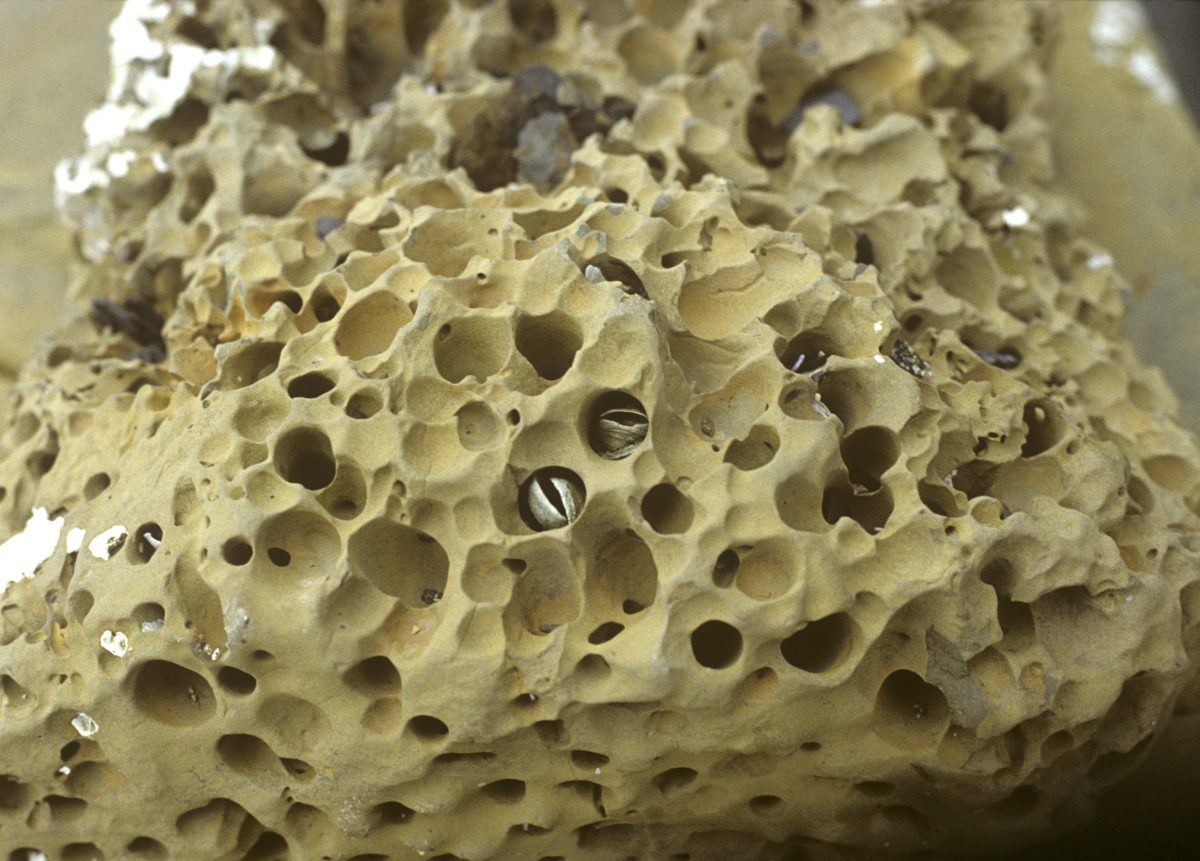 Angelwing piddocks twist their shells like drills to dig a burrow. When they congregate, the pitted rock can start to resemble a foam sponge. Photo by Nature Photographers Ltd/Alamy Stock Photo

In the ocean as on land, construction projects mean lots of excavating, and purple sea urchins are among the intertidal zone’s most prolific diggers. These spiky little balls use their teeth to rasp the rock beneath them, so they create, eat, and then poop out sand as they dig small pits. Across their range from Alaska to northern Mexico, purple sea urchins produce about 100 tonnes of sand per hectare per year. That’s on par with what a moderate-size river would spit into the sea, and enough to impact the amount of sediment on nearby shorelines. On the west coast of North America, where sea otters—prolific urchin predators—are returning after near extinction, fewer urchins might mean changes in how much sand is created along the coast, too. 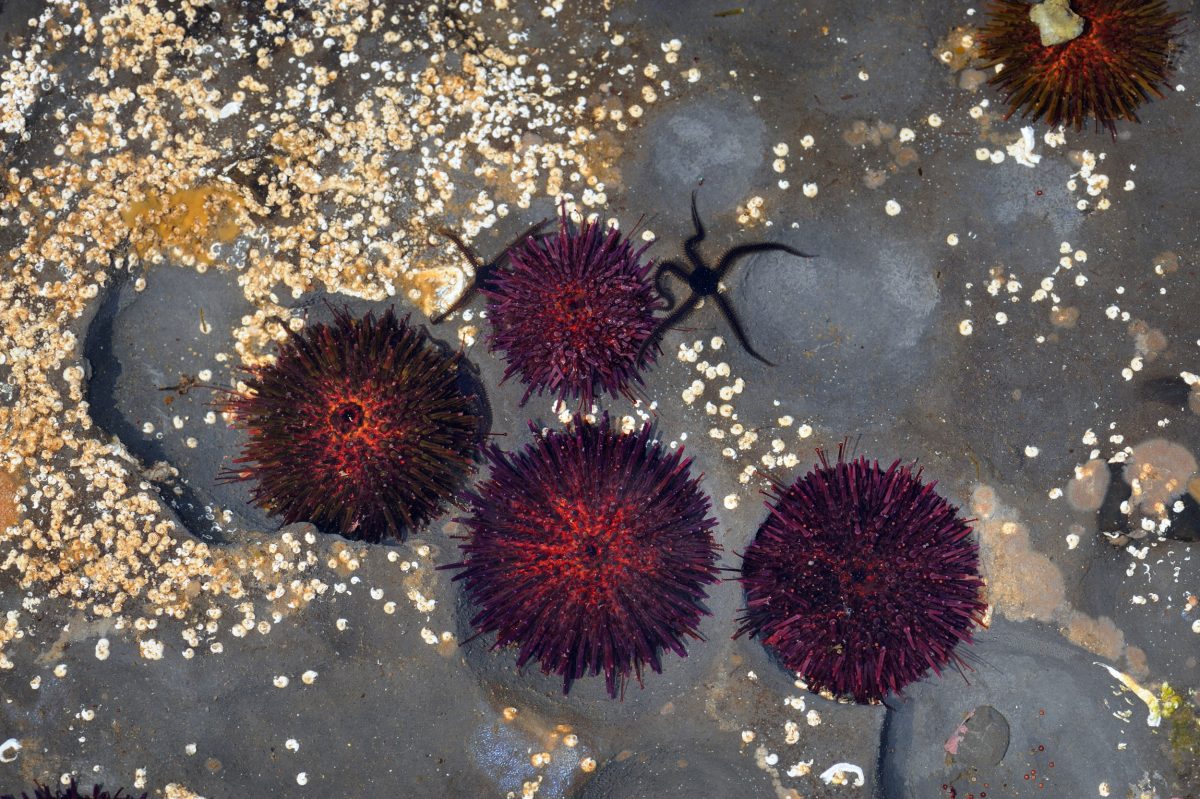 Individually, sea urchins have a small footprint in the intertidal zone, but together they chew millions of tonnes of sediment off coastal rocks each year. Photo by Robert Thompson/Minden Pictures

A city’s skyline and its myriad windows gives little indication of the life that pulses behind those panes of glass. One marine sponge builds its own “apartments” on reefs and limestone rocks that, like modern high-rise windows, offers outsiders only a glimpse inside. The boring (as in drilling, not dull) sponge secretes an acid that dissolves hundreds of tiny interconnected tunnels into calcium carbonate rocks and shells. Once it has moved in, the brilliant orange or yellow sponge is only visible in these little apertures through which it gathers food. But behind those openings, the larger mass of the sponge fills the intricate tangle of hollowed out chambers and passages. 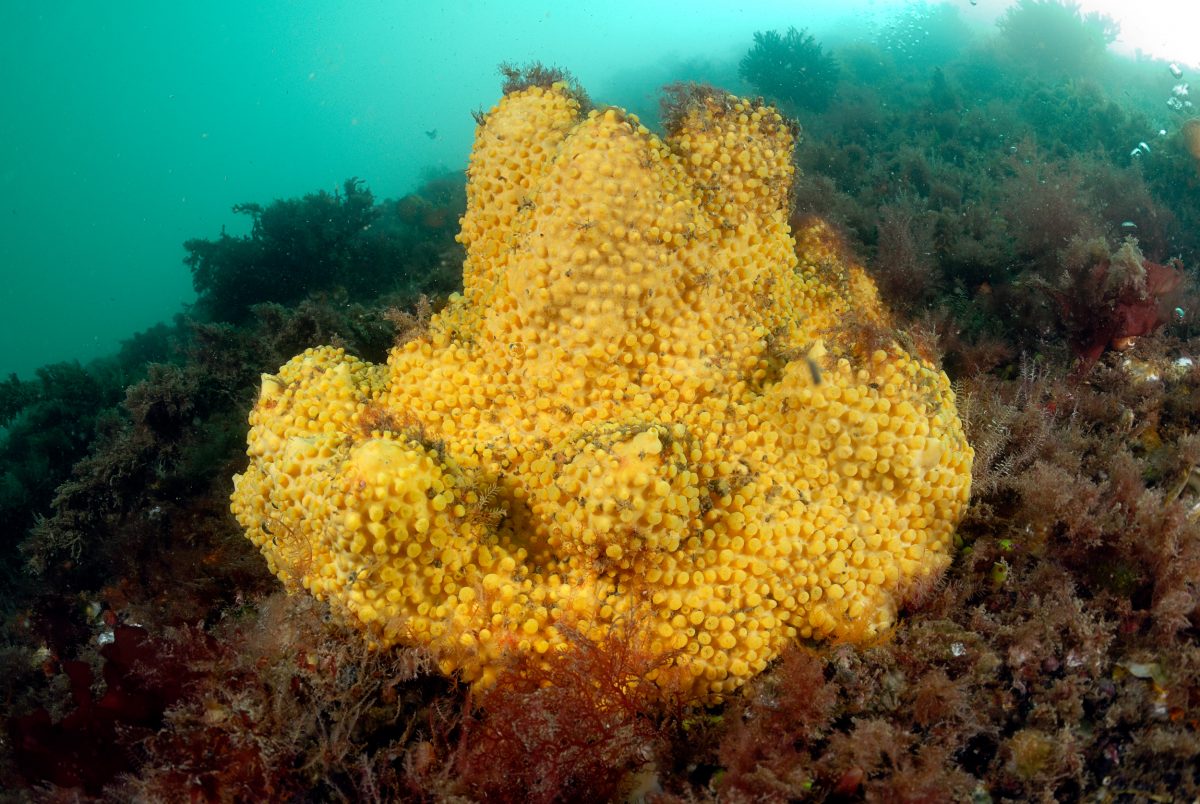 The yellow filaments of the boring sponge peep out an array of little holes in the rock, which the sponge has hollowed out for a home. Photo by Ron Offermans/Minden Pictures

“Firmitas, utilitas, venustras.” The Roman writer and engineer Vitruvius wrote that good architecture requires three qualities: strength, utility, and beauty. These remain the qualities of great, long-lasting buildings, but some structures are more ephemeral—here today, gone tomorrow. On the coasts of Australia, Southeast Asia, and Africa, the masters of the transient structure are sand bubbler crabs. Every day as the tide goes out, crabs leave their burrows and start shoveling sand into their mouths. They suck off food particles, gather the sand into little balls, drop them, and move on, leaving trails of beautiful lines and whorls. The returning tide dissolves the balls while it re-coats the sand grains with food, so the crabs can start again next low tide. It may not have the firmitas or utilitas of the Parthenon, but surely even Vitruvius would admire these industrious crabs that redecorate an entire beach every single day. The venustras is clear. 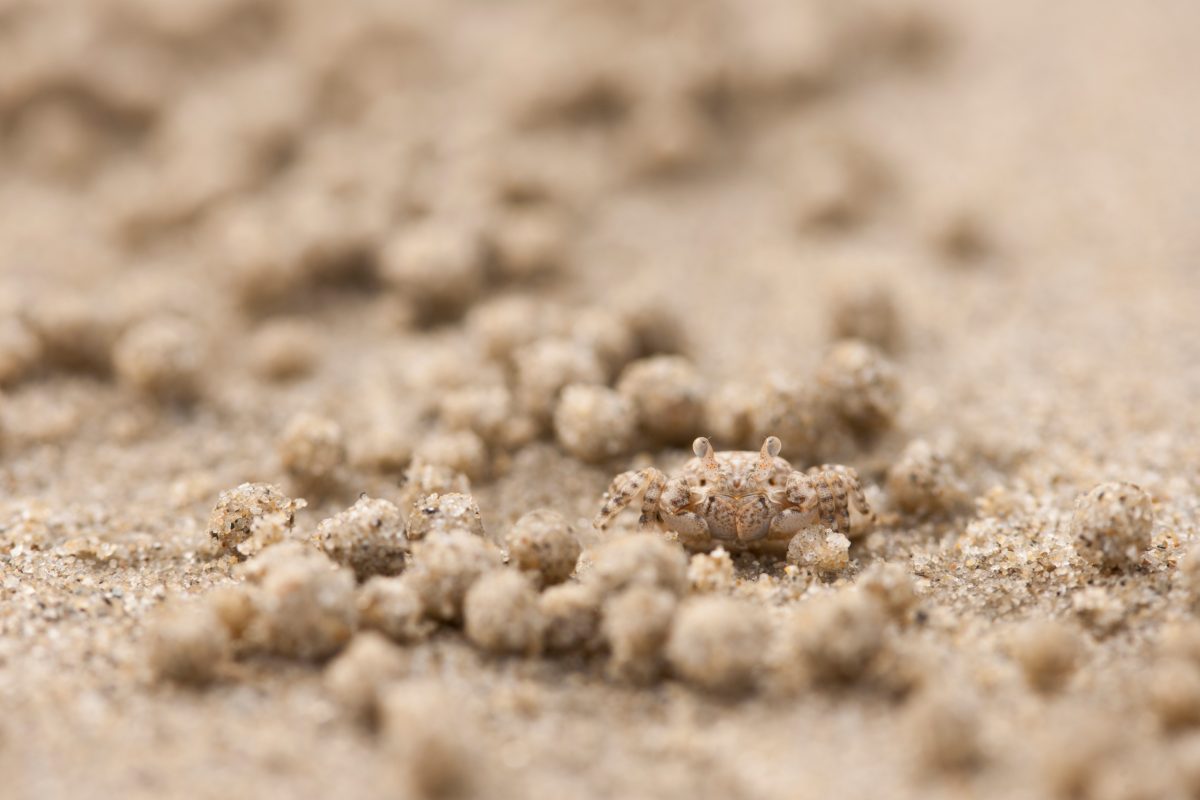