This elaborate samurai helmet with a removable octopus crest would have been a formidable sight on the battlefield. Photo courtesy of the Stibbert Museum, Florence, Italy

Heavy morning fog blanketed the valley, obscuring the two armies massed near the Japanese village of Sekigahara. The year was 1600, and control of the country was at stake. When the fog suddenly lifted at about 8:00 a.m., swords flashed, guns roared, and one of the greatest battles in Japanese history was underway.

By mid-afternoon, thousands lay dead. As the victorious commander prepared to view his dead enemies’ heads, he reportedly said, “After victory, tighten the cords of your helmet.” The kabuto (helmet) was an integral part of a Japanese warrior’s armor.

This elaborate samurai helmet with its tentacled topper was made at the end of the 16th century. Japanese armor dates back to about the fourth century, says Barry Till, curator emeritus of Asian art at the Art Gallery of Greater Victoria in British Columbia. Over the centuries, the armor evolved in complexity and materials—especially after the introduction of firearms in 1543 necessitated more robust protection. A complete suit of armor might have consisted of about 20 different parts, including the helmet, face guard, chest protector, and shin guards.

This kabuto is one of 200 displayed in the Japanese armory section of the Stibbert Museum in Florence, Italy. The bowl of the helmet is made of 28 steel plates, while the neck guard is made of five steel plates covered with lacquered leather and joined with silk threads. Riccardo Franci, curator of the Stibbert Museum armory, explains that the edges of the bowl’s plates are covered by gilded bronze, and the brim and two wings are edged with engraved shakudo, an alloy of copper, gold, and silver. 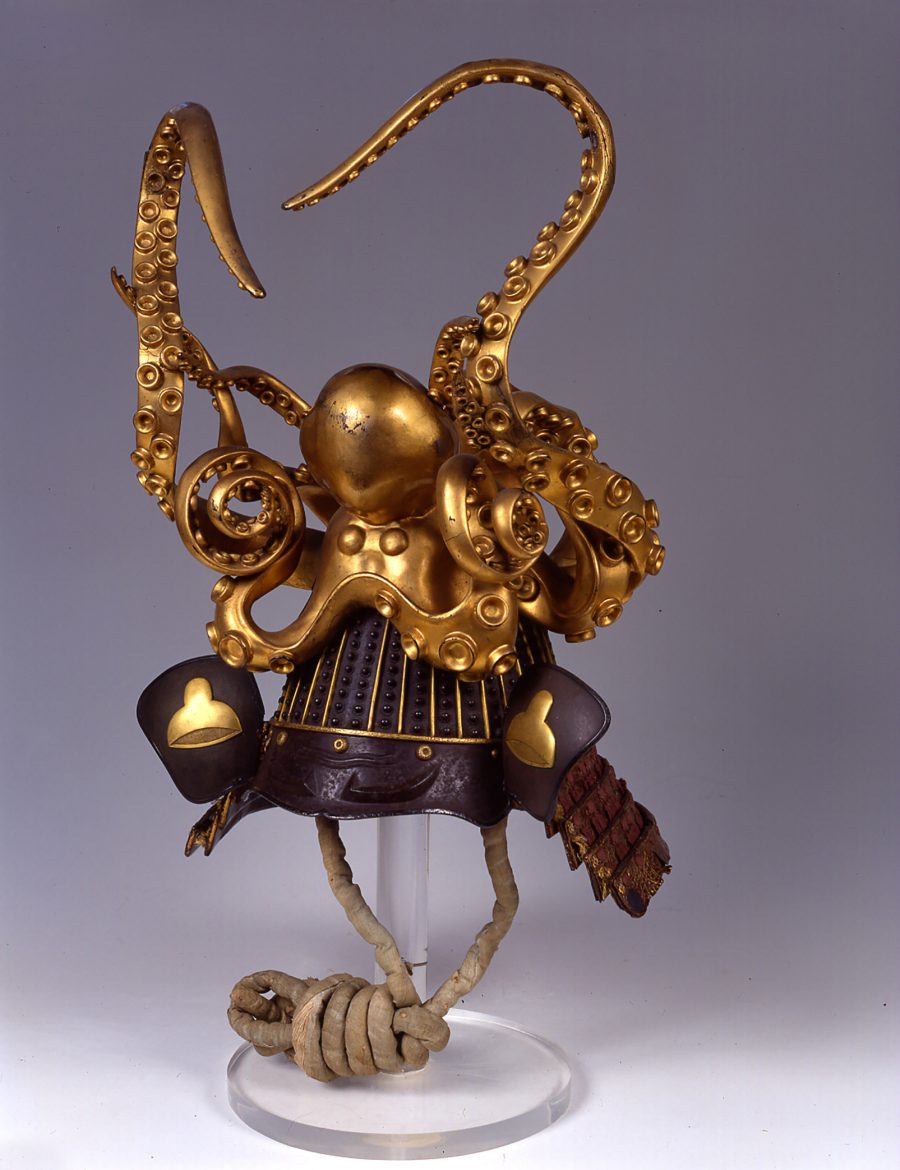 The quality of materials—including imported leather and precious metals—beautiful workmanship, and decorative elements all point to the helmet belonging to a high-ranking samurai. Helmets were sometimes adorned with elaborate features, including horns, crab claws, or rabbit ears. While this particular example is perhaps more fantastical than fearsome, some helmets, especially those with face masks, could be quite terrifying. The perfect costume for a villain perhaps. In fact, says Till, the samurai helmets with face masks gave filmmaker George Lucas the idea for Darth Vader.

Armor was also a way for a samurai to display his personality and status. The decorations, explains Till, were there for a little bit of intimidation but more for showing off. The samurai wanted to look cultured, he says, and hired special artisans to create these pieces. The samurai was trying to say, “I’m sophisticated, I can afford to have these nice little artworks on my head,” Till adds.

The work of art on this helmet is the gilded octopus, which is made of iron overlaid with papier mâché. Franci explains that the octopus is a popular motif in Japanese culture, the result of a deep connection to the sea and the creatures living in it. The Stibbert Museum collection also includes a Japanese sword guard and sword fittings adorned with octopuses.

Franci says warriors likely chose the octopus as a crest “because it represents vitality, but also because it was a common nightmare of every seaman to be drawn in[to] a deadly hug of this powerful creature.” He adds that because some octopuses can heal their cut tentacles, the Japanese probably believed that their effigies would protect against injury.

While it’s possible the ostentatious octopus crest indicates the helmet was created for show or ceremonial use, Franci points out that the octopus can be removed easily and the helmet is so solid and well-made that in battle it would have provided the best protection available at the time. There are various theories about why such elaborate helmets developed—including the need for foot soldiers to be able to see their commanders amid the chaos of the battlefield.

Fierce, sword-wielding samurai might seem far removed from a high-tech modern Japan, but the kabuto is not forgotten. Every May 5, the Japanese celebrate Children’s Day, flying colorful, carp-shaped windsocks and displaying samurai armor, including kabuto, and samurai dolls in their homes to invoke good health and good fortune for their children. As for this particular samurai helmet, Franci says that in the past it was lent to exhibitions around the world, but as it’s now very fragile its days of travel are over. The helmet will remain at the Stibbert Museum, a tangible display of the identity of a long-dead samurai.