The Tlingit potato is enjoying a revival in southeast Alaska, where generations of Indigenous people have tended it for at least 200 years. Photo by Ari Snider/KCAW

On a crisp October afternoon, as bright cottonwood leaves flutter to the ground, I gather with a group of people to talk potatoes. In typical pandemic style though, we’re not outdoors, nor are we together in person; instead, we’re online, with each person occupying a little box on my computer screen. While this may sound a little dull for online entertainment, the enthusiasm over harvesting spuds from a community garden is contagious.

Michelle Putz of the US Forest Service in Sitka, Alaska, leads the call, smiling broadly under her sandy blond bangs. Though an in-person meetup would be nice, she says, the online format has brought together a far-flung audience of several dozen people. We span nearly the length of the Pacific Northwest coast, from my home 1,000 kilometers northwest of Sitka, near Prince William Sound, to 1,400 kilometers southeast of Sitka, in Washington State.

We are drawn together by the Tlingit potato, a tasty and genetically distinct fingerling that Indigenous people have grown along this coast for at least two centuries. Its journey here, whether by European explorers or along much older Indigenous trade routes, is a matter of debate. But its current revival is clear. After fading from widespread use in the 20th century, these and other potatoes that have carefully been tended by Indigenous peoples are reappearing on dinner plates along the coast.

This is welcome news to David Kanosh. For the past two years, the Tlingit storyteller and member of the Sitka Tribe of Alaska has provided a traditional land acknowledgment at the community garden, which abuts the Forest Service office.

“Growing this potato shows the Tlingit culture is still here among us,” he later tells me by phone. “We are not forgetting.” 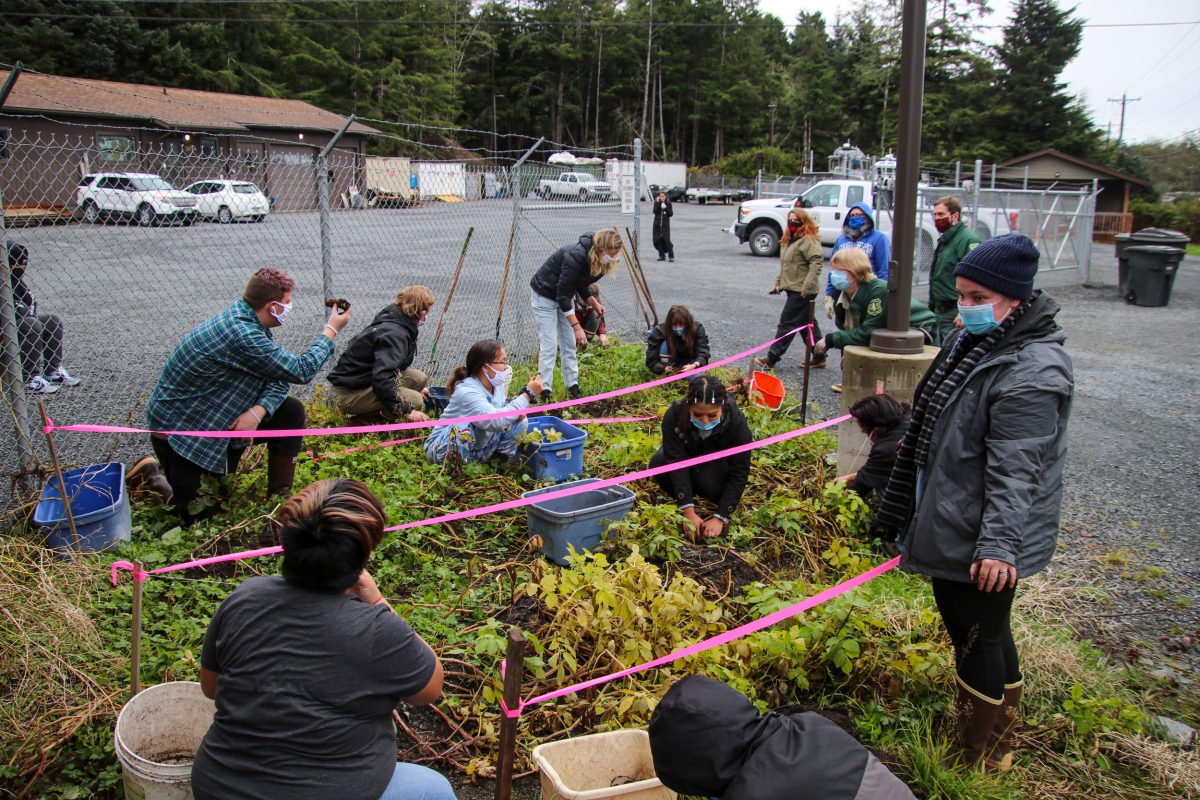 Like the Yukon Golds favored by many North Americans, Tlingit potatoes sport yellowish skins. But the similarities end there. The Tlingits have slender, knobby bodies that are often pocked with deep eyes. Slice one lengthwise and its uneven shape may resemble the indented shorelines of southeast Alaska’s rugged islands. A large Tlingit can rival a banana in length, but the potato often runs smaller. Naturalist John Muir, who stopped by several Tlingit villages during an 1879 canoe expedition, reported some the size of walnuts.

Though the potatoes aren’t well-suited for French frying, they’re perfect in soups, where their creamy texture and somewhat buttery flavor complement salmon. For Kanosh, they’re ideal as a baked or broiled stand-alone dish.

Worldwide, potatoes are eaten by more than a billion people and are among our most important food crops. They originated in the South American Andes, where the Inca first cultivated them 8,000 years ago. In the 16th century, Spanish explorers brought them to Europe, and over the next several centuries, farmers planted the adaptable tuber across the continent. As they selected out desired traits and introduced the potatoes to new climates, they developed hundreds of varieties that then spread across the globe, including back to the Americas.

“These potatoes are really different,” says Putz, explaining that genetic testing shows that they are unrelated to European cultivars.

Instead, they are kin to varieties originating in Mexico or Chile, suggesting to some researchers that they arrived from Spanish colonies in California and Mexico or by way of European explorers traveling northward from South America. Historical research indicates that Spanish settlers planted potatoes in 1792 at a fort near Neah Bay in northwestern Washington, close to a Makah village that presumably adopted them after the fort was abandoned.

But Putz says the potatoes may have arrived via Indigenous trade routes that predated colonists. Tlingit oral histories support this idea, says Kanosh, as they indicate that the potatoes could have arrived thousands of years earlier, when people migrated northward along the coast to settle lands newly free of ice.

Hundreds of kilometers south of Sitka, on the islands of Haida Gwaii in British Columbia, the Haida potato, one of two potatoes that share similarities with the Tlingit, was once integral to Indigenous harvests, explains Marlene Liddle, a Haida cedar bark artist and teacher who shares her knowledge of traditional foods with kids.

Each spring, she says, people planted potatoes along south-facing beaches as they left winter villages to harvest seaweed, cedar bark, and summer’s first salmon. Potatoes were often planted right above the high tide, where kelp and fish bones provided rich fertilizer. Some tending occurred, but the potatoes were largely left to flourish in the narrow margin between ocean and rainforest. They were harvested during the late summer return to winter villages, carried aboard canoes in bentwood cedar boxes, and later stored in root cellars. 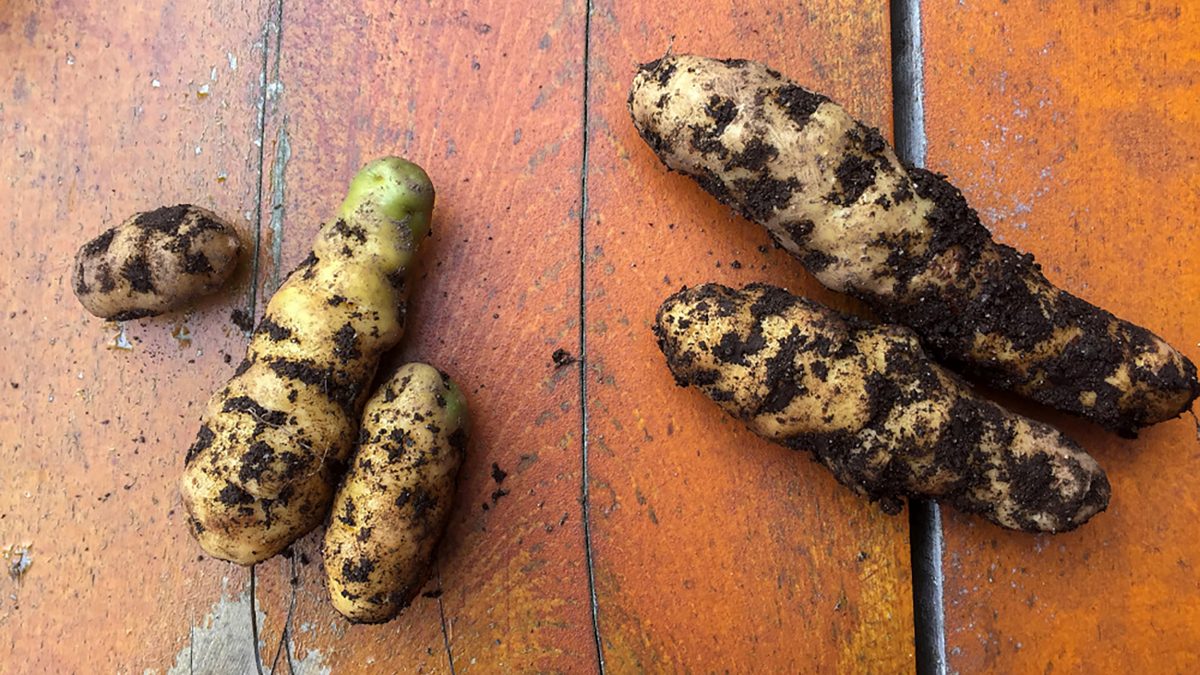 While these knobby, cigar-shaped potatoes might look ideal for French fries, they’re better suited for baking or broiling. Photo by Ari Snider/KCAW

“By not being around their parents or elders, there were generations that never learned to garden or even recognize traditional plants and fish,” she says.

Following the 1907 designation of the Tongass National Forest in Alaska, rangers displaced Tlingit, Haida, and Tsimshian “trespassers” from traditional lands to make way for fox farmers, miners, and others holding new federal permits. As rangers torched salmon smokehouses and other Indigenous property, they prevented traditional harvests and severed food security along a coast rich in seasonal abundance.

Potato gardens were not spared. In 1921, a family from the Tlingit village of Hoonah was chased from their traditional potato patch by a rifle-toting fox farmer. The outrage that followed helped galvanize an Indigenous rights movement that eventually led to the 1971 settlement of Indigenous land claims across Alaska.

Now, in a sunny patch alongside the Forest Service office, Tlingit potatoes grow under the auspices of Putz and the Sitka Tribe. They’re descended from potatoes grown for over a century by Maria Ackerman Miller’s family. Like her Tlingit ancestors, Miller diligently selected and stored seed potatoes each fall to sprout her crop in the spring and to give away to friends for their own gardens. In this way, she helped rekindle fondness for the potato. The same practice continues today in Sitka as it has since the community garden partnership began four years ago. By sharing each year’s yield of potatoes, Kanosh says the garden builds on a tradition of food security that has helped Tlingit people overcome past pandemics and shortages.

When I seek out seed potatoes for my own garden, I learn that both Tlingits and Haidas are newly available through Alaska’s agriculture division. I order some to keep cool and dry until spring, when I’ll bury them in soil enriched with seaweed and fish bones. With sun, water, and a little luck, they should produce clones of the originals, reminding me of a cultural resilience described by Kanosh.

“When we eat a Tlingit potato,” he says, “we share a meal with those who have gone before us, those with us today, and those who will come after us. It’s rather transcendent.”