The people who lined up outside New York City’s Concert Hall in the summer of 1842 had been promised a marvel—a genuine South Sea mermaid. Advertisements showed three long-haired, fishtailed beauties sprawled enticingly on a wave-splashed rock. 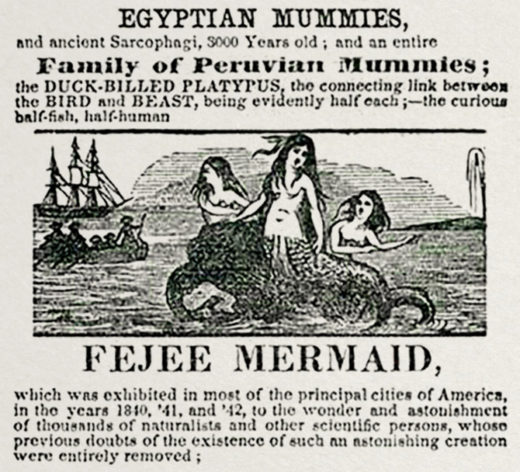 Showman P. T. Barnum had no qualms about false advertising when trying to lure New Yorkers to his Fejee Mermaid exhibit.

Inside, spectators found something entirely different: one preserved mermaid, shriveled and grotesque, with wisps of hair sprouting from her bony head. Her lips were drawn back from a gaping mouth full of sharp teeth, and her stick-thin arms and hands folded up toward a face that seemed frozen in horror. Below her skeletal mid-torso, her body was fish like, with scales and multiple fins. The mermaid posed upright on her curved tail, reaching to about knee height.

She was billed as the Fejee Mermaid, and the exhibit was a bit of profitable flimflam by American showman and museum entrepreneur P. T. Barnum. In the mid-1800s, Fiji (or Fejee) was popularly viewed by Westerners as a place of titillating savagery, cannibals, headhunters, and—according to Barnum—goblin-like mermaids. Prior to the exhibit, he had planted newspaper reports of mermaid sightings to build buzz. The showman even produced a spurious expert from the equally spurious British Lyceum of Natural History to testify that she was the real deal. 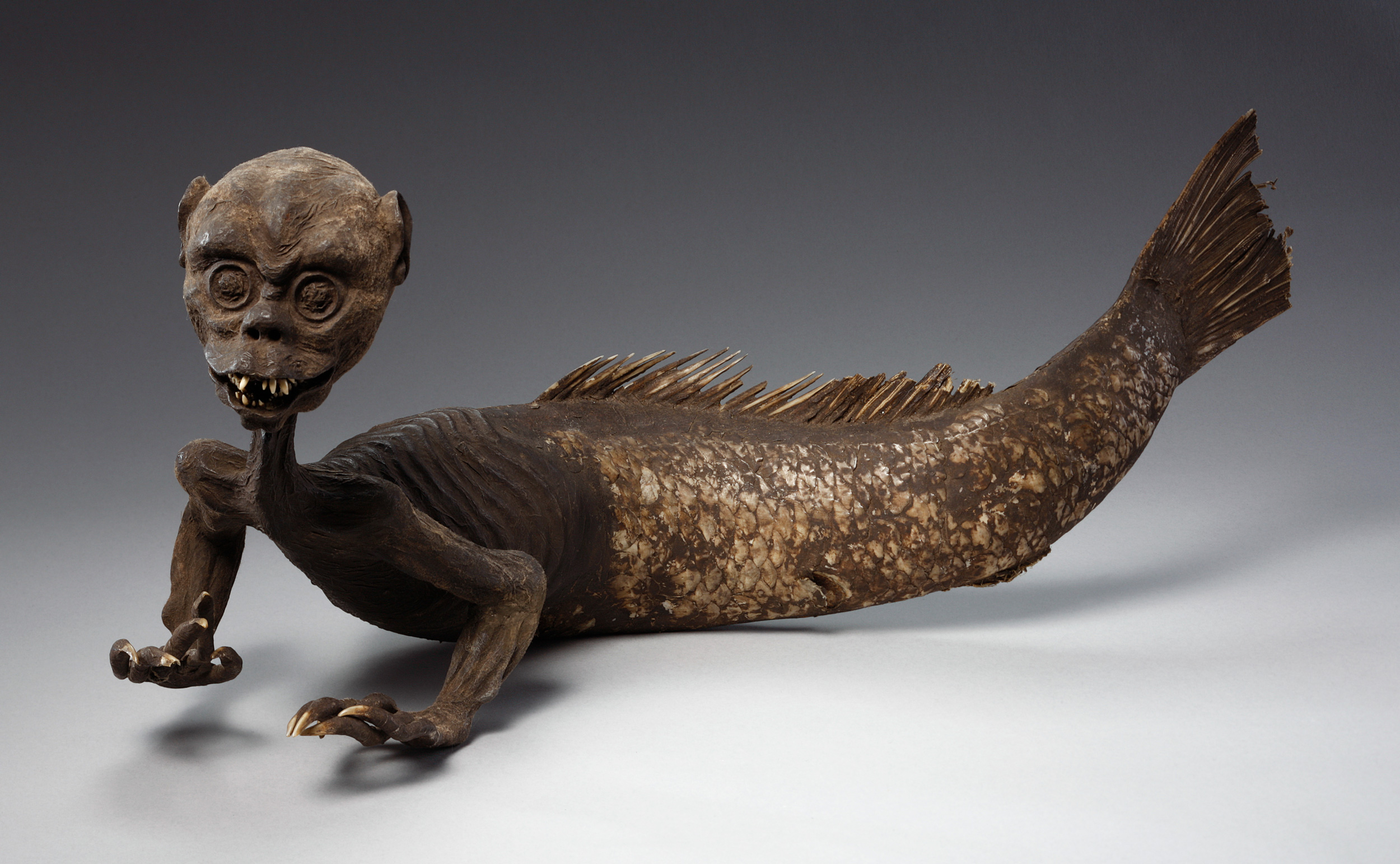 The original Japanese mermaid figures, including the Fejee Mermaid, had their hands raised toward their face and an expression of terror. After trade opened between Japan and the wider world, the figures were more often oriented in a crawling position, which is the case for this merman at the Horniman Museum in London, England. Photo courtesy of the Horniman Museum and Gardens, NH.82.5.223

The Fejee Mermaid was almost certainly a Japanese hoax animal called a ningyo or “fish person”—constructed decades earlier for display among other curios at a misemono, a combination fair and sideshow popular in Japan from the 17th to 19th century. She was likely purchased by a sailor or trader from the Netherlands in the early 1800s, when the Dutch were the only Westerners allowed access to the country. By 1822, she was on display in London for a shilling a view. Business dropped off when a surgeon declared her no more than clever taxidermy, the body of a fish melded to the head and torso of an orangutan. The American audience either didn’t know or didn’t care about the surgeon’s verdict, and the mermaid remained on display at Barnum’s American Museum, likely until the place burned down in the 1860s.

Whether the deception regarding the authenticity of the Fejee Mermaid and others like her originated with the Japanese craftspeople flogging their fabrications or with the foreigners is unclear, though seafarers already had a long tradition of misinterpreting—or straight up lying about—the strange creatures they encountered. Sailors transmogrified oarfish into sea serpents, squids into krakens, whales into leviathans. Mermaid “sightings” were likely glimpses of manatees or dugongs. Seafarers saw them alternately as half-human beauties or foreboding monsters (perhaps revealing two dominant forces of the seafarer psyche: desire and fear). In 1493, Christopher Columbus may have been dismayed to report that the three mermaids he saw off Haiti had manly faces.

The Fejee Mermaid and her kin were the ugliest of the bunch. Still, Japanese mermaids were considered magical. In one famous story, a young girl unknowingly ate mermaid flesh and lived for at least 800 years. Merfolk—objects of duality themselves, both familiar and foreign—were, as Japanese folklore expert Michael Dylan Foster from the University of California, Davis, explains, often considered unlucky or lucky or both, a prophecy of the future and, at the same time, a charm against it. 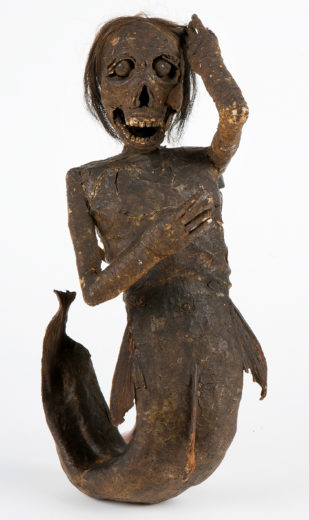 Japanese mermaids were often known as monkey fish. Investigation into the mermaid at the Buxton Museum in Buxton, England, revealed its true makeup—no monkey, just a fish and a lot of craft supplies. The position of her hands suggests she was once holding a comb and a mirror. Photo courtesy of Buxton Museum and Art Gallery, Derbyshire County Council

The taxidermic mermaids may have originally been constructed as talismans or were simply a way for fishermen to entertain themselves and make extra money. Either way, Japanese mermaids and mermen became popular with Westerners in the 19th century, when amassing huge collections of anything from human bones to exotic oddities was all the rage. After Japan opened its doors to the world in 1853, many merfolk were doubtless constructed purely for sale to wealthy foreign collectors, who typically had no knowledge of or interest in the mythology and traditions behind them.

Today, the collectors’ merfolk, often called monkey fish, reside in museums. London’s Horniman Museum has a merman, and the Buxton Museum in northern England has a mermaid, both acquired by voracious collector Sir Henry Wellcome. In 2010, Paolo Viscardi, then a natural history curator at the Horniman, took a closer look at the merman. The first surprise: there was no monkey in the monkey fish. The figure’s double row of teeth had come from a fish, and X-rays and CT scans showed that the head, torso, and arms were entirely artificial. They had been built around a frame of wood and wire, shaped and bulked out with clay, string, and cloth, and finished with a layer of papier mâché. The tail section was wood, clay, and cloth covered with real fish skin, probably from a carp.

Viscardi and Buxton-based curator Anita Hollinshead then turned their attention to the mermaid. It too was built around a frame of wood and wire, bulked out with cloth, and finished with papier mâché. Its tail was covered in preserved fish skin. The teeth were carved bone, the eyes possibly made from shells, the hair was human, and each finger had a tiny, carefully carved fingernail.

The curators haven’t been able to track the figures back to their exact origins yet. Viscardi says the Horniman merman fits the style of figures produced after Japan opened its doors to the West and may date to the early 1860s. The Buxton mermaid is less gargoyle-like than most Japanese mermaids. Hollinshead determined that she had come from Sierra Leone in the late 19th century, and says it’s possible she represents Mami Wata, an African water spirit. Or Africa might have been merely a station on the mermaid’s long journey from Japan.

Mermaids remain popular in Japan, but Western culture’s modern ideals gradually filtered in over time and pulled their pointed teeth; the mermaids portrayed today in manga and anime, while still creatures of duality, are more Disney’s Little Mermaid than Barnum’s freaky Fejee Mermaid.