When whales die, they usually come to rest on the seabed. But sometimes, due to illnesses, whaling, or even toxic algae, whales die on dry land. From 20th-century whaling stations to prehistoric mass-stranding sites, here are five onshore sites where whales met their end.

Between 2010 and 2012, crews working on the widening of the Pan-American Highway in Chile’s Atacama Desert came across fossilized whale bones jutting up from the soil and rocks. American and Chilean researchers began studying the site—named Cerro Ballena (whale hill)—and found that 40 baleen whales, sperm whales, seals, aquatic sloths, and other creatures had died there millions of years ago in four separate mass-stranding events. Analysis of the remains revealed that the animals had died suddenly during a catastrophic event, most likely a large and harmful algae bloom (HAB). HABs are often the suspected culprit behind modern mass strandings—including that of 337 sei whales in Southern Chile last year—highlighting how devastating these toxic events are to marine life. 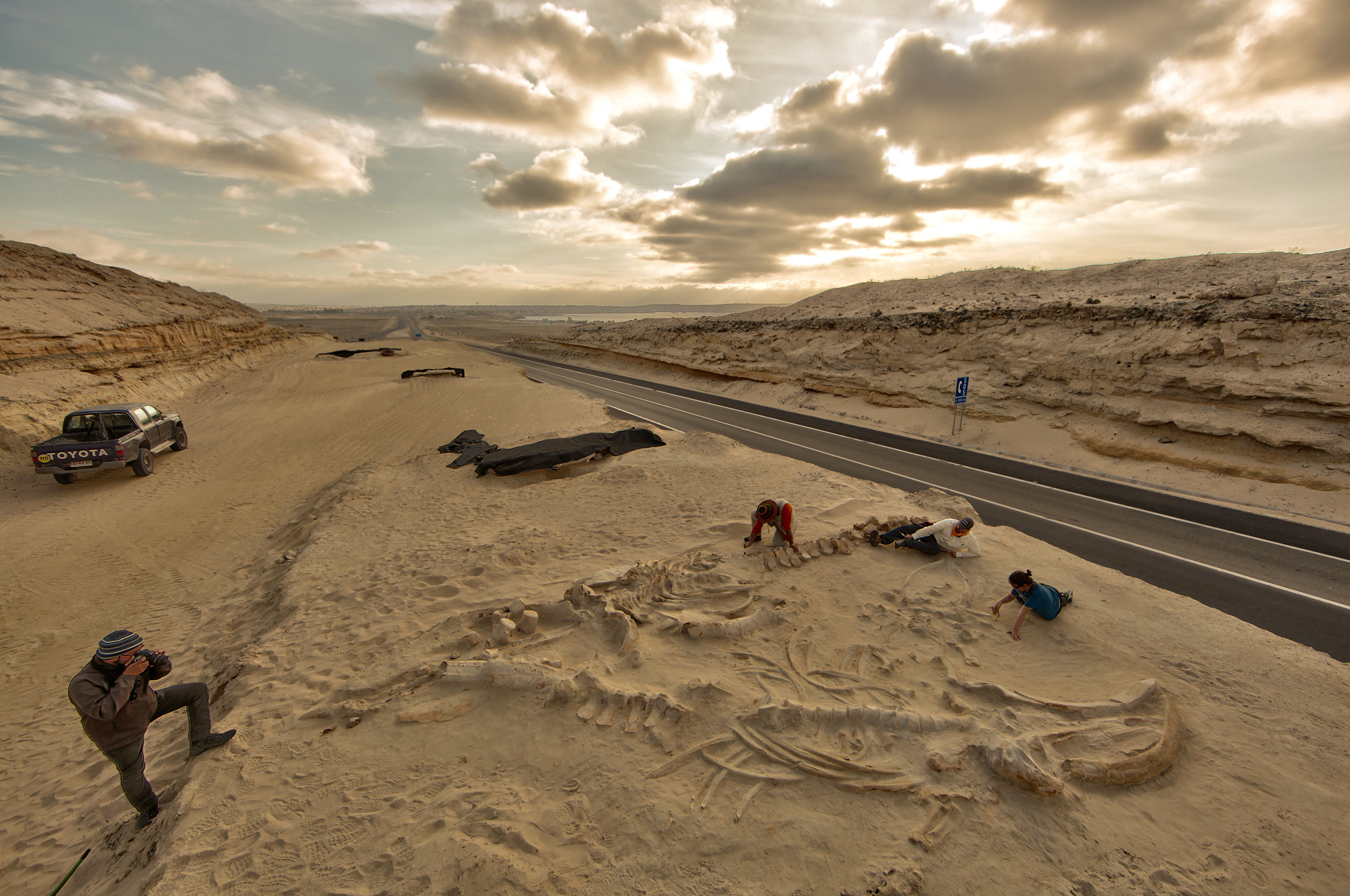 Scientists studying the site in the Atacama Region of Chile where fossilized whale bones were discovered say a harmful algae bloom was responsible for the death of whales millions of years ago. Photo by Adam Metallo/Smithsonian Institution

Before the rise of factory ships in the 1920s and ’30s, whalers often transported catches to shore-based operations to extract meat, bones, and oil, which was used for everything from tempering steel to manufacturing soap. One of the most productive sites was that of the Hektor Whaling Company, on Deception Island in the Antarctic. From 1912 to 1931, roughly 150 men labored throughout the summer, cramming the blubber and bones of humpback and fin whales into boilers and transforming them into 140,000 barrels of oil. But harpoon cannons, factory-style ships able to quickly process a multi-tonne whale at sea, and the plunging price of whale oil eventually made shore-based operations unprofitable, and the station was abandoned. Rusting boilers, rotting wooden huts, and castoff whale bones are all that remain today, joining a cemetery for the 45 whalers who died during the station’s operations. 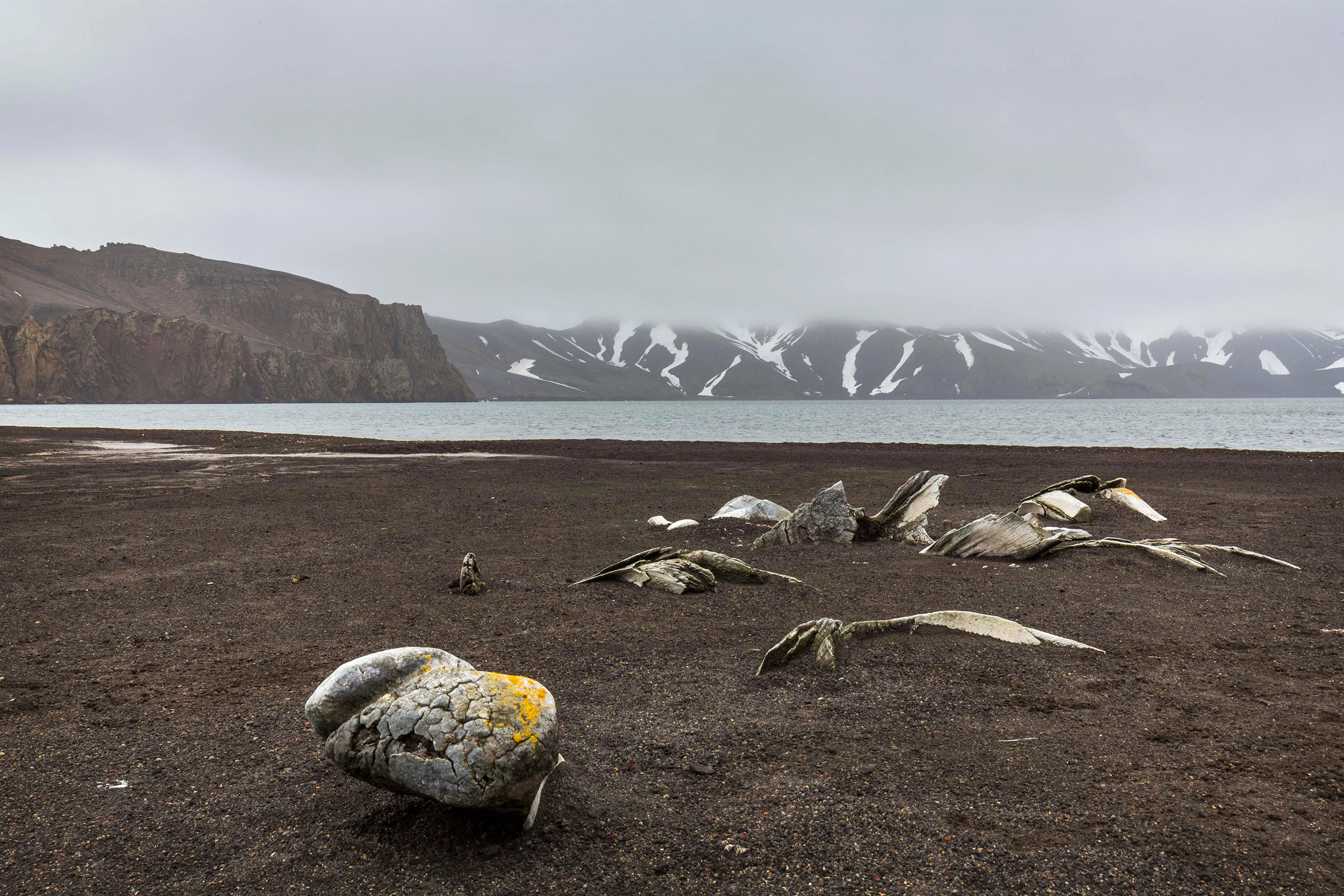 Castoff whale bones litter the coast of Deception Island in the Antarctic, a reminder of what was once a productive shore-based whaling site. Photo by B.O’Kane/Alamy Stock Photo

Namibia’s Skeleton Coast is an eerie place, named after the whale and seal bones that litter its fog-shrouded desert shores. Thanks to heavy surf and dangerous, hull-shredding offshore rocks, the coast has played host to skeletons of all types over the years. Before the 18th century, Namibia’s Khoikhoi people harvested stranded whales found along the coast, sometimes even using their bones to make homes. In the 18th century, European whalers processed their catches on the Skeleton Coast alongside hunters seeking Cape fur seals. The coast is also home to skeletons of the metal variety, having claimed countless ships over the years, including the Dunedin Star, a ship in the British Blue Star Line that ran aground in 1942, loaded with munitions and other cargo. 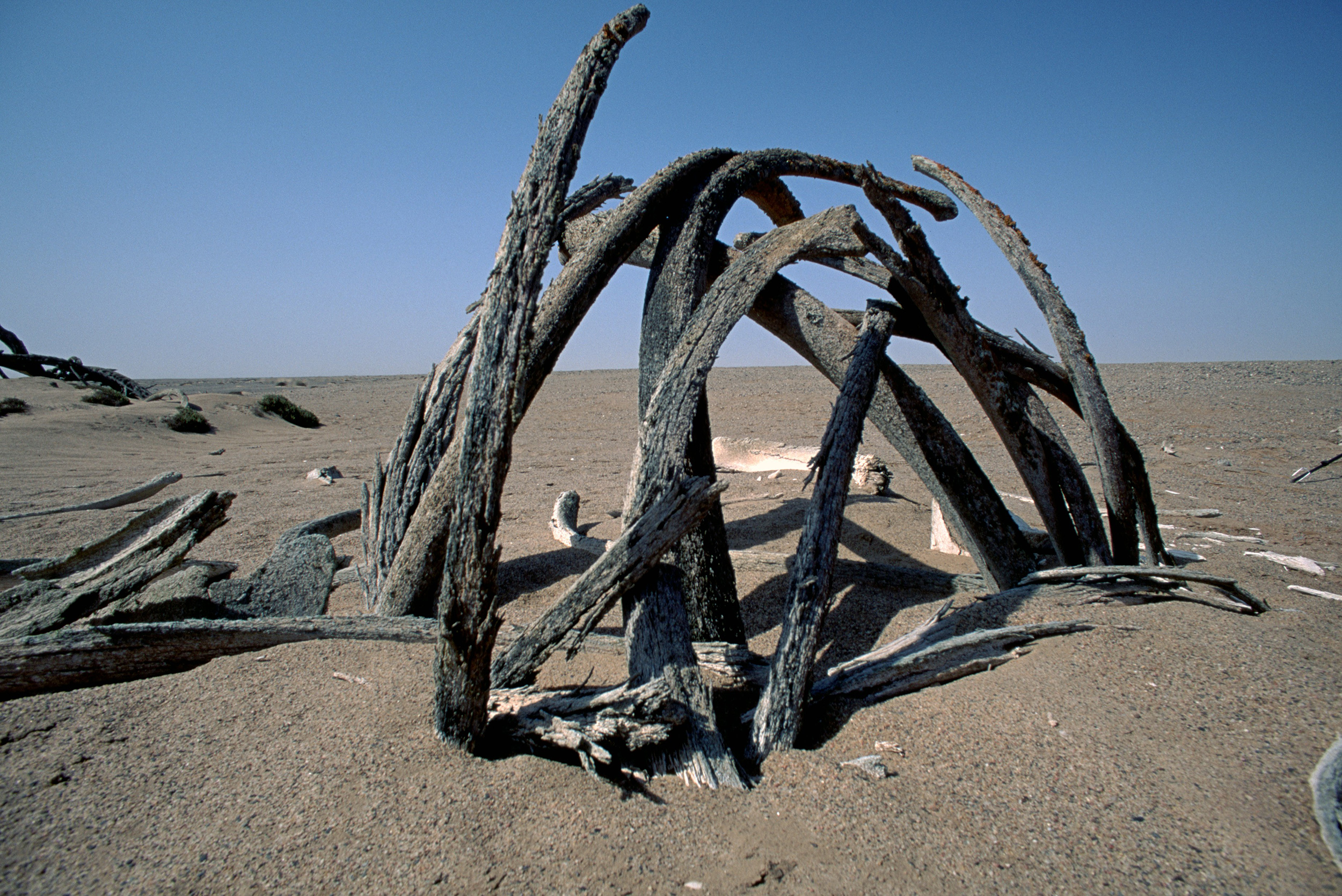 House with a view: in the 18th century, Namibia’s Khoikhoi people harvested stranded whales found along the coast, sometimes using their bones to make homes. Photo by Diego Lezama Orezzoli/Corbis

In the 1970s, Soviet scientists made an unusual discovery on Yttygran Island in the Bering Sea: two parallel lines of bowhead skulls and jawbones planted vertically in the icy ground. Dubbed Whale Bone Alley, it forms a path of approximately half a kilometer. Further excavations in the 1980s suggested the alley was built roughly 600 years ago. Scientists also found large skulls and 120 pits, some of which still contained frozen blubber and meat. Some researchers believe the site had religious significance—a large ring of boulders near the end of the alley may have been ceremonial, with the pits perhaps being used for offerings. But the local Yup’ik people believe the site served a practical purpose—since Yttygran Island lies in the path of whale migration routes, they think it was a meeting spot to butcher catches and cache meat for later use. 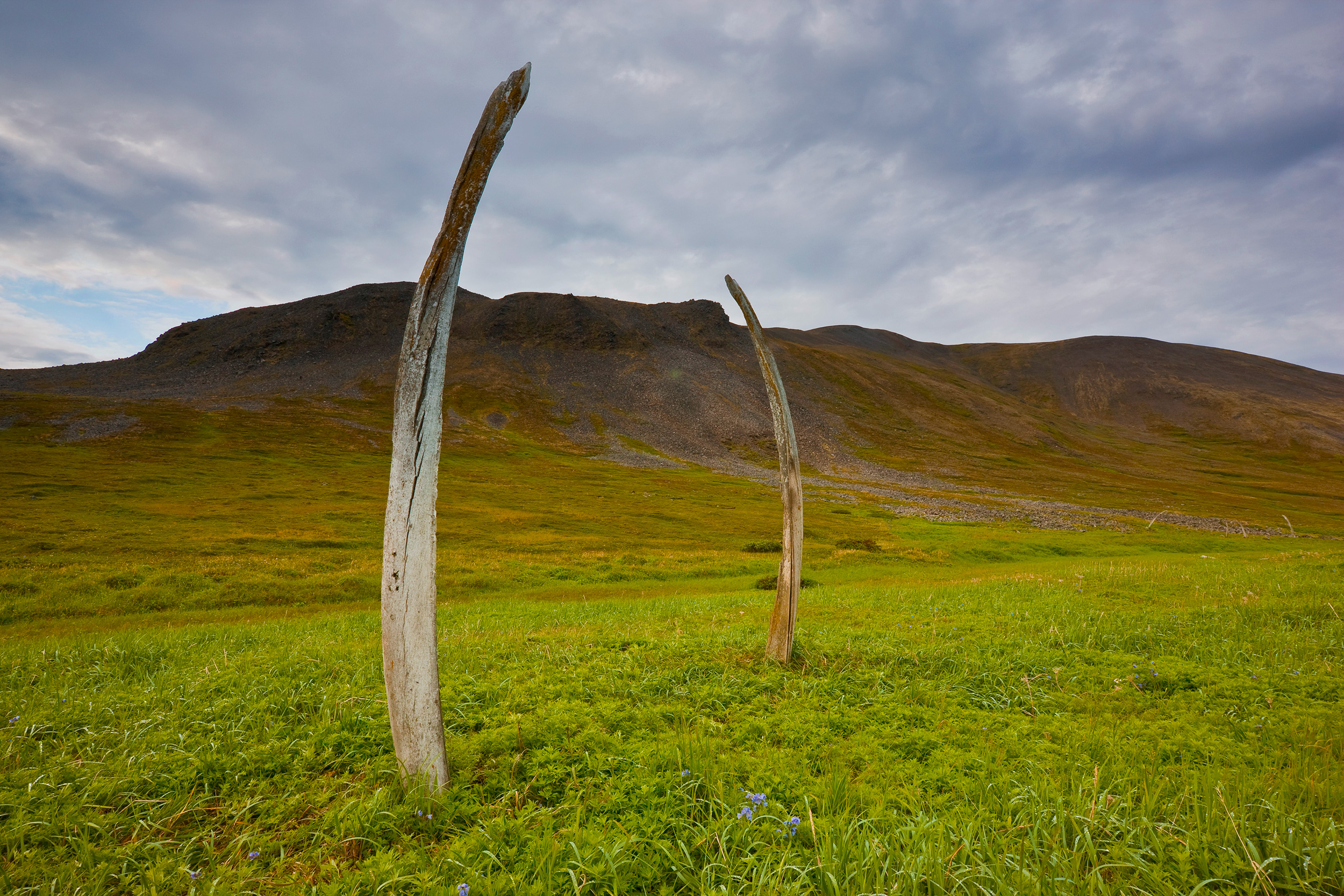 These jawbones form part of what’s been dubbed Whale Bone Alley on Yttygran Island in the Bering Sea. Photo by Jenny E. Ross/Corbis

For the Nuu-chah-nulth people of Vancouver Island’s west coast, whaling was a cornerstone of life. They used harpoons, cedar dugout canoes, and sealskin floats to hunt humpback, gray, fin, and right whales. Hunters butchered their catches onshore, creating giant whale-bone mounds. At Echachist, a site on a small island near the Vancouver Island town of Tofino, one ancient mound measures approximately five meters tall and 45 meters long. Researchers have carbon-dated dozens of Echachist bone samples, some of which were found to be roughly 1,000 years old and belonging to creatures, like the right whale, that are endangered and extremely rare locally. Learning more about the mounds not only reveals which animals the Nuu-chah-nulth people hunted, but also offers insight into changes in the marine environment over the centuries. 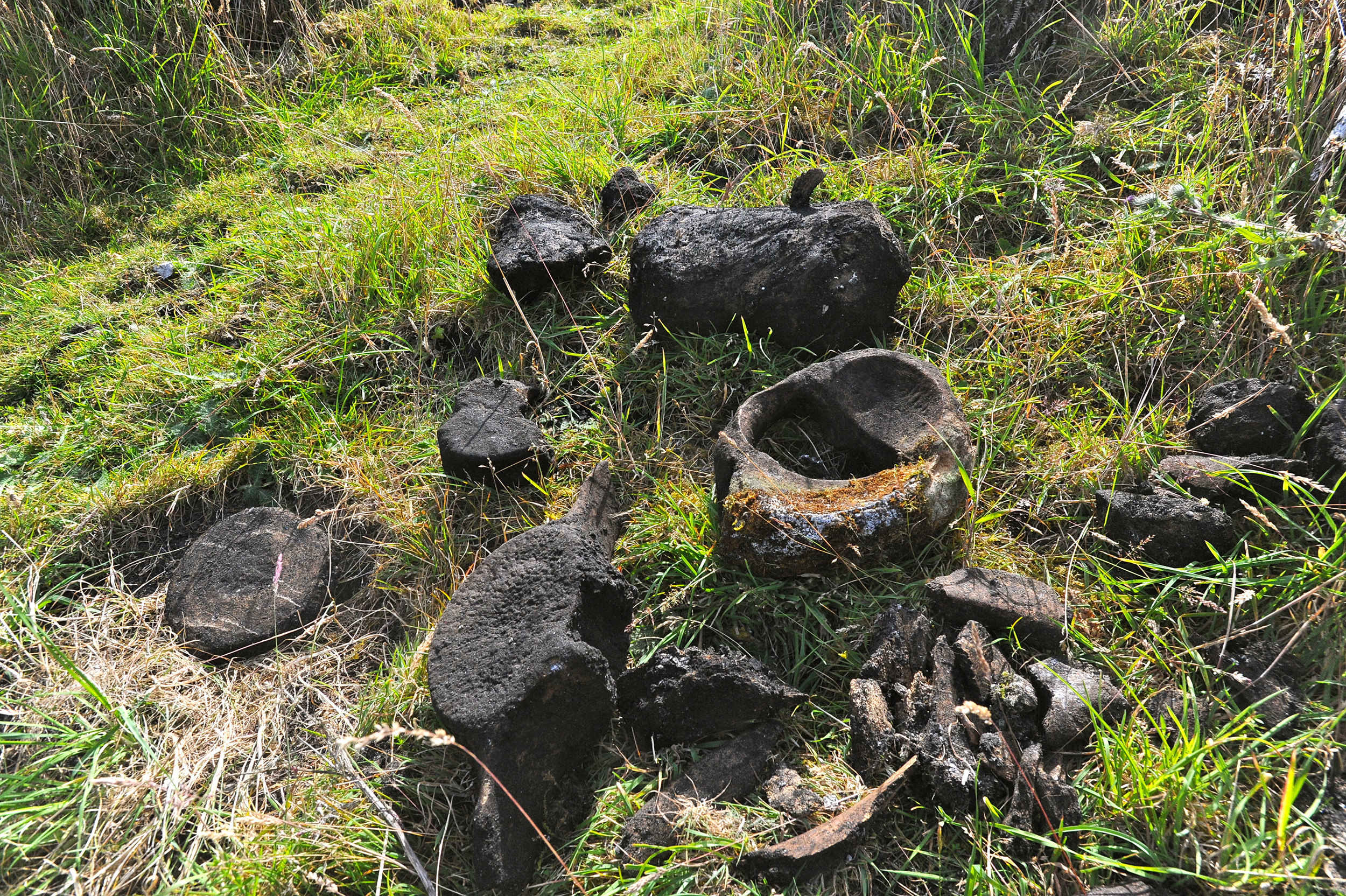 Whale bones found at Echachist, a site on a small island off Vancouver Island, reveal which animals the Nuu-chah-nulth people hunted about 1,000 years ago. Photo by Jim Darling