The biblical story of Christmas brings together an extraordinary cast of characters in an unfamiliar land—Mary, Joseph, Jesus, and a few shepherds all crowded into a modest stable. Christmas Island—one of Australia’s island territories in the Indian Ocean—also assembles diverse company in a small space. Both the holiday narrative and the island are commemorated in vivid detail by postal services. The history of Christmas Island, full of adventure, isolation, exploitation, and overarching diversity (of people and biota), shows up on both its holiday and everyday postage stamps.

Just over 2,600 kilometers northwest from Perth, Australia, Christmas Island is home to a few thousand residents. They live at its northern tip, in Flying Fish Cove (or Kampong), Settlement, Silver City, Poon Saan, and Drumsite. At 135 square kilometers, the tropical island barely outsizes the smallest of the main Hawaiian islands (Kahoolawe) and is similarly volcanic in origin.

Christmas Island formed as an atoll atop the summit of a 60-million-year-old submarine volcanic mountain. Its central basalt core is ringed by many generations of coral reef. Over time, the core was raised in a series of geological uplifts and the reef eroded into limestone cliffs that make up much of today’s shoreline. With about 100 kilometers of coast, the island boasts plenty of sand and coral beaches, and warm, shallow bays. For centuries, rainforest concealed shallow phosphate deposits in the island’s central plateau. Once discovered, the phosphate quickly spurred settlement on the previously uninhabited island. The wealth of the phosphate salt—a resource rich in the phosphoric acid vital to the manufacture of fertilizer and in other chemical processes—led to invasion, occupation, and ultimately the need to protect the island’s other critical resources from destruction.

Captain William Mynors of the British East India Company’s Royal Mary may have known the island had at least one name when he spotted it on Christmas Day in 1643. From the late 16th century, the tiny island had been either left unnamed on navigational charts or labeled with various spellings of Moni or Selam. Still, Mynors, in the tradition of European sailors of the day, rechristened the island and sailed on by. “Christmas Island” gained gradual favor, showing up on maps in various iterations in the late 1600s—Noel, Christmat, and Weihnacthten—while the use of former names persisted but eventually faded. In 1770, master navigator James Cook commented on the inconsistency, writing, “[the] Island I find differently laid down in different Charts, both in Name and Situation.” Mynors’s “Christmas Island” became official in the mid-19th century.

Day 2: A Pirate Comes to Call

In March 1688, two canoes dispatched from the British ship Cygnet made the first recorded landing on Christmas Island. The buccaneer and bestselling-author-to-be William Dampier noted it, as well as the fact that the Cygnet arrived there after unfavorable winds over 17 days pushed the ship off course out of New Holland (as Australia was then known). Apprenticed to the seafaring life at age seven, Dampier had stuck with it and would eventually circumnavigate the globe three times and help to map parts of Australia and New Guinea. He never learned to manage a ship or crew well, however, as his record of foundering, marooning, and eventual court-martialing attests. His publications included the immensely popular A New Voyage Round the World (1697), which inspired the likes of Charles Darwin and Alexander von Humboldt.

With the beginning of the monsoon season, bright crimson Christmas Island red crabs, Gecarcoidea natalis, come out of the forests and pour over cliff faces on an epic march to the sea. Red crabs from across the island move at once, synchronizing their migration with the ideal wet conditions of the rainy season. The males begin the exodus, followed by the females who join the males for mating in sandy beach burrows. Some two weeks later, the females continue on, timing the release of eggs into shallow water with the lunar cycle—between the last quarter and the new moon—when the beach is most likely to be safe. During their marathon to the sea, the crabs travel for over 12 hours and up to one kilometer a day—an astounding distance for a hockey puck-sized crab that rarely moves more than 10 millimeters a day during the dry season. To make the trek, the crabs “remodel” the proteins in their legs for endurance and vary their pace from sprinting to complete rest.

Scottish-Canadian oceanographer John Murray helped organize and sailed with the 1872 to 1876 Challenger Expedition, which became an astounding achievement in the study of ocean charting, surveying, temperatures, currents, and basins that is still valued today. With sponsorship from the British Admiralty and the Royal Society, the team of scientists, to which Murray was so key, traveled 127,600 kilometers, collecting data from hundreds of stations, conducting nearly 500 depth soundings, and taking more than 100 seafloor samples. Murray was later knighted for his work. On the Challenger’s Indonesian leg, Murray recognized the possibility of phosphate wealth in the region. After helping to establish phosphate mining on Christmas Island, Murray died in Scotland, although he left his name to the island’s highest point, the 361-meter Murray Hill.

Day 5: An Island for Seven Peppercorns

In 1887, John Murray, then working for the British Museum, analyzed rocks from Christmas Island that were gathered by a naturalist aboard HMS Egeria who had briefly landed and made several collections. Murray found the samples rich in phosphate, as he’d suspected while on the Challenger Expedition. He informed the British government, which annexed the island in 1888.

George Clunies-Ross and John Murray competed to lease Christmas Island from Britain’s Colonial Office. They duked it out for two years until they were granted a joint 99-year lease in 1891 and set about building a phosphate-mining empire.

At first Murray and the Clunies-Rosses leased the island virtually for free (allegedly for a peppercorn a year). Seven years later, when the colonial office began to charge rent, the two formalized their partnership and transferred the lease to their own newly formed Christmas Island Phosphate Company.

Day 6: A Population for Christmas Island

In 1891, three years after the British annexed Christmas Island, George Clunies-Ross sent his brother Andrew to settle Flying Fish Cove on the northeast tip of the island. Workers were imported from among the poorest populations of China, India, and the area now known as Malaysia. They lived and worked in suboptimal conditions to help build the mining empire that established phosphate extraction as the leading industry on Christmas Island. When phosphate mining waned in the 1990s, Christmas Islanders looked to tourism as an alternative source of jobs and revenue. Even more recently, the island became home to one of several offshore detention centers that hold people seeking asylum in Australia.

Day 7: The Frigatebirds of Christmas Island

With two-meter wingspans and long, forked tails, the world’s five species of frigatebird (or man-o’-war bird) use their celebrated aerial agility to occasionally pirate the kill of other species. The rarest, the critically endangered Christmas Island frigatebird (Fregata andrewsi), nests only in the tall forests on the northeast shore of the island—a rare speck of territory valuable for nesting in the bird’s otherwise watery world. The parents of new chicks share all duties at first and hunt near the nest. As the pair’s single chick ages, the male moves on to more distant marine areas, uses his festive red throat sac to attract a new mate, and breeds again. The first female then takes over provisioning and protecting the growing chick, which fledges after five to six months but remains in its mother’s care for over a year. In 2010, an expert working group for Australia’s Minister for the Environment, Heritage and the Arts recommended that the Christmas Island frigatebird be monitored and protected for recovery.

As the Second World War ramped up in the South Pacific, Christmas Island, with its rich phosphate resources, was ripe for Japanese occupation. In anticipation of possible invasion, the British supplied a single naval gun to the island assigned to Captain L. W. T. Williams, who commanded a handful of noncommissioned British officers and nearly 30 Indian troops. On January 21, 1942, Japanese forces torpedoed and destroyed the Norwegian cargo vessel Eidsvold that was loading phosphate at Flying Fish Cove. This aggression led to the evacuation of most of the island’s European families to Australia. Japan kept up the pressure with raids from the air and sea until March 1942, when Christmas Island’s district officer raised a white flag. This halted the attack, but offended Captain Williams, who re-raised the Union Jack soon after the Japanese departed, causing panic among the Indian troops who saw Japanese occupation as inevitable. They killed the British officers, disposed of their bodies in the ocean, and, for a short time, imprisoned the remaining Europeans. The Japanese did return in force, recaptured the island, and held it for the next three years. Most of the island’s remaining population was taken to prison camps in Surabaya, Indonesia, and never returned.

Day 9: The Faces of Christmas Island

At the end of the Second World War, European reoccupation began with the arrival of Allied naval forces aboard the frigate HMS Rother on October 18, 1945. Before the war, Christmas Island was a dependency of Singapore under an agreement known as the Straits Settlement. After the war, the island again came under Singapore’s oversight. In 1958, sovereignty was transferred to Australia. Today’s population is unique, consisting of Chinese, European, and Malay people, many of whom are descendants of the early residents who lived through the Japanese occupation. Diverse cultural practices pervade the neighborhoods, from call to prayer in the mosque in Kampong to British afternoon tea, perhaps served on traditional silver, in Taman Sweetland.

Perched at the edge of the Java Trench, Christmas Island is a snorkeler’s paradise. Close to shore, near the coral reef, swimmers and divers might see spinner dolphins; green and hawksbill turtles; mollusks such as nautiluses, octopuses, and squids; over 80 types of reef-building corals; and almost 600 species of reef creatures that include angelfish, parrotfish, triggerfish, surgeonfish, and moray eels. Outside the reef, above the abyss of the Java Trench (the deepest part of the Indian Ocean), tuna, scads, sailfish, marlins, swordfish, manta rays, or other pelagic marine life may swim into view. The largely undisturbed and pristine waters were protected in 1999 under the Environment Protection and Biodiversity Conservation Act. 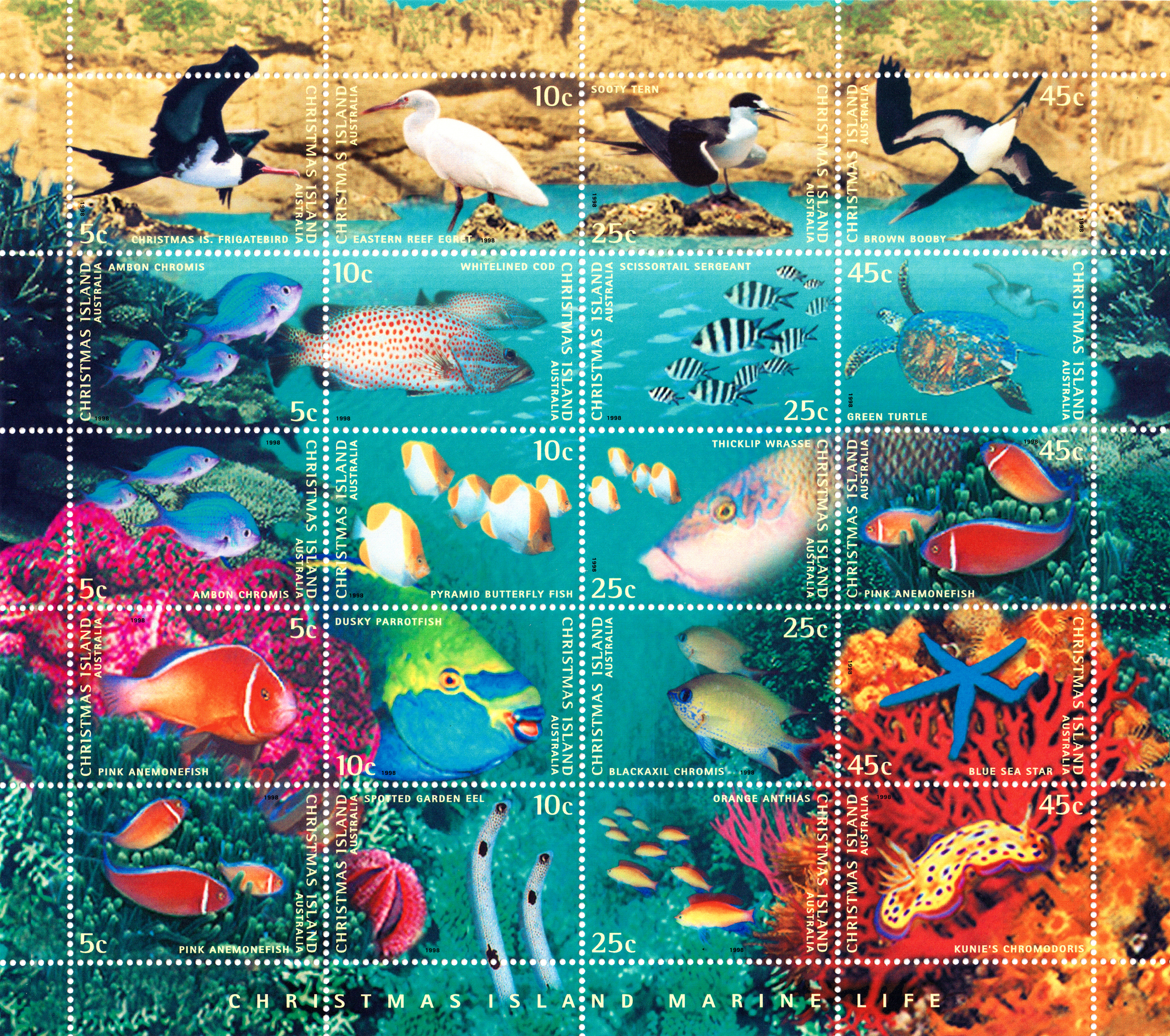 With a shorter history of human occupation than many landmasses, Christmas Island boasts more undisturbed natural areas than other islands around the world. Although mined for phosphates for decades, its ecosystems remain largely unharmed. The island’s relatively intact rainforest, unspoiled coral reefs, and pristine beaches are critical to a world where many forests have been logged, marine and other species are endangered, and rising seas encroach on coastal areas. Some of the island’s hundreds of species of plants, animals, and birds are endemic (found nowhere else in the world), including the Abbott’s booby and Christmas Island frigatebird. On December 20, 1989, in recognition of the value of the natural state of the island to tourism and the general population, the island’s three existing national parks, plus the area extending 50 meters offshore, were incorporated into one park. Today’s Christmas Island National Park, managed by Parks Australia, comprises 63 percent of the island—all of its tropical beauty and eye-popping natural heritage protected for perpetuity.