Sled dogs take a break from charging across the tundra in eastern Greenland while hunter Bendt Abelsen checks his net for seals. Photo by Ken Bower

Kunuk Abelsen’s sled dogs, blond, brown, and almost black, stood on the bright white snow outside his home and pulled on their chains. It was January, but the sea ice surrounding his island village in eastern Greenland still wasn’t firm. Abelsen and his dogs were eager to get out on the ice, but they were marooned.

“I really wanted good ice conditions, but nature is the boss,” says the 26-year-old hunter.

Most years, the sea ice arrives in the inlets along the east coast of Greenland in November. As its frozen expanse grows throughout the winter, it connects rocky islands and remote villages, and helps pave the way for hunters and their dog teams to reach the seals that congregate beneath the ice. But last year, the sea ice didn’t take shape the way people in Kulusuk had expected it to. 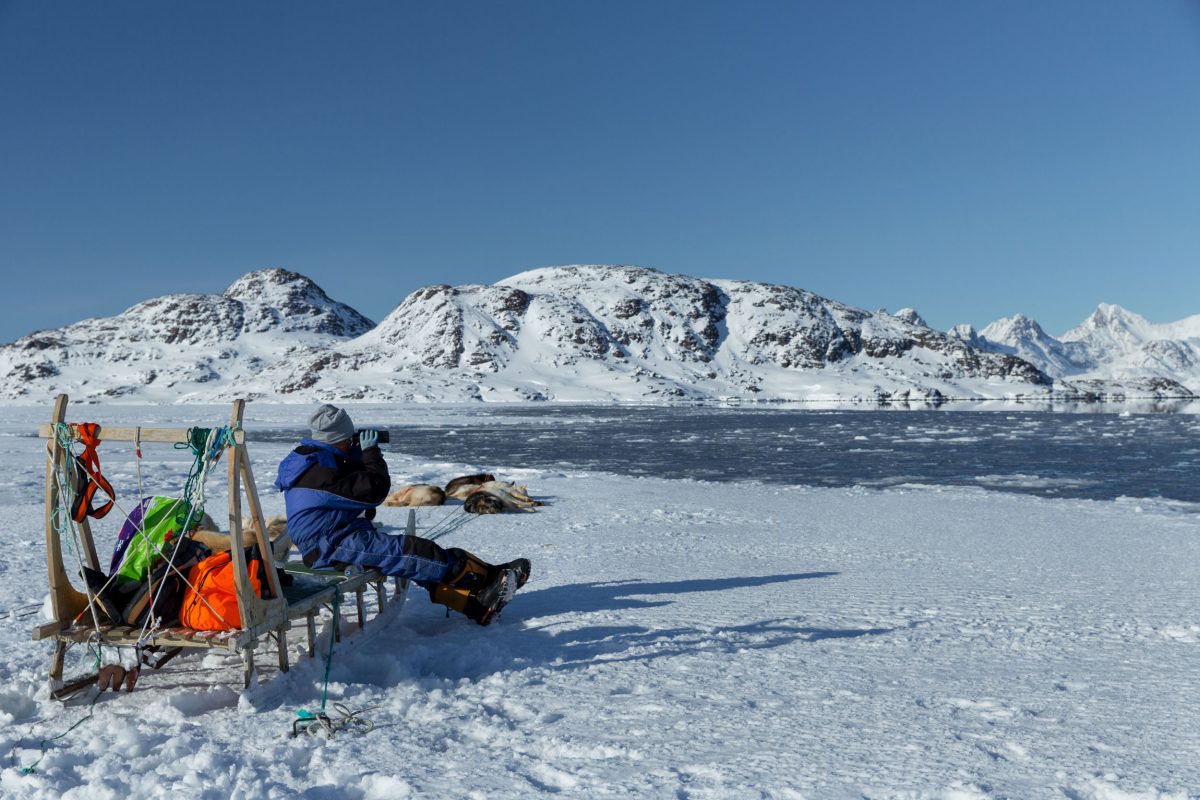 Kunuk Abelsen looks for seals from the edge of the ice as his dogs take a rest. Photo by Ken Bower

For those living in Kulusuk, which lies about 110 kilometers south of the Arctic Circle, and in Greenland’s other isolated coastal communities, sled dogs were once vital. They ferried people to hunting spots and to the homes of family and friends. Today, many people use snowmobiles to get around, but sled dogs remain essential to others.

Abelsen makes his living from hunting and fishing, earning some of his income by selling sealskins to the government. He and his father, Bendt, also shuttle skiers to the mountains by dogsled and offer polar bear tours, catering to tourists hungry for an authentic adventure.

By the new year, Abelsen was keen to put some mileage on the dogs to make the team strong and stable. “The more you use them, the more they listen to you, the more they obey you as the leader,” he says. Lives depend on that strong connection. While out on the ice three years ago, a dog Abelsen was training stopped listening to him, and they almost fell into the ocean. “It was horrifying.”

Finally, at the end of January, the waves flattened and the sea froze. Abelsen was excited to get on the ice, yet he hesitated. Was the ice safe, he wondered. “I’m a really cautious guy,” he says. “I’m not risking anything.” He waited for others to go out first, and listened to their reports before tying his dogs to the sled. 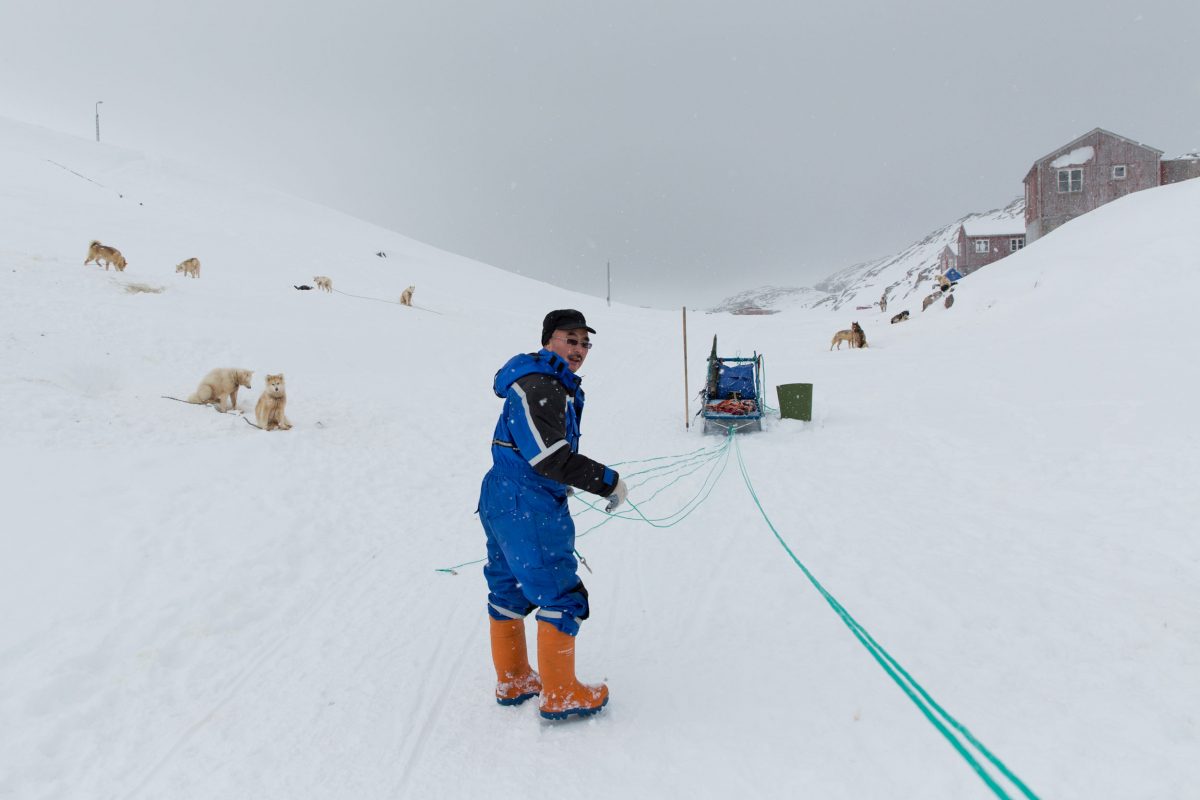 Bendt Abelsen prepares his sled for his dog team. Photo by Ken Bower

The first time he went out, Abelsen ran his dogs for about 13 kilometers north across ice that was barely thick enough to hold his team. With a yell, he stopped the dogs. A sweep of open water stretched between them and the rocky snow-covered peaks.

The rotten ice continued as the winter wore on. A February heat wave thinned the ice and made it too risky for travel. Abelsen’s cousin fell through the ice while checking his seal nets, and his father had to cancel a week-long dogsled expedition with tourists. By March, the ice edge, typically a day’s travel by dogsled, could be reached in 25 minutes.

Lately, Arctic temperatures have been freakishly warm and the flow of warm water currents means shorter ice seasons—with later freeze-up dates and earlier spring break-ups—and more frequent winter storms. When the sea ice gives way to open ocean, it creates uncertainty for sled dog owners. Last fall, Abelsen and his father struggled to feed their 28 dogs. When they ran out of seal meat in October, they purchased a pallet of dog food for about CAN $1,400. “I’m alarmed,” Abelsen says of the changing conditions, adding that if the warm weather persists, he may have to get rid of his dogs. 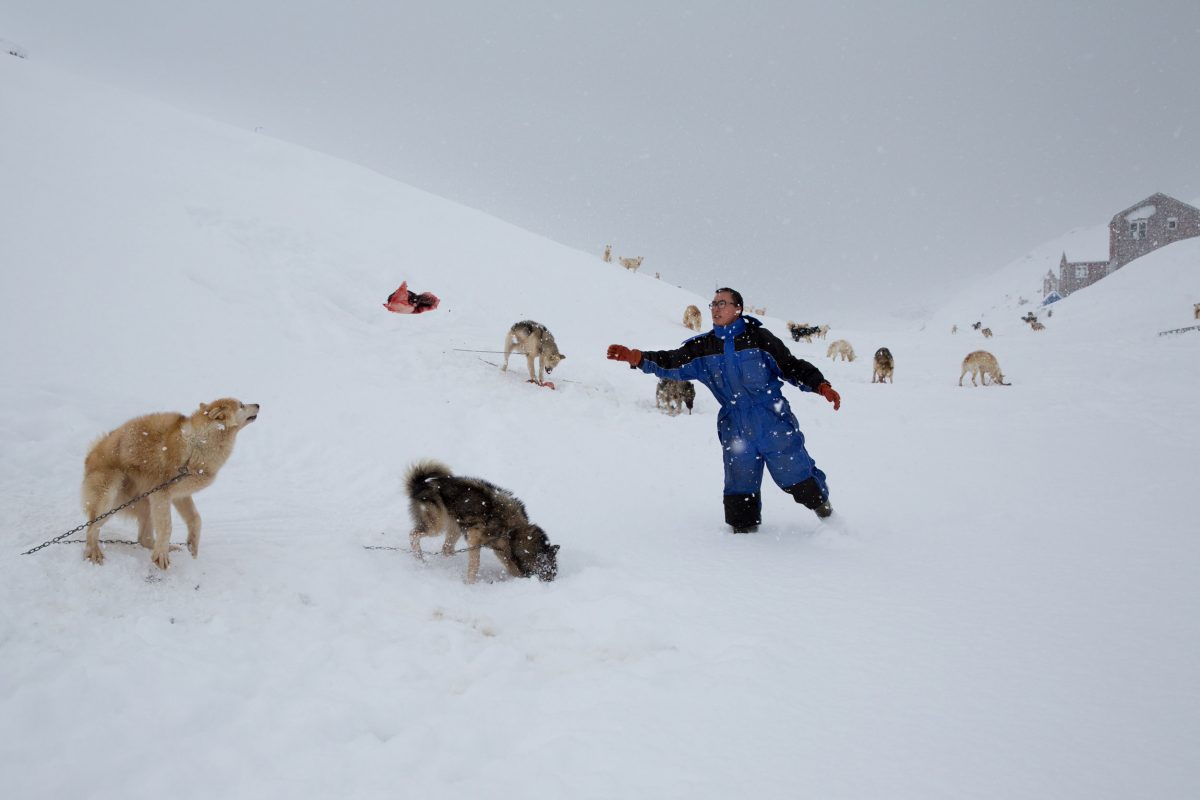 Kunuk Abelsen tosses some seal meat to his dogs after a successful day of hunting. Photo by Ken Bower

The same situation is playing out across Greenland. Although the country has the Arctic’s largest remaining Indigenous sled dog population, their numbers have dropped from 30,000 to 15,000 in a decade, says Morten Meldgaard, a professor at the University of Greenland and the University of Copenhagen who runs Qimmeq, a research project on the origins of the sled dog and its culture.

The Greenland sled dog dates back to more than 4,000 years ago, when the pre-Dorset kept dogs, probably for hunting. The next wave of people, the Thule, ancestors of today’s Inuit, also brought dogs to this Arctic island. “The sled dog was once a pillar of who we are, of how we came to be and exist,” says Pipaluk Lykke Løgstrup, a writer and filmmaker in Sisimiut, Greenland, who is working on a documentary about dogsledding.

As full-time jobs replace a subsistence lifestyle, many people are no longer dependent on sled dogs. In small settlements such as Kulusuk, people are packing their things and moving away, to Nuuk, the capital of Greenland, and beyond. For those who stay, warming temperatures and open water, some of the consequences of climate change, may well mean there’s nowhere to go by sled. Whole villages that had been dependent on sled dogs for generations no longer have working dogs—eventually Greenlanders may lack the knowledge or skills to pilot the sled. “The connection to nature, traveling into nature and being part of nature, that just disappears if you no longer have the dogs,” says Løgstrup. 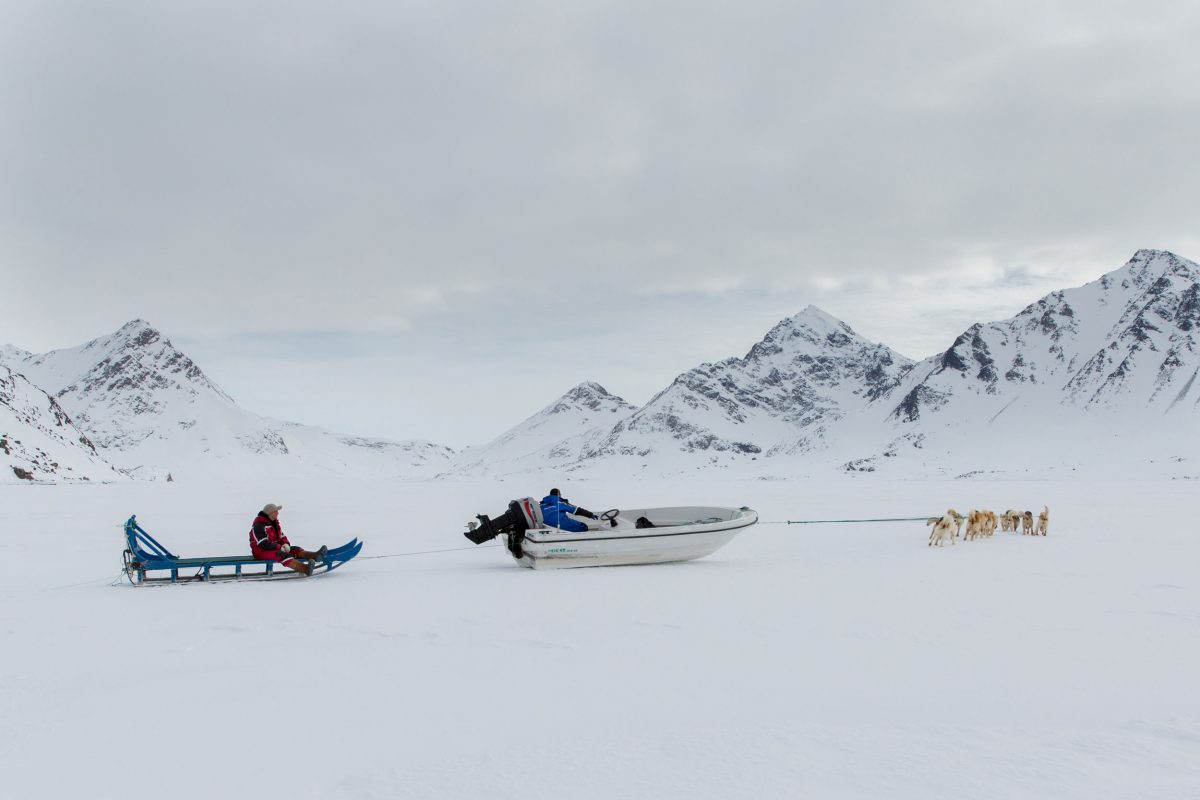 Kunuk Abelsen’s dogs pull his sled and his boat, which he decided to haul to the edge of the ice to get to better hunting grounds. Photo by Ken Bower

Last year, Løgstrup invited Inuit mushers from Russia, the United States, Canada, and Greenland to Sisimiut for an event she called Arctic Nomads. They built dogsleds typical of their regions and discussed the past, present, and future of Inuit dogsledding culture. Before they returned home, the group made 22 suggestions that might help preserve this unique culture, including food subsidies for dog owners, vaccination campaigns, and programs for school kids to learn how to groom sled dogs and hunt with them.

“If we don’t do anything, in 15 to 20 years, there may not be any sled dogs left,” says Løgstrup. “The sled dog is dependent on us for survival.”

Still, Abelsen wonders if he too will have to give up his dogs. “I always used to think that I didn’t need them. That if I had to get rid of them tomorrow, I’d be fine,” he says. Abelsen began assembling the team three years ago, a hodgepodge of sled dogs gathered from family members. They’ve since had puppies, and he’s watched them grow and get fitter. His team is now mostly made up of dogs he’s raised. He’s become attached.