and where is your heart, if not in the sea?
­­­­—Diana Hayes

They descend a narrow cement staircase to the beach; some alone, some in pairs. It is a Sunday afternoon in January. A thick mist hangs low over Vesuvius Bay on Saltspring Island, off Canada’s west coast. The damp cold is insistent, penetrating. Nevertheless, these hardy individuals have come to swim. This will not be a quick act of bravado. They will be in the bone-chilling water for over an hour, as they are most Sundays, regardless of the weather.

Diana Hayes, who started all-season swimming around Saltspring 13 years ago, is one of the first to appear. Nine other women and one man soon arrive wearing wetsuits and carrying bags stuffed with gear. They tug on booties, tuck their hair into hoods, help each other with hard-to-reach or recalcitrant zippers, wrestle on flippers and gloves. After a final transformation—the addition of masks and snorkels—the swimmers carefully negotiate a slippery ramp to the sea and ease themselves into the frigid water. Then they are away, the clumsy business of squeezing into skintight neoprene forgotten. Their black forms gleam and 11 pairs of arms and legs cut through the water, making a purposeful rushing sound.

The group is not a formal club, but the members call themselves the Salt Spring Seals. “We look like a group of animals in our black outfits,” Hayes said, when I spoke to her before the plunge. “I’ve heard tourists calling out, ‘Oh there’s a pod of seals.’” 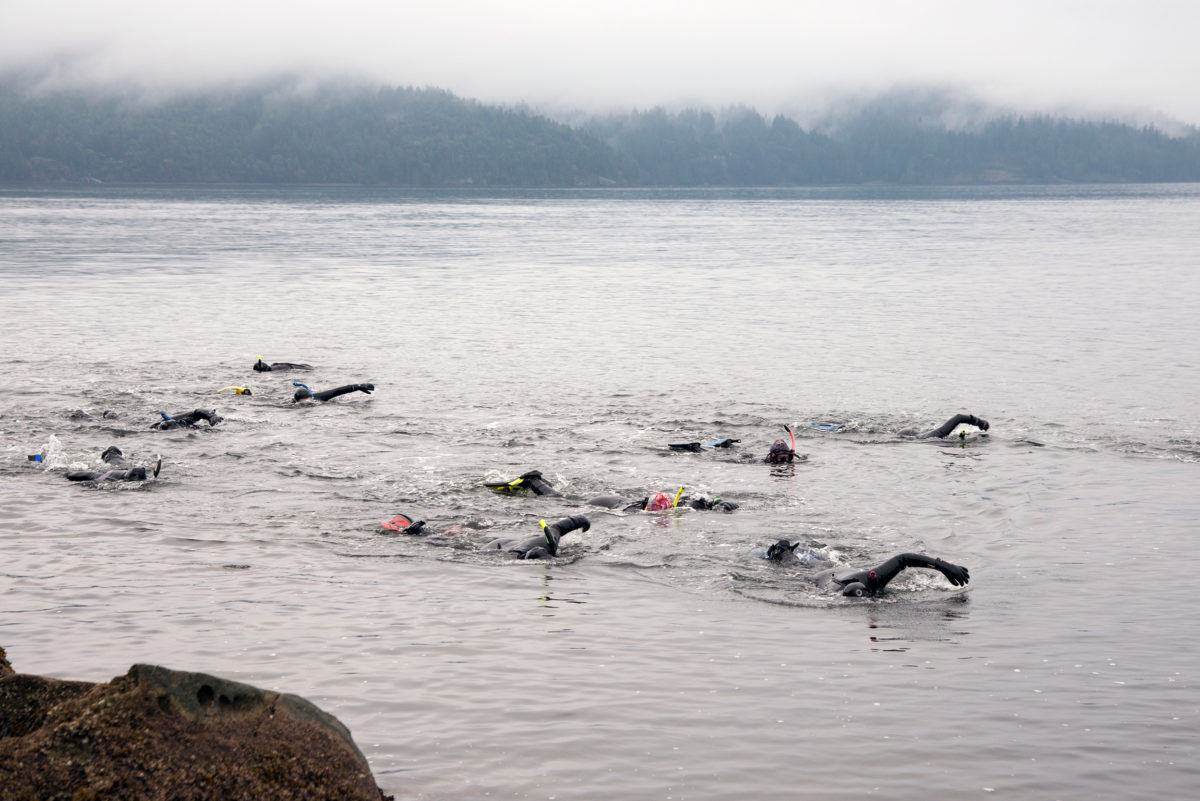 The Salt Spring Seals on a January swim in Vesuvius Bay. Photo by Shanna Baker

In winter, the temperature of the Pacific Ocean around Saltspring is about 8 °C. Water carries heat away from the body 25 times faster than air does, so in this sea, if you aren’t wearing protective clothing, you’ll lose important manual dexterity in about five minutes and become unconscious in an hour or less. You can’t survive much beyond three hours. The Salt Spring Seals wear thick neoprene (seven millimeters) to guard against hypothermia. Nevertheless, Rosamonde Dupuys, who is 65 and joined the group five years ago, admits, “There’s always the yelp when you first go in. You wonder, ‘What the heck am I doing?’ And then after three or four minutes, you get used to it.”

Most of the seals are over 55. They don’t look like super athletes; a couple are slim, but the majority have comfortably solid bodies. Elly Silverman, 75, is one of the oldest seals and a former head of women’s studies at the University of Calgary. “I’m not particularly fat,” she maintains, laughing, “but I’m not thin. Rather than casting aspersions on myself for not looking like a stick, I’m only too grateful.” A nice adipose layer helps withstand low temperatures. But why expose yourself to the chill?

For Hayes, the draw is multifaceted: “It’s therapeutic for the mind, the body, and the spirit. You benefit from the healthy air, the salt water against your skin.” Whatever ails you, she says, it will be lifted by swimming—it’s better than coffee and pills.

Exposure to cold water has been touted since Roman times when bathers followed immersions in hot and warm pools with a dip in a cold one in the frigidarium. The Finns have such a long tradition of swimming in ice water they have a name for it—avantouinti. In the United Kingdom, winter swimming has become surprisingly popular over the last decade. The Outdoor Swimming Society, which promotes the practice, has grown from 300 members in 2006 to 23,000 today.

Mark Harper, a consultant anaesthetist with Brighton and Sussex University Hospitals, advises the society and takes a professional interest in physiological reactions to low temperatures. He also swims in the English Channel—even at its nippiest, which was 5.8 °C this winter. When I reached him by phone, he explained, “If you swim in cold water, you get increased levels of adrenaline and noradrenaline. That gives you a ‘high.’”

Noradrenaline may also play a role in supressing pain, as indicated in a few small studies.

The body has potentially risky reflex reactions to cold-water exposure as well, such as an involuntary “gasp response”: “The biggest danger, if you are not used to cold water, is that you will take a really big breath and then hyperventilate,” said Harper. “If you happen to hit a big wave, your lungs might fill with water.”

He advises acclimatizing slowly. In a 2005 study, Michael Tipton and Clare Eglin, both in the physiology department at the University of Portsmouth, found that a regimen of short, very brisk (10 °C) showers can reduce a person’s respiratory rate in cold water by 21 percent.

Habituation helps winter swimmers feel warmer in the water. “If [outdoor swimmers are] still, they cool more quickly than you would expect but do not respond with much shivering and are comfortable,” Tipton explained by email. “However, when swimming they seem to stay warmer than you would predict.” More research needs to be done to clarify which of these positive effects results from regular swimming or exercise and which from exposure to cold. As he writes, “we await the definitive study.”

For Hayes, 59, the decision to take to the sea was an impulse, in February 2002. The year before, while she was being treated for breast cancer, her beloved mother was dying of the disease. Hayes recovered, but the loss of her mother was shattering: “I felt empty, numb.” In the past, Hayes had relied on running and horseback riding to relieve stress and recharge, but that became impossible—a foot injury exacerbated by the cancer treatment kept her from most physical activity. “I was just on some sort of automatic pilot.”

And then she had a powerful dream about swimming with a school of flashing silver trout. Hayes, a poet and photographer, decided to document her dream imagery with a camera. She chose a model and went to Sombrio Beach on the west coast of Vancouver Island. Thinking she might want to shoot photographs from the water, she rented a wetsuit. When she finished the series of pictures, she had an urge to swim, even though it was February and the water was bitterly cold. “I couldn’t believe how wonderful it was. It was like, ‘Oh my God, why wasn’t I doing this sooner?’ I got gear the next week. I started swimming—alone—because I didn’t think anybody else would want to go with me.” 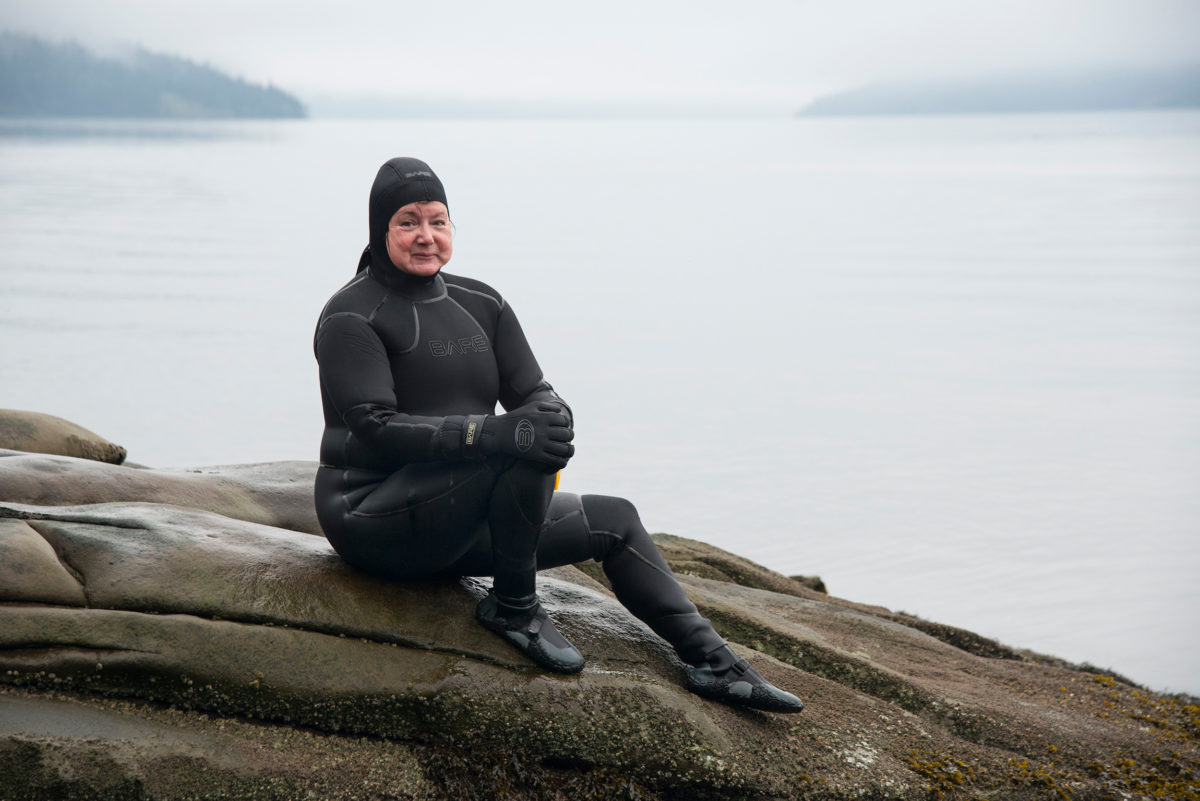 Hayes preparing for her swim. Photo by Shanna Baker

Pat Parkes, 68, joined the pod early as well. Formerly the owner of a plant nursery, she suffered a massive stroke in 1997 after she fell in her greenhouse and hit the back of her head. Four years later, back problems still affected her. “I had a special brace made. They told me I would be wearing it the rest of my life.” But once the brace came off and with encouragement from her doctor, Parkes began to swim and practice yoga. Her back strengthened.

“Pat Parkes is now the most spry, graceful, flexible seal amongst us,” says Hayes.

The health and fitness benefits of ocean swimming are only part of the allure. As Dupuys, an accomplished painter, points out, “From the shore, you see this flat lovely opaque layer. Then you put your head under and it’s a different world. It’s right there, but you don’t see it. It’s almost like a secret world.” Anemones, crabs, shrimps, and the occasional dogfish reveal themselves. Sometimes the swimmers come upon schools of fish so dense with tiny fry that moving through them is like being in a silver cloud. Shafts of light illuminate kelp forests and the seasons come and go underwater just as they do on land. In the spring, nudibranch eggs mass on eelgrass, the eggs hatch, the nudibranchs grow and drift away. And in the late summer and fall, lion’s mane, the largest known species of jellyfish, appears, waving red and orange tentacles.

Diana Hayes explains the joys of swimming in the ocean, year round, off coastal British Columbia.

In winter, the water is clearest and the conditions optimal for a glimpse of the shy giant Pacific octopus. Hayes describes one of these rare encounters in “Indigo Bite of Water”:

We form a mandala of finned feet, four bodies, eight limbs
as we stare down through the aqua-green to see his owl eyes
tufts like ears, eyesight of a hawk.

Parkes, too, recalls coming magically close to wildlife: “I have had a young seal come up to me, circle round me, and then come face to face. I stuck my hand out and then it touched my glove. It put its nose to my glove, swam around to the back, touched my fins, and then did wheelies around me. It circled really fast as if to say, ‘Can you do this?’ Once I saw an otter. I was going around a rock and he was going around the other side. He craned his little neck up and looked at me. Zoom he was gone. When people say, ‘Why don’t you swim in the swimming pool?’ this is the reason. I would never have such experiences.”

When the seals return from their Sunday circuit of Vesuvius Bay, they clamber up the ramp. Twisting and yanking, they strip off their rubber skins. Dupuys, recovering from a second hip replacement, struggles with this maneuver. Her husband, Jérôme Dupuys, has come to help. The other seals request his assistance, too, and since he is French, they merrily tease him about being their “French undresser.” Then Kelly Waters, 44, mentions feeling mildly hypothermic. Parkes produces a mohair blanket. Someone else brings tea. Another seal proffers cake.

“You build camaraderie out of your common experience,” Hayes says. “You know how a school of fish moves in unison, it seems like one big creature. Maybe we’re like a school of fish or a pod of seals. You look out for each other. You become one.”