Ceviche is a dish approached in multiple ways—but sometimes the most basic of recipes is the best. Photo by Andrew Querner

I remember the buckets. Big white ones, full of honey, that we brought back from the countryside every year when I was a boy. My mom would keep these buckets after the honey was gone. And once in a while, she’d use them to make batches of ceviche.

Ceviche is a common dish from the Pacific coastal regions of Latin America made by marinating seafood in lemon or lime juice. The citric acid denatures the animal protein and, as heat would, renders the flesh firm and opaque. The dish is traditionally seasoned with chili peppers, onions, and/or cilantro. My mother’s version has just four ingredients: fish (or shrimp), fresh lime juice, onions, and Tabasco. She used halibut, cod, or shrimp. I remember the shrimp version best, and decided to serve it to a group of friends and family to see how my mother’s recipe holds up.

Ceviche, it has to be said, was unusual in the mid-70s in West Vancouver, the suburb of Vancouver, British Columbia, where I first remember eating it. My mom had brought the recipe with her from Ecuador, which is where she met my father. She was a half-Jewish Holocaust survivor whose German family had washed up on those shores. He was a restless adventurer, an Irish-Canadian who’d lived and eaten all over the world by that fated day in 1952 when they ended up at the same house party in Guayaquil, a diverse port city on the Pacific Ocean and Ecuador’s most populous city. Our whole family cuisine reflected that background: European techniques combined with Latin classics. And when I went away to university, I took a handful of recipe cards that I had copied from my mother’s enormous deck: pot roast, stroganoff, arroz con pollo, and yes, ceviche. 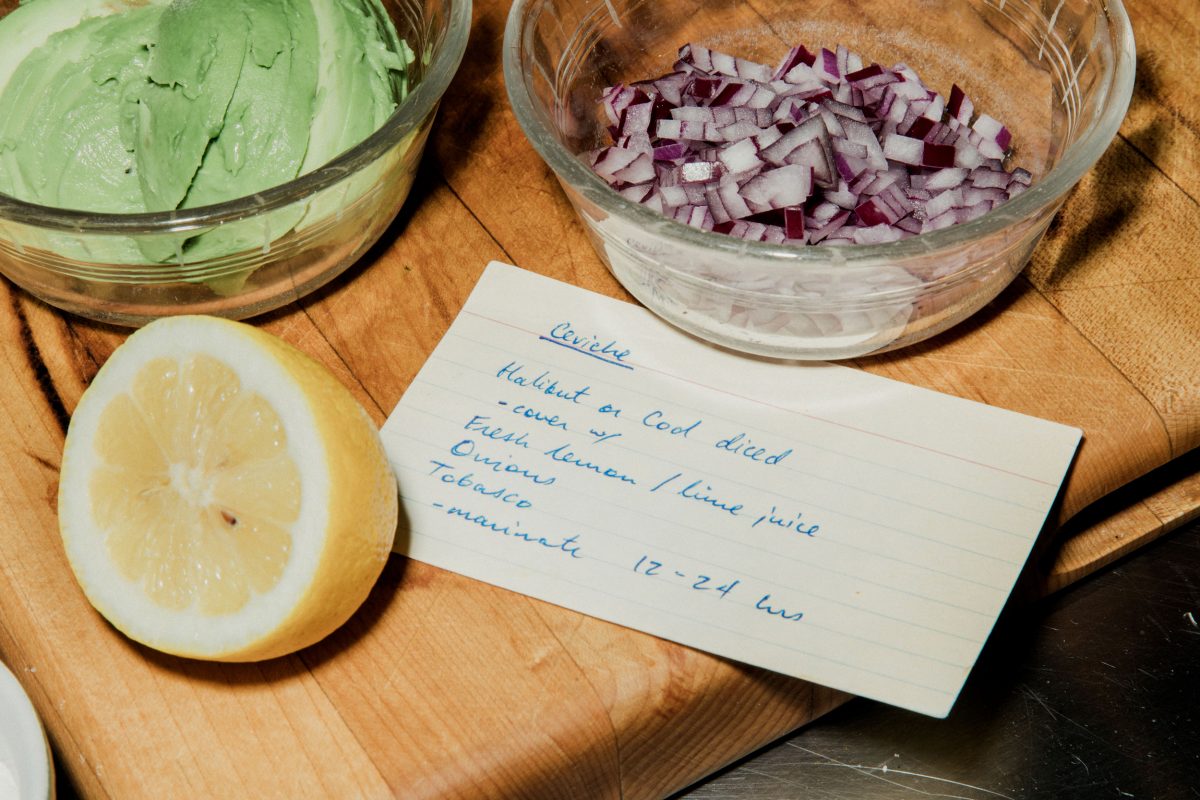 An uncomplicated recipe for ceviche delivers a complex taste. Photo by Andrew Querner

Admittedly, I never made ceviche for my roomies when I was at school. We mostly ate pizza from a place down the block called Square Boy—pizza all the way to the box corners! But those recipe cards all came out when I had my own family.

Over the years, while cooking the same Latin-European hybrid cuisine I learned from my mother, I haven’t actually used her ceviche recipe that often. I can get the ingredients now far more easily than she could have back then. As food has boomed as a widespread consumer phenomenon, crudo fish preparations have become ubiquitous: ceviche, poke, sushi. And so—as a food critic and writer and avid cook—I’ve accumulated a lot of competing ceviche recipes.

When I thought about hosting a ceviche sampling, I looked at my mother’s recipe and wondered if those four ingredients weren’t almost primitively simple compared to more modern, more developed versions of the dish with dozens of ingredients. Iron Chef Jose Garces is one of my culinary heroes. And I used his book The Latin Road Home as my authority on modern ceviche as it offers no less than eight approaches to the dish. These tend to be elaborate. There’s one calling for a Habanero-based spicy marinade, leche de tigre. In another version, pink snapper is marinated in passion fruit juice. Elsewhere, a Japanese-influenced tiradito sauce incorporates yuzu (a citrus fruit), soy, and sesame. Garnishes are similarly inventive and culturally combinatory: lemongrass, black sesame, garlic chips, and Thai basil.

Some ceviche recipes call for dozens of ingredients but fail to deliver an elemental eating experience. Photos by Andrew Querner

Interestingly, Garces’s recipe for Ecuadorian shrimp ceviche—a highly evolved descendent of the ceviche de camarones that my mother used to make—is the simplest of the eight in the book. It has merely 30-odd ingredients compared to Peruvian versions that have many more. Laid out on my worktable in the kitchen, this makes for a striking visual. My mom’s ceviche had been assembled the night before because her instructions call for whatever fish or shrimp you’re using to marinate for 12 to 24 hours. (She was never overly precise in her recipes.) I did this in a glass bowl, not having any buckets handy. I also refrigerated the mixture and didn’t just leave it on the dining room table overnight as I recall my mother doing. But, during preparation, the ingredients in that bowl took up one corner of my cutting board while the Garces ingredients cover almost every other available square inch of table and counter space in my kitchen: tomatoes, limes, avocados, parsley, cilantro, jalapeños, green and red and white onions, vinegar, agave nectar, ketchup, etc.

I use beautiful, locally caught sidestripe shrimp for both batches. An excellent product frozen at sea in blocks of seawater minutes after capture, the shrimp are about a finger long each with succulently sweet flesh. For the ceviche de Garces, I poach them very quickly in salted water with lemon and garlic. After an ice bath and a paper towel dry, I nap the shrimp in a sauce made with chilies and orange and lime juice, sweeten with ketchup and honey, and emulsify with oil. Plate with scallions, jalapeño, red onion and avocado, and serve with the spicy Ecuadorian green sauce called ají costeño, the dish is vibrantly colorful and explosive on the palate. The tastes are complex and stimulating, with heat and sweet playing back and forth. And because it’s Ecuadorian, the dish is also served with popcorn so the textures are just as playfully contrasting as the flavors.

Which brings our group to the second dish of the evening, ceviche de mi madre. And here I have an entirely different experience, a madeleine moment, as when French author Marcel Proust famously tastes one of those petite sponge cakes and is transported back to boyhood and mornings spent with his auntie. For me, the transport comes with the first smell. My eyes close, and I’m instantly in that dining room, those buckets giving off the aroma of a spicy, citrusy sea. After almost 24 hours of marinating, the dish smells nothing like any of its original constituent ingredients. There’s no harshness to the onions, which have become almost entirely sweet. There’s almost no acid to the lime juice, which has taken up the shrimp and become only fragrantly briny. But the shrimp themselves are the biggest and most wonderful surprise, faintly effervescent, as if what started so absolutely fresh could be made yet fresher. Tangy, sweet, crisp on the palate.

We’re all eating these shrimp one by one, firm to the tooth after a day in the marinade, so bright in the mouth. I’m floating on a memory. And I know exactly what he means.