Members of the Indigenous advocacy group Ancestral Guard break down a freshly caught spring salmon ahead of a cookout at the Noyo Headlands in Fort Bragg, California. Photo by Rian Dundon

This story was originally published in High Country News and Roads and Kingdoms.

Hillary Renick hikes down scree and rocks worn smooth by waves to reach the sandy beach below. The morning fog has receded, but the sky is still gray along the coastline of Mendocino County, California, as Renick scrambles up, down, and around Pomo village and nearby sites, where her people harvest traditional foods and collect materials for regalia, such as shells. “The rocky inlets are where the abalone hang out,” says Renick.

Renick, a citizen of the Sherwood Valley Band of Pomo Indians, and her crew of self-described “guerrilla gatherers” are scouting Glass Beach in Fort Bragg for abalone, seaweed, and shells they use for food, regalia, and ceremonies. “We like to say we’re badass Indian women gathering under cover of darkness, crawling under fences, over rocks, around No Trespassing signs, and through the mud to provide for funerals, feasts, and celebrations,” Renick says—although men are also part of the group.

Renick and her friends and family routinely defy California laws and natural resource management regulations they say obstruct their right to maintain these traditional practices. The stakes are high: Indigenous peoples risk jail time, tens of thousands of dollars in fines, and the lifetime loss of state hunting and fishing privileges for doing what they’ve always done in this area. But they say the possibility of losing this connection to the land outweighs the legal risks. 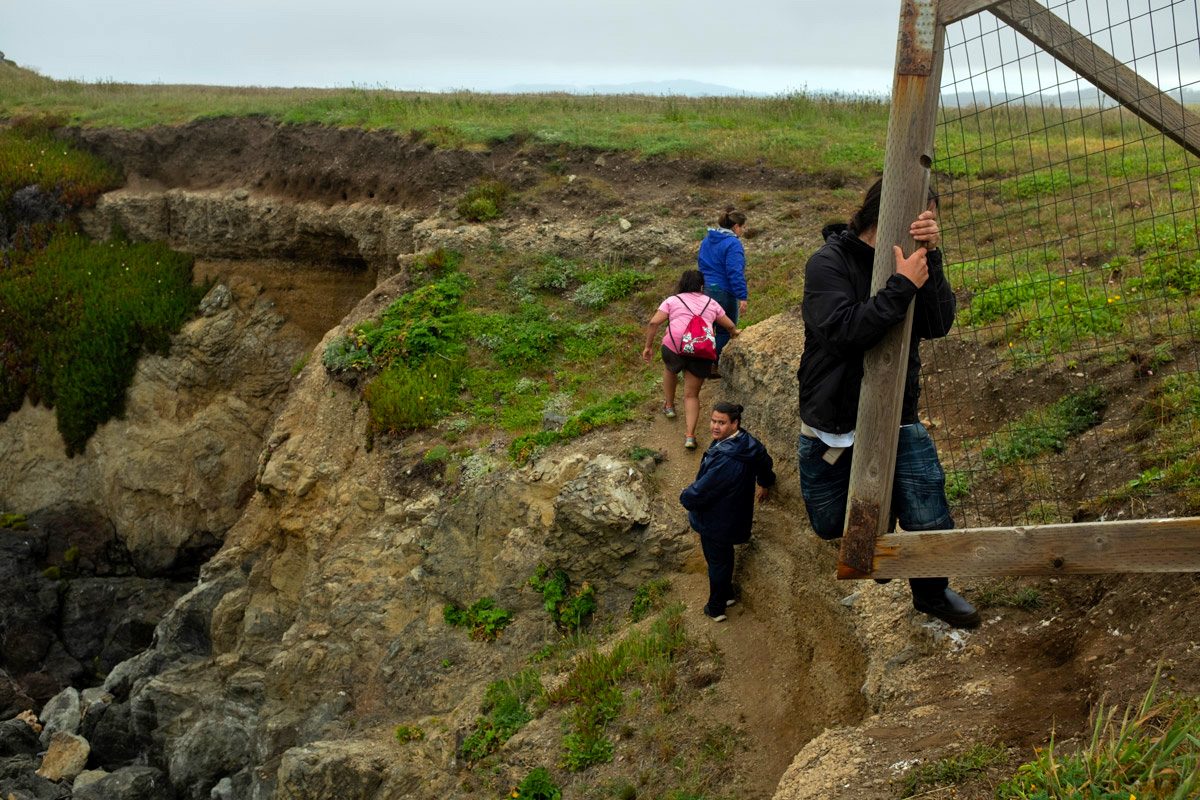 Hillary Renick (blue jacket) and other Indigenous gatherers skirt the fencing around a restricted area of the Noyo Headlands in Fort Bragg, California. For millennia, tribes have sustainably harvested mollusks, surf fish, seaweed, and shells in areas from which they are now barred. Photo by Rian Dundon

In June 2019, California Governor Gavin Newsom issued an apology to the more than 155 Indigenous tribes in the state for decades of genocide, oppression, and neglect—wrongs that included suppression of traditional subsistence rights. For millennia, Pomo, Coast Yuki, Sinkyone, Yurok, and other Northern California tribes have sustainably harvested mollusks, surf fish, seaweed, shells, and medicines in the summer, as well as acorns and other inland foods, Renick says. But the state still regulates fishing, hunting, and gathering. Decade after decade, tribes in California have had to find ways to maintain their traditional ways of life in a state that has made this challenging—or even illegal.

In 1851, after California became a state, Governor Peter Burnett declared in an address to the state legislature, “That a war of extermination will continue to be waged between the races until the Indian race becomes extinct must be expected.” According to historian Benjamin Madley, from 1846 to 1873 between 9,492 and 16,094 Indigenous peoples in California were killed, many in massacres conducted by state and local militias. Thousands more starved or were worked to death by forced labor, and historians estimate that around 80 percent of Indigenous peoples in California died between statehood and 1880.

In addition, 18 treaties that the United States negotiated with California tribes were never ratified by Congress, which has made the tribes’ contemporary situation more challenging.

“The fact that they don’t have those treaties has had a long-term effect on California tribes,” says Brendan Lindsay, author of the book Murder State: California’s Native American Genocide, 1846–1873 and an assistant professor at California State University, Sacramento. “The lack of treaties makes advocating for land, subsistence, and other rights much harder.”

Tribal nations that have federal treaties or legal protections tend to have stronger legal footing for defending subsistence hunting and gathering. For example, in the 1990s, Ahtna elder Katie John won subsistence fishery rights for Indigenous peoples in Alaska in federal court. And in June 2018, the Supreme Court affirmed a lower court ruling in favor of tribal fishing rights due to 19th-century treaties negotiated with the federal government. But California tribes have no such recourse. 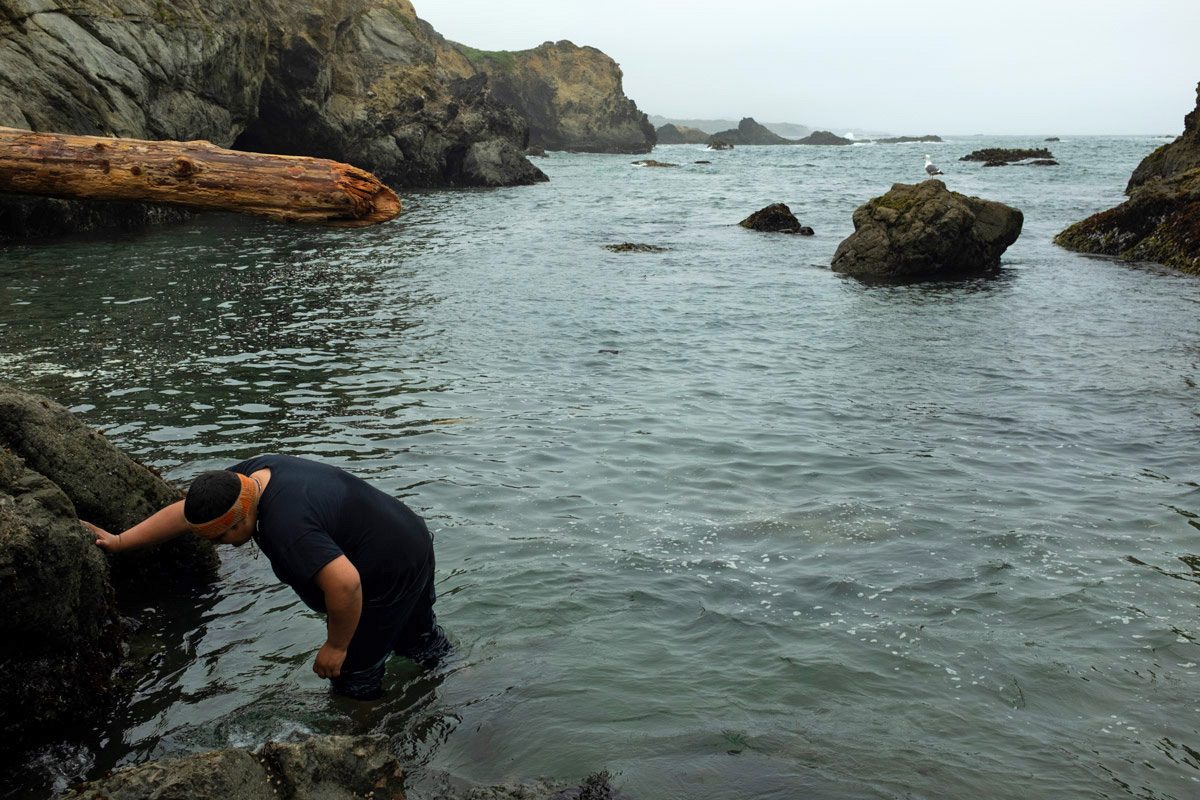 Gatherers risk fines of up to US $40,000 and the lifetime loss of state hunting and fishing privileges for collecting as they have for generations. Photo by Rian Dundon

For Hillary Renick’s family, grim relations with settlers have been a constant theme. In 1856, the 10,000-hectare Mendocino Indian Reservation was established in what is now Fort Bragg and the surrounding area. In 1868, the land was taken from Renick’s family and sold by the federal government to what Renick says were primarily soldiers and loggers. “My family managed to hold on to a bit of the Noyo Headlands, even though Fort Bragg and the lumber company kept trying to push us out,” says Renick.

Today, Renick’s extended family occupies several homes in the 1.6-hectare plot, separated from the Noyo Headlands Preserve by fencing. Pomos, Coast Yukis, and other Indigenous peoples still come to camp and gather in the area. Their ancestors faced vigilantes and bounty hunters, but now there are new challenges: state laws and regulations that interfere with long-held traditions of harvesting food and regalia materials.

“The fishing rights cases for California are contentious,” Renick says. “The state always brings up termination-era legislation [from the 1950s and ’60s] to justify exerting exclusive authority over coastal waters and lands.”

But one law that Renick says interferes with Indigenous subsistence rights was enacted in 1999. The Marine Life Management Act’s goal is to preserve fish, shellfish, and seascapes, and to repair damage caused by climate change, overlogging, and overfishing. The act allows the state to manage whole marine ecosystems and gives authorities greater enforcement power. But Renick says it overlooks Indigenous peoples and their traditional practices.

Poaching has also become a headache for both Indigenous peoples who depend on shellfish for food and for the California Department of Fish and Wildlife (CDFW) wardens. Despite expanded aquaculture, abalone is still in strong demand, mostly in Asian markets. Just one black market California abalone can fetch US $100 or more, and law enforcement officials estimated in 1997 that 4,800 abalone were poached in Northern California every diveable day.

“It’s been especially agonizing to watch the number of poachers increase exponentially in the past years,” says Renick. “We’ve observed poachers using Zodiac rigid inflatable boats and illegal scuba gear clearing entire tide pool ecosystems of key species, which devastates both the population ecology of the nearshore and the Aboriginal subsistence lifestyle that we maintain.”

In contrast, Renick and other Indigenous peoples insist they are mindful of how they harvest, taking only what’s needed and ensuring future subsistence needs will be met. “Being here, harvesting our traditional foods and materials, ensures that we nurture our relationship with the lands and waters,” says Renick.

CDFW spokesman Patrick Foy argues that poaching has decreased since the ban went into effect. He says the California Fish and Game Commission, which sets policy for the agency, has a tribal representative from another North Coast tribe and that the commission consults with tribes. Foy says of the commission’s move to cancel the abalone season that “sometimes tough decisions have to be made.” 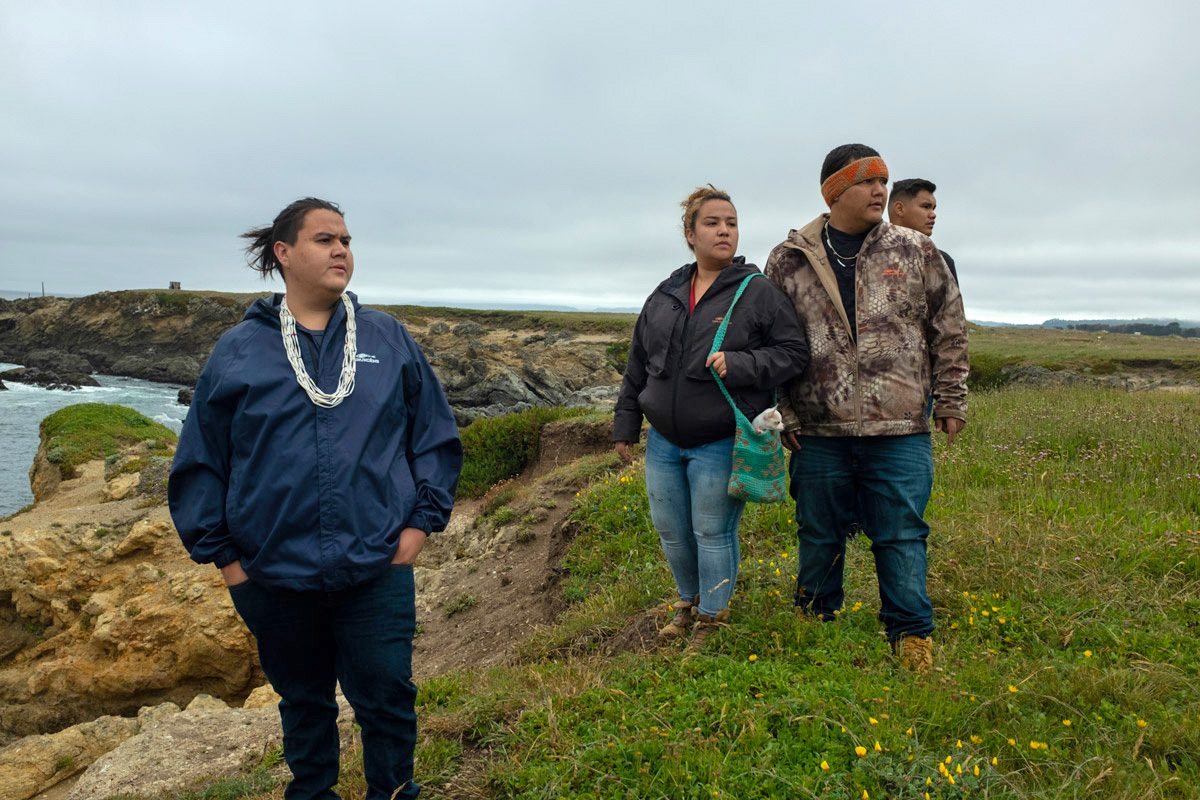 Abalone isn’t the only coastal food coveted by non-Indigenous foragers. High-end restaurants have a demand for various species of seaweed, another staple in coastal Indigenous peoples’ diets. Commercial foragers dominate the scene, leaving little or nothing for subsistence purposes. “For $175 you can harvest all the seaweed you want because you’re allowed to self-regulate,” says Renick. Such foragers, she explains, often take far more than they report, depleting the resource for others.

To Indigenous peoples living in the food deserts of Northern California, sea palm, tono (the Pomo word for some of the more common seaweed along the coast), and other such greens of the ocean don’t just hold cultural significance, they’re an important source of nutrition.

At Noyo Headlands Preserve, Lena Belle Gensaw, a citizen of the Yurok tribe, carries her teacup chihuahua, Panini, in a shoulder bag as she climbs down a steep cliff to the rocky shore. She’s traveling with her cousin, Sammy Gensaw, and members of Ancestral Guard, an Indigenous advocacy group from the far North Coast. They made the four-hour trip from Klamath to fish and visit with the Pomos—a centuries-long tradition of neighborliness.

To prepare for a cookout at the Noyo “rez,” Sammy Gensaw searches a woodpile for alder, which he says gives off a smoky heat that will enrich the flavor of salmon as it grills over a pit fire.

The abalone’s pink meat is prized for its sweet, salty flavor and slight crunch. Some describe it as a cross between shrimp, scallop, and octopus, but for Gensaw and the others gathered here, it just tastes like home. Mollusk—with its savory, salty flavor—and seaweed complement the freshly caught salmon the Yuroks brought for the meal.

While the food cooks, the conversation turns to more mundane concerns and even some gossip. “It’s pretty easy now with technology to figure out when the tide is right,” says Shawn Padi, from the nearby Hopland Pomo community, as he looks out over the waves. “A hundred years ago, you’d have to read the moon and leave the valley three days ahead of time to walk over here and hit the big tides.”

Talk soon turns to more serious topics. Gensaw and Renick discuss how the Yuroks can bring abalone back to their own diets and, of course, the law and why the guerrilla gatherers need to defy it.

Renick says when it comes to prohibitive state regulations, the solution is simple: “Change the laws.”

This article was supported by the Economic Hardship Reporting Project.