Sharks ruled the waters of the Mediterranean for hundreds of thousands of years before humans ever so much as dipped a toe into the waves. Before overfishing and fear-driven persecution put the run on them, some sharks were the Mediterranean’s apex predators, weeding out sick and weak individuals and ultimately enforcing a balanced and robust ecosystem through the virtue of their jagged teeth.

But when humans began to take to the water, things quickly went sour. Soon, writers and artists began portraying sharks in the role of villain.

In an effort to better understand the way our relationship with sharks has changed throughout history, Massimiliano Bottaro, a marine scientist at the Anton Dohrn Zoological Station in Naples, Italy, and his colleagues went through thousands of years of historical and archaeological evidence and artistic depictions. Their results, published in Regional Studies in Marine Science, found several dozen records of interactions between humans and sharks, as well as rays, a close relative.

The earliest evidence of interaction was gustatory—shark bones left over from late Stone Age meals in caves in southern Italy and Spain. Then, over the years, images of sharks appeared on bowls, vases, and in mosaics; they were written into histories and epic poems; and, in one case, part of a ray became a religious relic affixed to the wall of a church. These accounts provide some biological insight into species’ presence and abundance before overfishing and intense environmental degradation brought on by the Industrial Revolution precipitated a cascade of changes in the Mediterranean ecosystem. The records also reveal that fear and misunderstanding have complicated our relationship with sharks since some of our earliest encounters. 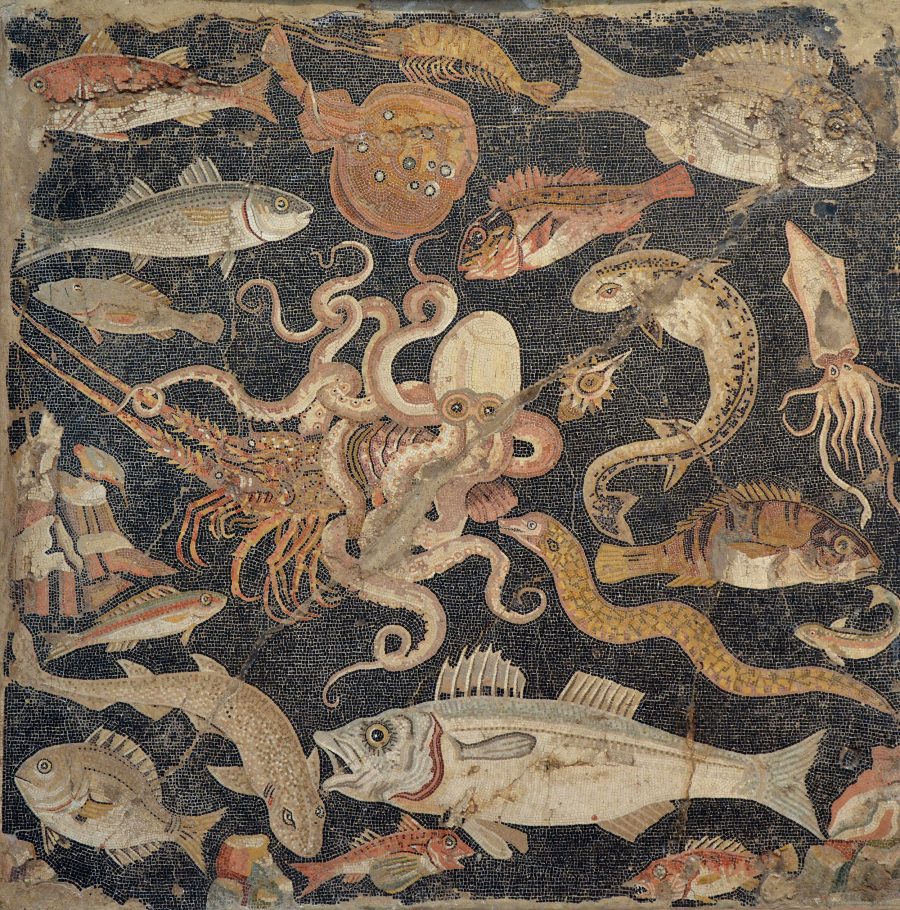 This second-century BCE mosaic from a Roman house in Pompeii, Italy includes what appears to be two sharks, a nursehound in the middle right and a lesser spotted dogfish in the lower left, and a torpedo ray, a type of electric ray, in the top center. Photo by Naples National Archaeological Museum

In 492 BCE, the first Persian invasion of Greece was proceeding well for military commander Mardonius. According to Histories, Greek historian Herodotus’s classic, Mardonius had already “deposed all the despots” of the Ionian Islands, replacing them with popular governments and forcing the Macedonians into servitude. Mardonius’s luck didn’t last. His fleet was caught in a nasty north wind, sinking some 300 ships against the cliffs of Mount Athos. In Herodotus’s account of the event, “sea monsters” moved in to “seize and devour” many of the 20,000 sailors in the water, marking what’s likely the first infamous appearance of sharks in literature.

While Herodotus could be taking artistic liberties in describing so many shark deaths, Bottaro speculates the tidbit could reveal a snapshot of historical shark abundance. “In that time … the Mediterranean Sea was so full of sharks that after an incident in a ship, sharks came immediately, [following] the olfactory trace of blood,” he says, adding that the noise of drowning, flailing sailors could have also been a draw.

Herodotus’s account that shark attacks could be a potential hazard to mariners is reflected in the work of visual artists. One of the earliest known images of sharks in the Mediterranean comes from an eighth-century-BCE ceramic bowl found on the island of Ischia in the Gulf of Naples—an area that saw intense maritime commerce at the time, according to Bottaro. The bowl shows sailors fighting off a large marine creature reminiscent of a great white shark. 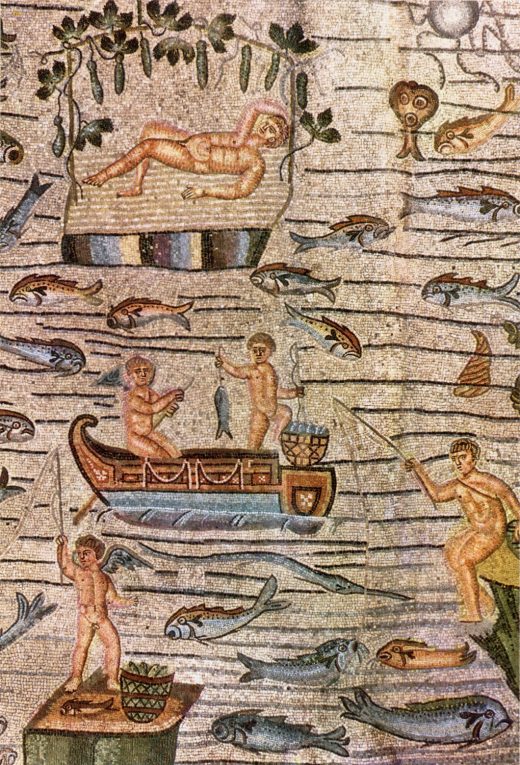 A fourth-century mosaic from Aquileia, Italy, shows a torpedo ray in the top right corner. Photo by Yukio Sanjo

About five centuries after the Persian campaign, Roman philosopher and naturalist Pliny the Elder illustrated shark abundance when describing the swarms of dogfish that plagued sponge divers in Natural History. “Divers have fierce encounters with sharks, which make for their groin, heels and all the pale parts of their body. The only safe course is to turn on the sharks and frighten them. For sharks fear men just as much as men fear them,” he wrote, adding that divers searched for places with a particular species of flatfish, the presence of which indicated that sharks—“noxious monsters” in some translations—were likely absent.

Pliny is the first known author to describe the interactions between sharks and humans in some detail, but one of the earliest accounts that broke the shark-as-man-eater rhetoric was written about 500 years earlier. In History of Animals, Greek philosopher and scientist Aristotle detailed shark biology and ecology in a way rarely seen before the Renaissance. In one passage, for instance, Aristotle described sharks’ use of shallow water nurseries: “Cartilaginous fishes come out from the main seas and deep waters towards the shore and there bring forth their young, and they do so for the sake of warmth and by way of protection for their young.”

Mark Bond, a shark expert at Florida International University, says Aristotle’s descriptions of nurseries and his observation that some sharks hatch from internal eggs before exiting their mothers is fascinating, and provides further evidence of the abundance of the species at the time. “You would have thought that [sharks] must have been that much more abundant for [Aristotle] to pick up on stuff that we are still investigating centuries later,” he says.

Art from these early periods also sheds light on the species present in the Mediterranean. A fourth-century mosaic from the ancient Roman city Aquileia shows a variety of fish, including a type of electric ray, while another mosaic from roughly 200 years earlier in Pompeii shows two sharks and an electric ray. The great graphic detail in these pieces allows modern researchers to clearly identify most of the species, Bottaro says. 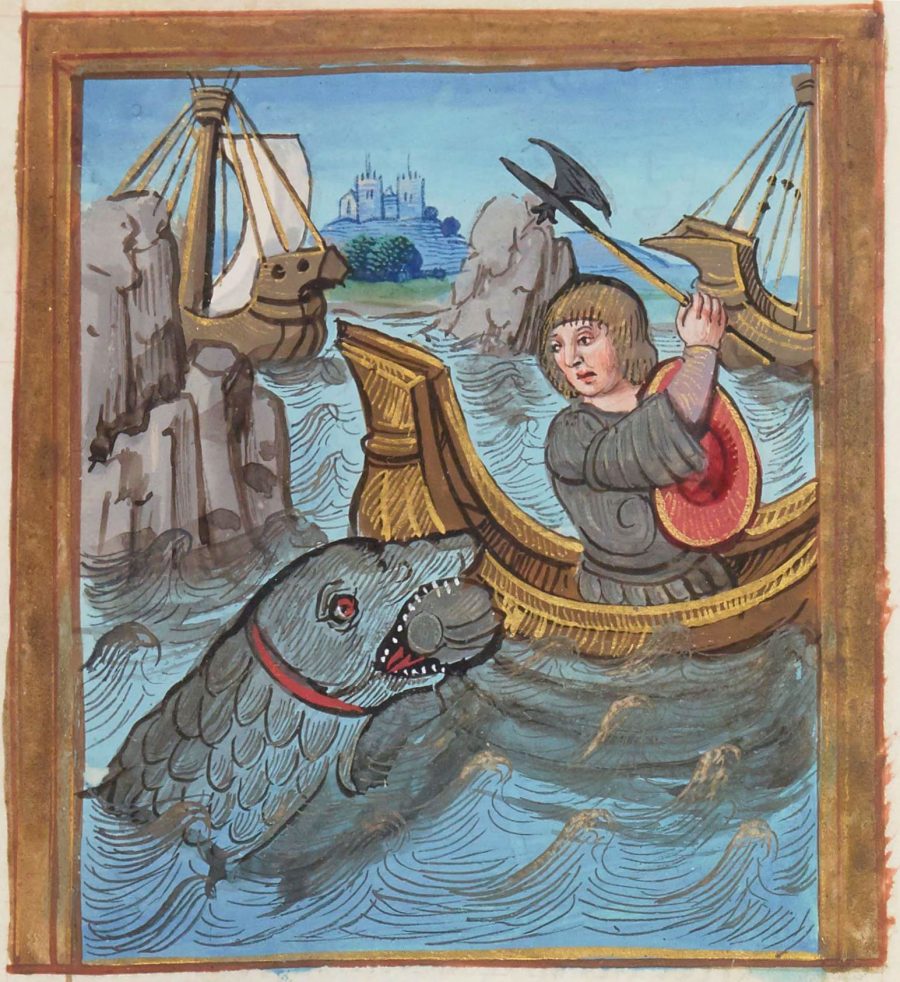 An illustration on parchment from the 16th-century epic poem History and True Novel of the Duke of Lyon de Bourges shows the story’s hero fighting off a shark. Photo by Bibliothèque national de France

Despite these efforts to rationally study and observe sharks, in the years leading up to the Enlightenment, science and accurate depictions fell by the wayside. The Middle Ages were a dark period for the knowledge of sharks and science in general, says Bottaro. Superstition seemed to take over from the more studied approach taken by Pliny and Aristotle, and sharks were depicted as sea monsters or devils.

The 16th-century French epic poem translated roughly to History and True Novel of the Duke of Lyon de Bourges describes an episode in which crusader Olivier de Bourges is held up on his maritime journey toward the Holy Land by a “devil” in the sea. An accompanying illustration shows de Bourges about to hack into a sharkish-looking devil from a rather improbable-looking boat with a halberd. The creature, red-eyed with giant scales and a collar, already has its ignoble teeth on the heroic de Bourges’s helmet. 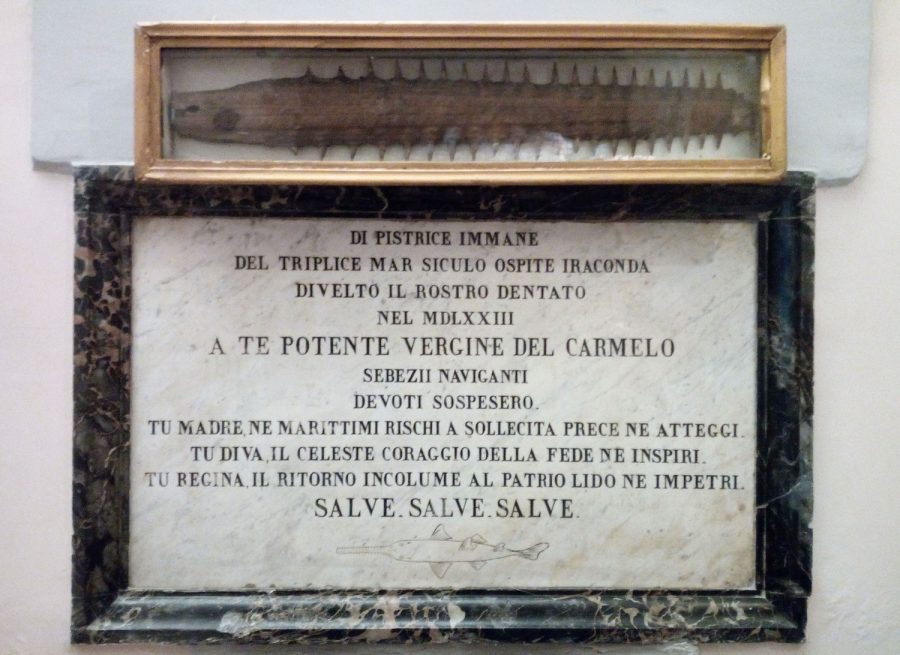 The rostrum of a sawfish affixed to the wall in the church of Santa Maria del Carmine in Naples, Italy, is revered for supposedly saving the crew of a 16th-century ship crossing the Mediterranean Sea. Photo by Andrea Travaglini

Humans’ relationship with sharks moved from superstitious to miraculous in one case the authors recount in their research. In 1573, an Italian ship traveling between Naples and Sicily was caught in a storm and began taking on water. Fearing imminent death, the legend goes, the crew prayed to the Virgin of Carmine for salvation, and the virgin responded. The storm promptly ended and the ship made it safely to land, where the crew discovered a large sawfish, a type of shark-like ray, stuck in a crack in the ship that had been letting in water. The sawfish didn’t enjoy the same fortune, as the sailors cut off its serrated rostrum and donated it to the Santa Maria del Carmine church in Naples as a votive offering, according to Bottaro.

The long, spiky rostrum is still revered in the church today as a symbol of an ancient miracle and has also fueled an ongoing debate among ecologists. Sawfish are not found in the region, but the story behind the relic seems to suggest they were once there. “If this rostrum was of a species [living] close to the Mediterranean Sea, it would be the first proof of the possible presence,” Bottaro says, adding that they are conducting work, including genetic analysis, to confirm the origin of the specimen.

Even if the sawfish wasn’t a resident of the Mediterranean, Bond says the relic’s existence could still reveal new information about trade routes at the time, considering the species would likely have come from southern Asia.

Tony Pitcher, a fisheries professor at the University of British Columbia who has been looking at the history of fisheries for years, says studies like those of Bottaro and his colleagues give more profile to the value of historical ecology to researchers.

“[The study] has utility in terms of understanding what we have lost and what we should really be seeking to restore,” he says.

As the artistic renderings and stories have accumulated through the centuries, shark numbers have dwindled. Ocean environments across the globe have taken a drastic change for the worse since the Industrial Revolution—a 2008 paper estimated that shark numbers in the Mediterranean Sea had dropped by 97 percent over the past 200 years.

“The Mediterranean has very few shark species and very few that are doing well,” Bond says. “We ecologists give it the nickname of the Deaditerranean.”

Bond says one of the biggest takeaways from these recorded interactions is the persistence of our fearmongering and how little has changed in the relationship between humans and sharks over time. But despite the ongoing challenge of convincing the public to accept the presence of these predators, a number of groups are working to improve the plight of sharks in the Mediterranean. If they succeed, future artists and writers depicting scenes of the Mediterranean in their work will have a robust ecosystem to draw on—one that includes its apex predators.