Can neuroscience tell us something about humans and their connection to water? Photo by David Pu'u/Corbis

If you are reading this magazine, there’s a good chance that you feel a special connection with water and the ocean. The sense of peace that we feel when we are in or near the ocean can be so deep that it feels fundamental to our being.

But is it fundamental to our brains? That’s the claim of Stanford neuroscientist and co-founder of the Institute for Applied Neuroscience, Kevin Weiner. He’s a proponent of Blue Mind, the recently published book by marine biologist Wallace J. Nichols, that maintains water holds a special place in our minds. Seductive as this idea might be, and as important as water is for life, there’s little definitive evidence for it.

An expert in how the brain processes vision, Weiner has been involved in several high-profile studies that uncovered interesting and previously overlooked sections of the brain that are involved in visual processing. He was also the captain of the Princeton swim team and is still an avid swimmer and surfer. He likes the notion that a brain can develop a special affinity for water and has come up with a few reasons why science might support that idea.

Weiner shared some of his thoughts with Hakai Magazine.

Erik Vance: You study visual perception in the brain. Why is that important for science?

Kevin Weiner: Vision and perception come pretty effortlessly for people. You can categorize an image in one-tenth of a second. Yet most people don’t know that there is a whole cascade of dozens of visual areas [in the brain] that are actually allowing them to perceive their world that quickly. And so understanding all those transformations from area to area that allow that speed is really important. Visual neuroscience is one of the oldest fields in neuroscience and yet we still don’t know how that happens.

EV: So is there something special about how humans perceive natural scenes?

KW: There are focal networks [in the visual cortex at the back of the brain] that light up when someone views faces and then there are other networks that light up when people are viewing natural scenes. How and why, people are still debating. In terms of bits of information or which one is more important to the brain, [scientists] don’t know that yet.

The warm colors in this image of neuroscientist Kevin Weiner’s brain show where the brain activates when viewing visual scenes (in the occipital and temporal lobes toward the back of the brain). Image courtesy of Kevin Weiner

EV: So then there are parts of your brain that code for scenes? Scenes are somehow special?

KW: It’s scenes, faces, bodies, and words. Those are the main things that have been examined in the high-level visual cortex and that seem to have specialized little bits.

EV: And when your brain looks at a scene, it’s different than when it looks at a face.

KW: When you are looking at a scene you are not always looking at the details, you are attending to the whole scene and a lot of the stuff in the periphery matters. But if I am going to look at your face, I’m more likely to discriminate the details. So these little regions in the brain that code for faces actually overlap with maps in your brain that prefer stuff in the center [of your field of vision], while those that code for scenes prefer stuff in the periphery.

EV: So then what’s so special about natural settings as opposed to that building over there?

KW: Present research shows that it’s not the places, it’s the spaces. It’s really about the different features that compose the scene. So it’s not necessarily that it’s a “beachscape” or a “mountainscape,” but [it] is how the scene is constructed that’s coded in the visual system. Obviously for buildings you have these rectilinear representations with sharp, angled lines.

EV: So our brains have a special way of recognizing scenes. But that doesn’t mean that water is particularly special. Isn’t it just that you like water so much and thus you start to see it as important in the brain?

KW: That type of expertise, and your ability to discriminate where the little nooks and crannies are to put your hands, that would also be incorporated into your brain somewhere. It is evolutionarily advantageous to understand where the water is, what it looks like, if it’s safe.

EV: You are talking about “expertise” effects, right? How would that tie into an ocean-focused brain?

KW: Expertise effect, at least in visual neuroscience, basically is having some skill that other people don’t necessarily have. So in the case of car experts, they know the exact type, make, year, model of cars that most people wouldn’t know; they attend to all those fine-grained details.

EV: So it’s not that everyone has a blue mind, it’s that certain people can create a blue mind—a mind that is specially honed for water.

KW: Maybe. I’ve been swimming competitively since I was four years old, captain of my Division One swim team. In meetings, [colleagues] will actually say, have you been in the water today? Why don’t you go swim and come back and we’ll continue with the meeting? For me, based off the extensive experience of hours of staring at a black line in the pool, it gives me a sense of clarity of thought, clarity of reasoning. That resonates with me. Because of your expertise with climbing and being in the mountains I think that your [scene] areas would have different representations than my scene areas. You have a different expertise. 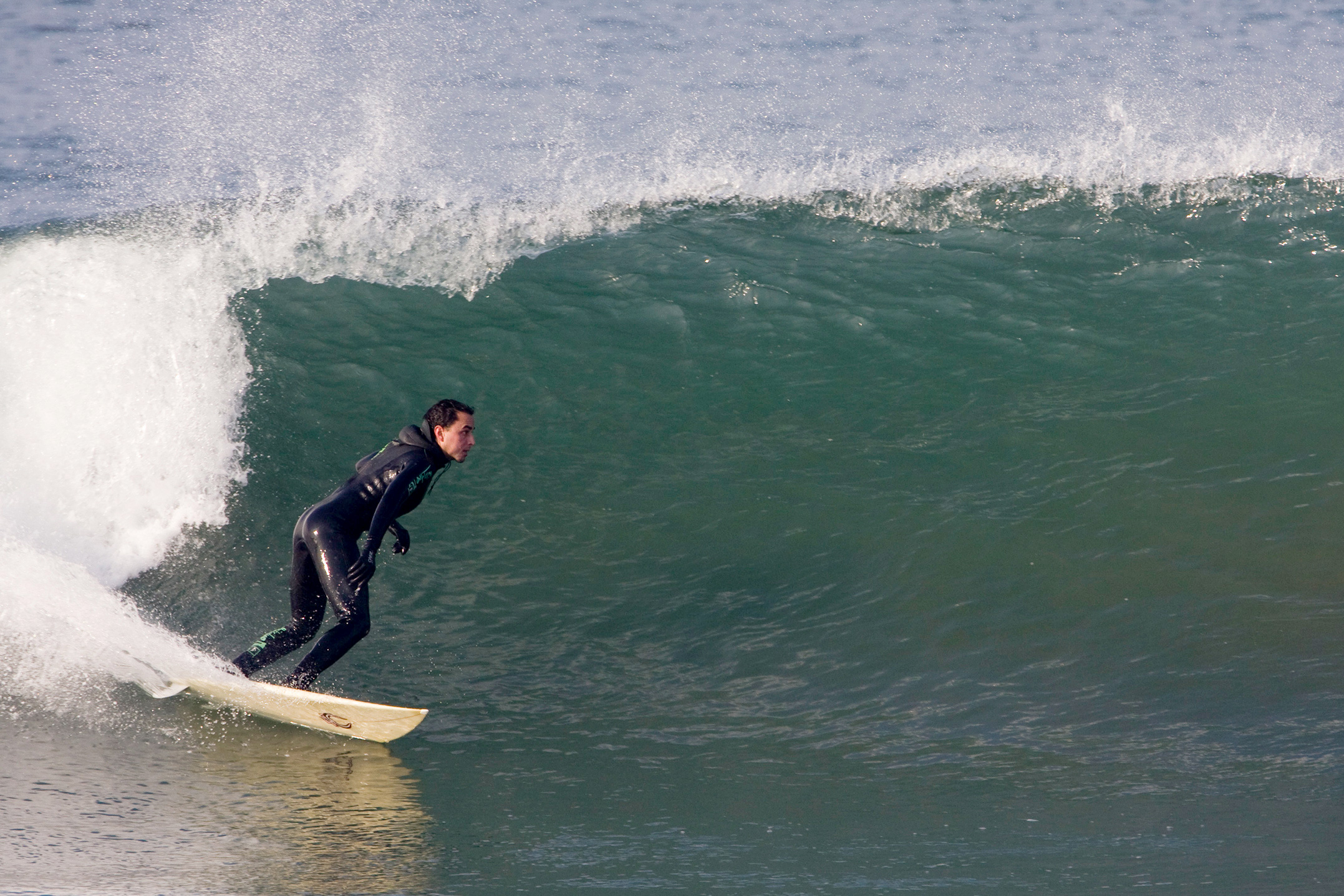 Stanford University neuroscientist and surfer Kevin Weiner studies how the brain processes vision. Our brains react in a specific way to natural scenes, such as seascapes. Photo by Skip Hoard

EV: So what does that mean for individuals? For health? For happiness? Besides the fact that you need to go swimming a lot.

KW: (laughing) Oh, I just actually got out of the pool before I came here! I think knowing what you need to stay healthy and happy, especially from a mental standpoint, is important. For your readers in particular, they are probably going to read this magazine because they love being near the coast or in and around water. So I think your readers already know they have this connection.

EV: So if my buddy really just doesn’t think oceans are all that interesting, he shouldn’t feel bad about himself as a human being.

KW: No, not at all. I don’t think everyone needs to have that same feeling that I do, when I’m drawn to the ocean—where it really calls to me. Because they have other things. I have plenty of friends who spend hours and hours and hours looking at waves from all around the world. I’m pretty sure if I took 10 surfers and put them in a brain scanner while they did water-related tasks, I would find expertise effects in scene-selective areas in their brains that I would not see in 10 non-experts. But that’s not to say it’s specific to water. If I did the same with 10 chess players and used chess-related tasks, I might find similar differences between experts and non-experts.

EV: But waves for those people would have some sort of visual “specialness.”

KW: Yes, categorization, specialization, those are the words we use. Just think about how long you spend in your favorite place, whether it’s in the mountains or whatever. And for me, doing double workouts for a decade while I was training, I would spend between three and four hours a day in the water.

EV: But you wouldn’t want to get trapped into thinking that water is somehow special when the same thing could happen for someone else and a chessboard.

KW: Yeah, but the water itself does have that evolutionary component that chess does not have. You need water to live.