In the ocean, even tiny pieces of plastic can host microbial life. Scientists hope to use observations on how microbial communities develop to estimate how long a microplastic fragment has been floating in the ocean. Photo by Citizen of the Planet/Alamy Stock Photo

At the end of a dock in Woods Hole, Massachusetts, Erik Zettler hauls up a streaming mass of glistening green and brown sea life. Without a single errant splash on his freshly pressed khakis, he ties the whole pile to the underside of a rickety A-frame ladder serving as a temporary rack.

Somewhere, suspended within a steel, urn-shaped basket hidden underneath the thick carpet of gooey, colonizing sea squirts and sponges, there’s evidence of one of our planet’s newest ecosystems: The Plastisphere.

Zettler peels a mesh sack off the contraption and drops it to the dock like a soggy skirt. Attached to fishing line inside the basket dangles his rather unconventional bait: a few disposable forks and paddle-shaped pieces of plastic. Zettler snips fragments off the ends of each one, and drops them into jars of filtered saline water labeled for polyethylene, polypropylene, polystyrene, and polylactic acid. I hold up one of the jars: at this resolution, the beige layer of scum on the slivers are about as exciting as the dirt wedged in the grips of my shoes. I could annihilate it with one swipe of my fingernail. But well beyond the scope of my feeble vision, there’s a bustling community of Plastispherians—bacteria, protists, and perhaps teeny larvae all tripping over each other—likely packed in at more than a million individual microbes on each scummy sample.

The scientist partners with his wife, fellow microbial ecologist Linda Amaral-Zettler of the Marine Biological Laboratory, on her research into marine microplastics. More specifically, they tackle research designed to help them understand the thin layer of single-celled organisms that forms on the shards and pellets of plastic floating in the ocean—the enduring offal of humanity. 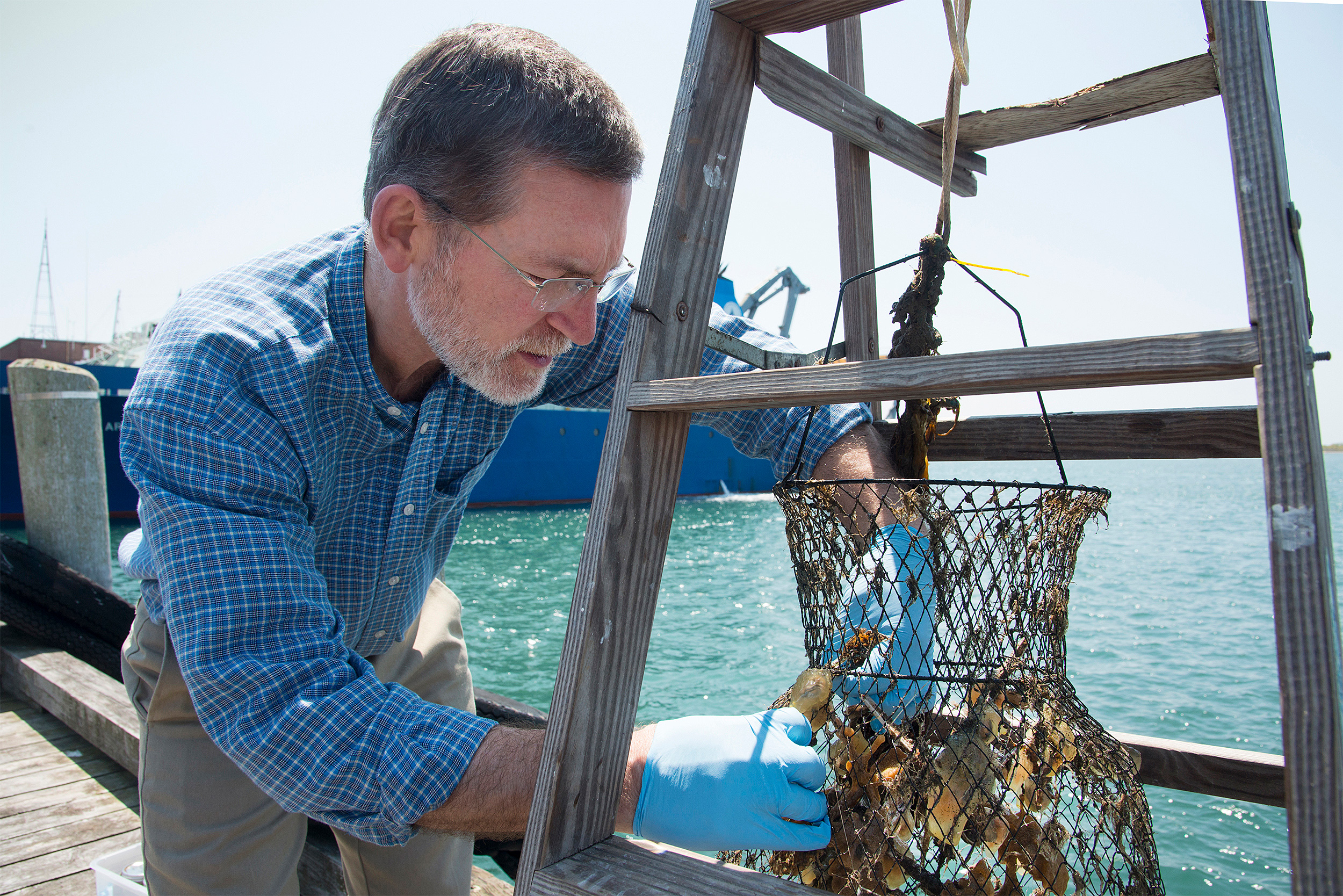 Erik Zettler clears away some sea life to access the samples of plastic that he and Linda Amaral-Zettler keep immersed in seawater to observe how microbial communities establish and develop on them over time. Photo by Shanna Baker

With this particular sopping experiment, the duo hopes to use advanced genetic analysis to both learn how the plastisphere communities develop and to use that knowledge to estimate how long a piece of microplastic (defined as smaller than five millimeters, or about the size of a pencil eraser) has been adrift. “When you pick up a piece of plastic from the ocean, we really don’t know if it’s been there three weeks, three months, three years, potentially 30 years,” says Zettler. By immersing various types of raw plastic into seawater, and then observing trends in how the microbial community establishes and changes over time, they may come up with a rough key, linking time and community development, that they could apply to the plastic shards they scoop up from the open ocean. Sort of like using hairstyles and fashion trends to approximate when an old photograph was taken.

The plastisphere “is really quite a little zoo,” Amaral-Zettler explained earlier in the morning. “If you talk to a polymer chemist, they’ll argue that, ‘Well, the crystalline structure of the outside of the plastic is such that it deters colonization of bacteria.’ But that’s not what we’re seeing.”

Plastic is as common today as coffee snobs and Trump memes, but the plastic revolution is recent history. The creation of celluloid and Bakelite—the first fully synthetic plastic—prompted a surge in plastic inventions in the 1920s and ’30s, and military demand drove up production during the Second World War. Soldiers relied on plastic parachutes, ropes, aircraft components, helmet liners, antenna housings, compasses, combs. After the fighting stopped, plastic manufacturers shifted focus to consumer goods. The public, eager for domestic comforts after a long stretch of austerity, embraced plastic, and it has been coming in waves ever since—with 322 million tonnes produced in 2015 alone. There’s so much of the stuff now that we’re all living in the plastisphere.

It was inevitable that plastic would spill into the ocean, where it can choke animals, migrate up the food chain, transport invasive species, and usher in toxins or transport potentially disease-causing microbes such as Vibrio. In places on the ocean’s surface, there are more than a million microplastics per square kilometer (though the scientists once noted a mind-boggling 10 million per square kilometer in the Pacific). With all of that new plastic real estate, microbes are living large. The extra surface area, Zettler explains, allows populations to flourish, including those species that might otherwise be rare. As microplastics accumulate a plastisphere community, they also become little hotspots of nutrients in the open ocean, an otherwise low-nutrient environment, because microbes are instrumental in cycling nitrogen, sulfur, iron, carbon, and other elements or compounds. Understanding how these drastic population shifts may be changing the larger ocean ecosystem is important, he adds. 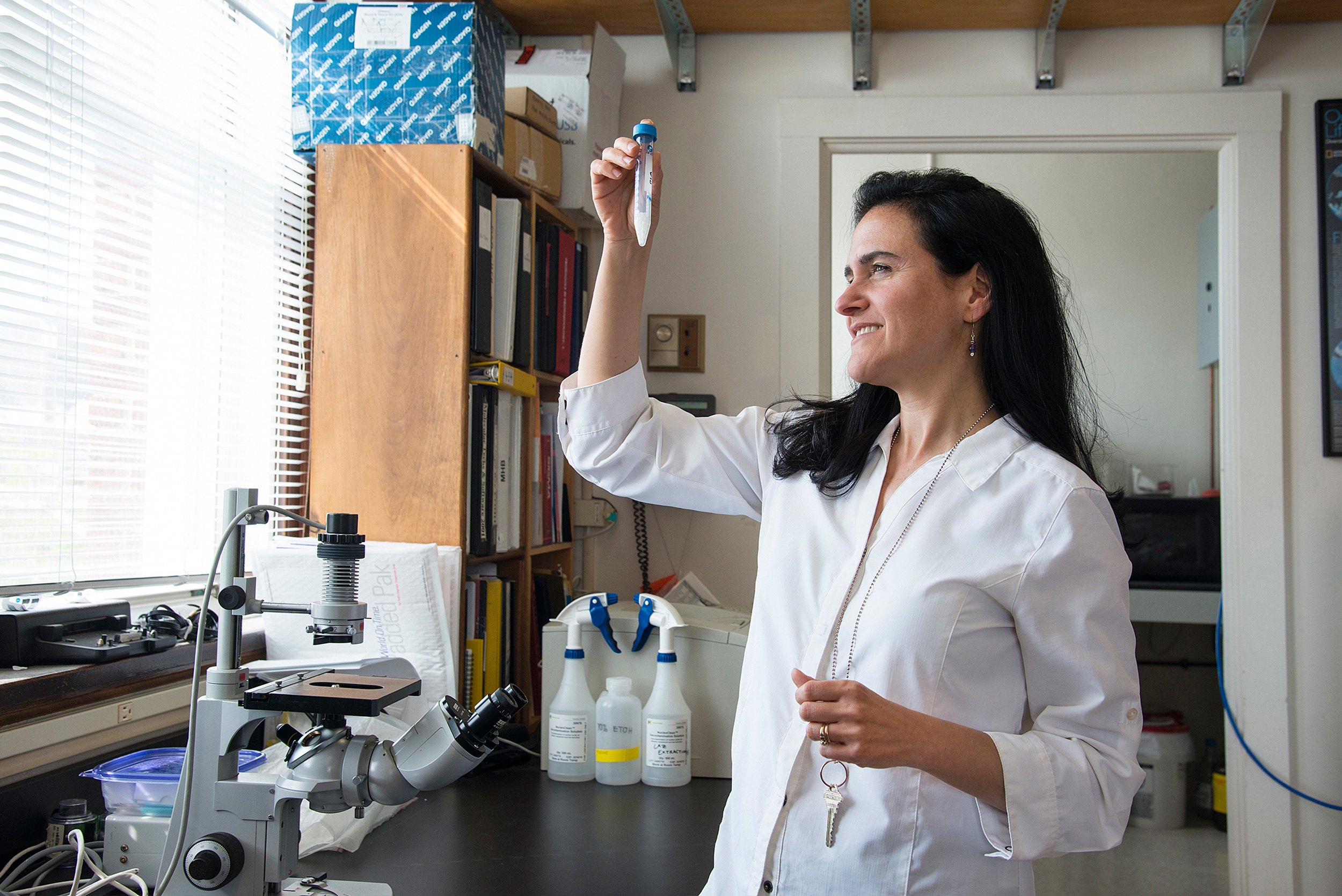 Linda Amaral-Zettler developed an interest in marine microplastics in the early 2000s while working on a global census of marine microbes. Photo by Shanna Baker

The two scientists and their colleagues are at the research equivalent of landing on the Moon for the first time. “People really want to hear about solutions: how are we going to clean the ocean?; how are we going to implement policies that are going to remediate this problem?” says Amaral-Zettler. “But they forget that in order to solve a problem, you really have to understand it first.” The couple has largely been focused on tackling “really basic ecological questions” so far, such as how the roughly 1,000-odd microbe species they’ve observed on microplastics interact, what role they play in the community, and which colonize first.

In Amaral-Zettler’s lab, in a stately brick building across the street from the dock, Zettler separates the newly harvested plastic clippings into preservative, surrounded by all the usual trappings of a scientific workspace: graduated cylinders, bottles of solution, foam boxes, totes, bottle caps, biohazard bins, vial cases, squeeze bottles, ice buckets. “The most ironic thing about studying plastics,” Zettler says, as he peels the wrapper off a syringe, “is that we use a ton of plastic.”

“I don’t think anyone in their right mind would say that we should get rid of plastics,” he adds. He rattles off a few of the industries revolutionized by plastic: medical, computing, aeronautics. It’s the single-use material that the scientists wish we would all use more judiciously. Over lunch at a café on campus, Amaral-Zettler pulls a metal utensil from her handbag. “I have my little spork.” 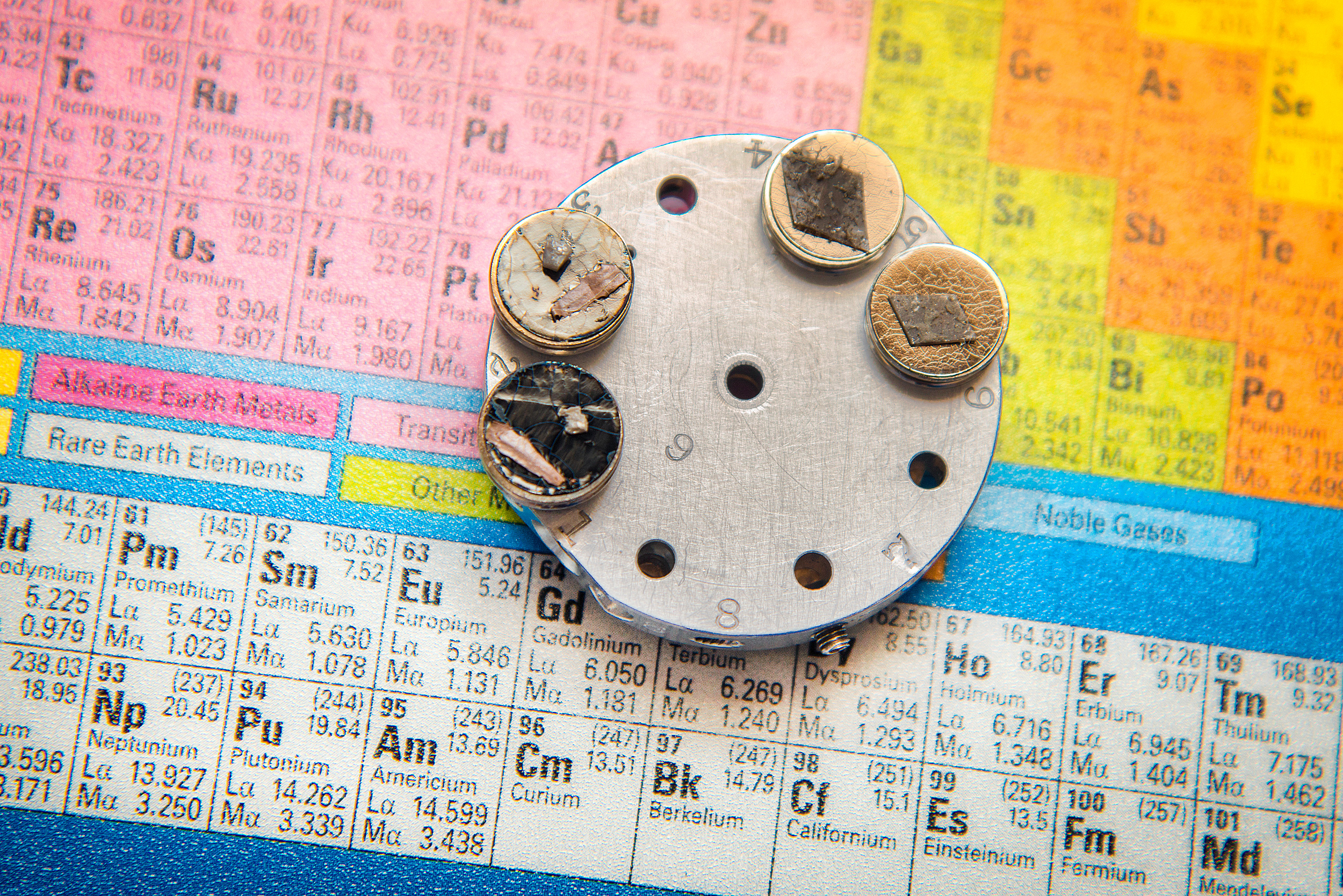 Before they’re viewed under the scanning electron microscope, samples of microplastics are dried, mounted, and coated with platinum. Photo by Shanna Baker

“Linda and I both have these,” Zettler adds. “That’s what we got each other for Christmas.”

Back at her desk, Amaral-Zettler sifts through data as Zettler leads the way to the scanning electron microscope (SEM). “Enjoy your visit to the plastisphere,” she calls after us. She manages the genomic aspects of their work, using DNA and RNA analysis to determine the type and abundance of microbes in a sample and to gather other clues about Plastispherians. Zettler’s work with microscopy adds a visual understanding of how the various types of microbes are distributed and might be interacting.

In a dark room with a soundtrack of electric hums, Zettler zooms in on the plastisphere scum—or biofilm—and a fascinating array of primitive shapes appears on screen. He tours past the crepe-like skin of a worm, something with a perfectly rendered radioactive symbol on its surface, a diatom that looks like a football stadium, small pom-poms of bacteria, and a branching species that looks like a tiny bull kelp. Everything is the color of dryer lint—coated in platinum as part of the SEM preparation—which creates the impression that we’re using Google Earth to survey the rubble of a city, post-apocalypse. 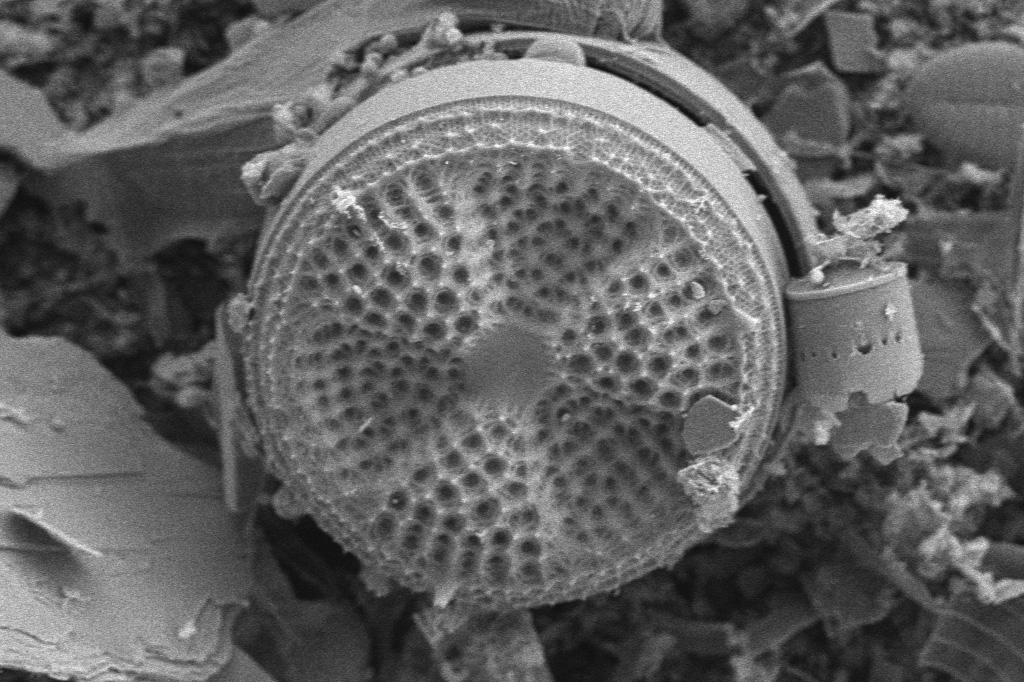 A scanning electron micrograph shows a single-celled alga attached to polyethylene that was immersed in seawater off Woods Hole, Massachusetts. Image by Erik Zettler

In 2011, during SEM visits to the plastisphere, the microbial ecologists discovered “pit formers”—microbes that appear to be creating craters on the plastic’s surface—on samples they collected from the open ocean. It was the first time pit formers had been noted on plastic from a natural environment. They believe pit formers are degrading plastic, though so far have no evidence that they’re consuming it (and Amaral-Zettler quickly notes that pit formers are definitely not the solution to the world’s plastic debris problem).

Their larger investigation into microplastics has also yielded other surprises: they’ve learned that microbial communities on microplastics are significantly different than populations in the surrounding seawater, and from one piece to the next. “I wasn’t anticipating that,” says Amaral-Zettler. “It still astounds me there hasn’t been more homogenization of communities.” They chalk that up to the fact that each piece of microplastic in the ocean could have a different life history. Where it comes from—a sewage plant or the back of a boat, for example—how much ultraviolet radiation or wave action it’s been exposed to, or whether it’s been swallowed and expelled again by an animal could all influence the microbial community. What’s more, life in the plastisphere is dynamic, with competition and predator-prey interactions, and—as on any island property—is limited by resources such as nutrients like nitrogen, phosphorous, potassium, and carbon. Which is why the goal of determining how long a piece of plastic has been in the ocean is not a straightforward equation. 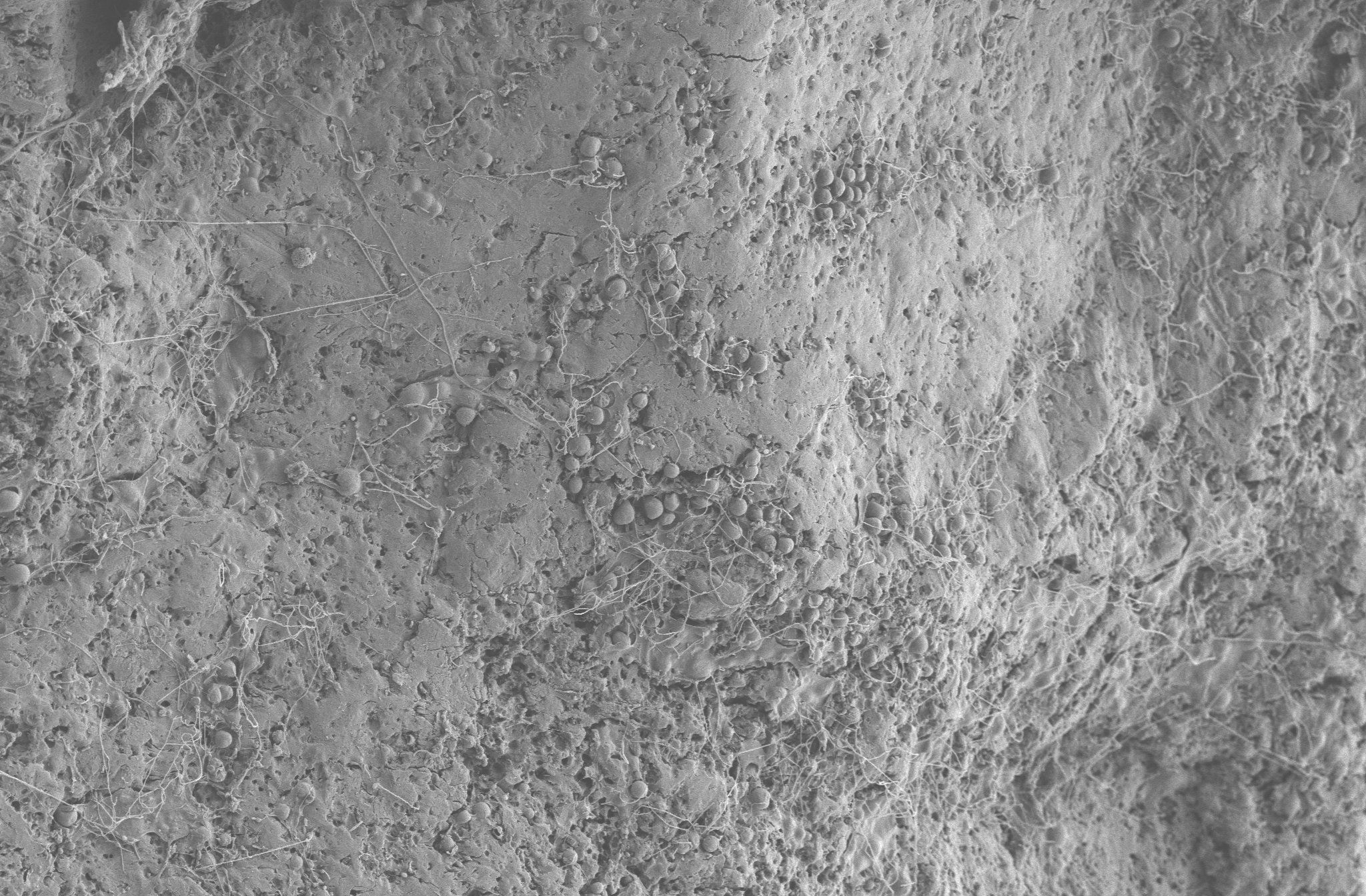 A scanning electron micrograph shows pit-forming microbes on the surface of a piece of plastic collected in the open North Atlantic. Image by Erik Zettler

Still, preliminary results from the experiment off the dock in Woods Hole—and data from colleagues in San Diego, California, and St. George’s, Grenada—show “relatively predictable” patterns in how a community establishes and then develops, particularly over the first few months, says Zettler. “So our thought is, using this kind of analysis, we might not be able to say, ‘Okay, it’s been out there three years, two months, a week, and two days,’ but we might be able to say, ‘It’s definitely been out there more than a month and less than six months.’” Having a rough idea of how long plastic has been in the water can, in turn, help them guess where a piece of plastic they find in the ocean might have traveled from. “It’s just one more piece of information,” Zettler says.

The microbial ecologists recently accepted positions in the Netherlands at the Royal Netherlands Institute for Sea Research, so plan to replicate the experiment in the North Atlantic, while another researcher takes over their work at Woods Hole.

In the lab, Zettler clicks open a window on his laptop. “I show this clip when I give public presentations,” he says. It’s a clip of the 1967 flick The Graduate. “I just want to say one word to you. Just one word,” an older man stresses to the main character. “Are you listening? Plastics. There is a great future in plastics.” With so much left to discover about the plastisphere, the scientists agree—their future will involve a lot of plastics.