Mounted hawksbill sea turtles are among the many coastal wildlife products housed at the National Wildlife Property Repository near Denver, Colorado. The critically endangered turtles are often poached from the wild for their meat, skin, and shells. Photo by Gloria Dickie

A glassy-eyed brown caiman peers out of the shadows, its agape mouth showing off dozens of tiny, sharp teeth. The rest of its scaly body is hidden by darkness. Unlike its neighbors, fashioned into stiff, ashtray-holding reincarnations of their former selves, this caiman is surprisingly lifelike. Only the soft, plastic sarcophagus it’s enclosed in betrays the fact it died long ago.

Fifteen kilometers northeast of downtown Denver, Colorado, surrounded by 60 square kilometers of wetlands and prairie where bison still roam, lies the US Fish and Wildlife Service’s National Wildlife Property Repository. Few signs mark the way to this one-of-a-kind morbid menagerie that houses roughly 1.3 million prohibited wildlife products, worth millions of dollars, collected from every port of entry around the country. No other nation has a stockpile anywhere near as big, and security is understandably tight. Heavy doors conceal the macabre collection within the nondescript, metal-sided warehouse, and staff members provide monitoring.

Here, sorted by species on blue metal shelves (for inventorial purposes, but perhaps also for a sense of post-mortem kinship), lie row upon row of caiman-skin boots, alligator purses, stuffed sea turtles, bins of coral necklaces, and what can only be described as cheesy curios. 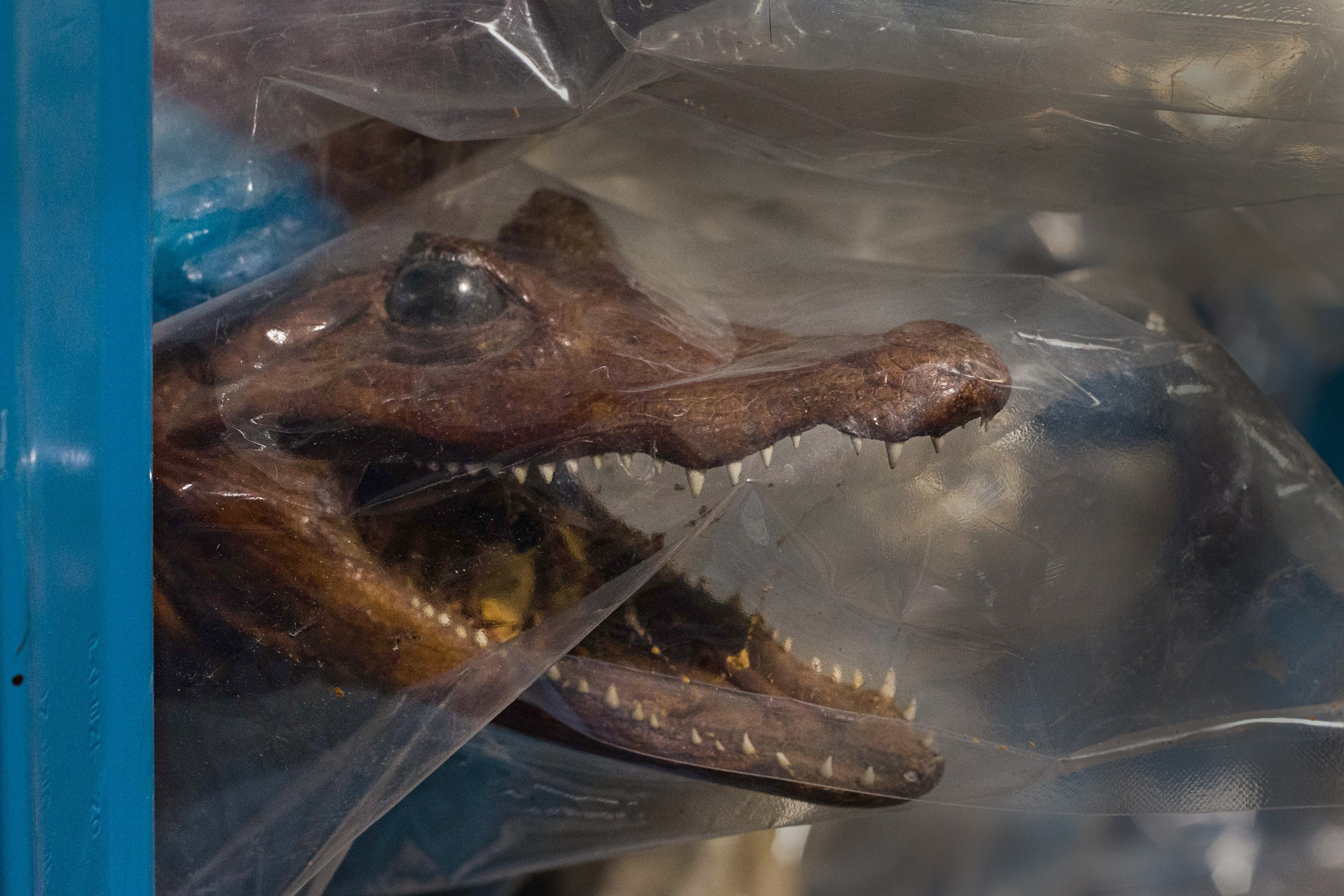 A confiscated caiman is encased in plastic at the repository. The United States is a major consumer of caiman products, which range from leather goods to curios. Photo by Gloria Dickie

“This is the final resting place of the illegal wildlife trade,” says Steve Segin, the repository’s public information officer, examining a tacky string band knickknack featuring two guitar-strumming turtles beside a drum-slapping caiman. “I heard someone say once that these animals die quietly. You need to be their voice. And that’s exactly what this facility does.”

The repository drew international attention in November 2013 when staff pulverized 5.4 tonnes of illegal elephant ivory, stockpiled since 1989, with an industrial rock-crusher. The publicized event was meant to highlight the African wildlife poaching and trafficking epidemic. The foyer of the warehouse still features a large display of illegal African wildlife items—elephant footstools, carved tusks, and musty zebra hides. Even in death, African megafauna command the most attention. The sea turtles, queen conch, and other coastal species from the Latin American region, including the Caribbean, have been put to rest at the very back, stuffed into cardboard boxes behind upright wooden pallets, where, perhaps, their voices are hardest to hear.

For years, the US government has been performing a kind of triage, deciding which foreign species at risk of extinction to direct resources to first. African mammals have, not surprisingly, received the lion’s share of help in recent years via a number of federal directives that include a near ban on the domestic commercial trade of elephant ivory. Meanwhile, the repository acts like a military morgue; while booking in the causalities, staff members sometimes get a rough idea of what’s happening in the war zone. And, in recent decades, coastal species from Latin America have been showing up en masse.

Roughly 200 new items originating from around the globe arrive at the repository every week, many from large shipments intended for commercial purposes—such as python-skin boots from South America or shahtoosh shawls made of antelope fur from Tibet. Some items are cut up and incinerated at the repository upon arrival, if space is limited. Those that make it to the warehouse’s shelves typically are either suited for educational purposes or are horrific and unique, like the mounted tiger fetus staff members pull out for visitors as a gruesome party trick. 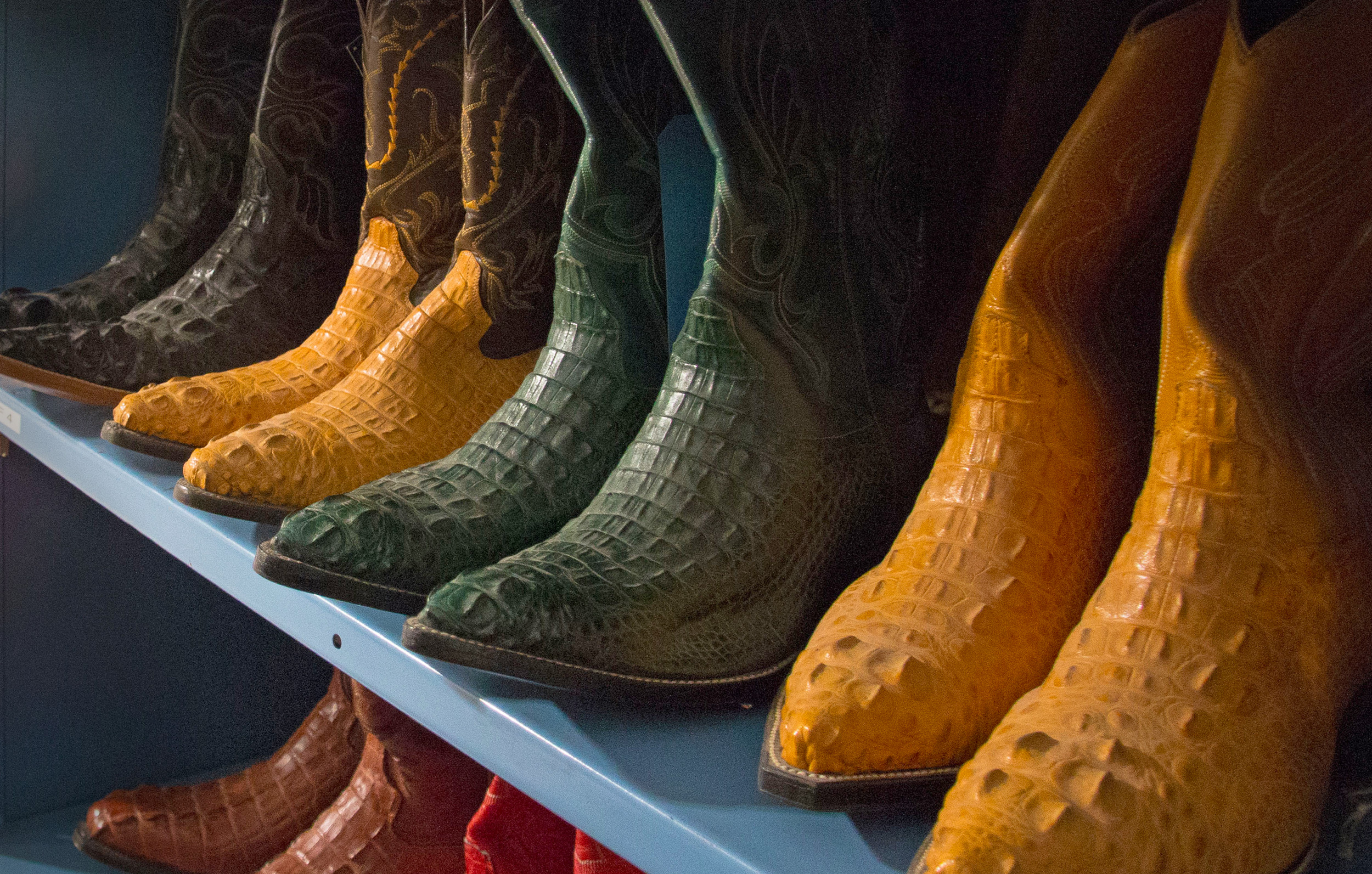 Authentic alligator-skin boots can be difficult to distinguish from fakes. Agents look for specific signs in the patterns, pockmarks, and creases to tell them apart, and may even burn the leather to see if it smells like plastic. Photo by Gloria Dickie

In recent years, smaller and smaller tusks have started arriving at the repository’s doors, signaling to workers that fewer elephants are reaching adulthood in Africa. And when Doni Sprague, a 20-year veteran repository specialist, had to turn down a seized shipment of 30 wooden pallets of queen conch shells from a port in Los Angeles, California, she received a clear message: somewhere in the world, conch trafficking was on the rise.

In fall 2015, the US nonprofit group Defenders of Wildlife published a 91-page report tracking illegal Latin American wildlife and wildlife products seized on their way into the United States—the majority of which comprise or originate from coastal species. They analyzed raw data collected by US law enforcement between 2004 and 2013. And their findings set off alarm bells. In 2013, port authorities seized 572 shipments full of illegal wildlife products originating from Latin America—well above 2012’s 381 seizures.

Not all wildlife trade is illegal; across Latin America, animals are bred in captivity for the sole purpose of exporting leathers and other luxuries internationally. Even some of the products that end up here at the repository aren’t actually forbidden; they simply arrived at a US port without the proper paperwork or permits. 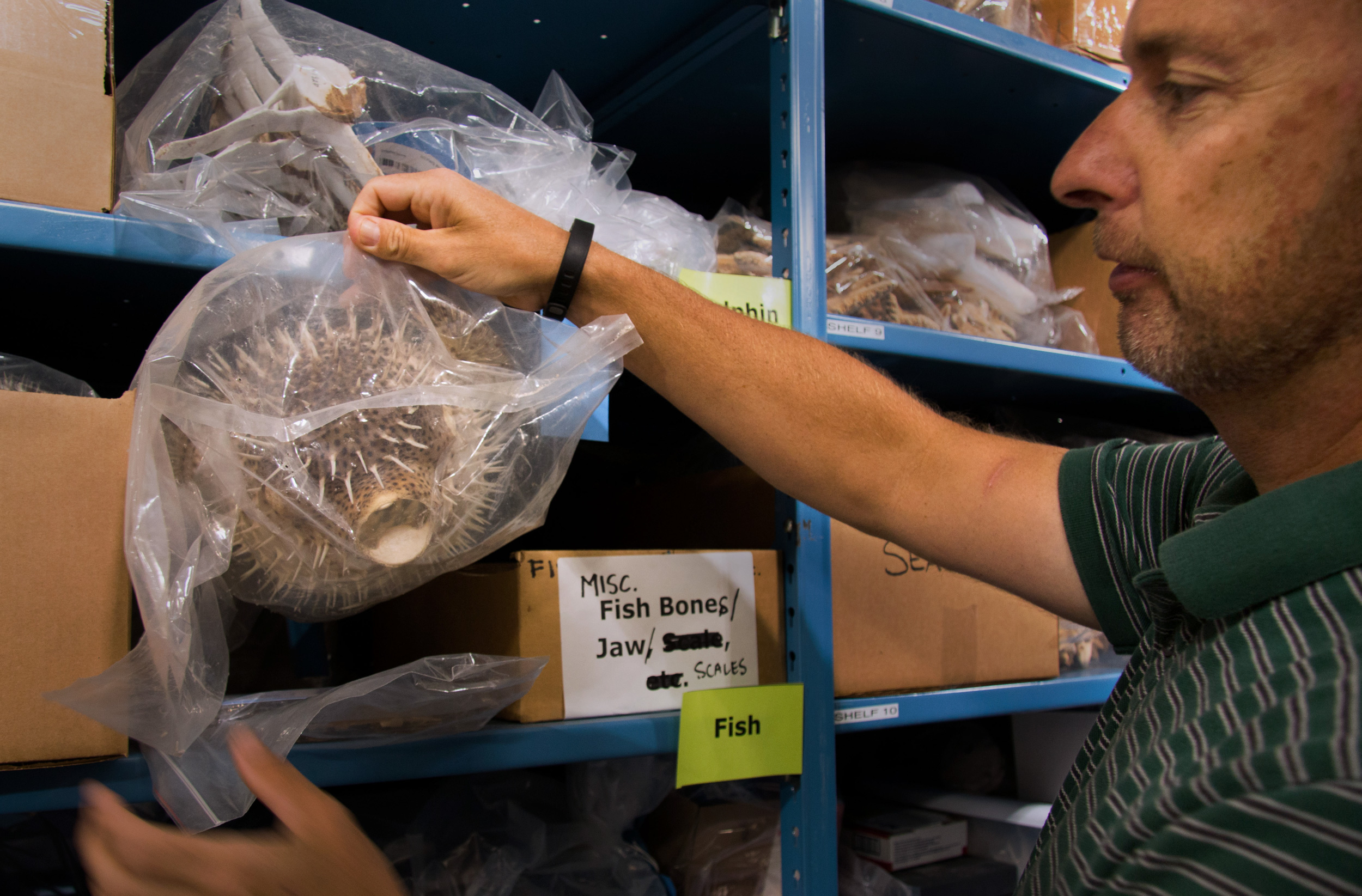 Of greater concern to wildlife inspectors are the endangered or threatened species that have been poached from the wild and smuggled through US borders. When Defenders of Wildlife dug deeper into the data—which tracked only seizures of species protected by the US Endangered Species Act and/or the overarching Convention on International Trade in Endangered Species of Wild Fauna and Flora (CITES)—they found that more than 92 percent of single-animal product shipments were of species identified as either endangered or nearly overexploited. 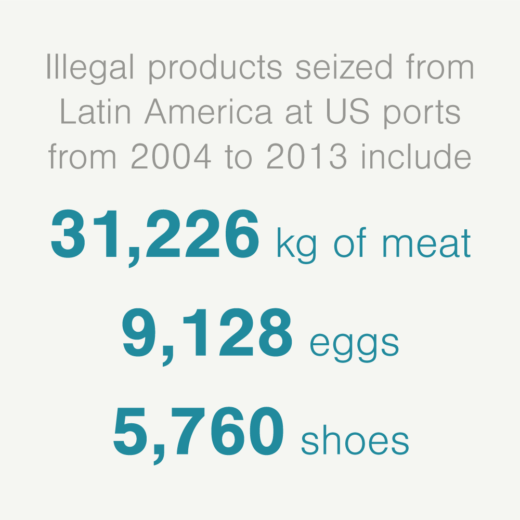 Much of the demand for the coastal species of Latin America originates from one of two human impulses: vanity or appetite. For starters, there are the tacky curios Segin abhors—googly-eyed sea turtles and strumming caimans stacked on top of each other—that must appeal to somebody’s design sensibilities. “To me, I look at it and think, ‘Why would you ever want that in your house?’” says Segin. The repository also has a tremendous treasure chest of coral and shell jewelry, most of which can only be differentiated from plastic by its high cost. And colorful rows of caiman and alligator-skin boots, belts, and bags span several shelves. While not present here in the repository due to their perishable nature, sea turtle eggs and conch meat are considered delicacies among some Latin American cultures. Agents believe that as more people from that region immigrate to the United States, their desire to satisfy their native palate is helping drive cross-border trafficking.

The Latin American region faces the same factors that make Africa so susceptible to poaching and trafficking: it’s home to many developing countries, has thousands of endemic and endangered species, and struggles with corruption and law enforcement. Yet its species have historically failed to capture the compassion of the international community. This lack of global attention is precisely what makes the region even more vulnerable to illegal activity. “Because we’re so rich in biodiversity, there’s not just one big animal that we can portray to bring attention to the others, like the big mammals in Africa,” says Alejandra Goyenechea, coauthor of the Defenders of Wildlife report. 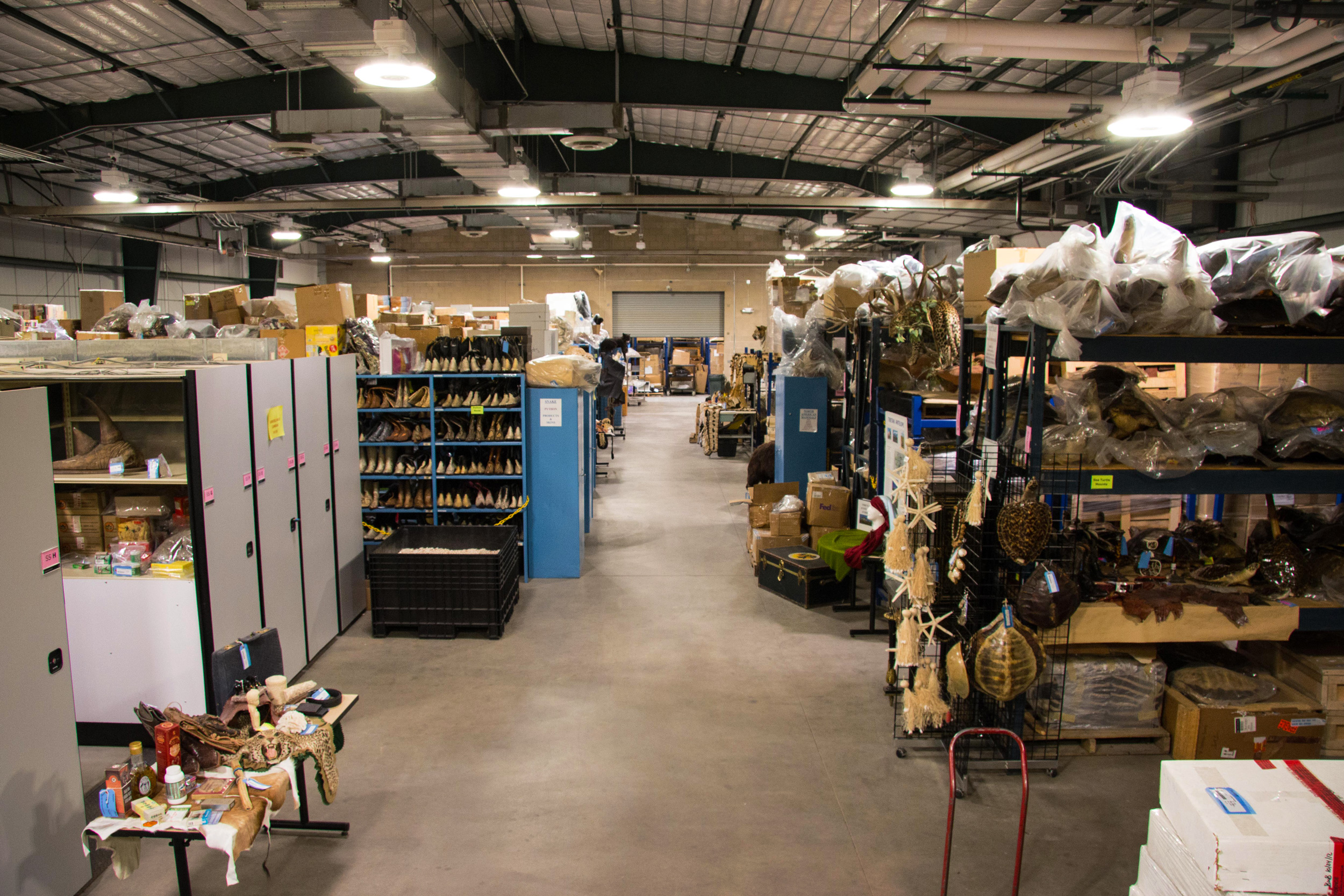 Roughly 1.3 million wildlife products originating from around the world are housed in the repository. Photo by Gloria Dickie

In October 2016, the US Fish and Wildlife Service (USFWS) announced that, as part of increased funding from former president Barack Obama’s 2013 executive order to combat the global wildlife trade, they would be hiring a special agent attaché at the US embassy in Mexico City to help dial in on what was happening with trade in the region, focusing on transnational organized smuggling. And this past summer, US senior special agent Neil Gardner traveled to Nassau, Bahamas, to gauge interest among countries for a Caribbean wildlife enforcement network that would encourage information sharing and building connections to support criminal investigations. But the voices of coastal wildlife may stay muffled—with a federal hiring freeze now in place under the Donald Trump administration, it’s unclear whether the USFWS will be able to progress in its plans to combat the illegal Latin American trade.

When CITES was enacted in 1975 to regulate global trade in wildlife, it made a noticeable difference. With the allowance of regulated ranching in select places, including South America and the Caribbean, poaching of crocodilian and alligator populations declined. Poaching of southern white rhinos in South Africa also temporarily reached sustainable levels in the mid-1990s, largely due to CITES. But policy experts and conservationists have had a hard time drawing any finite, large-scale conclusions about what’s happening with poaching and trade in Latin America. Because of the Defenders of Wildlife report, we now know that the most common species from that region confiscated at US ports are queen conch, sea turtles, common caimans, crocodiles, and iguanas. We know that the United Nations Office on Drugs and Crime designated Latin America as a priority in the fight against wildlife crime. But much more remains unknown. Even the repository staff can only form hunches about what’s happening.

As she pushes a shopping cart filled with newly arrived illegal inventory to stock through the warehouse, Sprague reflects on the popularity of coastal species. “Turtles are big, [so are] the shell and coral products. … Most of those things are coming in at a steady pace to the repository, but it’s hard to say how much overall [is trafficked into the country].”

Special agent Gardner notes that unlike the clearly defined and established trade routes that exist from West Africa to Asia and the United States, the routes from Latin America are numerous and complicated and involve multiple modes of transportation. That makes trade from Latin America harder to monitor and control. 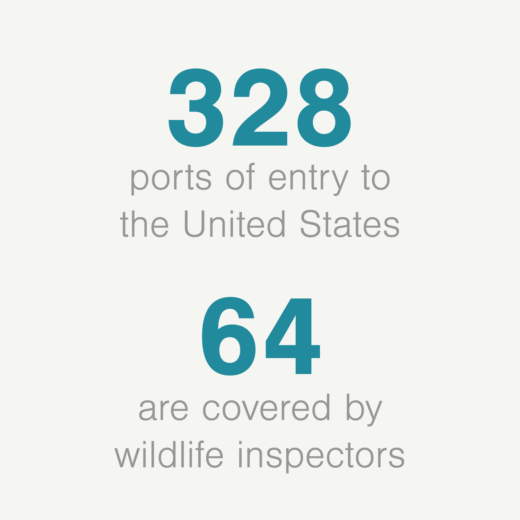 Ask repository staff if they suspect poaching and trafficking of coastal species is increasing in Latin America and most will hesitate. There are just too many unknowns in the war zone to draw clear conclusions. Goyenechea similarly wavers back and forth before saying quantities have probably been consistent over the past 10 years. Increased US seizures could be a result of people poaching and shipping more wild animals—or the positive result of the few dozen additional wildlife inspectors working at US ports since 2004. The 2015 Defenders of Wildlife report indicates sea turtle seizures are decreasing. But Goyenechea says it remains unclear if that’s because governmental efforts have curbed poaching, or if, like elephants, there are just fewer sea turtles in the wild.

Rather than draw conclusions about the global trade writ large, staff at the repository focus on making the facility a place of learning, not a tomb. School groups are welcome to tour the warehouse and peruse the haunting taxidermic creations. Demonstrations like the ivory crush take the public information campaign a step further. Some pieces are loaned out for airport awareness displays to help educate tourists who might be tempted to bring strumming turtles home as souvenirs. And nonprofit groups frequently film public service announcements about trafficking among the vast collection.

As Sprague continues along the aisles, she glances down at the mounted scorpions and black caiman boots from Mexico in her shopping cart and sighs. “Just as soon as we see a decline in one product, we see an increase in something else.”