On a remote, rainy island off the coast of Madagascar, 17th-century sailors carved a now-faint message for others in rock. Photo by Mark E. Polzer

As humans, we seem to have an innate desire to connect with others when journeying far from home, sharing both our information and experiences. In the snowy expanses of the Arctic, the Inuit constructed human-shaped inukshuks of stone to communicate information on travel routes. In the Australian outback, early indigenous travelers created songs that recorded vital details about the location of waterholes and other important geography. But how did early seafarers pass on messages to others, particularly during the long, lonely voyages of the Renaissance, when European sailors journeyed for months at a time through dangerous and often uncharted waters?

At Flinders University in Australia, maritime archaeologist Wendy van Duivenvoorde has been looking into this question. She has been studying postal stones. Some 400 years ago, she says, European sailors exploring and plying trade routes to and from Asia created an enduring messaging system, carving inscriptions on coastal rocks with a hammer and chisel whenever they stopped to replenish supplies or fresh water, repair the ship, or air out their sick shipmates. On occasion, some wrapped official letters in waterproof coverings such as canvas and tar, sealed them in lead envelopes, then tucked them into shallow holes at the base of the rocks. The inscribed messages, intended for their countrymen, included their arrival and departure dates, ship names, and sometimes the names of senior officers.

Succinct as the inscriptions generally were, they became vital links to home. If a ship wrecked—or, worse still, sank—a postal stone could provide clues about the last port of call or anchoring place. From there, investigators could reconstruct the last voyage and get an idea of where the ship may have gone down. Today, maritime archaeologists regard these rock writings as an important source of information on 17th-century ship life. Postal stones, says van Duivenvoorde, “are the embodiment of where these ships were.” They show “how we try to communicate when we’re far from home,” she adds.

The Dutch-born archaeologist found references to this messaging system while studying life aboard ships belonging to the Dutch East India Company. In the 17th century, the company dispatched cargo ships to Asia to conduct a thriving trade in such valuable commodities as spices, Chinese porcelain, and Indian cloth. About 20 ships per year made the eight-month journey from the Netherlands to Asia, traveling at 13 kilometers per hour and stopping along the way at company-owned trading posts to restock provisions. When the ships were fully laden with Asian cargo, they turned around and headed home.

Conditions aboard the ships were crowded and discipline harsh—and the vessels were subject to the perils of war. The 1650s saw the first of several Anglo-Dutch wars, when the English and Dutch seized and sank each other’s ships—and sometimes Portuguese vessels also embroiled in the political conflict—with great regularity. During the First and Second Anglo-Dutch Wars, the English captured some 1,500 Dutch ships.

Van Duivenvoorde had read about the practice of leaving postal stones, but she had never seen one in situ. In 2008, however, an Australian colleague was relocating to the African island nation of Madagascar, and van Duivenvoorde casually flipped through the Lonely Planet travel guide for the country. There, to her amazement, was a reference to an island off the coast of Madagascar littered with postal stones, some inscribed by Dutch crews. Nosy Mangabe, she read, was “a thickly forested and mountainous tropical island, with huge, soaring canarium trees arising from flying buttress roots, a rusty shipwreck piercing one side.” And the Plage des Hollandais, noted the guide, was “a beach with rocks bearing the scratched names of some 17th-century Dutch sailors.” 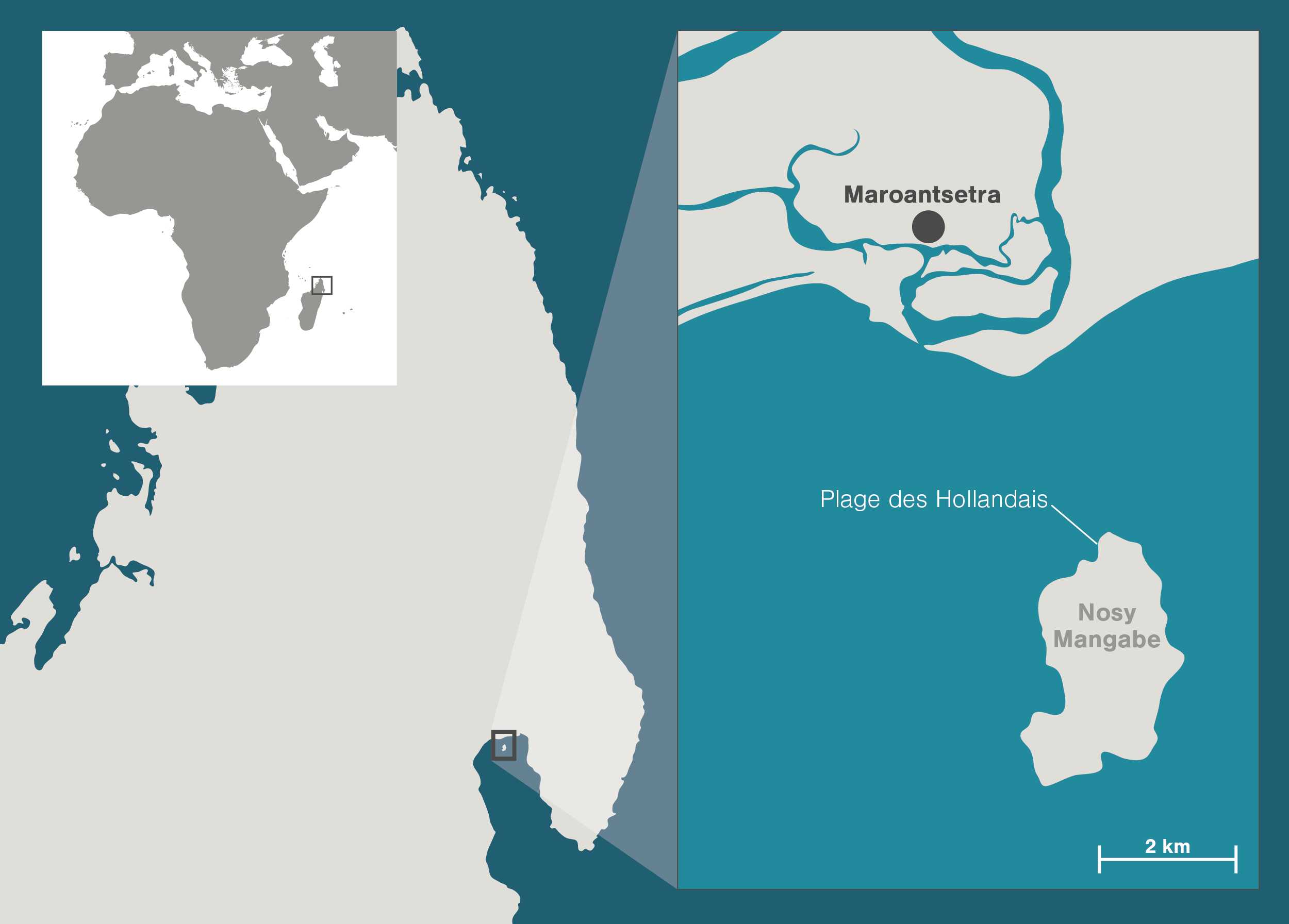 To learn more, van Duivenvoorde began searching the scientific literature for published accounts. Nosy Mangabe, she discovered, is an uninhabited, humid island in the Bay of Antongil, with fresh water always available and frequently running down its cliffs. It rains there more than 290 days of the year. All that potable water proved attractive to passing ships, but the constant rain also helped erode the postal stones, making them less easy to read by the early 20th century.

But in the early 1920s, a certain Eugène-Jean Drouhard, a French colonial official whose duties were described as “inspector of waters and forests,” managed to read some of Nosy Mangabe’s stones. Drouhard did this in a clever way, says van Duivenvoorde. He asked his Madagascan assistants to paint in white all the grooves of the inscriptions they could see. These assistants couldn’t read Dutch, so they were unlikely to “see” letters that fit a Dutch word, but weren’t really there. In this way, Drouhard managed to publish 12 of the inscriptions.

Intrigued by Drouhard’s work, van Duivenvoorde decided to travel to Nosy Mangabe in April 2012, with two colleagues—research associate Mark Polzer and PhD candidate Jane Fyfe—to see if they could learn more. Heading out into the pouring rain from their hotel in Maroantsetra, where the roof was leaking, the trio and a guide boarded a small boat for the Plage des Hollandais—only properly a beach during low tide. It was the beginning of a soggy but thrilling few weeks.

Van Duivenvoorde and her colleagues hoped to find the dozen or so inscriptions mentioned in Drouhard’s paper. Instead they located and recorded more than 40 inscriptions left by at least 13 different ships between 1601 and 1657. Their guide’s keen eyesight, honed from years of spotting local wildlife, was responsible for finding many of the more subtle markings. One stone even told the story of a leaky ship abandoned in front of the beach in 1604: remarkably, the skeleton of that ship’s hull lies underwater, close to shore, to this day. 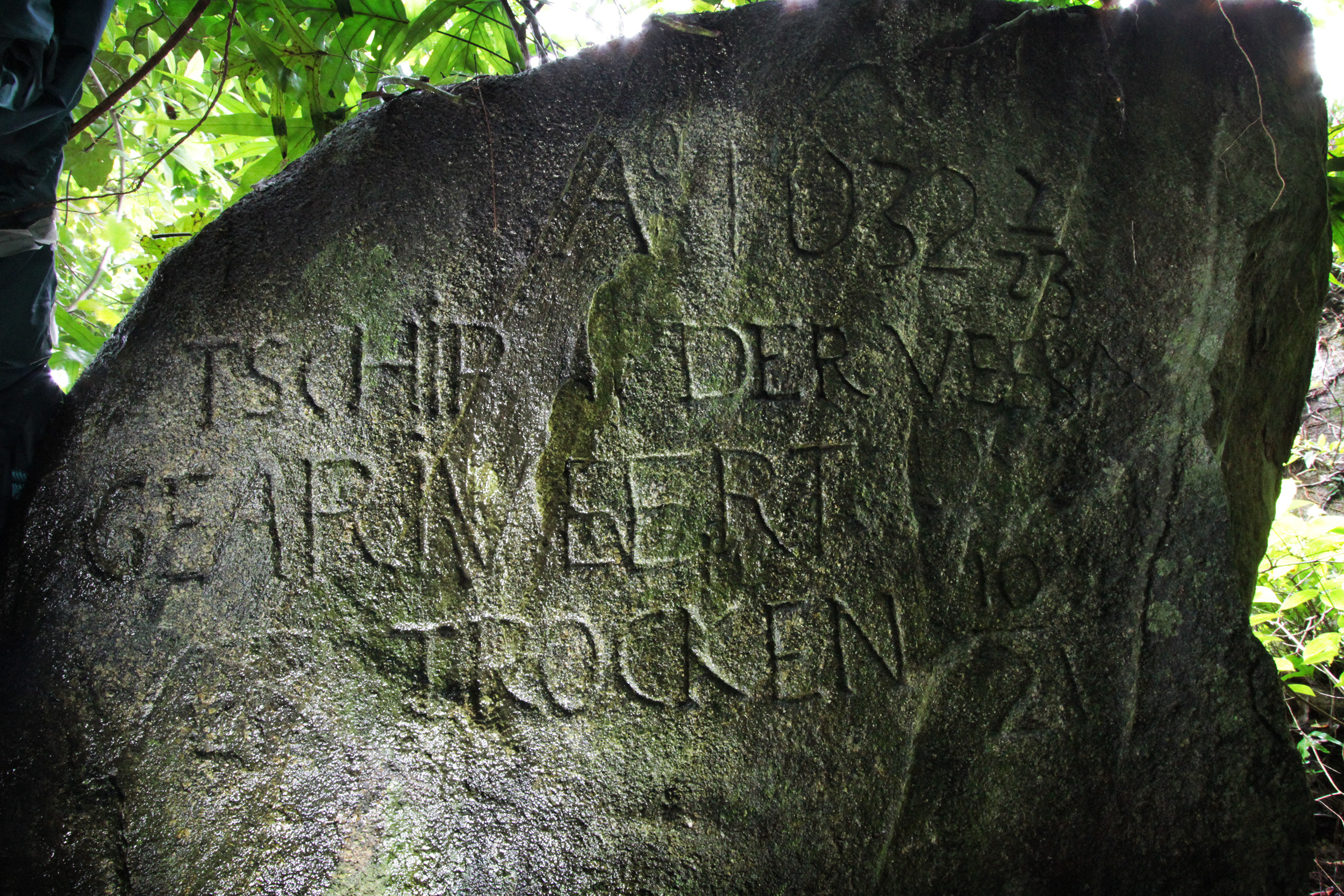 One important inscription came from senior officers aboard the Middelburg, a Dutch East India Company ship that had lost all its masts and sails in a cyclone. Just how the captain managed to sail the vessel safely to Plage des Hollandais is unknown, but the crew remained on the remote island for six and a half months to make the necessary repairs. The Middelburg’s postal stone was left by two men—skipper Jan Willemszoon van Dijck, who took charge of all nautical matters aboard the ship, and Adriaen van der Eyck, the official responsible for the ship’s trade and profitability. Their inscription reads, in translation, as follows:

Van Duivenvoorde says that once the Middelburg crew had finished building a new mast—either from timber felled in the island’s forest or from spare materials carried aboard—the ship continued its voyage back to the Netherlands. En route, it stopped at Table Bay, South Africa, to deliver a parcel of crew letters for pickup by another Dutch ship, Leiden. Those letters—now in the archives of the Dutch East India Company in The Hague—are the last surviving records of the crew and officers. None made it home. As the Middelburg passed near the island of Saint Helena in the South Atlantic, two Portuguese carracks attacked it, and the Dutch ship sank with no survivors.

Nosy Mangabe was not the only popular message center, however. Other watering stops—such as Saint Helena—were also used. But the crews did not always text on stone. The first post office in South Africa was founded in 1500, when a Portuguese sailor left a letter in a shoe that he tucked in a tree. The missive was found the following year by another Portuguese sailor en route to India. And the crew who made the first Dutch East India Company landfall in Western Australia in 1616 left their messages on a pewter plate suspended from a post. But by the late 1600s, the system of postal stones and trees was dying out: crews from rival companies had begun stealing letters from around the rocks and using the information to track the activities of their competitors. So the Dutch ships began employing locals to hold letters.

But while the practice waned, the ship’s messages remain today. They have become a testament to an age of exploration, courage, and curiosity—an age when humans left behind all that was familiar to journey to new lands. It was a time of discovery not likely to be equaled until we venture to the remote outposts of our solar system, with new messaging systems in hand.