Pravin Bagli, one of the few remaining traditional salt makers in Goa, India, works on his salt pan near the Chapora River. Photo by Glenda D’Souza

Pravin Bagli wakes at dawn and dresses carefully for work; he slips on a light cotton T-shirt and shorts, a plain white cap, and flip-flops. He wolfs down four rotis, and then scooters a kilometer to his workplace—a plot of land in the Indian state of Goa that borders a river emptying into the Arabian Sea. Tossing aside his sandals, the stocky, middle-aged man with skin burnished bronze from the sun clasps a long rake and ambles along narrow clay ridges crisscrossing the land. Nearby, red-wattled lapwings skitter and hop. Bagli stops at a small section of bubbling white brine and dips his rake, alternately pushing and pulling, sweating as he works and the temperature climbs. The breeze coming off the Chapora River offers little relief. For a quarter of a century, six months a year, Bagli has followed this routine, the routine of a mittkaar—a traditional salt maker.

At 42, Bagli is one of the youngest mittkaars in the village of Agarvado, an ancient salt-producing center in northern Goa. Agarvado means “village of salt pans”; until roughly 15 years ago, most families depended on salt making as their core source of income, followed by agriculture. A decade ago, the village had 12 working salt pans. Today, it has only four in operation, each a few hectares in size.

The industrialization of salt—India is the world’s third-largest salt producer—and the rise of fine table salt have led to a decline in the number of Goa’s traditional salt makers. The implications are many—for people and creatures, great and small, who have depended on mittkaars and their salt pans for over a millennium.

Coastal communities worldwide have traded salt for at least 4,500 years. Salt, a natural preservative, allowed farmers, fishermen, and hunters to store excess food for future use. It was a crucial technology for developing civilizations. In Goa, solar salt making as a community tradition dates back 1,500 years, and little in the methodology has changed since then.

The salt pans, also called salterns, resemble a shallow ice-cube tray—writ large across the landscape—with connecting sections. Each section serves one of three roles: a reservoir tank, where seawater is pumped in from the estuary; evaporator tanks, where the water evaporates and turns saltier; and finally, crystallizer pans, where frothy salt brine forms crystals. The heat of the summertime sun makes the process possible.

In December and January, Bagli prepares the salt pans. He first drains the water and then kneads mud and clay, shaping it into raised borders with his bare hands. Harvest begins in February and ends in May, when the monsoon showers arrive. Bagli works in the same pan as his ancestors, wielding a few wooden tools just as they did. Working solo, he produces up to 3,000 kilograms of salt a year and supplements his income by growing coconuts in the greenway alongside the saltern.

Bagli sells his salt in his shop, which stands along the main road bisecting Agarvado and connecting it to the popular beaches of Morjim and Arambol. In recent years, many mittkaars have set up shops along the road, which swarms with tourists. They sell fizzy drinks, batter-fried fritters, petrol, and groceries, including fine table salt manufactured in India. Demand for the coarser traditional salt is low; it’s mostly relegated to the tasks of rinsing and cooking fish or preserving seafood by fisherfolk. 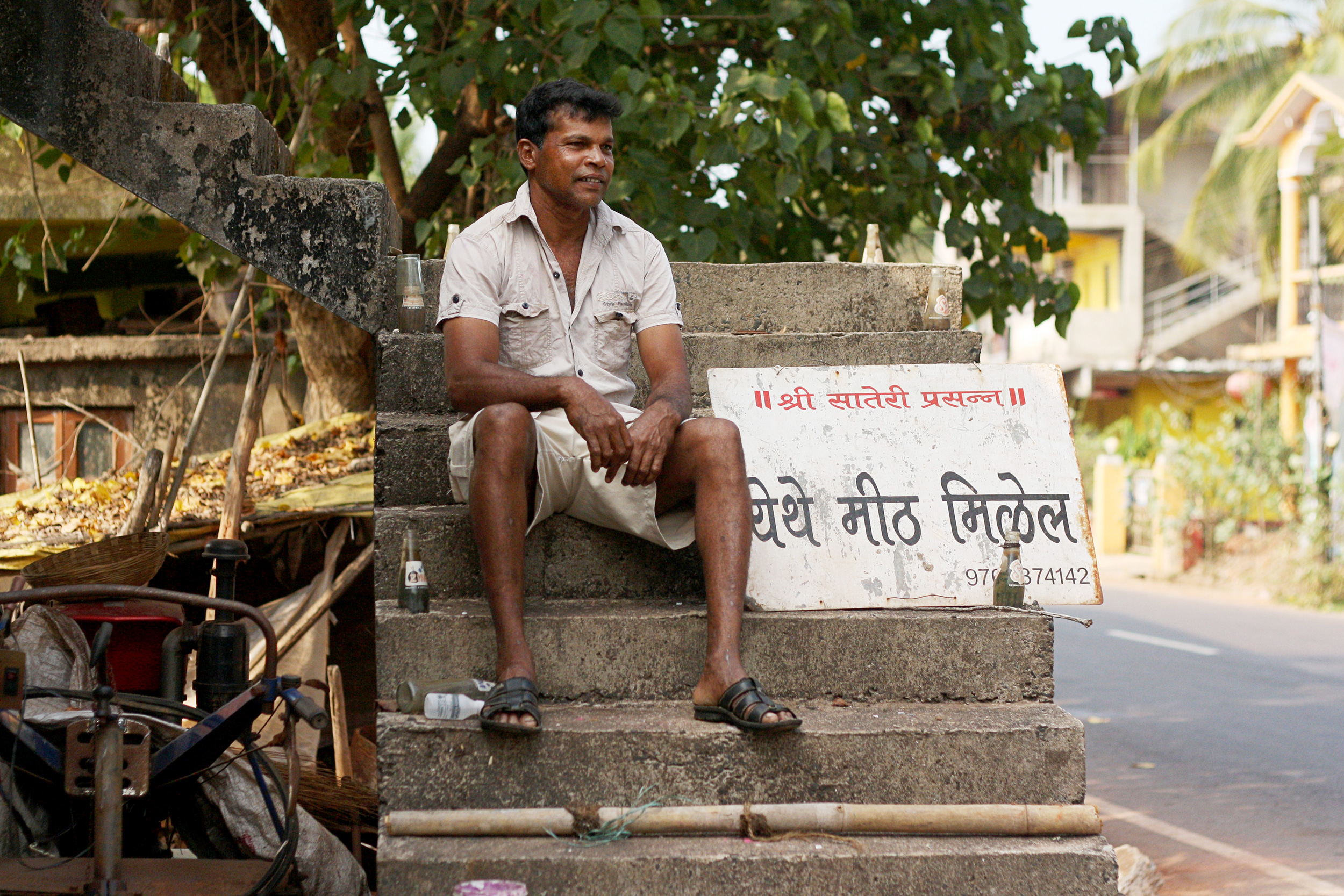 Traditional salt maker Pravin Bagli near his shop in the Indian state of Goa, a popular tourist destination. Photo by Elizabeth Soumya

Portuguese colonizers transformed Goan salt into a global commodity after they arrived in the 16th century. They exported Goan salt to other parts of India, Southeast Asia, and Africa. In 1849, Goa exported almost 19 million kilograms of salt. In the 19th century, the region had 658 salt pans; by 1965 only 200 remained. The almost fatal blow to the salt makers came in the 1990s with the World Health Organization’s warning about iodine deficiency in developing countries. The Indian government temporarily banned the sale of non-iodized edible salt in 1997 as a public health measure. But iodine deficiency disorders were most prevalent in mountainous regions in northern and northeastern India. Because the sea is a natural source of iodine, those who live in coastal regions like Goa consume enough of the mineral through a diet heavy in seafood. Scientists from Goa have also pointed out that Goan traditional salt contains adequate amounts of iodine.

Since the late 1990s, however, Goans have switched to commercial table salt. Today, only nine Goan villages, including Agarvado, have a few working salterns each. The export market is nonexistent. Almost 77 percent of India’s salt is produced in the western state of Gujarat. The large-scale industrial operations there generate table and industrial-grade salt and employ thousands of workers, who often toil in deplorable conditions.

Most Goan salterns lie abandoned, surrendered to the sea, or they’re covered with cement and sand to form foundations for hotels and other buildings—tourism has replaced salt as the backbone of the economy. The disappearing salterns interest few visitors, with one exception.

Life in the Brine

Periodically, a small group of people will shuffle along the clay borders of salterns that belong to Bagli and other mittkaars. They head straight for the brine-filled basins, the final section in the three-part salt-making process. These PhD candidates from Goa’s Birla Institute of Technology (BITS) come to look for the hard-to-see life that thrives in this extremely saline environment.

Salt contains bacteria, archaea, fungi, and organisms called halophiles, Greek for “salt loving,” explains Kabilan Mani, a BITS doctoral student. Halophiles are “extremophiles,” organisms that thrive in the most inhospitable of conditions. These super-heroic life forms flourish whether buried deep in the Antarctic ice or tucked into searing rocks under the Earth’s surface and, in the case of halophiles, in conditions too salty for other living things.

Mani and his team focus on haloarchaea, specific salt microbes that are among the oldest forms of life on Earth. So adaptable are salt-loving organisms that their tolerance of salinity, radiation, and temperature could make it possible they thrive elsewhere in the universe. If humankind finds life on Mars, it will probably be halophiles, perfectly adapted to Martian brine pools, scientists have speculated. 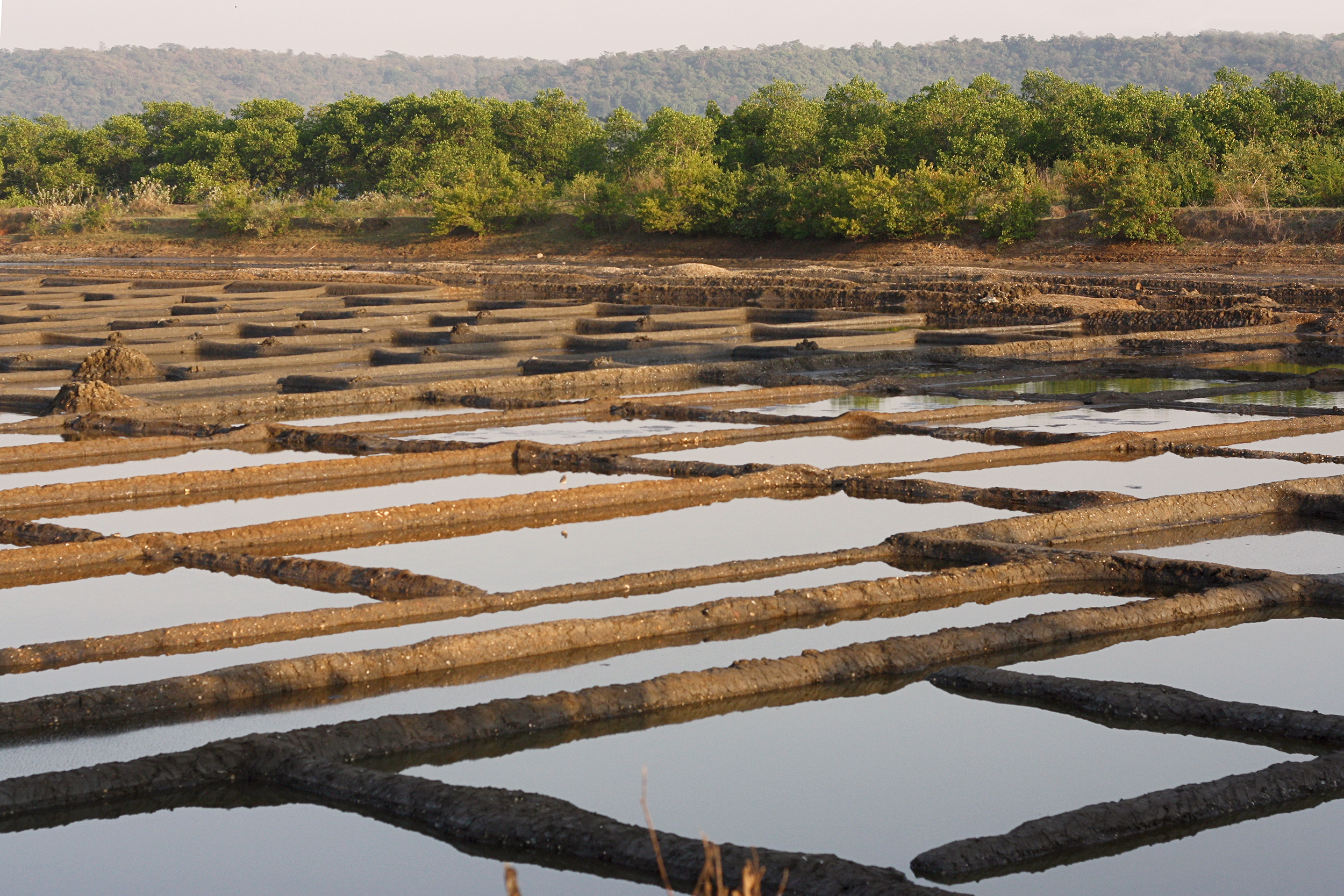 For microbiologists, salterns are also significant habitats for discovering microbes that might have new applications. Mani’s colleague, Bhakti Salagonkar, is testing salt microbes in the production of bioplastics; another colleague, Deepthi Das, scans them for enzymes useful in detergents. Other scientists in Goa study their medicinal potential as antimicrobial agents.

Fascinating as the invisible world of halophiles is, the most visible beneficiaries of this man-made environment are birds. The water surface in salt pans clouds over with green algae, a food that attracts brine shrimp, which in turn attracts fish, all of which attracts and nourishes winged visitors. Domestic and migratory birds such as plovers, terns, avocets, and storks feed in the reservoir tanks and roost in the surrounding mangroves. Salagonkar is also a keen birder; when visiting Goan salt pans, she easily spots Indian cormorants, marsh sandpipers, kingfishers, herons, and other birds.

Goa’s location on the Central Asian-Indian Flyway, an important migration route for over 150 bird species, means migratory waterfowl such as pintail ducks, northern shovelers, and woolly-necked storks stop over. Birds fly from the Arctic to summer in India and other parts of South Asia. Manufactured salt pans have hosted a diversity of avian life for millennia, with equally diverse migration routes worldwide; many species, including endangered ones, rely on Bohai Bay in China, the Bay of Cádiz in Spain, and elsewhere.

Goa’s traditional salt-making industry verges on collapse, with neither the Indian government nor the Goan state authorities offering support. As more salt makers leave the trade (mostly mittkaars on the lower end of the socioeconomic ladder), hope is hard to come by. But one elderly salt maker in Nerul, a village close to Goa’s most crowded tourist stretch of Calangute-Candolim, defies this trend. Govind Bhobe has spent over half his life committed to his salterns.

Gaunt and twiggy, 79-year-old Bhobe looks fragile, but his appearance belies an indefatigable character. He works a nine-to-five job as a lawyer and oversees his salterns in the early mornings. Bhobe has made salt every season since 1962. Over the years, with his team of seven employees, he has scaled up production from 800 bags to 5,000 bags of 75 kilograms each.

“A salt pan is a self-sustaining, eco-friendly system,” he says, adding that salt makers can earn extra income by cultivating coconut and mango trees along a salt pan’s green margins. Bhobe used to grow a variety of salt-resistant rice in the saline pans but finds it’s too labor-intensive now. Catching fish and shrimp during the monsoon season also brings income, and the algae in the reservoir tanks can be sold as fertilizer.

Salt-making communities elsewhere have made successful comebacks. Guérande, a small community off the coast of Brittany in France, is one of a handful worldwide that has revived what was once a dying occupation. Today, their handcrafted salt, “fleur de sel,” is among the world’s most expensive. The sustainable-food movement has also boosted small-scale producers. The Italy-based Slow Food Foundation for Biodiversity supports six salt-making communities, including Farim salt makers of Guinea-Bissau on Africa’s Atlantic Coast and Trapani sea salt makers from Sicily, Italy.

Developers often approach Bhobe, eager to turn his ancestral saltern into a guesthouse overlooking the scenic mangroves. And his son, a senior manager at a multinational company, wants him to slow down.

Even as Pravin Bagli contemplates giving up the trade—“It’s too much hard work; toiling in the sun isn’t easy,” he admits—Bhobe waves away any question of giving up his salt pans.

“How does one stop doing the things one loves?” he asks.

As go the mittkaars, so go two intertwined, diverse ecosystems—one biological and one cultural—and a deep bond with the natural world.

As the tangerine sun dips into the warm Arabian Sea, and the skies turn soft and relent to the water, the lonely silhouette of a man retreats from a salt pan. Bagli has wrapped up his evening shift. As he slips into his flip-flops at the end of the salt pan, his sweaty face breaks into a tired smile. “It was a hot day,” he says, “but I can see the salt crystals forming.”