Skeletons of marine mammals fill the property at Estancia Harberton, a ranch at the tip of Tierra del Fuego, Argentina, where Natalie Goodall amassed one of the world’s most significant collections of marine mammal bones. Photo by Liam Quinn

To get to the casa de huesos, the house of bones, turn off the Pan American Highway just before you reach Ushuaia, Argentina, the fin del mundo, the end of the world. Housed in a weathered white building on Estancia Harberton, one of the planet’s southernmost ranches at the tip of Tierra del Fuego, the unassuming building on an isolated acreage should have been one of the loneliest places in the world, but Natalie Prosser Goodall brought the world here. Young scientists came to study. Established scientists visited from around the world. Tourists were welcome. They came to meet Natalie and they came for the bones.

How a farm girl from Ohio came to establish one of the world’s most important collections of marine mammal skeletons, as well as her own museum, Museo Acatushún, is an unlikely story, particularly since it began in 1959, a time when it was difficult for a young woman to escape the expectation of becoming a housewife. That year, 24-year-old Natalie Prosser graduated from Kent State University with a master’s degree in botany. Not content to settle in the American Midwest, Natalie pursued adventure and secured a job teaching school in Venezuela. But she had always loved the book Uttermost Part of the Earth by Lucas Bridges, the son of British missionaries who settled in Tierra del Fuego in the late 1800s, and she was determined to visit the Bridges’ family homestead, which was still farmed by the family’s descendants. In 1962, Natalie stepped off a small plane into a clearing not far from the Bridges’ ranch. Tall, handsome Thomas Goodall, a great-nephew of Lucas Bridges’, arrived in the clearing, grabbed Natalie’s suitcase, and led her wordlessly to his jeep.

Eventually, Thomas must have started to speak since Natalie’s overnight stay turned into a weeks-long one and, eventually, marriage. These events formed her creation story. “She often said, ‘I wasn’t born here, but this is where my life began,’” says Maria Constanza Marchesi, a doctoral fellow who spent time with Goodall at the ranch.

Goodall immediately immersed herself in the environment, climbing mountains and combing beaches to gather samples of the region’s plant life. On her hikes, which she eventually shared with the couple’s two daughters, she also came across the skulls of dolphins and porpoises. Soon, she was collecting these as well. In 1966, a pair of pilot whales beached themselves near the ranch. Goodall preserved their skeletons and entered the details about them in a logbook, where she continued to catalog her finds for almost 50 years.

As Goodall’s collection grew, she wrote letters to scientists who studied whales and dolphins, inviting them to help her identify the species. In 1973, James Mead, now curator emeritus of the Smithsonian Institution’s mammal collection, was among the first to identify her finds. He had tagged along with whale researcher Roger Payne, who became famous for his research into whale song. They visited the Goodalls on their way to serve as nature guides on a cruise of Antarctica and were fascinated by what they saw in Goodall’s living room and backyard, particularly the skulls of the spectacled porpoise, a creature so rare that most marine mammalogists had never seen one, living or dead. Eventually, two spectacled porpoise skeletons and part of a skull preserved by Goodall became part of the Smithsonian collection. Today, Mead believes they are still the only three such specimens in North America.

Inspired by the scientists’ visits and realizing the bones had scientific worth, Goodall spent more time searching local beaches. Soon, her collection included some of the world’s rarest marine mammals—Commerson’s dolphins, Peale’s dolphins, hourglass dolphins, and even the skull of an Andrew’s beaked whale, an animal that, even today, has never been seen alive. 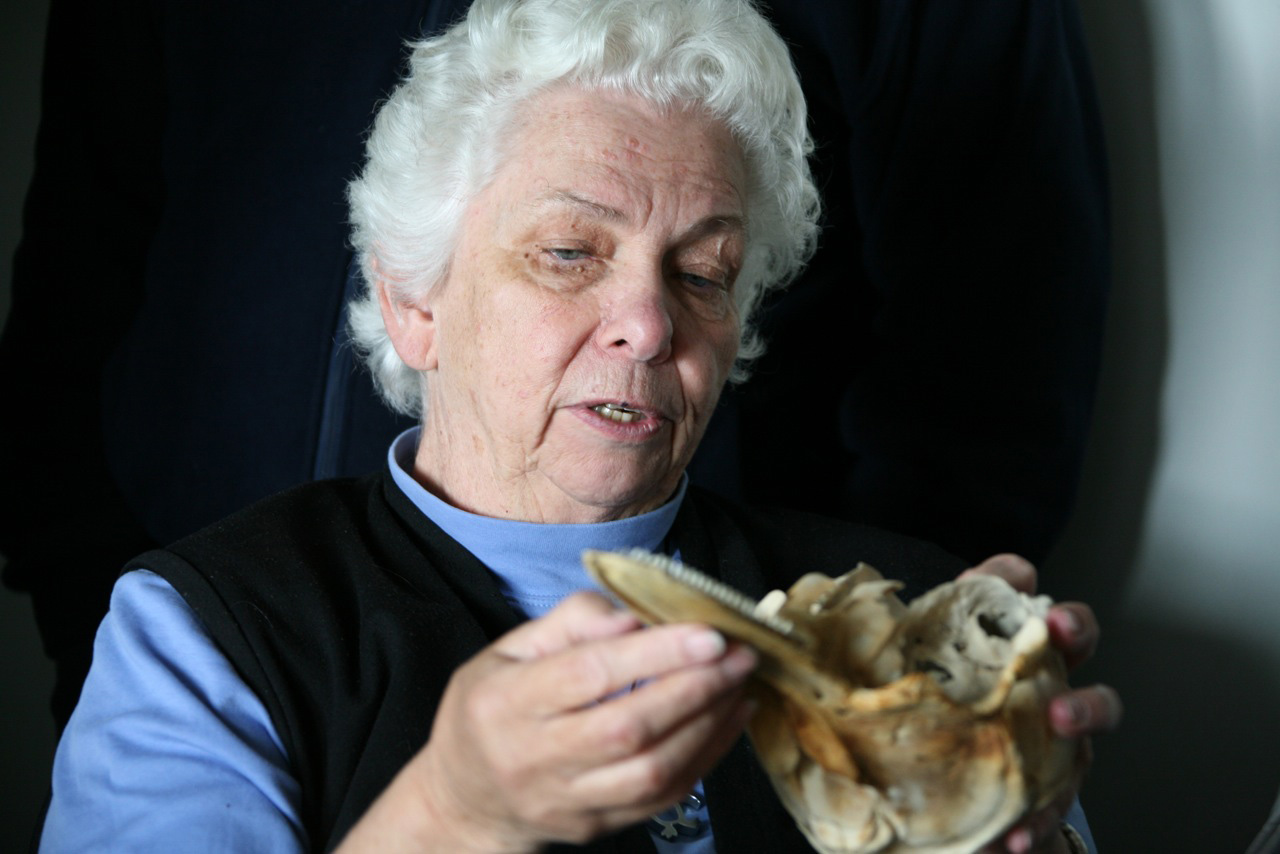 Natalie Goodall examines one of the hundreds of skulls she collected over her lifetime. Photo by Gustavo Groh

“Natalie was a pioneer in studies of marine mammals of southern South America,” says Natalia Dellabianca, who studied with Goodall and is now a researcher at the national science laboratory in Ushuaia. Before Goodall began her work, Dellabianca says, only nine species of dolphins, porpoises, and beaked whales were known in the region. Goodall increased that number to 23 known species, and many of her specimens wound up in museum collections around the world, from Russia to South Africa and beyond.

Goodall also made sure she occasionally left the end of the world to go out into it. She wrote dozens of scientific papers and presented them at international conferences. Mead recalls that people enjoyed talking with her at conferences and invited her to all the parties. Goodall was generous with her encouragement, especially with young scientists, and her enthusiasm for the work was infectious. She was also generous with invitations to Estancia Harberton, although in those early years accepting her hospitality meant making the last leg of the journey by plane or boat.

Travel became easier in 1978, when a road was built connecting the ranch to the Pan American Highway. Perhaps it became too easy. Abby Goodall, one of Natalie and Thomas’s daughters, remembers coming home from the fields to find strangers sitting in their living room. But where others saw intrusion, Natalie Goodall saw opportunity: why not reimagine the ranch as a tourist destination? She opened a teahouse and offered tours in the summer, including trips to see the colonies of gentoo and Magellanic penguins, and the occasional king penguin on one of the ranch’s islands. (The Goodalls leased the rights to run penguin tours to two local companies.) Once she established this off-the-beaten-path getaway, Goodall applied for a grant from an oil company to construct Museo Acatushún just steps away from the bone house where she prepared her specimens. Built in 2001, Goodall funded its day-to-day operations using lease money from the tourist companies. 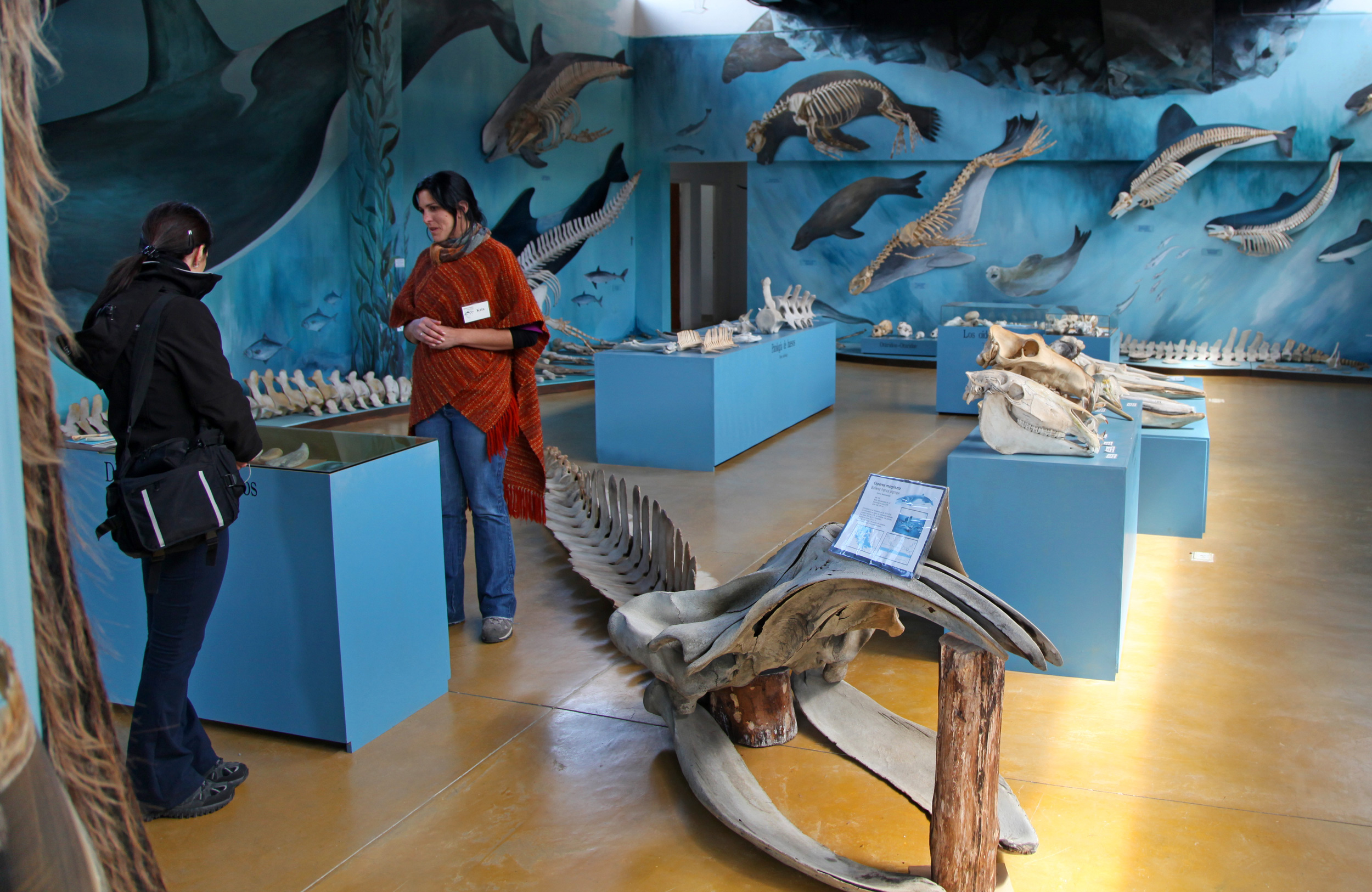 Visitors to Museo Acatushún learn the stories of marine mammals from the Southern Ocean. Photo by Liam Quinn

Scientists who stopped by on their way to Antarctica had always been welcomed with tea and lemon cake, but once the museum was built, with extra workrooms and housing, as many as five or six scientists from as far away as Japan arrived each summer to study and compare the physiology of different species using the collection.

Young scientists—doctoral fellows and interns, mostly from Latin America—filled the bone house with laughter and song as they helped Goodall prepare specimens; it was a smelly but fun business. Goodall nurtured a generation of female marine biologists who continued to collaborate long after leaving Estancia Harberton.

On March 21, 2015, Goodall entered specimen number 2,885 of her marine mammal collection in her logbook. It was a pilot whale, just like the first entry in the log. It was also her last entry. She died on May 25, 2015, not long after her 80th birthday. She had put in a full day of work just the day before.

Her detailed records and collections, which also included 2,554 bird skeletons, a herbarium with over 7,000 specimens, and over 200 scientific papers, are, of course, her great legacy, but she also was a mentor and an inspiration to many female scientists. 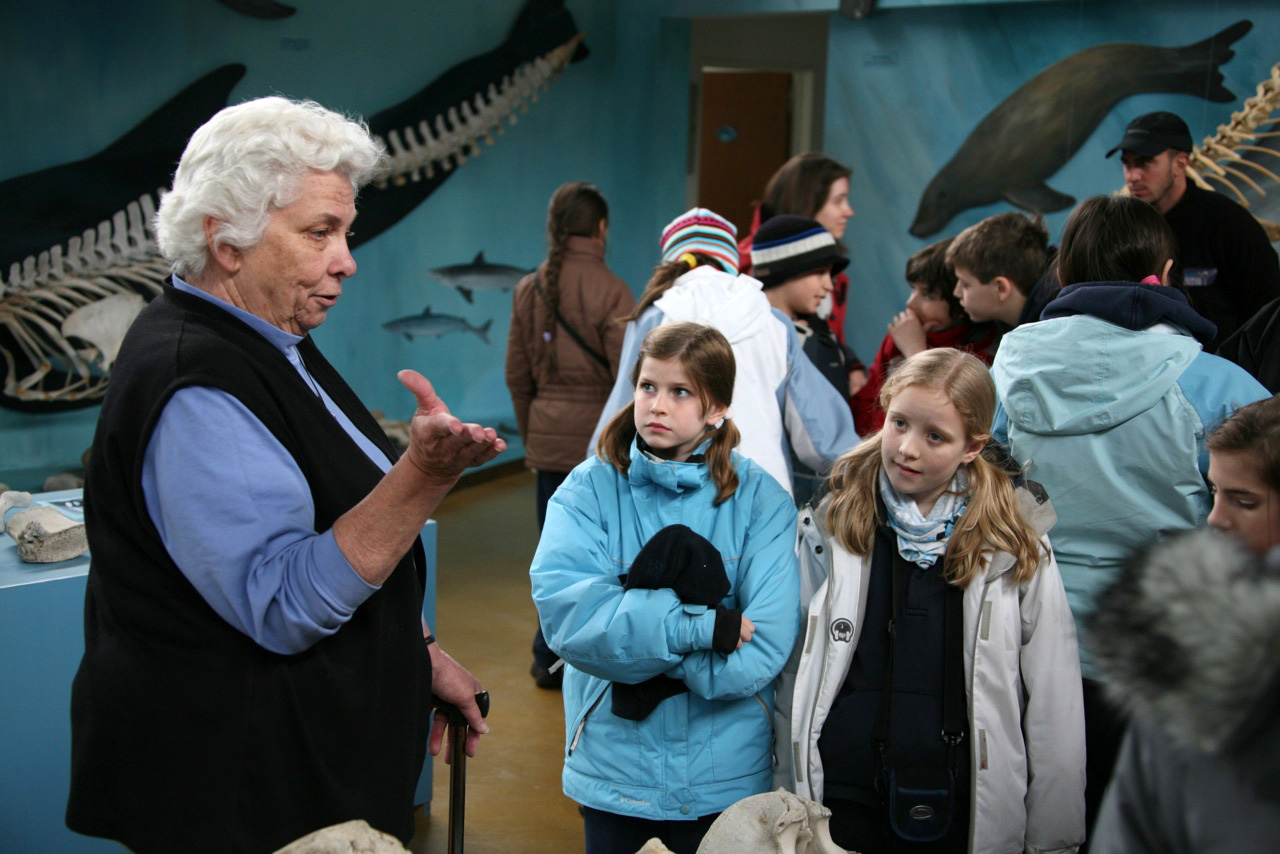 Dellabianca says that she didn’t truly appreciate her mentor’s accomplishments until she learned that Goodall received a gold medal from the Society of Women Geographers in 1996, an honor that’s been awarded to only 19 women, including Amelia Earhart, Margaret Mead, Mary Leakey, Jane Goodall, and Sylvia Earle.

“When I read the names of the other women who had also been given the prize,” says Dellabianca, “I better understood the importance of her work and the worldwide recognition of her career.”

Goodall also made plans to ensure the legacy of her beloved museum, creating a nonprofit organization, the RNPG Foundation, to accept donations. Marchesi, one of the six researchers on the foundation’s scientific steering committee, is confident of Museo Acatushún’s future, saying that the steering committee provides strong direction and the tourism funding gives it financial security. But the museum is at the end of the world and at first, Abby Goodall, now the foundation’s president, wondered if it could survive without her mother’s tenacity, knowledge, personal ties, and infectious sense of purpose. Still, she pushed on.

Museo Acatushún opened for the season as scheduled in October 2015. Tourists still come, but to give the staff time to reorganize, no researchers were invited this year. Nothing has been collected since Goodall’s death and, without her, the house of bones is quiet, only its shutters rattle in the wind.

But Marchesi and other scientists plan to re-create the laughter and singing from days past, when students, under Goodall’s care, prepared specimens in the bone house. A group of protégés is organizing an expedition to search the region’s beaches for marine mammal carcasses, just as their mentor did for almost five decades.