It’s midday and Taylor Chapple, a new father, is at work. He hears an email alert and glances at his iPad. The tracking device he put on Tom is working well; he’s just where Chapple expects him to be.

Chapple has no way of knowing how Tom feels about being tracked, but he is not concerned about overstepping the bounds of privacy. He believes that the data from the technology holds real potential to improve not only Tom’s life, but also the lives of thousands of others just like him. Tom is not Chapple’s toddler son; he is a middle-aged great white shark.

When scientists first spotted Tom (or Tom Johnson, as he is known at Stanford University’s Hopkins Marine Station where Chapple works) they identified him by the unique shape of his dorsal fin’s trailing edge. That was nearly 30 years ago in the Farallon Islands, off the coast of San Francisco. Since then, researchers have assembled photos of dorsal fins from hundreds of individuals to help form the first population estimate of subadult and adult great white sharks in central California.

Imagine the confluence of luck needed to get those images. Great white sharks lunge faster than one can legally drive on many city streets. An individual shark must be near the ocean’s surface, close to shore or a boat, and the weather and water should be clear. And, of course, the photographer must be poised to catch the shot. Little wonder that when the digital revolution burst into our everyday lives, marine biologists were eager to adapt the novel technologies at hand to the undersea worlds they sought to understand.

“I check my emails to see which sharks are migrating through, just the same way that I check to see if someone wants to grab a beer later,” Chapple says. “When a specific shark swims by one of our monitors, the information is picked up by a satellite and then sent down to my smartphone via an app we created called Shark Net.” 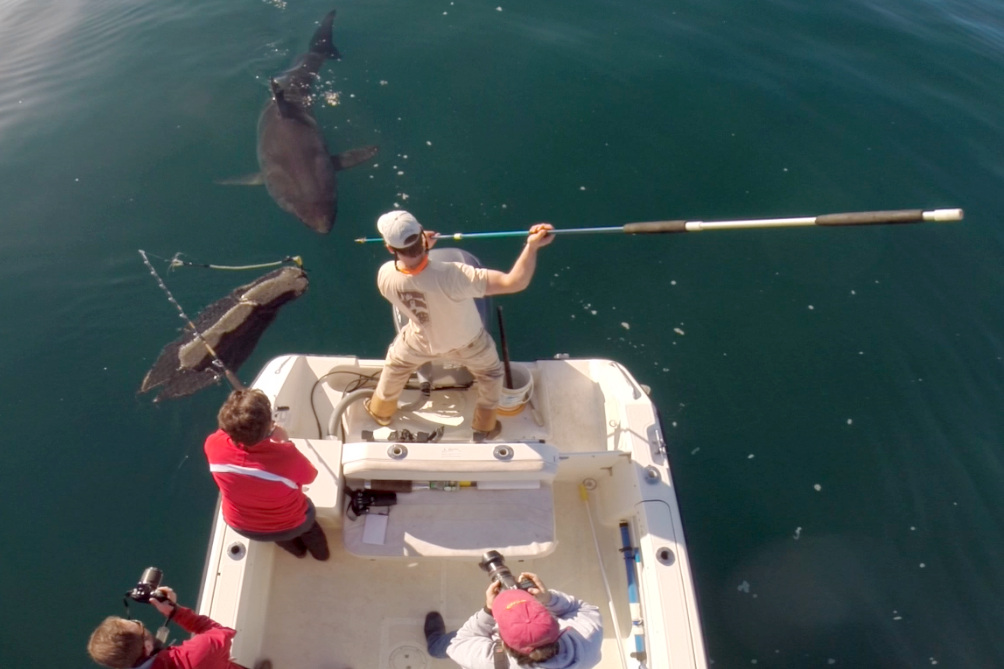 Great white shark data is now a simple mouse click away. Simple, that is, once Taylor Chapple gets the tag onto the shark! Photo courtesy of Stanford University

This combination of specificity and personalization is a boon for marine conservation. It assuages us of the notion that the ocean is one big bathtub full of water, too vast and nebulous to protect. From a great white shark’s perspective, the Pacific is an assemblage of seasonal hotspots and well-defined highways. Tagged sharks reveal precise places that matter most to them.

Along the coast of California, for example, data from the Stanford lab shows that each September, subadult and adult great white sharks start arriving in Tomales Bay, north of San Francisco; the Farallon Islands, about 50 kilometers from the Golden Gate Bridge; and Ano Nuevo, just north of Santa Cruz. They stick around these coastal hotspots throughout the fall and early winter, much of the time within waters protected by California’s network of marine reserves.

Come late winter that changes. Most of the more than 200 great white sharks tagged off the central coast of California eventually make their way to an open ocean region halfway between Hawaii and California. Researchers dubbed it the White Shark Café in recognition of its popularity. Yet pinpointing and sharing where large fish congregate in unprotected waters raises concerns: “The White Shark Café is absolutely a spot where fishers can go,” says Chapple, “but our goal is to let people know that these hotspots are places that we need to pay special attention to.”

These hotspots turn out to be essential, not only for great white sharks but for a host of other ocean predators, too. The findings of a decade-long project published in 2011 that tracked 23 species of top marine predators reveal remarkable overlap in the migrations and habitats of blue whales, elephant seals, leatherback sea turtles, and several different species of tuna, sharks, and seabirds. Witnessing life in the Pacific at this level of specificity enables researchers to better predict when and where individual species are likely to be and to begin to understand factors that control their movements—knowledge that is fundamental to successful ecosystem-based management.

New, more-specialized tags are helping Chapple understand not only where and when, but why and how great white sharks follow a seasonal pattern, homing to the California current with remarkable fidelity. Chapple speaks in glowing terms of Customized Animal Tracking Solutions, a build-to-suit company that individualizes technology for marine research. “We come up with some crazy thing we want,” he says. “Like putting a video tag on an 18-foot [5.5-meter] white shark without harming it as it swims by the boat. And they say, ‘Okay, let’s make that happen.’”

The resulting tag carries a high-definition video camera with a suite of onboard sensors, including a gyroscope and accelerometer like the ones that enable a smartphone or iPad to change orientation. Data from the tag allows Chapple to observe a great white shark’s surroundings from its individual point of view, while also providing a highly detailed profile of the position and movements of the animal’s body. 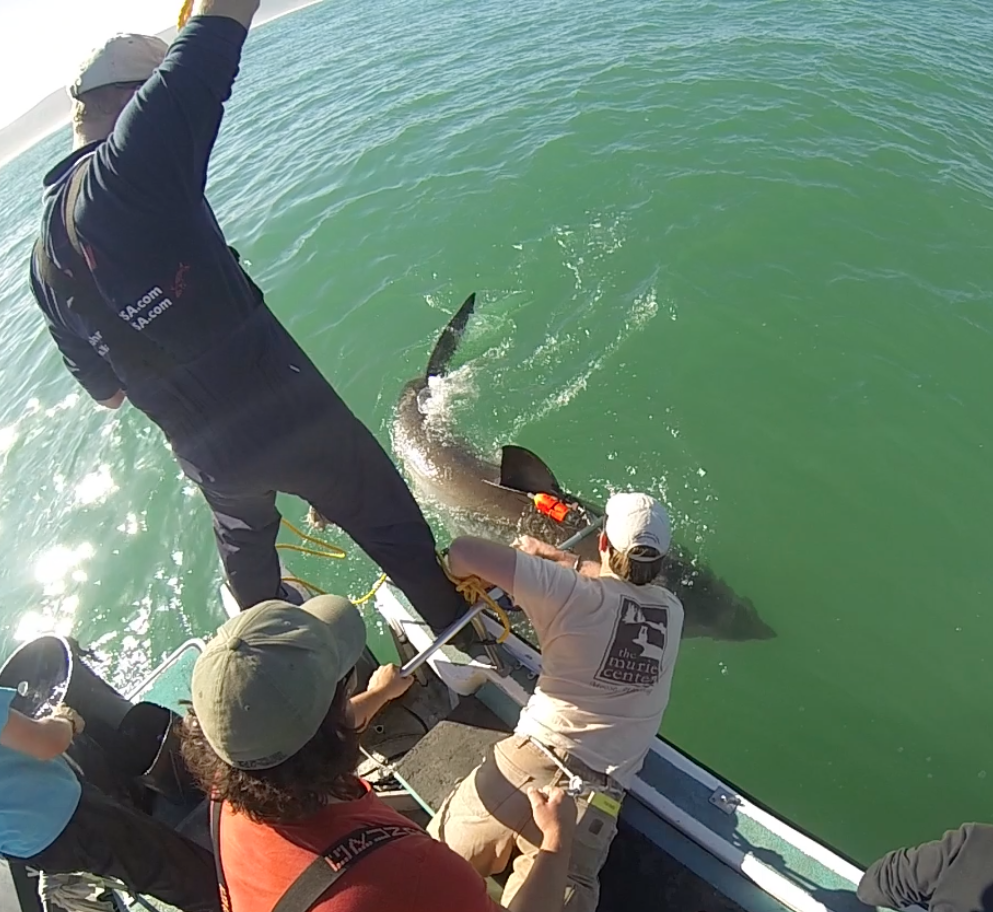 Researchers place a video tag on a 5.5-meter white shark without harming it as it swims by the boat. Photo by Taylor Chapple

“You have a 4,000-pound [1,800-kilogram] shark that launches itself fully out of the water and attacks incredibly agile seals and sea lions,” Chapple says. “How does it intercept its prey? How much power does it have to exert in tail beats? These tags give us the detailed data we need to try to figure out how white sharks, or sharks in general, work.”

The images and mapping data captured on the tag also create unprecedented opportunities for anybody with a cell phone to forge a personal relationship with an animal in remote areas of the Pacific Ocean. The idea behind Shark Net is to invite people to see the places where great white sharks live and to get to know them as individuals, just like friends on Facebook or Google+. It’s one of a growing number of apps that bring real-time images of wild animals to handheld devices. For instance, the Zoological Society of London’s Instant Wild app sends live images of a lion in Africa or a capuchin monkey in Costa Rica captured by remote camera traps directly to users and invites them to help identify the species. Plans are underway to develop an app for ocean hotspots that will ask users to help identify marine species from underwater photos taken on GoPro cameras.

These apps bring benefits as well as demands. “I can’t tell you how many emails I get whenever we have issues with our Shark Net app,” says Chapple. “But sharing my knowledge of these incredible animals and ecosystems is the joy of science. When you can do that on an iPad or a smartphone, I think it’s a really cool direction for us to go as scientists.” Chapple believes the intimacy generated through the app aids conservation. “There has definitely been an effect of having these personal technologies that bring people out to the ocean.”

Chris Thomas, state manager of marine parks in South Australia, agrees. “We provided an app to help people identify when they were in a marine reserve,” he says. “But now they want us to upskill that map app so they can upload their own photos of whales and other animals and send them to us as geo-referenced observations for our database.”

Thomas admits that it’s hard for civil servants and scientists to keep up with the growing demand from divers and other park visitors who want personal involvement in marine conservation. But research published in 2014 by Gabriel Vianna of the University of Western Australia and Mark Meekan of the Australian Institute of Marine Science suggests the value of those contributions is well worth the effort.

Professional dive guides working at popular dive sites in Palau, Micronesia, collected data on shark sightings during more than 1,000 dives over a five-year period. This information was compared to data generated by sharks outfitted with acoustic tags. The data from the divers was so similar to that from the sharks that it confirmed the guides were dependable and accurate observers. 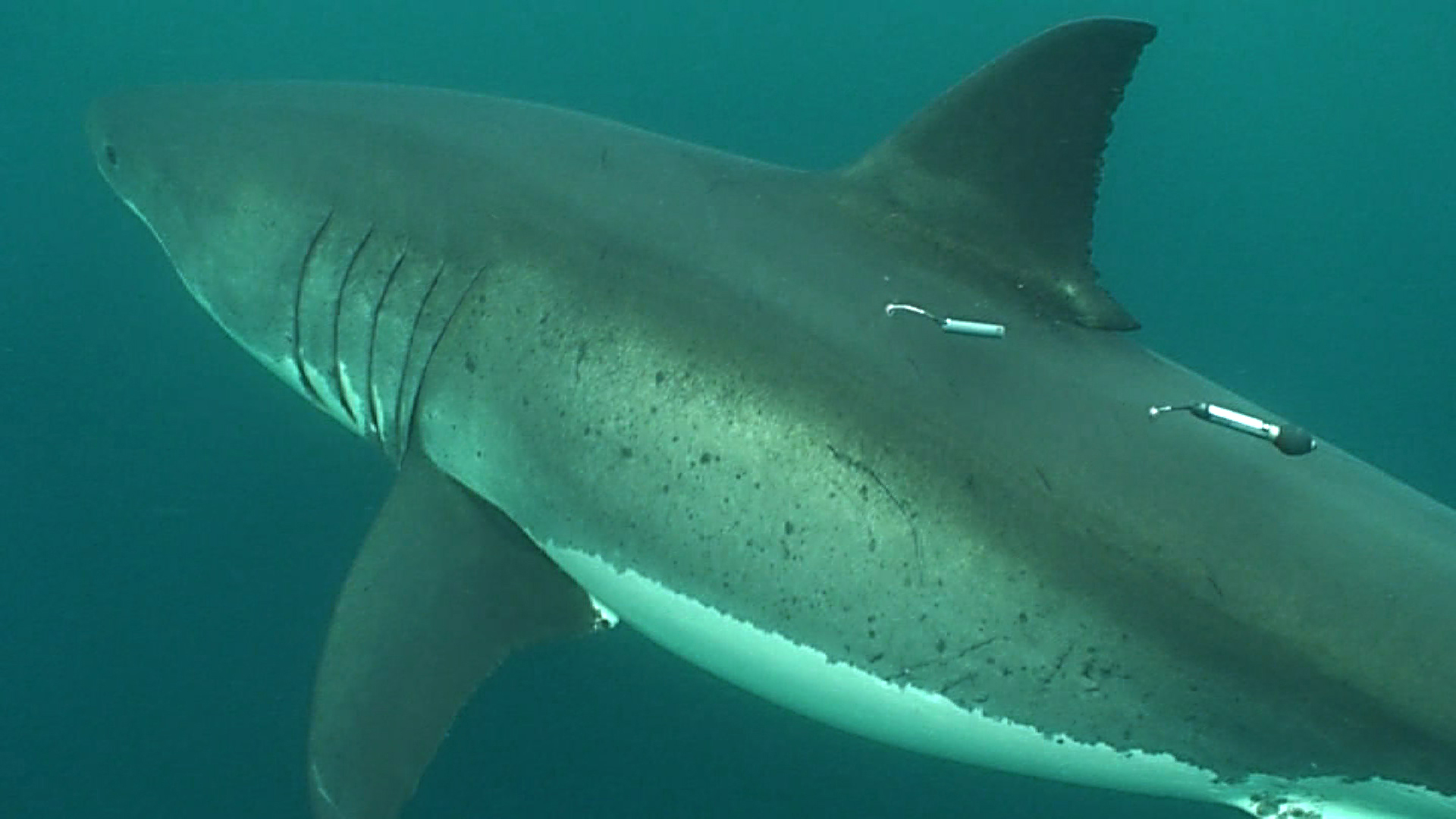 Each tag carries a high-definition video camera with a suite of onboard sensors, including a gyroscope and accelerometer like the ones that enable a smartphone or iPad to change orientation. Photo by Scot Anderson

According to Meekan, the results underscore the value of marine citizen-science projects in popular diving destinations. “This is particularly important for many developing countries and island nations that rely on marine tourism,” he says. “Reef sharks are being heavily overfished, and, at the same time, the lack of financial resources for monitoring shark populations hampers efforts for conservation.”

The request for more participatory technologies is just one manifestation of a deeper shift toward personal engagement. The Department of Environment, Water and Natural Resources in South Australia now uses citizen juries to help develop policies. They create crowdsourcing strategies to fund “voluntourism” research expeditions. The Fund My Idea program gathers ideas emerging from public consultations. The ideas are posted online, and the three that garner the most votes are eligible for funding.

Putting conservation into people’s hands is powerful. Scroll through the Monterey Bay Aquarium’s Seafood Watch app and you have instant, and highly specific, access to fish and other seafood that are sustainably harvested. Updates to the app are frequent, as consumer demand dramatically changes fishing practices for the better. In spring 2015, the aquarium received a $10-million gift to expand collaborations with food industry leaders, regulatory agencies, fishers, and key non-governmental organizations to transform the way seafood is caught and farmed worldwide.

Whether quickly checking the Seafood Watch app to see if a favorite sushi is sustainable or taking a dive trip on Google Ocean while waiting for a dentist appointment, we’re increasingly welcoming the ocean to flow through our handheld devices and personalizing the ways we connect to the sea. These relationships inspire targeted, positive changes.

In March 2015, the National Oceanic and Atmospheric Administration announced that it would expand the size of both the Gulf of the Farallones and the Cordell Bank national marine sanctuaries, where one of the planet’s most significant populations of great white sharks, and so many other highly migratory marine predators, return each year. This ocean region is so rich in wildlife that Stanford marine biologist Barbara Block calls it the “Blue Serengeti.” Like its African namesake, the region hosts diverse and rare species. More than 25 endangered or threatened species, 36 marine mammal species, and over a quarter million breeding seabirds depend on these waters. The expansion of the sanctuaries, coupled with the existing network of state marine reserves, makes the California coast one of the world’s most protected marine environments.