Worldwide, there are over 30,000 coastal golf courses. Many wayward golf balls are lost into the ocean, where they erode and contribute to the marine microplastic problem. Photo by Silver Parrot Studio/Getty Images

Alex Weber takes a deep breath through her snorkel and dives to the bottom of Carmel Bay, a calm coastal cove several kilometers south of Monterey, California. Just meters away, atop the small cliffs that drop into the waves, golfers tread on the emerald greens of Pebble Beach Golf Links. It’s early December—the sky’s blue, the weather T-shirt warm. The golfers swing their way from hole to hole on the famed golf course. Unfortunately, their aim is rarely perfect.

Weber surfaces 45 seconds later and drops nearly a dozen golf balls into a yellow mesh bag held open by her father, Mike, who is also in a wetsuit and snorkeling gear. The pair have been in the water for several hours and have collected more than 1,500 golf balls—the fallout of a sport that has unseen, and probably significant, consequences for the ocean.

About 1.2 billion golf balls are manufactured every year, according to a 2017 report in Chemical & Engineering News, and more than half may be lost in the environment. A New York Times story in 2010 reported that an estimated 300 million disappear each year in the United States alone. With many of the planet’s approximately 32,000 golf courses located beside the ocean, countless golf balls find their way into the water, where they sink and accumulate more rapidly than anyone is cleaning them up.

Weber, a grade 12 student, is doing her best, but is barely putting a dent in the collection of drowned balls. Just two weeks earlier, Weber and her father spent several hours snorkeling in the same cove and cleared the seafloor of about 2,000 balls.

Now, the ocean bottom is again awash with golf balls. 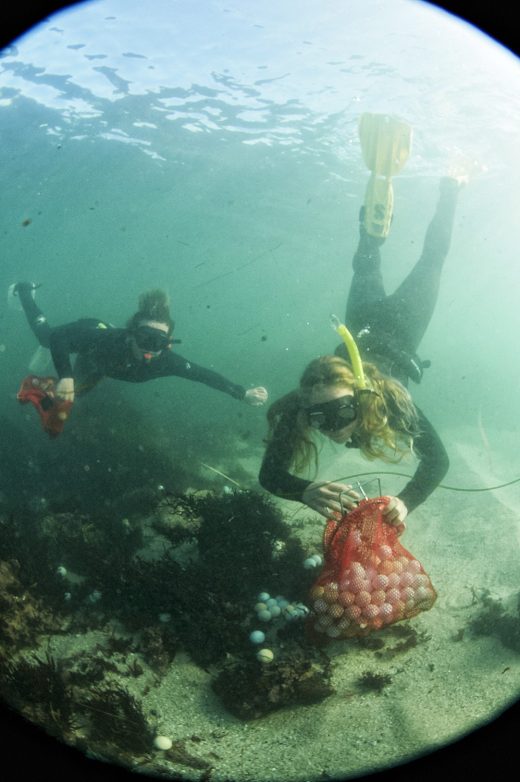 Since 2016, Alex Weber (right), shown here with her friend Jack Johnston, has been collecting golf balls in the water off Pebble Beach Golf Links, near Monterey, California. Photo by Robert Beck/Sports Illustrated/Getty Images

“Big waves come through and uncover them,” says Weber, who started collecting golf balls here in 2016. “It can sometimes make what we’re doing feel futile.”

Her effort began as a simple volunteer cleanup job but has morphed into a novel research project in which the golf balls are data and Weber is a groundbreaking scientist. To date, she and her helpers have collected more than 20,000 golf balls. Weber keeps the stash at home in buckets and barrels, where the balls are sorted by collection site and graded by level of wear. Number ones, she explains, appear new, still shiny and covered with dimples. Fours are as smooth as ping-pong balls, their outer layers of plastic polished away. The fives are so old their shells have worn away entirely, allowing spaghetti-like rubber to erupt out the sides.

To better understand the problem, Weber is collaborating with ecologist Matthew Savoca, a California Sea Grant State Fellow who earned his PhD studying the effects of plastic and marine debris on the ocean. Together, they are writing a paper they hope to have published before the end of the year. Their research, Weber says, is intended to set a baseline understanding of the problem while exploring why the balls gather in certain areas, how long it takes for them to break down, and what it all means for marine life—all topics that nobody else, it seems, has closely explored. Some of this subject matter may be explored in more depth in subsequent studies, Weber says.

“But in this first paper,” she explains, “we’re basically just saying there are golf balls in the ocean.”

According to a former golf pro at Pebble Beach, that course alone hosts about 62,000 rounds of golf per year, and Weber says caddies working the course have told her that three or four balls are lost per round. Even a conservative estimate would suggest that tens—and perhaps hundreds—of thousands of them reach the ocean.

Golf balls are made of a rubber core, covered in a plastic coating. These golf balls collected by Alex Weber show various signs of erosion. Photos by Robert Beck/Sports Illustrated/Getty Images

In his 2012 book Sandy Parr at the 19th Hole, author Mohamed Noorani reported that one billion golf balls—almost 46 million kilograms, much of it plastic—disappear every year. Some of this material is recovered. A cottage industry, in fact, is based upon collecting and selling lost golf balls. Todd Baker, an Indiana golfer who manufactures wooden Eco Golf Balls that float in water and biodegrade, says entrepreneurial collectors retrieve millions of golf balls from ponds, lakes, and rivers each year and sell them to vendors.

“But golf balls that go into the ocean are pretty much goners,” he says.

They don’t just sit inertly on the seafloor, either. As Weber has documented, they corrode. A standard golf ball weighs about 46 grams, but those she has recovered have lost as much as a third of their mass. That means for every 1,000 submerged golf balls, several kilograms of microplastic are shed into the ocean. Such debris may enter the food chain through creatures such as copepods and anchovies. Plastic tends to attach to a variety of contaminants that may be present in the water, including PCBs, and research has shown these particles can bioaccumulate in aquatic organisms, disrupting behavior and cellular functions.

University of Toronto scientist Chelsea Rochman studies microplastics, one of the planet’s most concerning but least understood forms of pollution. “It’s ubiquitous now,” she says. “We find microplastic virtually everywhere we sample. It affects wildlife, and it’s in our seafood.”

Although a leader in her research field, Rochman has not studied golf ball toxicity, nor has she ever found a golf ball in a trawl-net trash survey—probably, she guesses, because she has not surveyed areas near golf courses.

Rochman notes that much microplastic is so degraded that it cannot be traced back to its source. “So it’s really important that people are focusing on the bigger material, because that can influence policy change,” she explains.

There’s no question how the golf balls landed in Carmel Bay. “They’re different from other types of plastic pollution in that way—you’ve got a very clear point source,” Savoca says.

Still, prompting policy changes takes time and effort. When Richard Steiner, a retired professor of marine conservation at the University of Alaska, demanded in 2016 that authorities investigate a resort in Fairbanks, Alaska, that challenges its guests to hit golf balls across the Chena River, the Alaska Department of Environmental Conservation took little meaningful action. Steiner said the practice, promoted by Pike’s Waterfront Lodge for many years, has created a stream of golf balls flowing downriver to the Bering Sea, creating a potential threat to marine life. While there was a temporary shutdown of the driving range in 2016, in a September 2017 letter to Steiner, the Department of Environmental Conservation’s water division director Michelle Hale said the “limited environmental risks posed by golf balls” that enter waterways merited no enforcement action. Steiner also made the US Environmental Protection Agency aware of the matter, but the agency has said it is not pursuing an investigation. The resort’s owner, Jay Ramras, did not respond to requests for an interview. 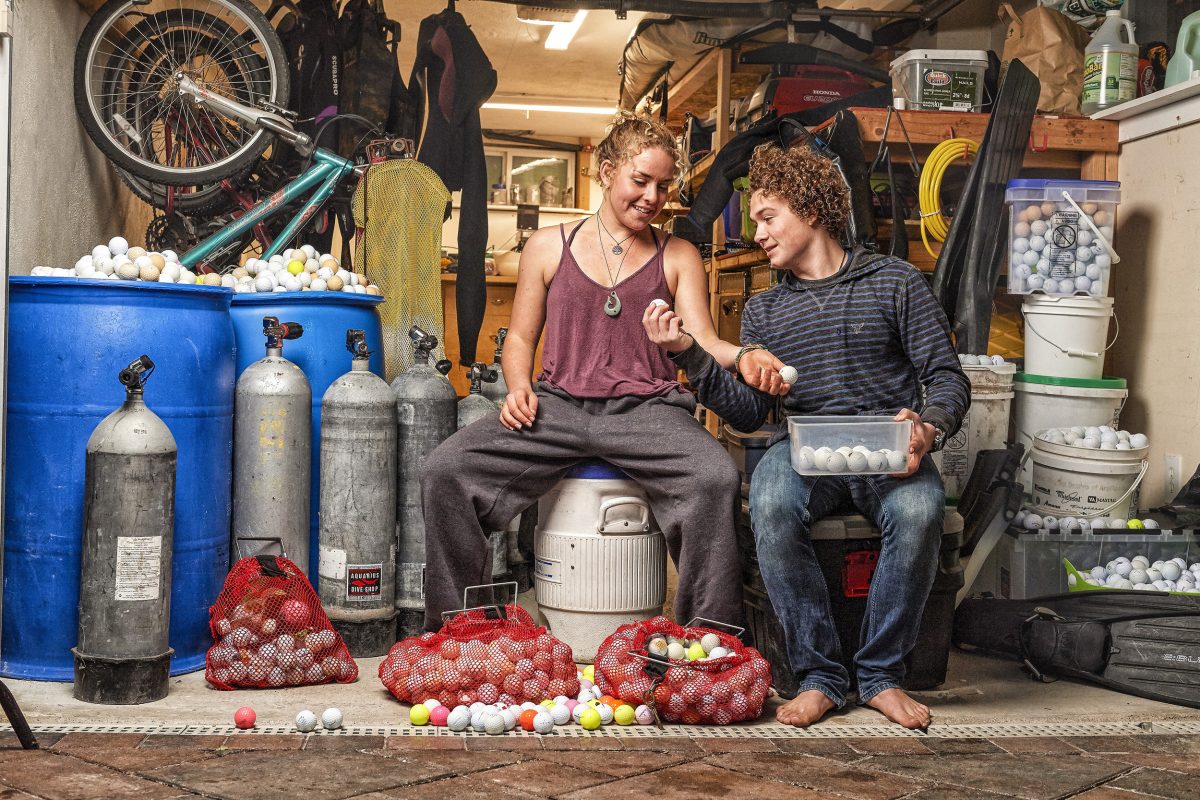 Weber and Johnston inspect some of the over 20,000 golf balls they’ve collected from the ocean and stored in Weber’s garage. Photo by Robert Beck/Sports Illustrated/Getty Images

Even if golf balls entering the Chena River never reach the ocean, those used in the Bering Sea Ice Classic Golf Tournament, an annual event held in western Alaska, almost certainly do. Participants play on the frozen surface of the sea, and an online bulletin promoting the event says golf balls used in the competition “have a tendency to roll into cracks in the ice or get lost in snow drifts.”

This marine region, Steiner points out, is a summer feeding zone for gray whales. “They scoop up their food from the seafloor,” he says.

In fact, golf balls have been found in the stomachs of at least two gray whales found dead in Washington State—one in 2010, the other in 2012—though the balls were not identified as the cause of either death. Golf balls also appear in bird stomachs on occasion—something Steiner says he has seen scores of times while inspecting decayed albatross carcasses in the northwestern Hawai‘ian Islands. Golf balls may even find their way into birds’ reproductive tracts—in one documented case, a golf ball encased in shell was laid by a Canada goose.

“I’m very frustrated at the lack of enforcement as it clearly contributes long-lived plastic pollution to the oceans,” Steiner says.

In Monterey, officials have not bounced into action either. Scott Kathey, the federal regulatory coordinator for the Monterey Bay National Marine Sanctuary—the area of water that abuts Pebble Beach Golf Links—says his agency learned of Weber’s discovery in September 2016 and has since been monitoring the situation. No action has been taken to stifle the flow of golf balls from the fairway into the water, though Kathey says, “We are reviewing potential mitigation measures.” He also notes that the resort is beginning regular sweeps of the shoreline and is ramping up efforts to reduce the number of golf balls entering the ocean.

Pebble Beach Resorts, however, did not reply to requests for comment.

Weber says she ultimately hopes her work will act as “a catalyst for not only a policy change but a mindset change in the golf community.” To spark these shifts, she continues to collect the white plastic data key to her research.

“There’s an aggregation over here!” her father calls, pointing downward while treading water. Weber swims over and dives. A sandy trough about three meters wide and flanked by two lines of craggy rock is filled with hundreds of golf balls. Weber pauses. As a young scientist, she is driven, focused, and methodical—but for just a moment, with golf balls in every direction, she doesn’t know where to begin.