In 2014, members of Mare Liberum circumnavigated Manhattan in paper canoes to raise awareness of climate change. Photo by Sunita Prasad

George Waters held the mask in his hands, turning it over and over. He was off to a masquerade ball and showing up without a disguise was out of the question. He’d looked for a mask in a local shop and found the perfect design—grotesque enough to match the outfit he’d planned. The mask was out of Waters’s reach, though—eight dollars was a lot of money in 1867.

But Waters was creative and resourceful; perhaps he could make his own? He’d already experimented with the castoffs from his father Elisha’s box factory in Troy, New York, using paper scraps to plug the cracks in a leaky wooden boat. After a few coats of varnish to seal his handiwork, the boat was ready for the water.

Waters convinced the shopkeeper to lend him the mask for a short while. Using the mask as a mold, Waters made a copy from layers of paper and paste and was set for the ball.

With his handiwork’s success, Waters thought back to the boat that inspired his scheme. If paper plugs were good enough to make a wooden boat float again, why not build the boat itself out of paper?

“He had to muddle his way through this process of mask building,” says Emmett Smith, curator at the Museum of Antique Boats in Clayton, New York. “And if it really worked, he would’ve been trying to think ‘well, what else can I make in the same way?’”

Building a boat out of paper sounds absurd, but for a time during the late 19th century, some manufacturers considered wood-pulp paper a miracle material. Before then, paper was made from chopped cotton and linen rags and it was expensive. The popularization of the Fourdrinier paper machine and the invention of wood-pulp paper in the mid-1800s changed everything. This paper was cheap and could be made in all sizes, lengths, and thicknesses—people went crazy for it. An 1869 article in the New York Times noted: “we have had paper collars and cuffs, paper waistcoats and wash-bowls, paper pails and pipes.”

With the family business already dealing in paper boxes, George and Elisha Waters were well positioned to profit from this Age of Paper. But their vision went beyond paper clothes and washbowls. Within months of George premiering his paper mask at the ball, father and son finished building their first paper boat. The Experiment, as they christened it, was created by layering sheets of manila paper over a wooden mold. The shell was fitted with a wooden frame and completed with a slathering of waterproofing solution—likely varnish or shellac, although the exact substance remains a mystery. After refining their technique, George and Elisha filed a patent for their paper boat design in June of 1868 and began production soon after. Within four years, E. Waters & Sons was in full swing, with an entire factory dedicated to constructing paper boats.

“This was right in the boom period of recreational small boating,” says Smith. “People were rediscovering the wilderness. Boating in the woods, boating in rivers and streams was suddenly a recreational activity.”

And they were rowing, too. Crew racing was one of the most popular sports in the United States, and by the 1870s the Waters’ light, fast, and easy-to-repair paper racing shells were in high demand by teams throughout the northeast. Even Nathaniel Bishop, a popular adventure writer at the time, was captivated by the idea of a paper boat. While on a year-long canoe trip from Quebec to the Gulf of Mexico he visited the Waters’ factory and became enamored with their boats. Bishop set his cedar canoe aside and commissioned the Waters to build him a paper canoe. He finished his trip almost six months later, his paper canoe still afloat.

E. Waters & Sons continued to grow over the next 20 years, supplying top Ivy League rowing teams with paper boats as well as applying their building techniques to other ventures, including paper life preservers and observatory domes. But despite their early successes, by the end of the 19th century the company was winding down.

“At the time the company was right in the front of technology, right on the cutting edge,” says Ken Cupery, who compiled a history of the E. Waters & Sons paper boats. But, over time, the Waters faced stiff competition from boat builders who figured out how to make their wooden canoes and shells comparable in their weight, speed, and price.

The cover of the E. Waters & Sons “Illustrated Price List” from 1878 displayed one of the Waters’ well-loved paper boats. Image courtesy of The Adirondack Museum, Blue Mountain Lake, New York

The Waters tried to keep the company afloat, but specializing in paper boats and observatory domes only went so far. Regardless of how much the paper was waterproofed, says Cupery, the canoes became waterlogged and sluggish over time. Even the university rowing teams—once the company’s biggest and most loyal customers—eventually returned to their wooden shells. In the end, E. Waters & Sons closed after George accidentally set the factory ablaze in 1901. While using a blowtorch to add finishing touches to a paper canoe, George ignited a fire that raced out of control, burning the factory to the ground and destroying the company’s entire stock, except for a few boats. The Waters never recovered from the fire, and both George and Elisha died within a few years, their paper canoes largely forgotten.

“It’s a pretty easy technique,” says Jean Barberis, a member of Mare Liberum. Latin for “the free seas,” Mare Liberum is a group of artists, activists, and boatbuilders that counts among its goals a drive to rekindle New Yorkers’ interest in preserving and exploring the city’s waterways.

Three years ago, Barberis and one of Mare Liberum’s founders, Dylan Gauthier, unearthed a copy of adventurer Nathaniel Bishop’s 1878 book, The Voyage of the Paper Canoe, while researching traditional boatbuilding techniques. The group had previously built a couple of canoes out of bamboo and this seemed like a great new project. Adapting the Waters’ ideas was simple, according to Barberis. Just like George Waters borrowed a wooden mask for his first mold, Barberis and Gauthier took a store-bought plastic canoe, coated it with a generous layer of cooking spray, and used it as a mold.

Instead of using whole sheets of manila paper like the Waters, these modern boatbuilders wield rolls of craft paper, cut into small strips. From there it’s similar to papier mâché: dip the paper in watered-down wood glue, lay it on the hull, let it dry, and waterproof with a few coats of shellac or epoxy. While it takes some boatbuilding skills to install the wooden ribs, seating, and framework of the canoe, the spirit of the design is firmly entrenched in the do-it-yourself ethos. The blueprints even include web links to instructions for the more complicated steps. 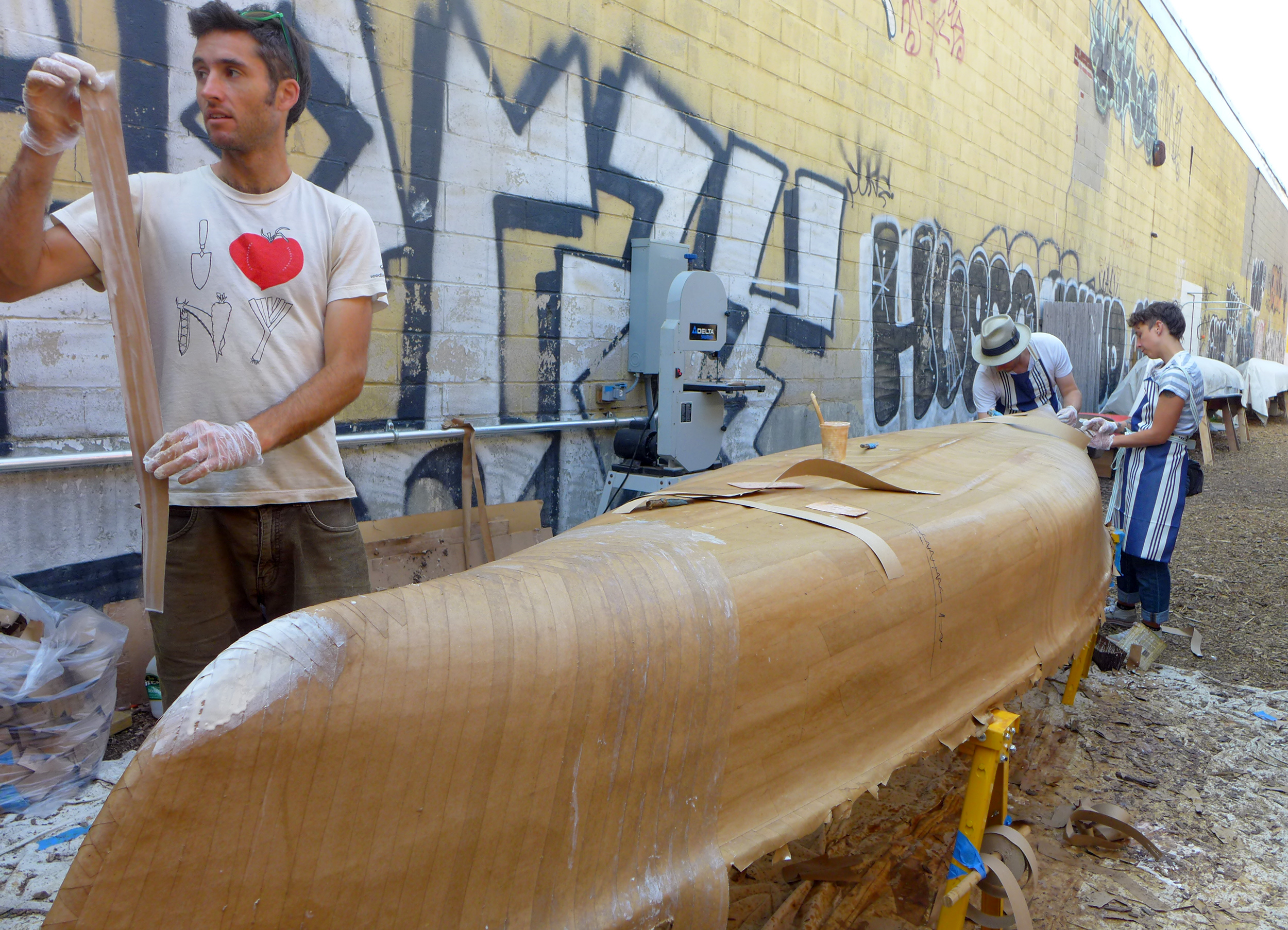 Cognizant of the limitations of their paper boats, Gauthier and Barberis regularly check their fleet of six paper boats for soggy spots, usually where the varnish has been scratched, and have coated an older vessel with fiberglass for permanent waterproofing.

George and Elisha Waters never found lasting commercial success with their boats, but Barberis and his crew aren’t in it for money. Rather than guard their blueprints, the designs used for Mare Liberum’s boats are free to download from its website. And while Gauthier doesn’t know how many people have actually built a paper canoe of their own, he says thousands have accessed the plans over the last three years. He and Barberis hope their relatively easy method of building simple, seaworthy paper boats will inspire others to build their own and take to the water.

By tapping into the same creative vein George Waters struck when he dreamed up his paper mask, Barberis and Gauthier want to revive the same spirit of adventure a paper canoe afforded during Waters’s time. For them, every person who steps into a canoe and shoves off into the East River is another who may realize these waters are just as much a part of the city as the subways rumbling beneath their feet or the bridges and skyscrapers looming above their heads. And someone who takes pride in the waters may want to take better care of them, too. There may not be many seaworthy paper boats out there apart from Mare Liberum’s small flotilla, but Barberis hopes their boats won’t be the last. 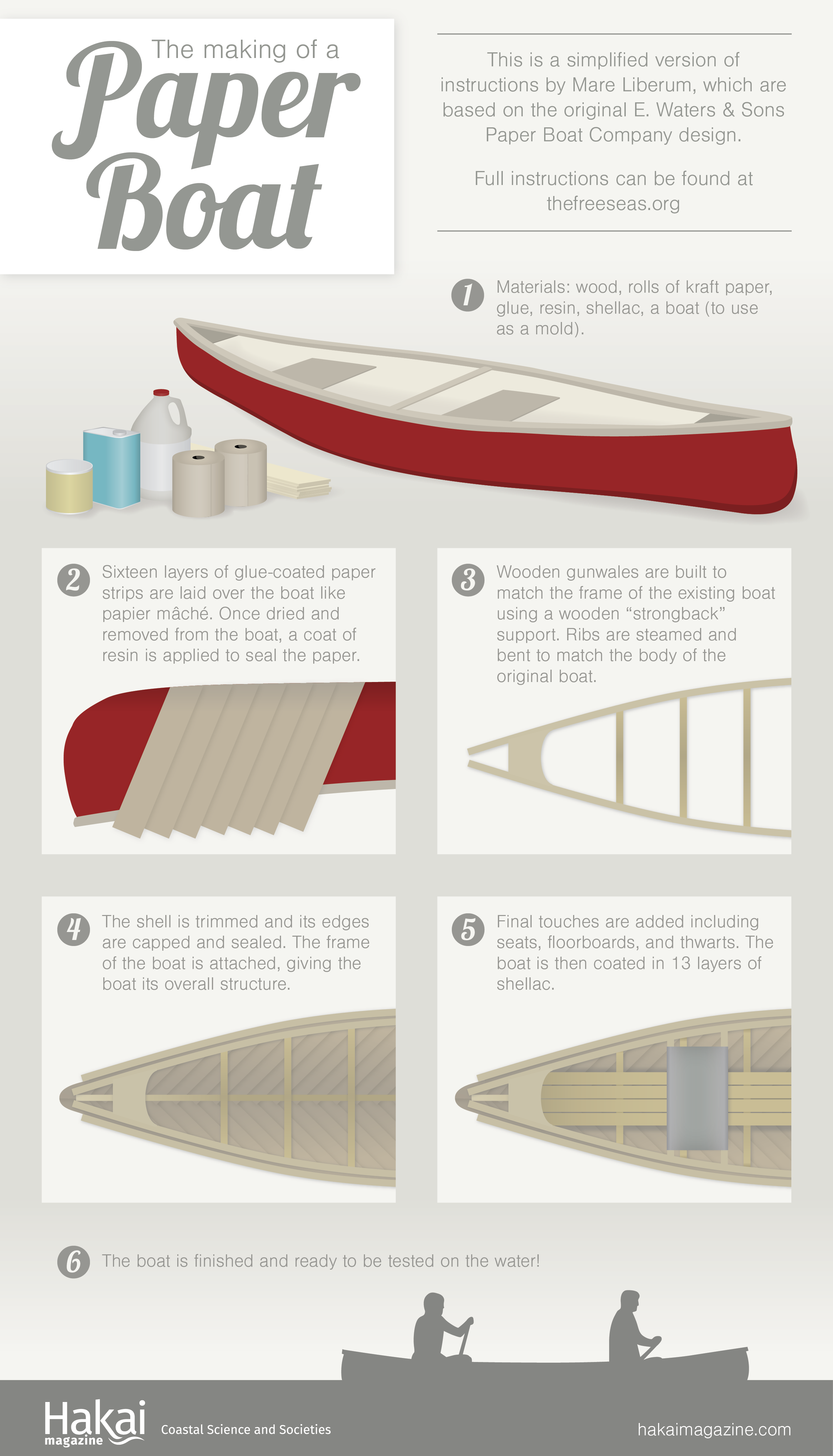