Pacific waves collide against the wall of the Kaloko fishpond on the Island of Hawai‘i. Photo by NPS

Perched on delicate pink limbs and cloaked in black and white feathers, two Hawaiian stilts poke their beaks into the water, unaware of the outrigger canoe gliding silently across the pond behind them. A bearded man paddles while his young daughter sits near the bow beside Ruth Aloua, a native Hawaiian archaeologist and the kia‘i loko, or guardian, of this traditional fishpond known as Kaloko.

The pond spans an area roughly the size of five city blocks along the Kona Coast of the Island of Hawai‘i. Members of the community who care for this place watch from the water’s edge as Aloua and the girl, Haumea, glide past a ceremonial offering of a flower lei and traditional food wrapped in kī (Cordyline fruticosa) placed carefully at the water’s edge. Aloua chants in a melodic voice that evokes her ancestors as she asks for permission from Kaloko’s spirit guardians for the boat to enter the pond’s deepest waters.

Fishponds, where wild fish are trapped and fattened to increase yields and make fishing easier, were once central to a sustainable lifestyle in Hawai‘i. But they fell into disuse as forces of immigration and development dramatically altered life on the islands. Kaloko was choked with invasive plants when Aloua set about restoring it in 2015 with the help of the community volunteer group known as a hui. Though their work is ongoing, over the past three years they’ve made significant progress in knocking back the invaders.

Today’s ceremony, the first of its kind in decades, is a monumental event; it reawakens the fishpond and reconnects the oarsman and his daughter to their ancestry, Aloua says. For although the restoration team has a long-term vision of harvesting fish from the pond and improving food security for the community, the work is also about reconnecting with culture and the land through traditional resource management. 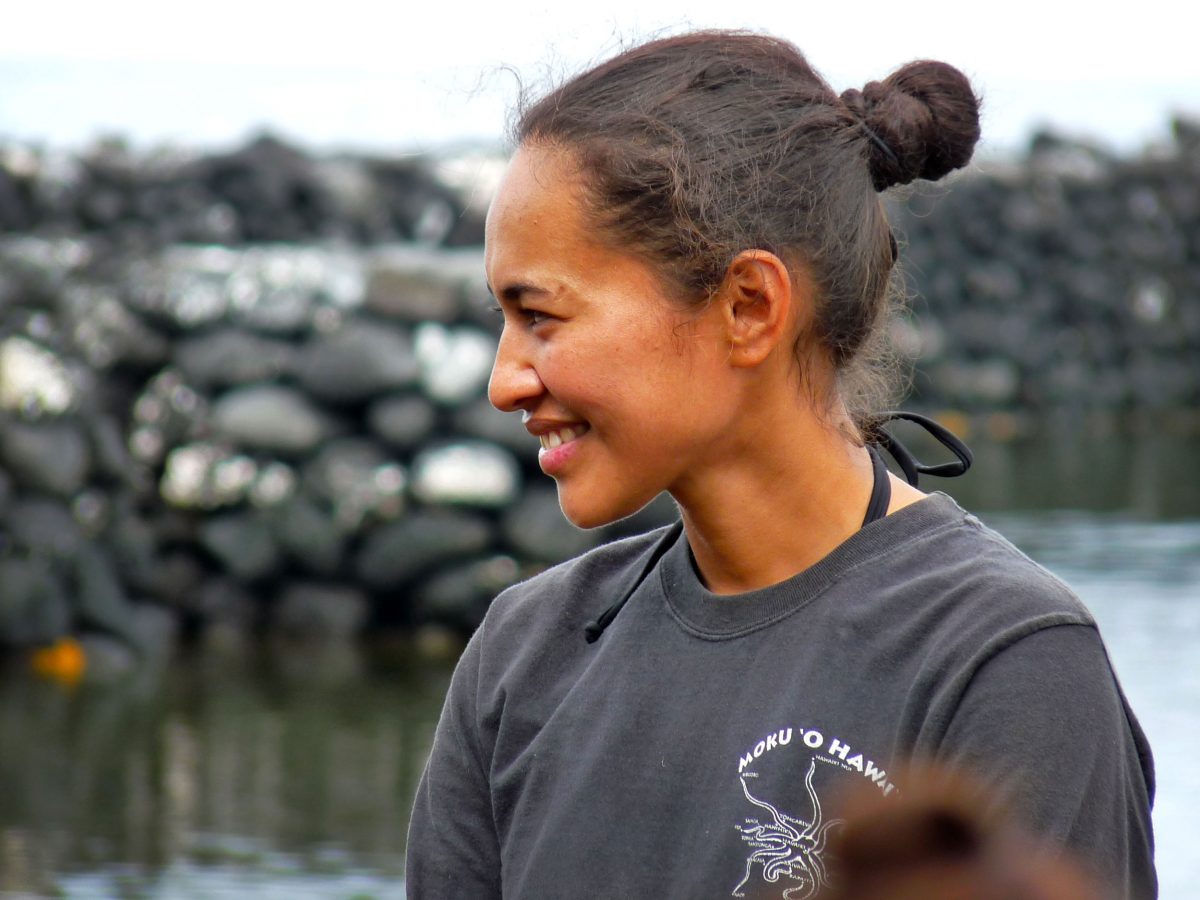 Ruth Aloua has led the restoration of Kaloko since 2015. Photo by Jon Letman

Polynesians may have settled the Hawaiian Islands around 1000 CE—though some archaeologists suggest their arrival was earlier—and went about building their first fishponds for aquaculture perhaps 800 years ago. No one can say with certainty when Hawaiians built Kaloko, but Aloua believes the pond was a reliable source of diverse sustenance and a symbol of prosperity for centuries and may be more than 500 years old.

Historically, Hawaiians built six different types of fishpond in their coastal areas—they were typically enclosures built with hand-set, lava-rock walls along the shoreline. Kaloko is an example of a loko kuapā style pond, built at the mouth of a bay in what is now Kaloko-Honokōhau National Historical Park. The porous lava rock allowed fresh seawater to circulate and for fresh water to trickle in from the land, to create brackish conditions favored by nearshore species. Workers often stocked ponds with juvenile wild-caught fish—such as ‘ama‘ama (striped mullet) and awa (milkfish)—or let fish enter naturally through sluice gates. The gates allowed small fish to pass in and out, but trapped those that lingered in the pond and grew too large. While some ponds were designated for feeding royalty, others served common people.

After the United States overthrew the Kingdom of Hawai‘i in 1893 and native Hawaiians lost control of their land, language, culture, and livelihoods, the widespread use of fishponds declined. A 1990 study by Bernice Pauahi Bishop Museum in Honolulu, Hawai‘i, identified the remnants of well over 400 ponds, many badly degraded. As a cultural resurgence that began in the 1970s gained momentum, so did interest in reclaiming their use. Kevin Chang, executive director of Kuaʻāina Ulu ʻAuamo (KUA), a community based nonprofit that supports fishpond caretakers across Hawai‘i by spreading knowledge and skills, says at least 40 fishpond restoration projects are now underway.

Aloua, who has ancestral ties to the area, first encountered Kaloko a decade ago as a college student working part-time at Kaloko-Honokōhau park. After earning her master’s degree in archaeology from Simon Fraser University in Burnaby, British Columbia, she began volunteering part-time to educate the public about the history, culture, and environment of the park and pond. Now, as the pond’s designated guardian, Aloua continues to teach. School groups gather to peer into the pond, glimpsing reflections of old Hawai‘i, as she speaks about Indigenous technology, food production, and sustainable ecosystem management.

Fishponds “demonstrate an intimate understanding that our ancestors had with the environment and humans,” she says, adding that the structures provide a lens through which Hawaiians can better understand their ancestors’ way of life. 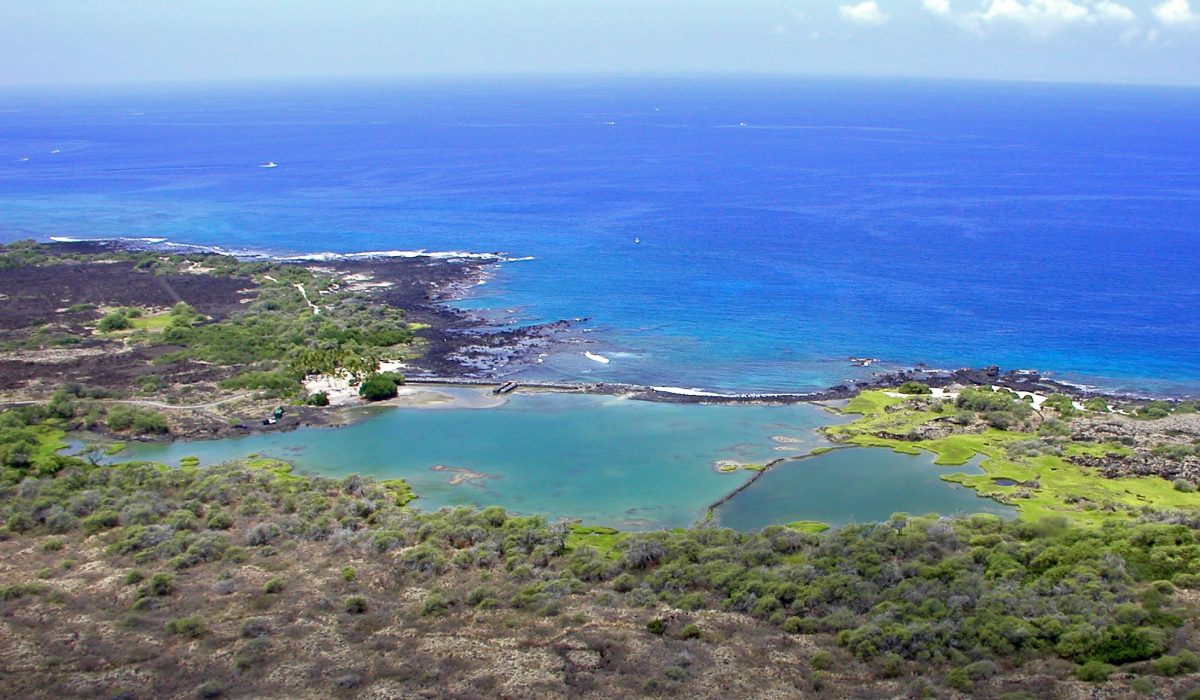 The hui workers yank invasive plants out by hand. Near the pond, they make space for native plants—makaloa, for example, a sedge prized for weaving—by removing fountain grass and kiawe (mesquite). But their main target is pickleweed.

Pickleweed blocks the flow of vital freshwater springs from the volcanoes Mauna Loa, Hualālai, and Kīlauea, which erupted dramatically in 2018.

“It looks so beautiful and healthy,” says Kimberly Crawford, a member of the hui who is training to be a fishpond guardian with Aloua, as she gestures to a patch of pickleweed, “but it’s really terrible.”

The springs—fed by rain, mist, and cloud drip that trickle into the porous volcanic rock—are believed to take up to half a century to travel between 18 and 80 kilometers from the volcano tops to the sea. The fresh water is important for the growth of limu ‘ele‘ele, a seaweed that Aloua explains forms the base of the pond’s food web. As such, the springs make it possible for Kaloko to support schools of mullet and āholehole (silver perch), as well as pāpio (giant trevally), predators like kākū (barracuda), and other reef fish that cluster along the rock wall. Besides fish, crabs and shrimp live in the pond, supporting native shorebirds like the ‘ulili (wandering tattler), ‘akekeke (ruddy turnstone), ‘auku‘u (black-crowned night heron), ‘alae ke‘oke‘o (Hawaiian coot), and ae‘o (Hawaiian stilt).

On the day of the canoe ceremony, Crawford steps gingerly along a narrow muddy path to the pond’s edge where she stoops to take a water sample. With such a reduced amount of fresh water entering the pond, salinity remains high for fish and snails, she says. If the salinity level increases any further, she worries the pond may become uninhabitable.

Even as Kaloko is under restoration, many other variables threaten to throw it off balance. Sea level rise, tidal inundation, warmer water temperatures, and changing rainfall regimes could affect the ecosystem. Gas stations, big box stores, a concrete quarry, a golf course, and Kona International Airport are all just a few kilometers away—a spill or runoff from any of those sites could potentially pollute the springs feeding the fishpond. 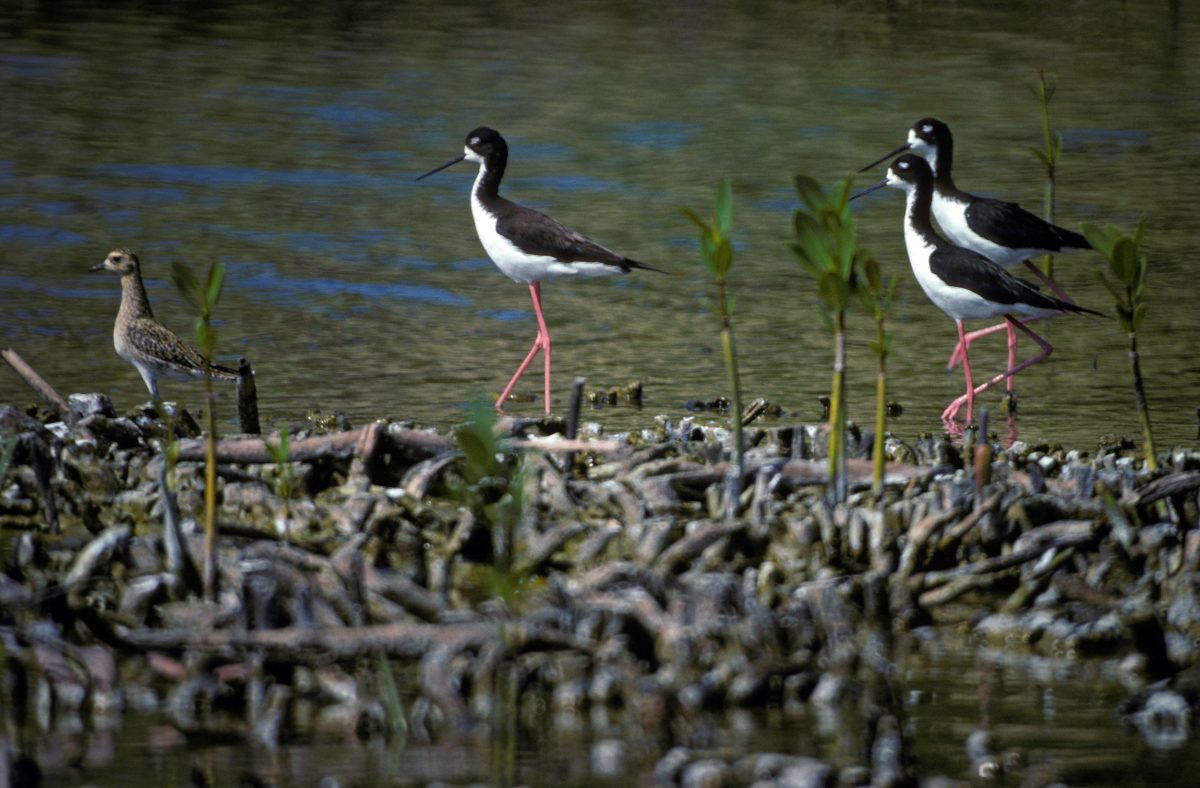 Hawaiian stilts are among the many species of animals that frequent Kaloko fishpond. Photo by Photo Resource Hawaii/Alamy Stock Photo

Aloua, who is also a farmer and an opponent of the militarization of the Hawaiian Islands, especially worries about the ongoing live-fire military testing and training that takes place at the sprawling Pohakuloa Training Area in the highest, most central part of the Island of Hawai‘i between Mauna Loa and Mauna Kea volcanoes. Spent bombs and ammunitions may leach, polluting the land and water, she says. Those concerns are expressed in the Hawaiian proverb “what happens on the mountain, happens in the sea.”

Hawaiian fishponds have been impacted by military pollution before. Although little known outside of Hawai‘i, Pu‘uloa on O‘ahu was home to 30 or more fishponds covering over 25 square kilometers. The area was once celebrated for its abundance of bivalve mollusks. Today, however, in its heavily militarized state, it is a contaminated Superfund site best known by its English name: Pearl Harbor.

Despite the threats from human activities and a changing environment, Chang from KUA believes fishponds like Kaloko will make a comeback. “I think fishponds are playing a key role in uplifting Hawaiian culture and education, but they’re also building community just by bringing people together,” he says. Fishponds serve as a barometer to measure how people are living in the uplands, and a template for how collectively caring for shared resources can build a healthier environment and achieve greater abundance.

At the canoe ceremony, Aloua finishes chanting and pauses. The morning is humid and warm, momentarily silent but for the sound of ae‘o—the stilts—chirping as they stab the water with pointed beaks, hunting for fish. The hui still has many hours of work ahead, but Aloua looks forward to the day when the pond teems with enough life that she can finally shut the sluice gates and eventually allow her community to harvest from the pond again. “I know that everyone wants to feed the elders that are still around before they pass because it has been so long since they’ve eaten fish from the pond,” she explains after the ceremony. “It would be an honor and very appropriate to have them be among the first to eat from a catch.”