In a promotional brochure from the 1840s, the quirky and ingenious boat-cloak is shown under full sail, using an umbrella to catch the wind. Photo public domain

From a fluvial terrace above Alaska’s Ivishak River, my wife, Melissa, and I take in the next stretch of our Brooks Range journey: the swift, braided stream that originates on the Continental Divide and should deliver us to the Arctic coastal plain in a week’s time. After 20 kilometers on foot, we unroll and inflate the packrafts stowed in our backpacks to the size of bathtubs. We then strap our packs across the bows and eagerly launch. Weary hips and shoulders relax. With kayak paddles poised, we let the current take charge.

A robust, collapsible boat carried easily in one’s pack had long been the dream of adventurers, and various models have been sold since the 1940s. Suited for whitewater and available in Alaska since 2000, our bombproof, lightweight packrafts are some of the most recent versions. But a one-person float is an idea that’s been buoying bodies and minds at least as far back as the 880s BCE, when an Assyrian king ordered his troops to ford rivers on greased, inflated animal skins. Then, in expedition-crazed Victorian England, Royal Navy lieutenant Peter Halkett spectacularly riffed off an everyday garment—a rubberized cloak—to create two types of inflatables. One performed beautifully on the traffic-choked Thames and the other, in the ice-choked Arctic.

Like a Victorian MacGyver, the ambitious lieutenant inserted a tubular bladder between the cloth lining and India rubber shell of a mass-produced mackintosh cloak. A small bellows, handily stored in one of its pockets, pumped up the 3.4-kilogram boat-cloak in less than four minutes. (In his promotional brochure and service manual, Halkett warned against over-inflating the bladder on hot days because it might burst as the air expanded.) Afloat, the cloak’s edges flipped upward into a sprayskirt, allowing the wearer access to pockets where the bellows and paddles—knockoffs of those for playing table tennis—were stored. To complete the outfit, Halkett added other multifunctional trappings: a walking stick with a screw-on blade that morphed into a paddle or rudder as needed, and an umbrella with a swivel joint that became an adjustable sail. 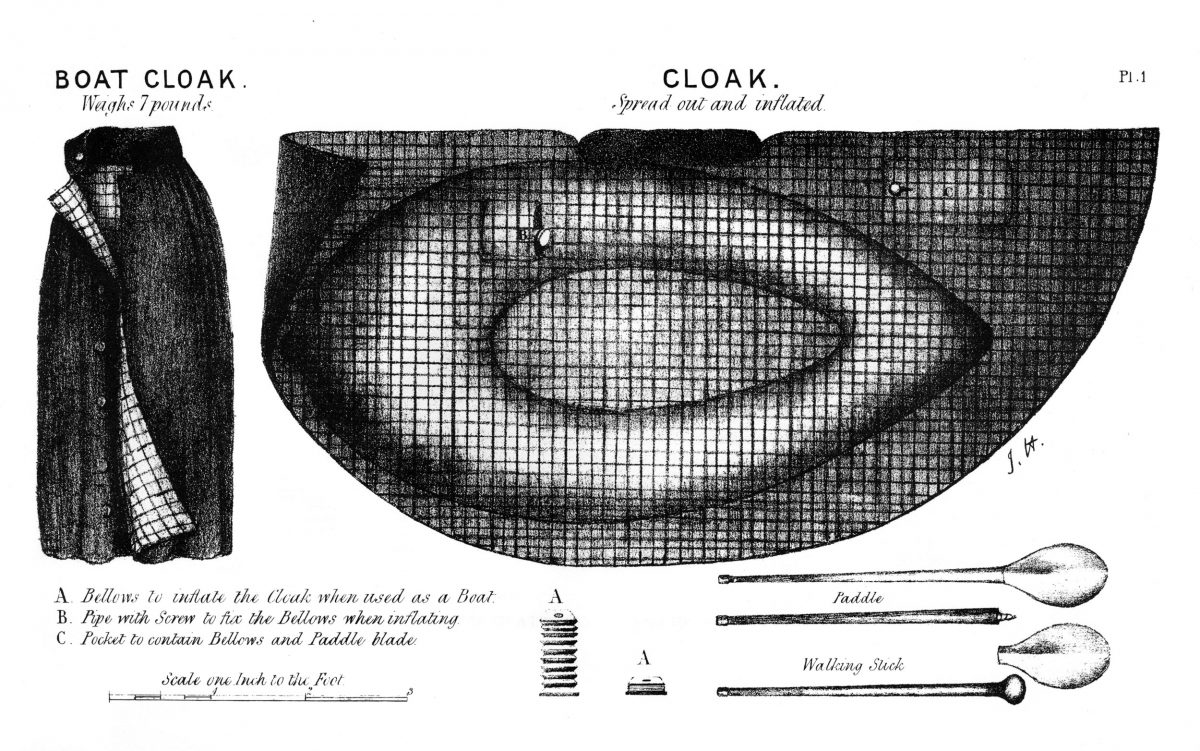 Add an inflatable tube and a pocket to hold the bellows, then rejig a walking stick to become a paddle. Voila, a waterproof cloak becomes a boat. Photo public domain

In 1844, the boat-cloak premiered on the Thames. Despite dodging steamers and being tossed about in their wakes, it did not take on any water—it bobbed on troubled waters “like a duck,” Halkett wrote in his brochure. When he tried to sail it in the Bay of Biscay, the large gulf between Spain and France, a calm forced him to furl the boat’s gingham umbrella and pick up the paddle instead. The pelagic trial notwithstanding, Halkett intended the single-person boat for inlets, rivers, and sheltered bays. However, soon his ambitions exceeded mere jaunts on the Thames.

As an officer and the son of a major shareholder in the Hudson’s Bay Company (HBC), Halkett was likely aware of feats such as Sir John Franklin’s 1819–1822 Coppermine Expedition—an overland probe to map the Arctic coast. In September 1821, starving, these explorers got stranded on the banks of the Coppermine River. The heavy canoes they were portaging had been dropped so often they were useless. The party’s naturalist, John Richardson, nearly drowned in his attempt to swim the river, and before the expedition’s end, almost half of the men perished. “Had we been possessed of such a contrivance,” Richardson wrote about Halkett’s device, “I have little doubt of our having brought the whole party in safely.”

A diligent reader of expedition reports such as Franklin’s, Halkett realized that despite the success of his first portable boat, it clearly would not do in the taxing conditions of Arctic exploring. A much sturdier craft with greater carrying capacity was essential. Halkett devised one, again from the same rubberized cloth fashionable in mackintosh cloaks. Propelled and steered with two paddles, this three-meter-long, two-passenger raft could be folded inside a knapsack. It had enough room for travelers with luggage or hunters with game. A midship air cushion neatly origamied to the size of a pocket handkerchief. Halkett promised would-be adventurers that this new double moved faster and with greater ease than the boat-cloak. 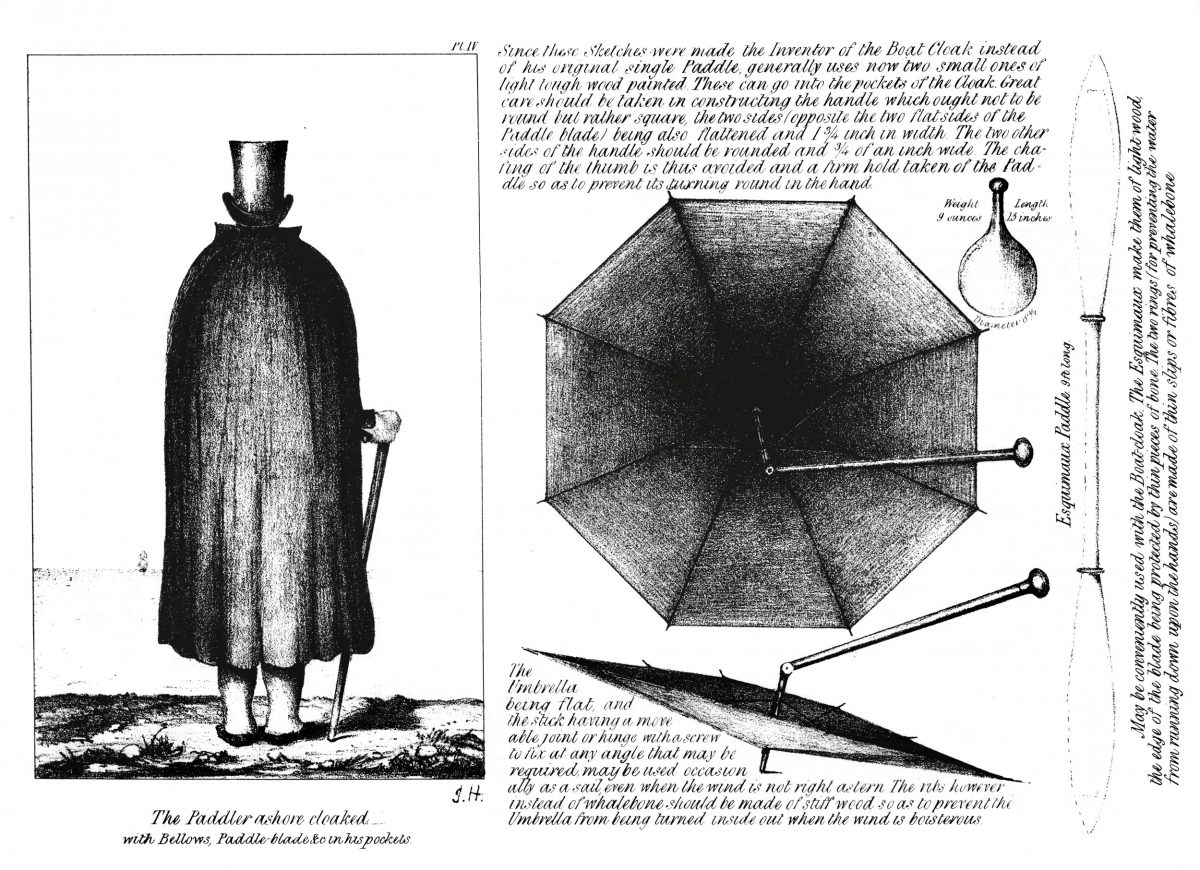 An umbrella with stiff ribs made of wood to prevent it from turning inside out was another of Peter Halkett’s multipurpose accoutrements for the boat-cloak—providing shelter from the rain as well as a way to catch the wind. Photo public domain

Dressed in beaverskin top hats, somber capes, elegant frock coats, and tartan pants, the boaters in Halkett’s brochure suggest characters by Bram Stoker or Arthur Conan Doyle. The Arctic’s reality could not have been more different, more rugged, or more disheveled. Halkett’s double, therefore, included a strong canvas slipcover to withstand ice floes and rocky shoals. Tramping through tundra, one man could shoulder the folded cover and his comrade, the deflated hull. The pamphlet lauded the craft’s multiple purposes—the canvas made a handy tent, while the hull kept sleepers dry on soggy ground.

This craft piqued the interest of expedition planners. Desiring a means to traverse any body of water they might encounter as they charted terra incognita, explorers of Canada’s barren lands ordered Halkett’s double, the first inflatable boat that seemed up to an Arctic challenge. In 1845, Franklin took one on his ill-starred quest for the Northwest Passage; it was the new prototype’s Arctic maiden voyage. The crème de la crème of high-latitude wayfarers followed Franklin’s lead. HBC surgeon John Rae, looking for clues of Franklin and his missing crew, observed that after constant deployment for roughly six weeks on a fanged northern coast, his Halkett boat never required the slightest repair. And in 1851, one of these agile dinghies saved two crew members from crushing pack ice on yet another Franklin rescue attempt. Inuit from the Arctic Archipelago reported men in a small boat “with hollow places in the sides for wind to hold it up when in the water.” Since the description only fit Halkett’s craft, the hunters either saw Franklin’s castaways or Rae’s reconnaissance party. 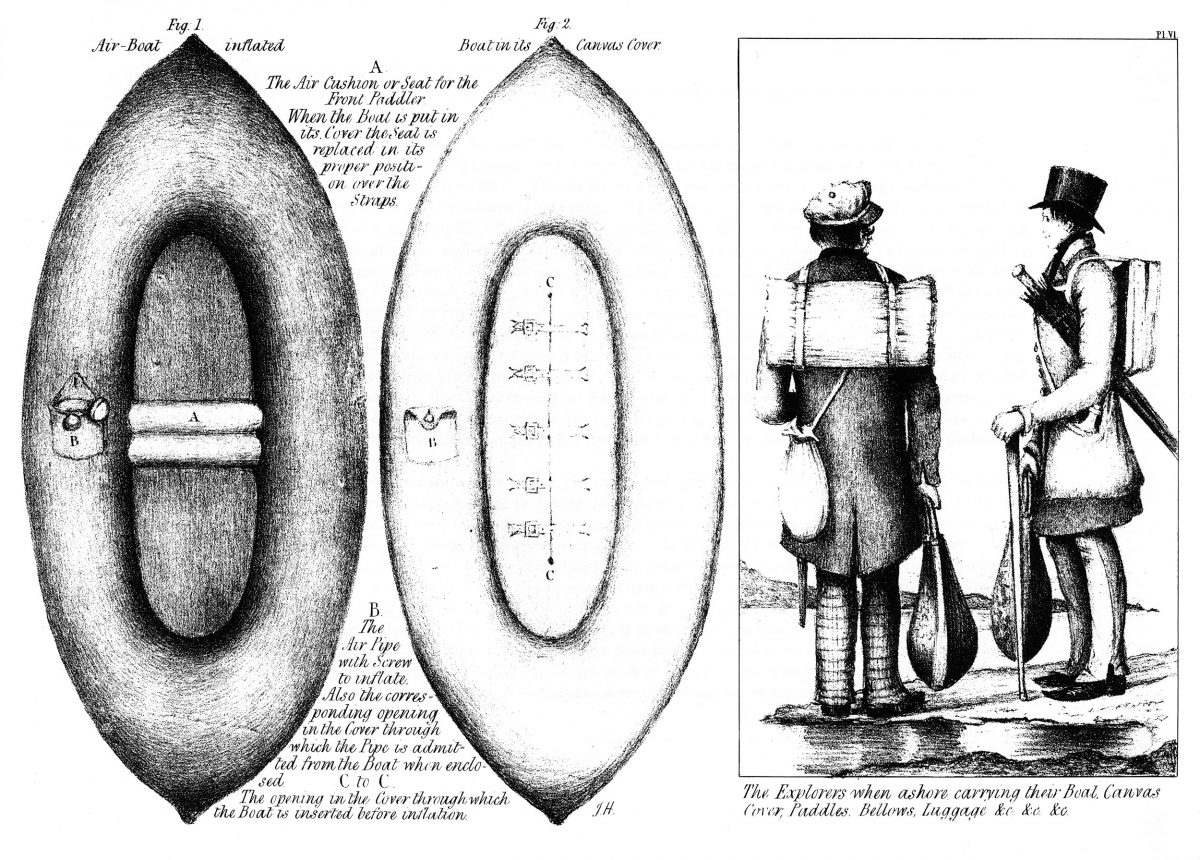 The explorers in the advertisement for Halkett’s double—an inflatable raft with room for two passengers—are decidedly underdressed for the Arctic conditions in which the raft would actually see action. Photo public domain

Despite glowing reviews, Halkett failed to market his design as an expedition boat or a lake-fishing or duck-shooting platform. Also a failure was his campaign to have the Royal Navy adopt it as standard shipboard equipment, even though in field trials, it could not be sunk or overturned when full of water and holding six people. While the Admiralty Board considered this novel mode of conveyance “clever and ingenious,” they did not adopt it. It had been conceived specifically for geographical surveys and voyages of discovery, which were but a sliver of the fleet’s mission. Only a few doubles were ever sold. Always a sideline to Halkett’s career, the boats’ manufacture discontinued after his death in 1885.

Two of these doubles survived time’s gnawing. In the 1950s, one thought to be John Rae’s was donated to the museum in Stromness, Scotland, by a harbormaster from nearby Kirkwall. It had been stored in the rafters of a woodyard that once belonged to a friend of the surgeon. The museum later showcased a replica of the boat and a Rae mannequin in a diorama in which he wields tin plates as improvised paddles. In his journals, Rae recounts navigating the Arctic’s Richardson River this way. Having fastened a rope on the far shore, his party then ferried men and provisions across in batches. 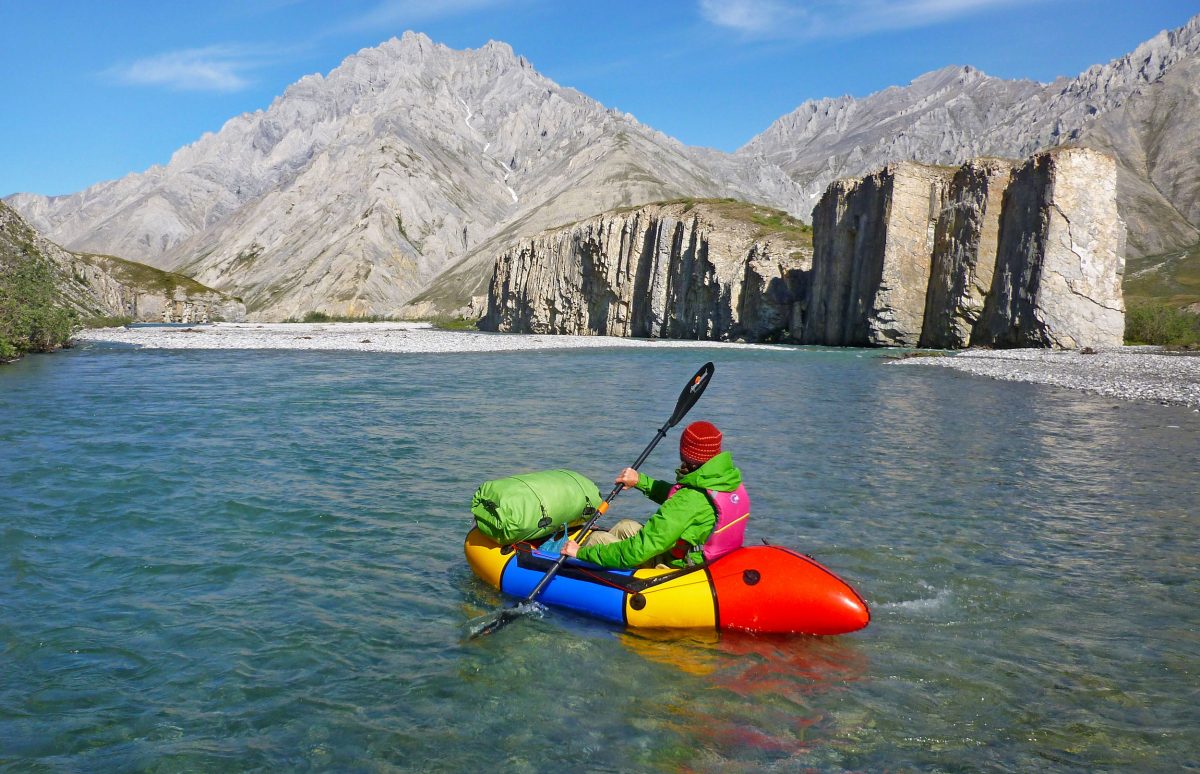 This modern packraft, being paddled on Alaska’s Ivishak River, weighs about 3.2 kilograms, close to the same as Halkett’s original packraft, the boat-cloak. Photo courtesy Michael Engelhard

The other Halkett double, housed in the Manitoba Museum since 1994, originally was to accompany Franklin’s last expedition. Instead, it was sent to Sir George Simpson, the HBC’s governor of Rupert’s Land, the company’s interest sphere around Hudson Bay. Never used, still in its wooden crate, the relic has fused into what an HBC curator called “an undiagnostic lump.” The mummified package can no longer be opened without doing damage.

It is hard to know how Halkett’s Victorian lifesavers handled, how they’d compare to modern packrafts. If Melissa’s and mine are any indication, the boat-cloak would have spun on a dime. Due to its shortness and lack of a keel, it would not have tracked well. In strong headwinds, packrafts stall; in oblique winds, they drift like Noah’s ark. Our boats don’t come with ping-pong paddles or India rubber cement for patching holes, as did Halkett’s. But our coated-nylon derivatives make great couches in camp and, propped up, colorful windbreaks. They scrape across cobbles, buck bouncy rapids, defy shallows and wood snags, and have even been dragged loaded like sleds atop sea ice and glaciers. Beaufort Sea-bound, we both agree wholeheartedly with John Rae’s sentiments: “a portable air-boat … ought to be the companion of every explorer.”