The Oregon silverspot, a rare coastal butterfly, is on life support. Photo by Michael Durham/Courtesy of the Oregon Zoo

The FedEx guy for the Oregon Zoo in Portland must never run out of stories to tell at parties. On this particular July morning, amid the chaos of children arriving for day camp as the zoo gates open, he’s picking up a box of chimp feces on its way to a primatologist in Chicago. In its place, he’s leaving something precious—Oregon silverspot butterfly pupae, carefully packed and shipped overnight from Seattle’s Woodland Park Zoo for their release on the Oregon coast.

Karen Lewis, a conservation research associate at the zoo, has been waiting restlessly for his arrival. There’s a moment of panic when the microwave-sized package is accidentally delivered to the loading dock, not the front desk, but once it’s located, she tucks her salt-and-pepper curls behind her ears, loads the beat-up cardboard box onto a cart, and heads for the butterfly lab.

The Oregon silverspot is an unremarkable-looking orange-and-black butterfly with a big problem—its survival depends on fragile oceanfront real estate, where salty breezes help maintain the open habitat it needs. For years, the team working to save silverspots has been painstakingly rearing caterpillars in captivity to boost their numbers. Now the scientists involved are preparing for their next big feat: reintroducing a population at a site where the butterflies disappeared long ago. If they can rebuild a network along the northwest coast, spread across latitudes and elevations to buffer the species against the changing climate, the silverspot might have a second chance.

At the lab, Lewis bows her head over paperwork with Kaegan Scully-Engelmeyer, the contractor who will be taking the pupae into the field. The Oregon Zoo’s own silverspots are lagging in their development, so for this first release of the year, the biologists will rely on the shipment from Seattle. By the end of July, they will have placed captive-reared pupae in critical habitat at several sites on the Oregon coast. Each one is destined for a specific meadow based on its parentage, all carefully planned out by Lewis to maximize genetic diversity. 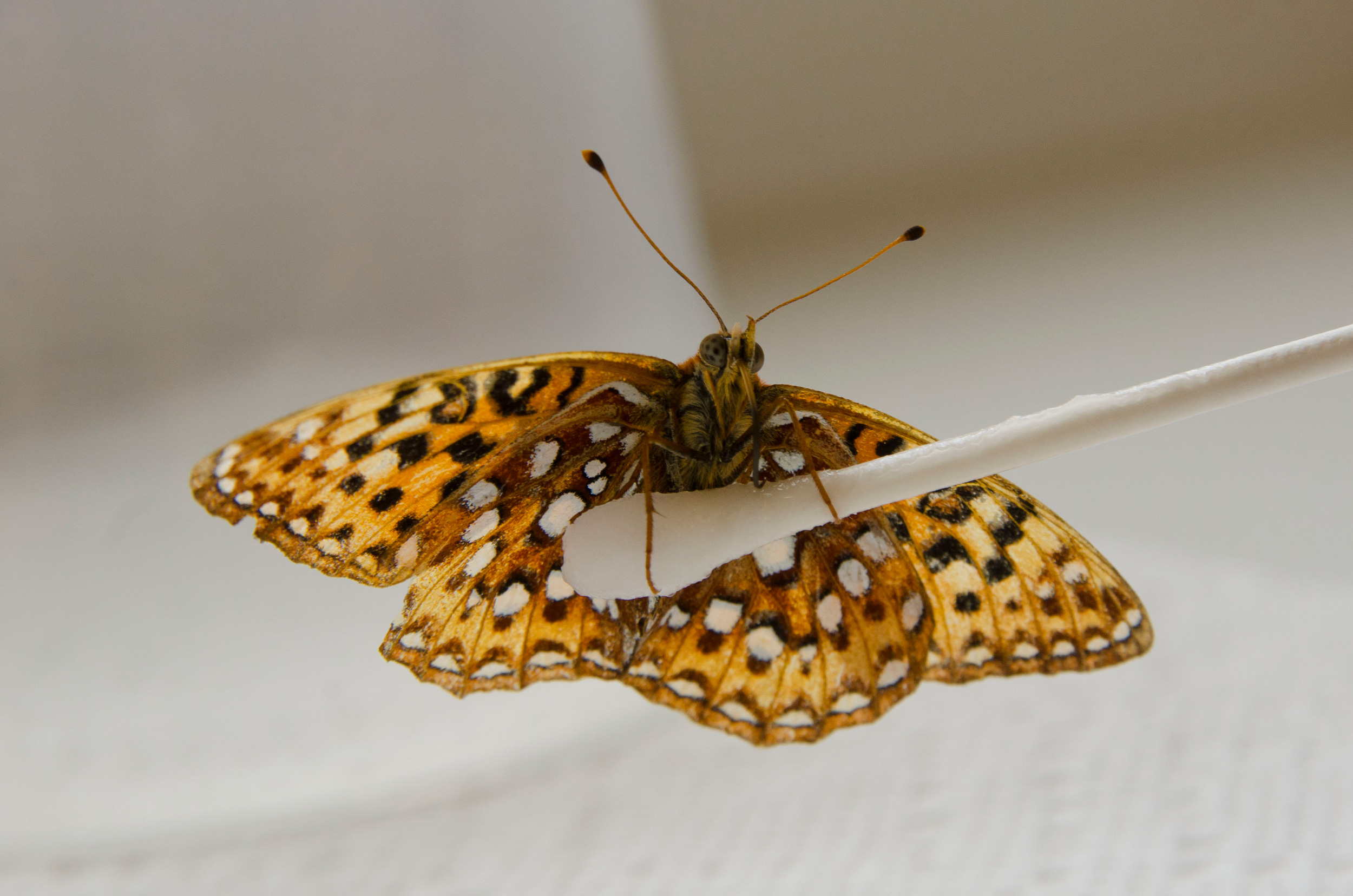 At one point, Oregon silverspots, which are unique to the Pacific Northwest, ranged from roughly northern California to Washington’s Olympic Peninsula. They thrived in a number of different habitats—coastal dunes, seaside meadows, montane grasslands in the Oregon Coast Range—but always near the ocean. Salt spray and wildfires helped create the open, treeless conditions needed for their favorite host plant, the early blue violet, to flourish.

A cocktail of factors caused silverspot numbers to dwindle, but they all come down to one thing—habitat loss. Fire suppression and the processes of ecological succession allowed their meadows to fill with shrubs and trees. Invasive plants crowded out the violets. Developers paved over coastal dunes to build condos and hotels. Now, the changing climate poses an additional, imminent threat to the remaining populations.

Silverspots were listed as threatened under the US Endangered Species Act in 1980, and soon after, conservationists hatched their plan to prevent them from blinking out. Step one in the campaign—an informal collaboration between multiple organizations, including the US Fish and Wildlife Service (USFWS) and the US Forest Service (USFS)—was figuring out how to keep the remaining isolated populations viable. The Oregon Zoo launched its captive rearing program in the late 1990s (joined by Seattle’s zoo in 2000) to shelter and protect caterpillars before releasing them back into the wild to reproduce.

Watch an Oregon silverspot caterpillar transform into a pupa. Time-lapse video courtesy of the Oregon Zoo

Female butterflies collected by zoo staff in the fall from Mount Hebo, a peak 160 kilometers southwest of Portland in the Oregon Coast Range, lay their eggs in the butterfly lab. The two-room space tucked near the lion enclosure is crammed with rows of shelves that house silverspots and other threatened butterflies at all stages of development. After they hatch, the black-and-yellow caterpillars, which start out the size of small grains of rice, are kept in the refrigerator for the winter, hibernating in moist but well-ventilated jars. “Think about conditions at the coast in the winter—we’re talking fog and rain and wind blowing,” says Lewis. The refrigerator is the best approximation at the zoo.

When spring arrives, staff members remove the caterpillars from cold storage and provide each one with the 200 to 300 violet leaves—sourced from plants grown by inmates at a nearby women’s prison—that it needs to increase its size by several orders of magnitude and then pupate within two months.

Fine-tuned through years of practice, the release process at the field sites involves placing plastic trays of individually labeled pupae inside mesh cages to protect them from predators. Workers place a bouquet of nectar plants, such as pearly everlasting and goldenrod, in the southwest corner of each cage, facing the warmth of the sun, to guide butterflies to the opening where they can escape into the environment.

Today marks an unsettling change to this annual routine: it will be the first time anyone has released butterflies to augment the Mount Hebo population, which has always been the species’ stronghold and the source of the butterflies that the zoos rely on for their captive rearing program. The past two years have brought hot, dry summers, leaving even the Mount Hebo butterflies struggling as the nectar plants they rely on wither. 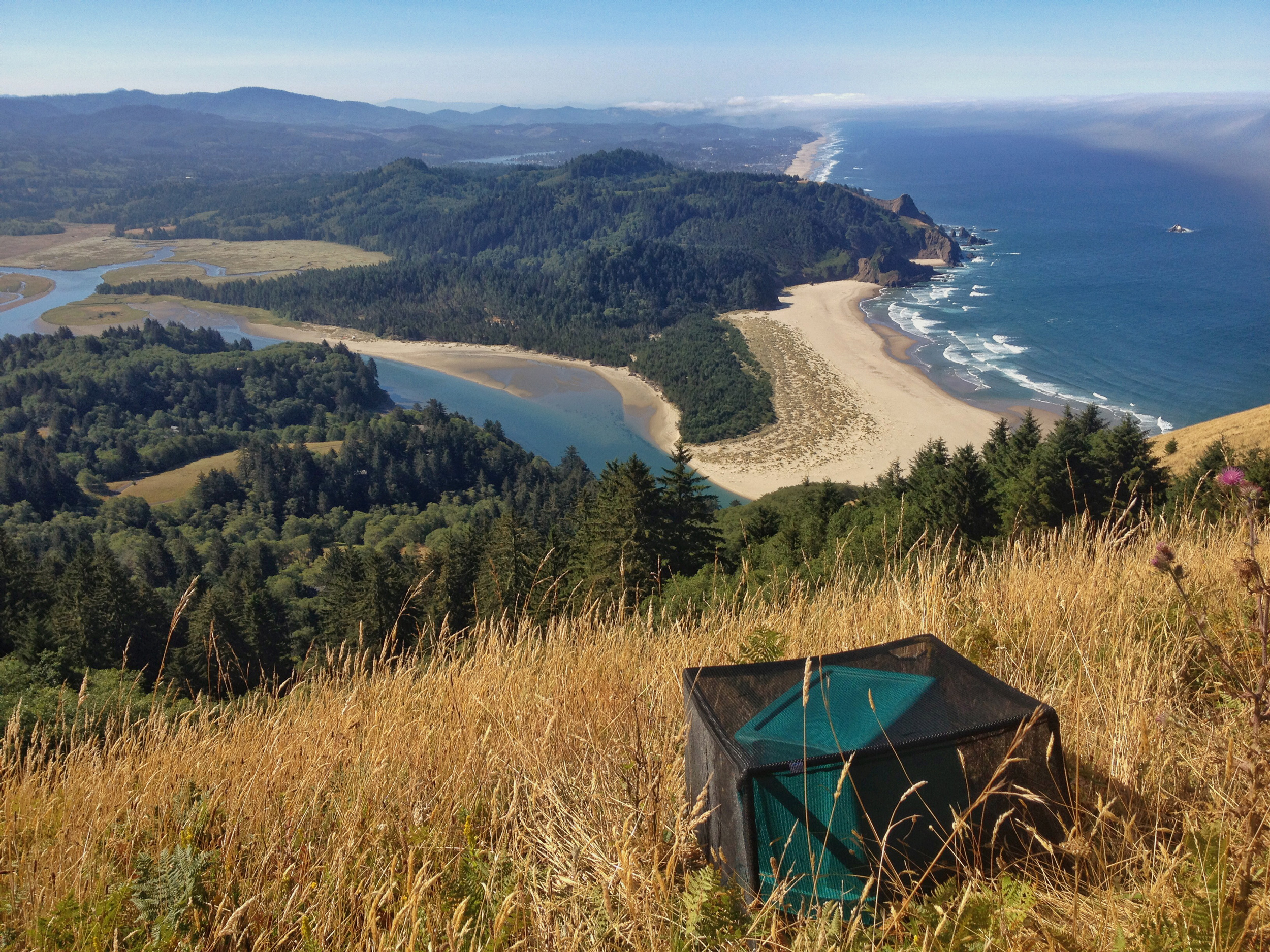 Enclosures at release sites keep pupae safe from weather and predators until the butterflies are ready to emerge. Photo by Kaegan Scully-Engelmeyer

Mount Hebo is on USFS land, a two-hour drive from Portland. I join Scully-Engelmeyer in his pickup truck and gaze out at the Oregon Coast Range landscape, a string of low peaks between the ocean and the more rugged Cascade Range. Much of it is forested, but here and there the trees give way to the open meadows favored by silverspots.

At the site, we meet up with two forest service staff and head for the butterfly meadows. The Pacific Ocean, lined with huge rock outcroppings known as sea stacks, dominates the horizon.

“It isn’t uncommon for these populations to go through cycles, but what we’ve been seeing these last couple years is dramatic lows,” the USFS’s Michelle Dragoo says as we carry trays of pupae and bunches of pearly everlasting to a release site. “We think it’s due to large-scale climate factors. It’s not that the total amount of precipitation in a given year is going to dramatically change, but the timing of that precipitation is going to shift. We’ll have warmer summer temperatures with less rain, and milder winters with more rain. Obviously that has implications for the plant communities and the hydrology. It’s going to be interesting to see.” 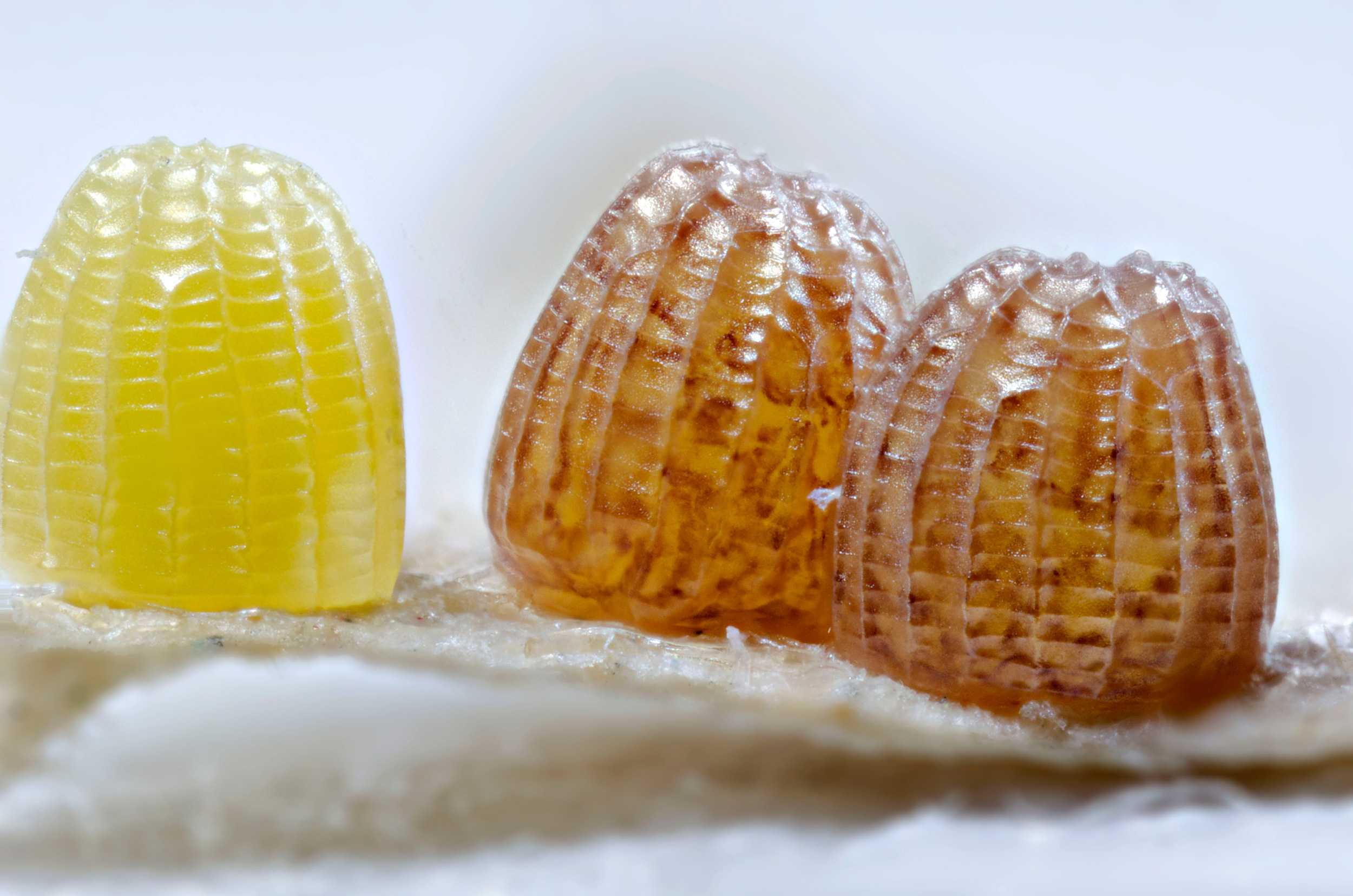 Oregon silverspot eggs, no larger than a grain of sand, are kept safe at the Oregon Zoo. Photo by Michael Durham/Courtesy of the Oregon Zoo

She points out the cheerful white daisies dotting the meadow we’re standing in. Oxeye daisy is not a native plant, and this is the first time it’s bloomed so abundantly here, something USFS staffers blame on hotter, drier summers. Things are changing. And not in butterfly-friendly ways.

Captive rearing is like life support—it’s kept the species alive, buying scientists time to figure out the best course of treatment. Now, after years of preparation, they’re almost ready to go for the cure.

A recipient of the first major butterfly transfusion will be Nestucca Bay, a wildlife refuge managed by the USFWS on the Oregon coast. It’s nestled near the sites of two of the remaining silverspot populations—Cascade Head to the south and Mount Hebo to the east—and presumably hosted silverspots of its own in the past, though no one knows how long ago they vanished. Before the land became a national wildlife refuge in 1991, it was a dairy farm, and cows spread reed canary grass, an aggressive grass usually found only in wetlands, to the headland prairies, where it formed dense, single-species mats.

In 2008, the USFWS finally got funding to build a trail so the public could access the refuge. “When we did that, we were looking around at what the site had been,” says Rebecca Chuck, deputy project leader for the Oregon Coast National Wildlife Refuge Complex, “and we decided, well, there are butterflies just south and north, what if we put their nectar plants all along the trail and see how that works?” 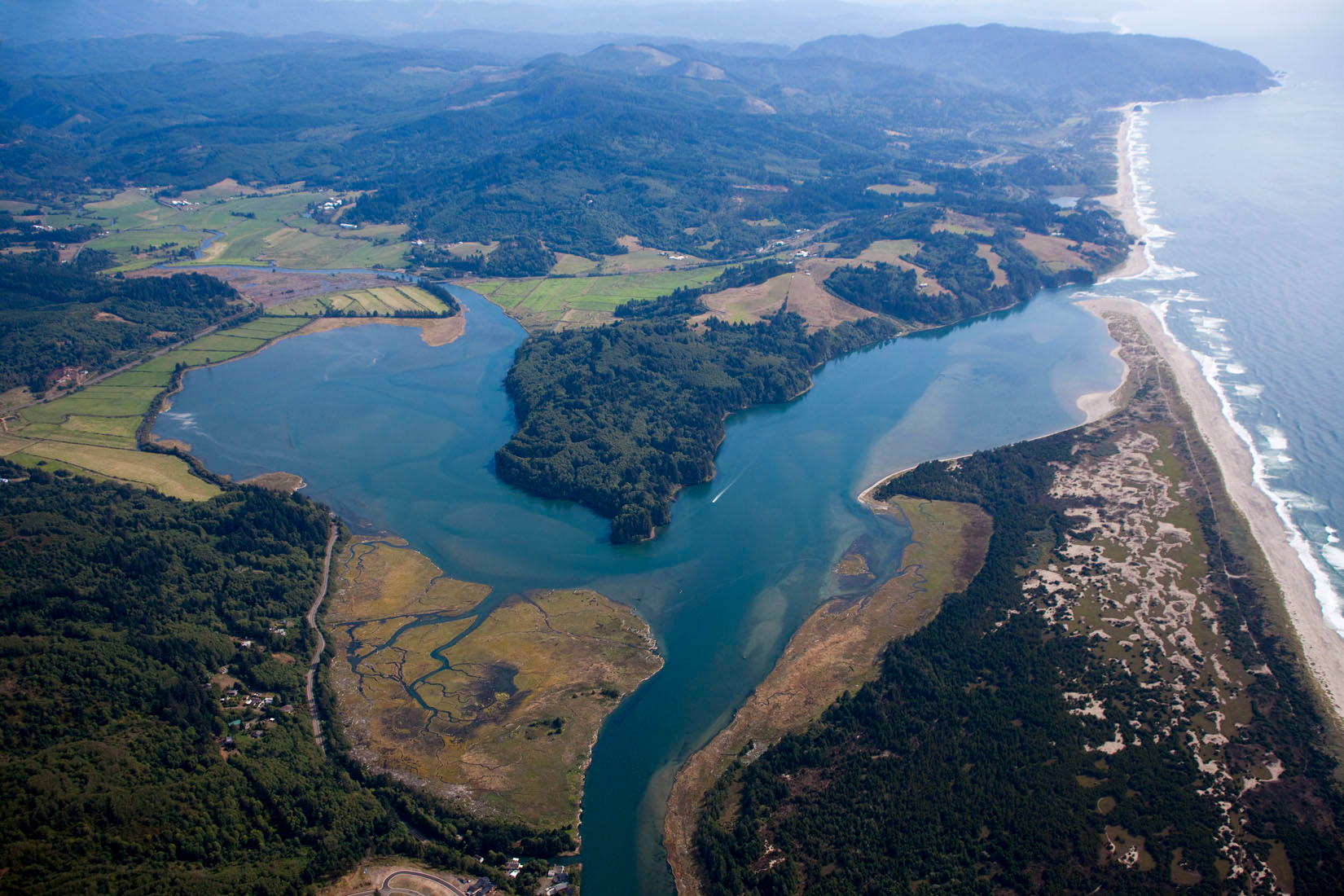 Nestucca Bay is one of two places where conservationists will attempt to establish new populations of Oregon silverspots this year. Photo courtesy of the US Fish and Wildlife Service

They started small—clearing the reed canary grass patch by patch and replanting with native grass, nectar plants, and violets. Along the way, Chuck and her collaborators have exhaustively documented what works and what doesn’t, figuring out their methods as they go. Recently they carried out a controlled burn on the site, because the native grass they’d planted had become so successful that they had to stop it from outcompeting the flowers. “If something doesn’t give us the result that we want, then we’re not doing that again,” she says.

A mix of refuge staff, volunteers, school groups, and nonprofit partners has carried out the hard work of restoration at Nestucca Bay. Inmates at Coffee Creek Correctional Facility, the women’s prison two hours inland that provides the violet leaves and nectar plants for the zoos, also grow many of the plants used at the wildlife refuge, receiving training in horticulture while contributing to conservation efforts. The Pelican Brewing Company in nearby Pacific City has sold a special Silverspot IPA to raise money for the species.

Long term, the best way to protect the butterflies from climate change is to establish populations at a range of elevations and latitudes, preventing adverse weather in any one spot from wiping out the species. Chuck and her colleagues received a grant to accelerate their restoration work and are finalizing plans to release a small experimental population of silverspots, drawn from the pupae Lewis rears at the zoo, both at Nestucca Bay and at another site called Saddle Mountain this coming summer. 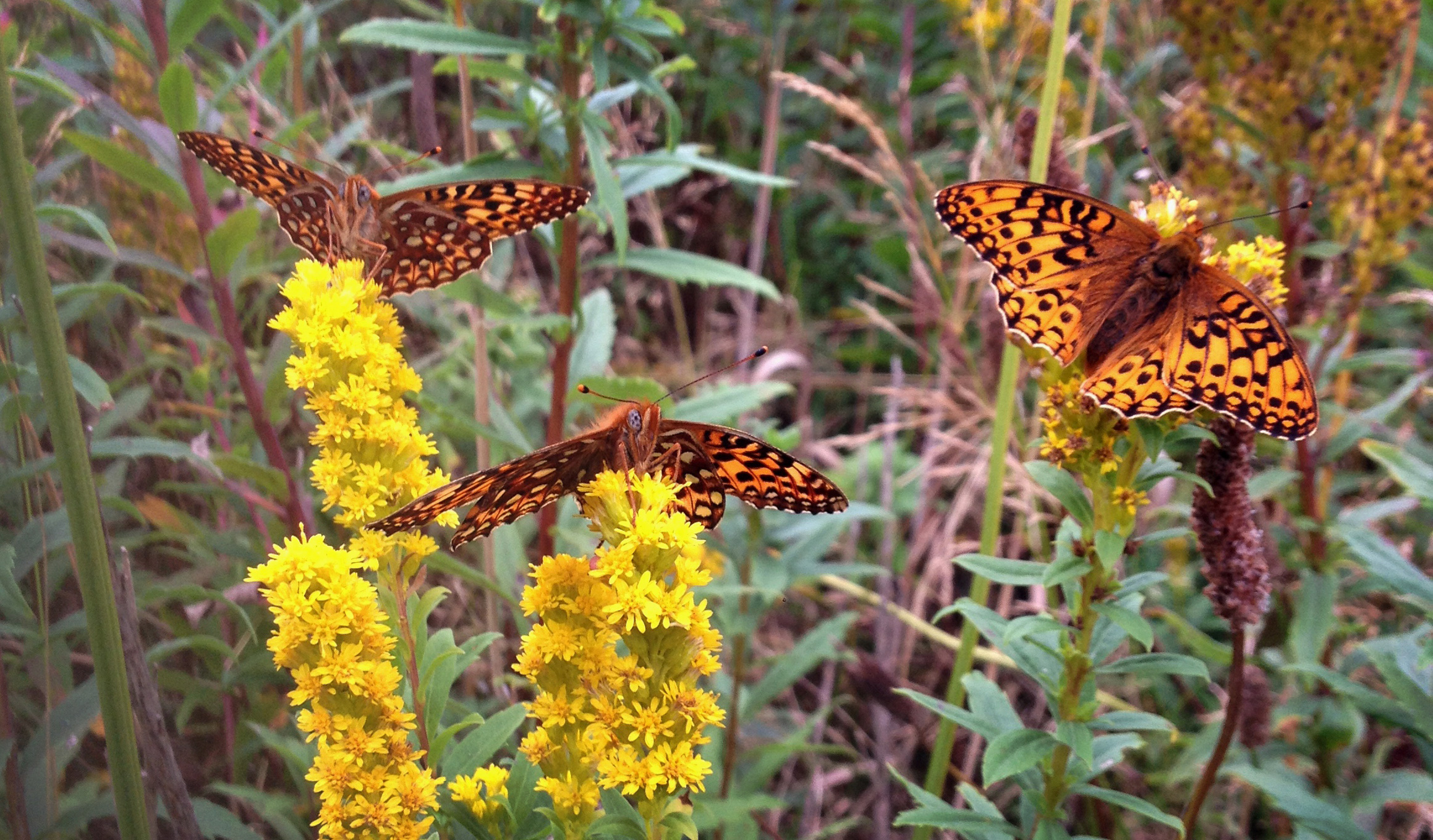 Despite the challenges involved, Chuck is hopeful about the butterflies’ future. With luck, she believes, the lessons from the trial-and-error restoration at Nestucca Bay can be applied elsewhere to create more viable habitat.

Back at Mount Hebo, each garnet-colored, jewel-like pupa gleams in its compartment in the release cage. Inside, the alchemy of metamorphosis propels them toward what’s next. When the adult butterflies emerge into the ocean-scented air, they’ll have about three weeks of life in which to search for early blue violets to lay their eggs on. As they seek to perpetuate their species for one more generation, they’ll carry the hopes of many on their wings.