Gambian fishermen are hoping an eco-label will help secure their livelihood. Photo by Jon Hicks/Corbis

A silvery fish with a yellow forked tail lands on the sand, and immediately a little hand grabs it. The boy, maybe five or six years old, weaves through a convoy of porters carrying basins full of fish and trots to the water’s edge. There he washes off his prize, a fish known locally as bonga. Out to sea a short way, a long wooden canoe rests at anchor while fishermen unload their catch into the porters’ basins. The muscular youths, up to their waists in the surf, balance the loads on their heads and then run from the sea and across the sand, trailed by kids ready to scoop up anything that tumbles out. Women await the catches with wheelbarrows lined up at the top of the beach. Here in Tanji, as in the other fishing communities dotting The Gambia’s tiny 80-kilometer coastline, women prepare the fish for market, smoking or drying them, so they will last for months.

In the midst of this activity, a crate lying on the sand holds a pile of especially ugly fish. They resemble flattened tongues, and their faces are twisted out of shape, an adaptation to swimming on their sides. Both of their eyes are on top, staring skyward, while their crooked mouths curve downward. Certainly unlovely, these red and black sole are undervalued by Gambian fishermen, too: prices are low, largely because locals prefer meatier fish that a family can share from the same bowl at dinnertime.

Yet these mostly unwanted sole may transform fishing in The Gambia. They lie at the center of plans to create the first artisanal fishery in Africa certified as “sustainable” by international eco-labeling standards. To make it happen, the government has taken the bold step of giving fishermen an equal stake in running the fishery. Now, Gambians are realizing a host of benefits on the way to certification.

The Gambia has one of the shortest coastlines in Africa, but its fisheries still provide food for Gambians far inland, and convoluted trade networks export dried fish to neighboring countries. Somewhere around 1,700 family-owned boats provide the catch. Fishermen motor offshore in canoes with outboard engines and dip their nets into the Canary Current, a swirling torrent that sweeps along the West African coast. It draws up deep, nutrient-rich water and triggers a seafood bonanza, comprising everything from barracuda and mackerel to stingrays, cuttlefish, and enormous sea snails.

Even with productive seas, Gambian fisheries have been struggling. A few decades ago, fishing was easy from traditional sailboats and dugout canoes. Things began to change when the government introduced a national development program aimed at increasing fishing effort and exploiting this bonanza. 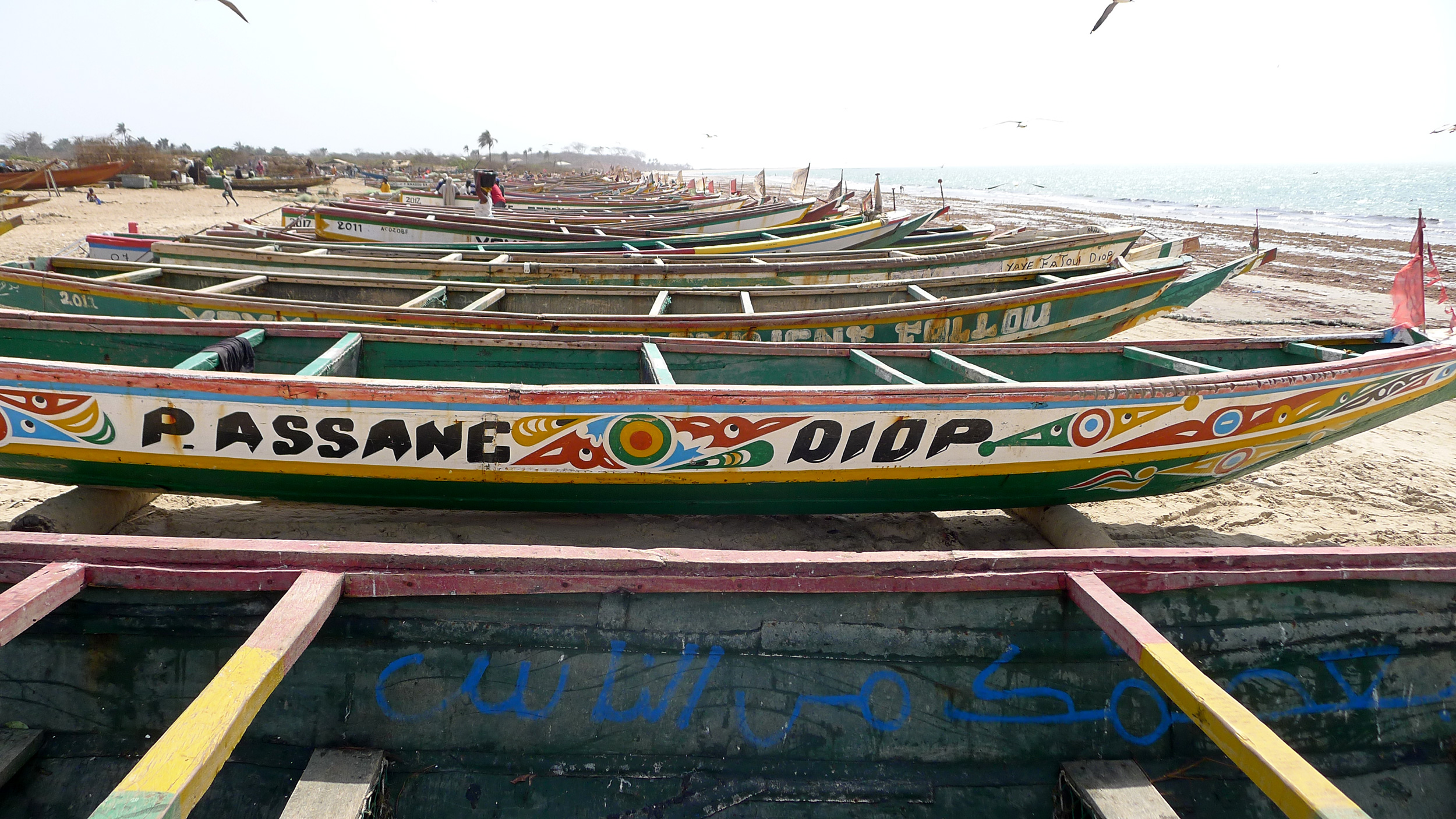 Fishermen in The Gambia ply their trade in these colorful open boats. Photo by Helen Scales

The national policy enabled fishermen to build bigger boats and buy motors, forgoing paddles and sails. This increased catch size and put fish stocks under pressure. Coincidental with this was the problem of fishermen moving in from surrounding areas. Some large, foreign trawlers ventured illegally close to shore, tearing up fishing nets and whisking away the locals’ future catches. Gradually, fishermen had to venture farther from shore to make a living. Back on land, the growing fishing industry spawned corrupt middlemen, who fixed prices and controlled access to processing plants and the wider marketplace.

The path to certification began in 2008, when a local group called the Gambia Artisanal Fisheries Development Agency had an ingenious idea: get local fish eco-labeled. With such a multitude of problems, a label wasn’t a cure-all, but if the fishing industry improved its eco-credentials perhaps it could open new markets, improve cash flow, and secure the fisherfolks’ livelihoods. So the agency approached the Marine Stewardship Council (MSC), a United Kingdom-based nonprofit that bestows coveted eco-labels. Worldwide, MSC’s blue stickers denote fish from fisheries that have minimal environmental impact. (MSC certifies around 10 percent of the world’s wild fish catch). An MSC eco-label could open the way to Western supermarkets, where demand for sustainable seafood is rising.

All the local group had to do was create a sustainable fishery—not as easy as it sounds. The group asked MSC which fishery would be the best and was disappointed when the initial assessment concluded with bad news: none of The Gambia’s fisheries met the MSC’s standards. It wasn’t clear, for example, whether threatened species were being caught. Yet despite all the troubles, it turned out that the MSC’s standards weren’t too far out of reach. In fact, fisheries for two fish species—black and red sole—were close. Fishermen commonly pull these underrated fish from nets when targeting other species, such as the more valuable catfish. An eco-label could make the plentiful sole by-catch a more welcome sight along the coast. Western palates already appreciate this thin, twisted fish, and Gambian sole aren’t currently being heavily overfished. The MSC’s main concern was lack of oversight. To merit the sticker, the fishery needed monitoring so stocks remain healthy.

To keep momentum going, the Gambian government supported the eco-label bid, seeing it as part of plans to fix deeper-seated problems in coastal fisheries. They partnered with international researchers under a project dubbed BaNafaa (from local words meaning “gift of the sea”). Everyone involved in BaNafaa agreed early on that local fishermen would share ownership of the sole fishery with the government through a syndicate of local committees, one from each fishing village. Fisheries fall firmly under government control, making power sharing an unusual, but not unprecedented, arrangement: in adjacent Senegal, a co-managed octopus fishery doubled in size after a few years. With its short coast, The Gambia had an opportunity to roll out a co-management initiative across the nation’s coastline. But would it work?

Fishing in The Gambia may be on the brink of a boost if efforts to eco-label wild-caught sole are successful.

A group of around 30 men, young and old, sat in the shade of a beachside tree in a village outside the Gambian capital, Banjul. It was 2012, early days in the eco-labeling initiative, and they were discussing this new fishery approach.

“Togetherness is oneness, and it is beautiful.” These and similar words in Wolof (one of West Africa’s main languages) drifted through the air, reflecting how glad everyone was to come together and talk about the resources underpinning their livelihoods.

Dawda Foday Saine, standing tall and slim in jeans, lace-up shoes, and a crisp white shirt, with his even-handed manner, convened this meeting of fishermen and fish processors, smokers, and traders. He is Executive Secretary of The Gambia’s new National Sole Fishery Co-Management Committee (NASCOM), the co-management initiative kick-started by BaNafaa. Saine, who has managed Gambian artisanal fisheries for more than a decade, is an original advocate of the co-management deal. Back in 2012, he traveled the coast, meeting local people involved in the fishery, discussing plans, and recruiting committee members.

BaNafaa proposed a straightforward co-management plan: only coastal communities can catch sole. Meanwhile, local fishermen manage the sole stocks. In Banjul, and elsewhere, almost everyone Saine has met supported the plan, and many echoed the sentiments of wanting “one voice”—and for good reason. 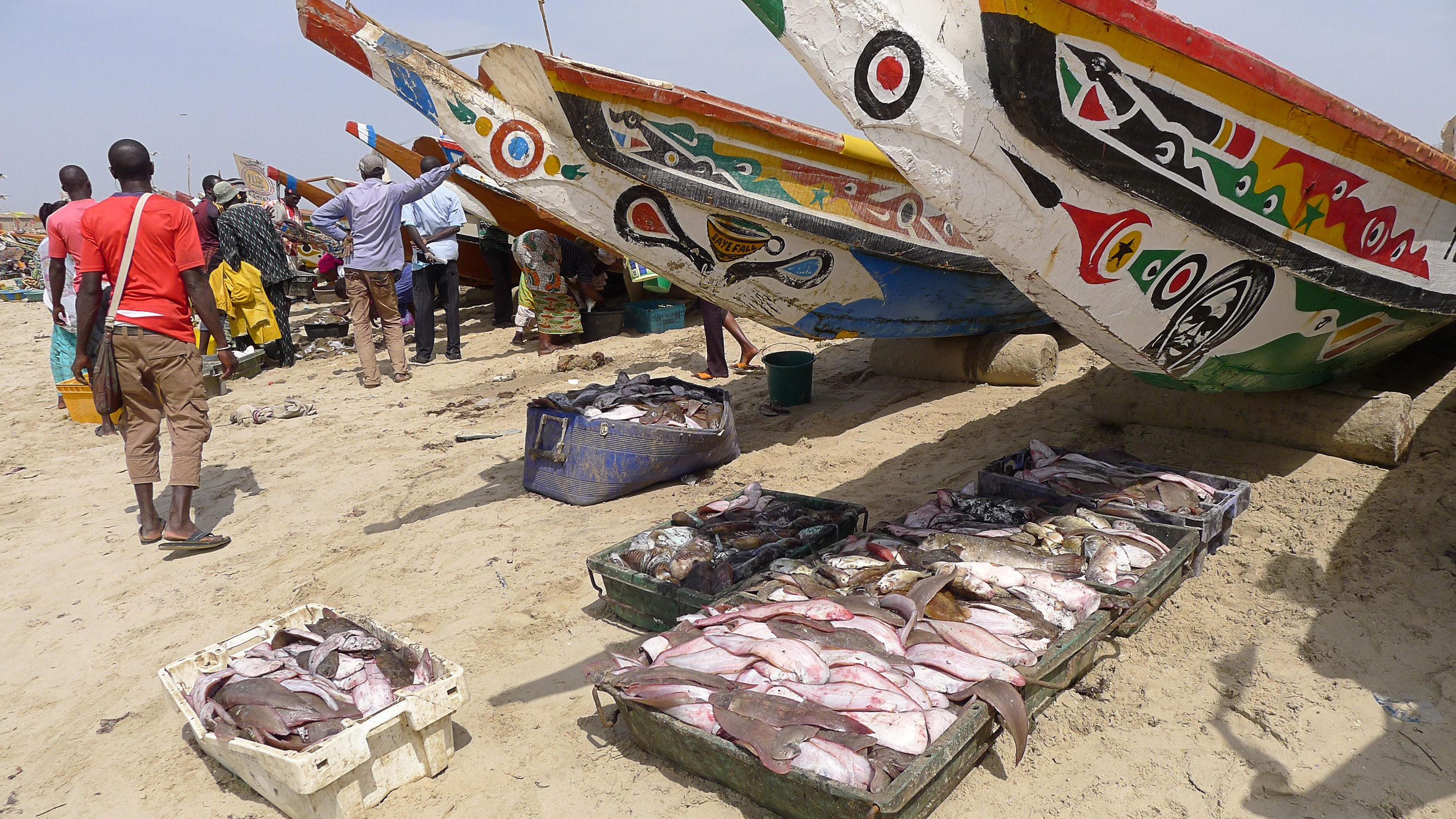 Fishing boats and crates of fish on the beach in The Gambia. Photo by Helen Scales

Previous attempts to help Gambian fisheries often failed. Ghosts of past projects, including rusting trucks and defunct ice-making factories donated by international agencies, haunt the coast. Some need expensive foreign parts for repair; other machines broke down permanently in hot, humid West Africa. The biggest, whitest elephant of them all looms in Bakau village: a metal pier stretching hundreds of meters out to sea, built 20 years ago with Japanese funds.

“It’s designed for trawlers, but the sea is too shallow here,” Saine says. The pier is too high and quite dangerous for smaller boats. “The fishermen have never used it.”

The government’s decision to involve the fishermen comes from hard-won knowledge that solutions imposed from outside tend to fail. Saine needs the fishermen involved in BaNafaa from the start. Aided by newly strengthened legislation and funding from a European supermarket to buy patrol boats, NASCOM and the local committees can now pursue and prosecute poachers. Proceeds from fines go back to the fishing communities. Beyond their role in the co-management committees, fishermen are also lending their intimate understanding of the coast—information gathered and passed down through generations, but just as useful as scientific studies. This oral history is helping design fishing regulations, including the cornerstone of the sustainability plans—a protected zone.

On trips to sea with BaNafaa researchers in 2010, local fishermen identified areas where sole are found and explained how the fish migrate inshore to breed every year. The fishermen themselves proposed a “no-take zone” to protect these spawning grounds. The no-take zone was one of the initiatives Saine discussed with the fishermen outside Banjul.

“If you kill one fish with eggs, you kill a thousand fish.” Saine heard this phrase—a mantra, almost—many times from fishermen along the coast, who all seemed in favor of the no-take zone. They ultimately decided it would span the entire coast out to about two kilometers from May to October each year, encompassing the area where most spawning sole are found.

Seasoned fisheries scientist and BaNafaa’s project manager, Ousman Drammeh (who sadly passed away in 2013), appreciated the importance of involving local communities. “They were not pushed into it,” he said at his office near Banjul. “And once they make their own law, there’s a tendency that they will accept it.”

Three years on since the no-take zone began and benefits are already emerging. Fishermen are catching larger sole, and other species are returning after long being scarce or absent. Benefits are even spilling into other sectors—fishermen are catching bigger lobsters, too. And all this before MSC has decided about the eco-label.

Scientists at the University of Rhode Island (and BaNafaa partners) recently conducted the second pre-assessment for MSC, and if the results are good, they’ll do a full assessment. “It has to stand the test of time,” Ousman Drammeh said in 2012. But “for small Gambia, this will be a huge achievement.”

Whatever happens next, the eco-label’s incentive has brought Gambian fisheries a long way—socially, economically, and ecologically—with the unlikely sole, and their doleful frowns, recast as stars of the coast.