Rule number one: lean the opposite way from your partner, unless you both want to take a swim in the tepid Mystic River. While one person reaches over the side of the canoe and swirls a batch of bright green leaves like spaghetti, the other keeps the boat balanced. Then the person leaning over the gunwale yanks up the plant and tosses it into a basket. This is how you save the river.

I listen to the directions while standing on a sunny riverbank with my husband and in-laws, along with a few dozen other volunteers in Massachusetts. Eight kilometers southeast of us, this waterway finds Boston and empties into the Atlantic Ocean. The Mystic inspired the song “Over the River and Through the Woods” as well as one of those Hollywood movies where everyone fakes a Boston accent, but today we’re seeing it under siege—from a plant.

It’s midsummer, the height of the growing season for invasive water chestnuts (Trapa natans). Hardy green carpets of Trapa natans are a menace: they block sunlight to life below the water’s surface; reduce oxygen in the water, killing fish; and clog waterways, imprisoning boats.

Where I stand is ground zero for the North American invasion. Volunteers are a major part of the fight against that invasion, taking matters into their own hands like the minutemen who organized here in the 18th century and expelled British rule. In our case we’re expelling an occupying vegetative force from Eurasia and Africa. Yet I’m uncertain why we’re here. Is this a war that’s winnable—or even worth fighting?

The Mystic looks bucolic from shore—lily pads float on the surface; a heron flaps away—but up close things seem a little off. A smell like a dank basement corner rises from the water. Fronds of Eurasian milfoil, another invasive plant, hiss against the bottom of the canoe.

After a while on the sun-warmed water, I pull off my sopping gardening gloves and continue with bare hands. Each Trapa natans plant is a glossy rosette, as big as a dinner plate, of toothed, triangular leaves. Underneath, air bladders keep it afloat. Patches of slime line the plant’s thin stem, which stretches roughly two meters to the river bottom. One firm tug and I pull a plant, hand over hand as if hauling up an anchor, into the boat. The plants have only been growing for less than a season—Trapa natans is an annual. They have risen from watery depths, year after year, for almost a century and a half. 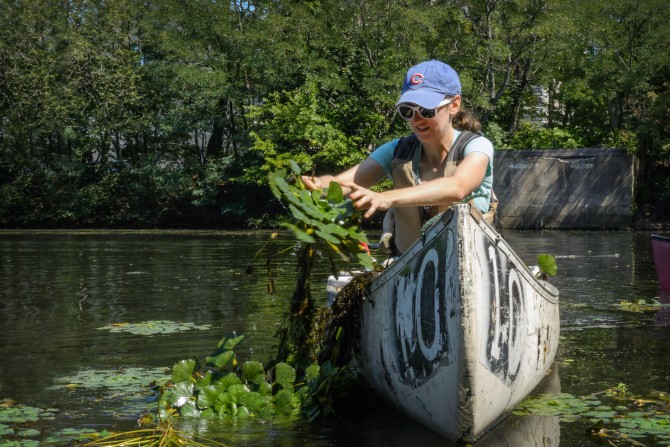 In 1877, the plants were being cultivated in famed botanist Asa Gray’s artificial ponds at the Harvard Botanical Garden in Cambridge, one town inland of Boston. Another botanist, George Davenport, reported that the plants escaped when a gardener threw some water chestnut seeds into a few local bodies of water. Davenport himself carried seeds to the town of Concord, about 22 kilometers northwest, and likewise tossed them in a pond.

Several years later, in 1879, Davenport was receiving reports of water chestnuts around the Boston area. He realized where they had come from. “But that so fine a plant as this, with its handsome leafy rosettes … can ever become a ‘nuisance,’” he wrote, “I can scarcely believe.”

I can see how the cheery rosettes charmed Victorian-era botanists. But beneath the attractive surface lie the chestnuts themselves—a spiny, ugly secret (until you grasp one and get stabbed).

The nuts have four knife-like spines. Trapa comes from Latin for “caltrop,” a spiked metal weapon Roman soldiers threw on the ground to stop an advancing enemy. No matter how it landed, one point always faced up, threatening the hooves or wheels of invaders, much in the way a water chestnut’s spines endanger its human attackers.

Each rosette bears 10 to 15 nuts, which may stay viable in the muck for a decade. At this point in the season, the chestnuts are heavy and dark, almost ready to fall off the plants and sink to the river bottom to launch the next generation, spawning colonies near and far.

Five years after George Davenport dismissed concerns about the water chestnut, it was near Scotia, New York. It had reached further south, in the Chesapeake Bay, by the 1920s, and appeared around the Great Lakes in the 1950s. They’ve been quick to disrespect borders in general: the plants have migrated north to the Ottawa River, spreading into Ontario and other waterways in Quebec, their enthusiasm for new habitat overwhelming native plants. Ironically, habitat loss and degradation has made Trapa natans rare and nearly threatened in its native Europe.

Here, at ground zero, the water chestnuts thrived. By the 1990s, the invaders blanketed the Charles River, which winds through almost 130 kilometers of eastern Massachusetts before meeting up with the Mystic in Boston Harbor. The first battle of the American Revolutionary War began with British soldiers traveling along the Charles in boats before marching northwest. If the troops had tried to travel the river in the 1990s, their whole battle plan might have gotten tangled along with their boats.

To break the stranglehold on its waterways, the Massachusetts state government spent in the ballpark of half a million dollars on mechanical harvesting. The largest harvesting machines resemble tractors with cutters and conveyor belts on the front; they paddle along the river and chew up plants as they go. A smaller machine, called a hydro-rake, is like a floating backhoe with an arm that reaches to scoop up weeds.

The harvesters in the Charles sucked most of the river clean in the 1990s. Then government funding vanished. When the machines crawled out of the water for good, the weeds rushed back to fill the void.

It’s hot in the canoes. We sweat beneath our life jackets as we paddle, reach, and haul in plants. But there will be no water breaks until we get back to shore; we were forbidden from bringing water bottles on the boats in case we accidentally ingested a splash from the river.

I ask Patrick Herron about this later. He’s Deputy Director at the Mystic River Watershed Association. The cities and towns around here have old infrastructures, cracking and leaking under our feet. Storm water pipes feed the water chestnuts, and provide escort for waste from other pipes. The truth is, Herron says, “There’s a certain amount of sewage that makes it to the river.” Our own sewage, rich in phosphorus and other nutrients, nurtures an edible crop we can’t eat. Trapa natans (unrelated to the Chinese water chestnut) is cultivated in parts of Asia and roasted and ground into flour or used medicinally to treat fevers.

Roger Frymire, a volunteer who has probably pulled more water chestnuts than anybody but works on his own, was kayaking and sampling water from storm water outfall pipes when he first met Trapa natans in 1999. A retiree and kayaker with a passion for water quality, Frymire had been sampling water around Cambridge for years when he noticed patches of water chestnuts on a smaller creek that flows into the Mystic.

“And I thought, you know, if somebody pulls these maybe they’ll go away,” Frymire tells me on the phone. “If I had known what I know now then, I might not have done it.”

Before he could enter the green-carpeted theatre of war, Frymire needed multiple permits, from municipalities and the state. “It took me almost a year of hacking through the bureaucracy,” he says. By the time he got started in 2000, it was midsummer, and the meager plant patches of the previous fall had morphed into large, thriving colonies. In Blair Pond, which had the densest growth, he faced a solid sea of green spanning nearly the size of a downtown Boston city block.

But Frymire refused to retreat. He strapped a recycling bin to the front of his kayak and began filling it again and again with plants, forcing smaller populations in ponds, rivers, and brooks into surrender. On Blair Pond he could work 10-hour days—he was limited by how many bins he had, not time—for eight weeks straight. By his calculations, he removed six tons of water chestnuts, yet only cleared a third of the pond. “It was growing faster than I could pull it by the time I gave up,” he says.

Undeterred, Frymire returned the next spring with a new plan. “I was out there in my kayak before the plants even hit the surface. I’d reach under the surface of the water and grab ’em,” he says. It worked. The weeds withdrew, even in the pond that was their stronghold. By 2011, Frymire had completely cleared seven of his 10 target sites.

As Frymire waged his battle, the Charles River choked. With no government funding for machine harvesting, the Charles River Watershed Association took to hand-to-hand combat. In 2007, the first volunteers began to yank Trapa natans out of the Charles, says Julie Dyer Wood, the association’s Director of Projects. The humans could hardly keep up with the plants. “It was a fast treadmill that we were just barely hanging onto. Those were tough years.”

In 2010, the Mystic River Watershed Association started its own mechanical offensive on water chestnuts, with funds resulting from an ExxonMobil oil spill in the river. The Charles got its substantial state funding back in 2014 and the mechanical harvesters returned to that river; in one year, the plant’s territory shrank over 70 percent. On the Mystic, machines scooped up over 1,600 wet tons of material in 2014. 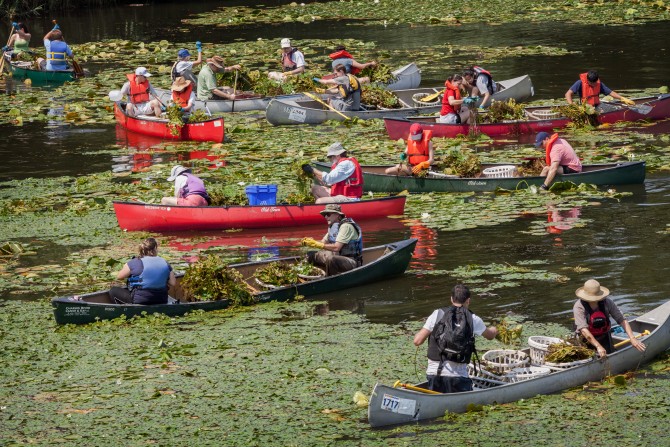 But volunteers in boats, hand-pulling, clean up the rogue plants that hide beyond the machines’ reaches, growing in shallow water or under low bridges. On the Mystic, I was part of a volunteer group numbering almost 1,000 in 2014, the strongest volunteer year ever.

Resistance is working, but no decisive victory has been declared, Herron says. While harvesting has cleared some areas, other sites downstream are filling with water chestnuts for the first time.

On the river, parents and children heap plants into baskets. Mud spatters arms and sunglasses and seeps into shoes. Canoes nose against each other while paddlers stretch to reach plants between them. My husband and I paddle to the drop-off site and pass our full baskets to workers on shore in exchange for empty ones. “Hey, you guys want to fill your boat in five minutes?” a man shouts to us from a canoe brimming with plants. “Go to the third bridge!”

To continue kayaking and canoeing in the rivers, volunteer worker bees are critical, says Anne Carroll, Director of the Office of Water Resources for the Massachusetts Department of Conservation and Recreation. So is the voice of the people: citizens helped bring the machines back in by petitioning their local representatives for funding. And maybe it’s time we stop feeding the river and our nemesis.

“Much like how in humans, you are what you eat,” Herron says, “rivers are determined by the land around them.” Leaking pipes and city runoff still infuse the rivers here with nutrients, boosting Trapa natans and other invasive species. Herron’s organization is urging the surrounding towns to reduce their runoff. “If it’s not this plant, it’s going to be the next plant.”

But for now, it’s the water chestnut. On our way back to shore for hand sanitizer and pizza, we canoe past a lone surviving rosette. I reach for it as we pass, trying not to lean sideways, stretching my fingertips as far as I can. Then I slide backward off my seat and land flat on my back in the muddy boat.

A burst of laughter comes from a nearby canoe. I regain my seat in time to see the water chestnut still safely in the river behind us. For today, it has the last laugh.