On a single apocalyptic day in 1755, Lisbon, Portugal, was hit with an earthquake, a tsunami, and destructive fires. Photo of 19th-century illustration by North Wind Picture Archives/Alamy Stock Photo

Not long after a Magnitude 8.5 earthquake felled the city of Lisbon in 1755, a distinguished man mounted a stallion and galloped through the ruins to reach the king of Portugal. The monarch, Dom José I, had narrowly escaped death by staying at his country palace outside the city. As someone who prized hunting and philandering far more than governing, the king was unsure how to restore his ruined kingdom. In a moment forever stamped into Portugal’s history books, the man on horseback, Minister of State Sebastião José de Carvalho e Melo, rode up. Sensing uncertainty in the air, he began barking orders at aides and swiftly commandeered the country’s recovery effort.

With the king’s blessing, de Carvalho—known to history as the Marquis de Pombal—went on to rule Portugal until Dom José’s death. (After the earthquake, Dom José suffered from acute claustrophobia inside buildings and lived the rest of his days in a palatial tent, serving as a figurehead while Pombal made strategic decisions.) Over his 22 years in power, Pombal would become a deeply controversial figure who used Lisbon’s destruction to force the religious country into the modern era. The Lisbon that arose after the earthquake displayed modern thinking about seismology, architecture, and disaster planning. Now, those innovations are helping the Portuguese people plan for another assault from the sea.

November 1, 1755, the day of the earthquake, had dawned like any other All Saints’ Day in Lisbon. Parishioners were attending mass and servants were home preparing holiday feasts. Roughly 300 kilometers away and deep on the ocean floor, the tectonic plates of Africa, Eurasia, and America meet at a geological hotspot. The Atlantic Ocean is quiet, seismically speaking, but that morning the plates slipped and released as much energy as 32,000 Hiroshima bombs. Tremors and waves rippled across the North Atlantic, raising rivers in Scotland and claiming lives as far away as Brazil. The worst hellfire was reserved for Lisbon.

Around 9:30 a.m., tremors rumbled beneath the city, ringing Lisbon’s many church bells in unison. Some people recalled a “horrible subterranean noise” right before the ground began to shake in a six-minute-long upheaval that crumpled cathedrals and buried neighborhoods. Within the hour, a six-meter tsunami plowed into the waterfront and killed hundreds who had gathered there seeking safety. Meanwhile, hundreds of small fires, spread by overturned cooking hearths and votive candles, were building into what would become a five-day firestorm. This last blow was the most destructive and razed what was left of the jewel in Portugal’s crown. 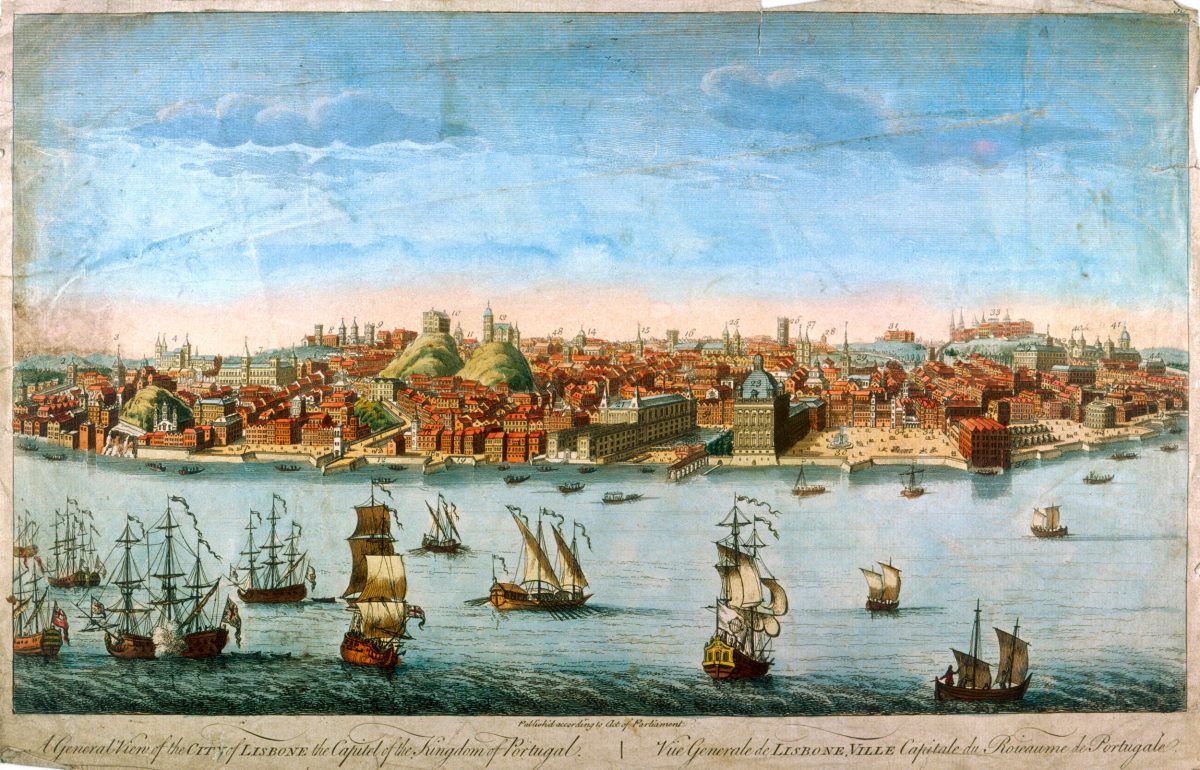 In this engraving, an artist has illustrated what Lisbon, Portugal, looked like just before the earthquake of 1755 struck. Photo of engraving by Chronicle/Alamy Stock Photo

The Great Lisbon Earthquake is the epitome of Portugal’s paradoxical relationship with the sea. For centuries leading up to the disaster, Portugal had grown fat on the bounty of a vast maritime empire that sprawled from Brazil to India—yet seafaring was generally reviled in Portuguese society and very little of the colonial spoils were invested back into the country or its citizenry. In a single day, the ocean leveled Lisbon, the empire’s nexus where much of the country’s wealth was stored in vast waterfront warehouses. One destroyed warehouse, the Casa da India, contained an estimated 1.5 percent of Portugal’s GDP in Brazilian diamonds. Lisbon’s devout Catholic population saw the ruined city as divine punishment. The Protestant countries of Europe also saw the destruction as punishment, but for backward Catholic behavior. Pombal, however, saw a path to power and an opportunity to rewrite the future of a crumbling colonial state.

With a team of military engineers, he imposed a gridiron design over the twisting medieval streets of the downtown Baixa neighborhood. The resulting orderly thoroughfare was not only elegant, it expedited evacuation in future emergencies and improved transportation, garbage collection, and sewage. Nearly two-thirds of Lisbon’s hodgepodge housing was wiped out during the earthquake, but a new Pombal-decreed building code introduced firewalls and a wooden frame called the Pombalina cage that swayed with seismic forces. The timber-framed structure, designed by his team of military engineers, could withstand small to medium earthquakes. In extreme shaking, a building’s facade might collapse, but the majority of the structure would remain intact. Pombal’s other forward-thinking efforts included building drains under city streets to counteract flooding. He directed workers to drive timber pilings into the city’s shifting sandy soil to secure building foundations and to build a protective foreshore along the Tagus River, which flows through the city and out into its brackish harbor. The new Lisbon took shape on top of the old—literally. During modern-day construction of the city’s subway, an archaeological team discovered that the earthquake ruins spread 10 to 15 meters deep. The demolished buildings raised the city’s foundations above the waterline and helped insulate Lisbon from a future tsunami. Today, Pombal’s innovations are recognized as some of the earliest efforts at disaster planning in urban design.

Before the earthquake, Pombal had spent years in England and Austria gorging on Enlightenment ideas, while the church and aristocracy ruled Portugal with brute medieval force. When Pombal assumed control, he followed the lead of other enlightened despots of the time—rulers like Catherine the Great who imposed reform from the top. He also had a brutal streak that flashed whenever the church or aristocracy tried to retake control. In one particularly ruthless retaliation for a foiled plot against the king’s life, he rounded up Portugal’s most powerful families for interrogation and, in a few cases, torture. He then publicly executed several members of the accused Távora family, banned the Távora surname, and renamed a river called Távora the River of Death. Such excessive force likely played a role in his unpopularity in both high and low society. When Dom José I died, Pombal was immediately ousted and banished by the king’s religious daughter. That still allowed Pombal two decades to institute innovative reforms that remain on display and studied today. 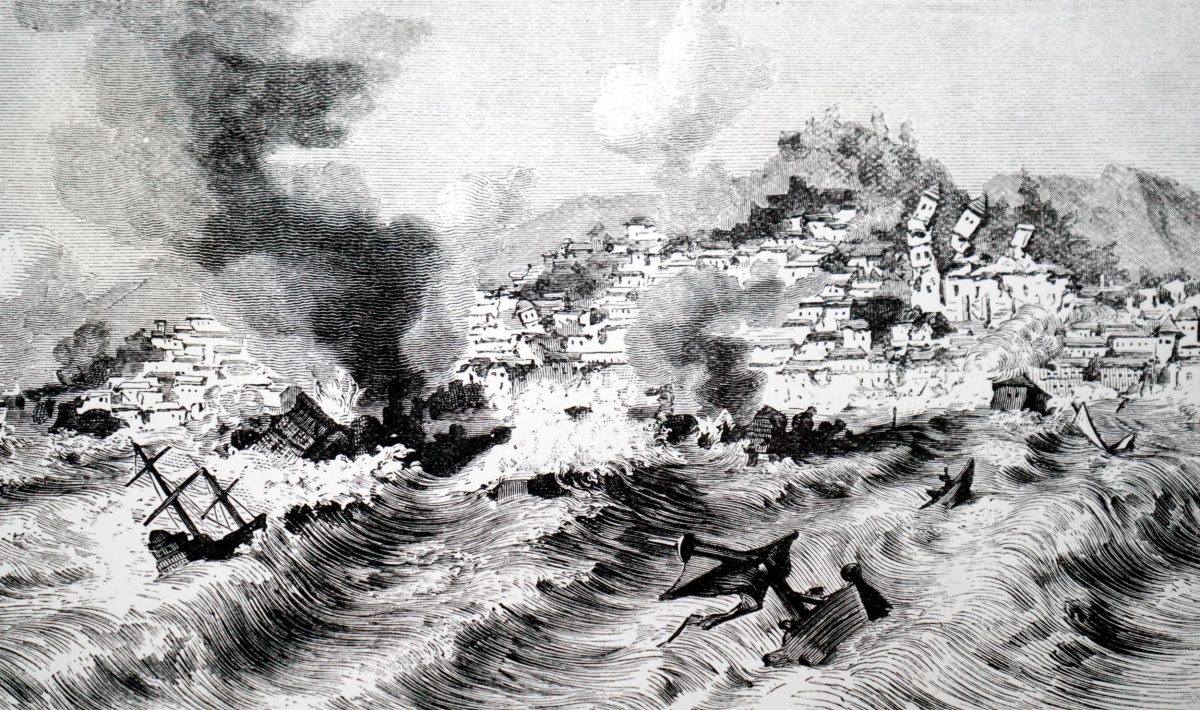 More than a century after the earthquake, an artist depicted the maelstrom in this wood engraving. Photo of engraving by World History Archive/Alamy Stock Photo

Maria Ana Baptista is a geophysicist in Lisbon who relies on Pombal’s work. For her doctoral dissertation, she modeled the 1755 tsunami using historical letters and poems, sermons, and scientific observations written around the time of the Great Lisbon Earthquake. The bulk of her data came from a survey that Pombal mailed to every Portuguese parish shortly after the earthquake. At the time, the questionnaire was striking because it made no mention of God. Pombal desired strictly factual observations, such as what time the earthquake began; how long the shaking lasted; and whether there were any abnormalities observed at sea or along the rivers and springs. The 646 responses that Pombal collected allowed Baptista, hundreds of years later, to illustrate how Lisbon was swamped by the sea.

The 1755 earthquake is known among scholars as Europe’s first modern disaster, so attracts attention even though most seismologists agree that it’s unlikely another transoceanic earthquake and tsunami like that will strike Lisbon. Baptista has also modeled other historical tsunami disasters in Lisbon, including a less powerful earthquake that struck directly below the city in 1531. She determined that this type of earthquake is more likely to reoccur and would be more destructive today. In either case, Lisbon is vulnerable.

In the Baixa district that Pombal rebuilt, the lessons of the Great Lisbon Earthquake are fading among its current residents. Very few Portuguese live in this gentrified neighborhood today; foreign workers and tourists dominate. A 2020 study surveyed the inhabitants and found that most would make the same mistake as their 1755 counterparts, running toward the riverfront and meeting an incoming tsunami. Although the original building facades remain, owners are permitted to tinker with the Pombalina cage inside, jeopardizing its structural integrity. As the city has grown, the riverfront expanded with the help of infilled sediment. During an earthquake, this unstable land will churn into liquid morass. According to Baptista and other researchers, Portugal’s tourist industry is to blame for stymieing disaster warning and preparation because it’s fearful of losing visitors and income. “We don’t have evacuation routes in Lisbon. We don’t have tsunami signs,” she says. “The tourism industry is only just starting to understand the importance of being prepared.” 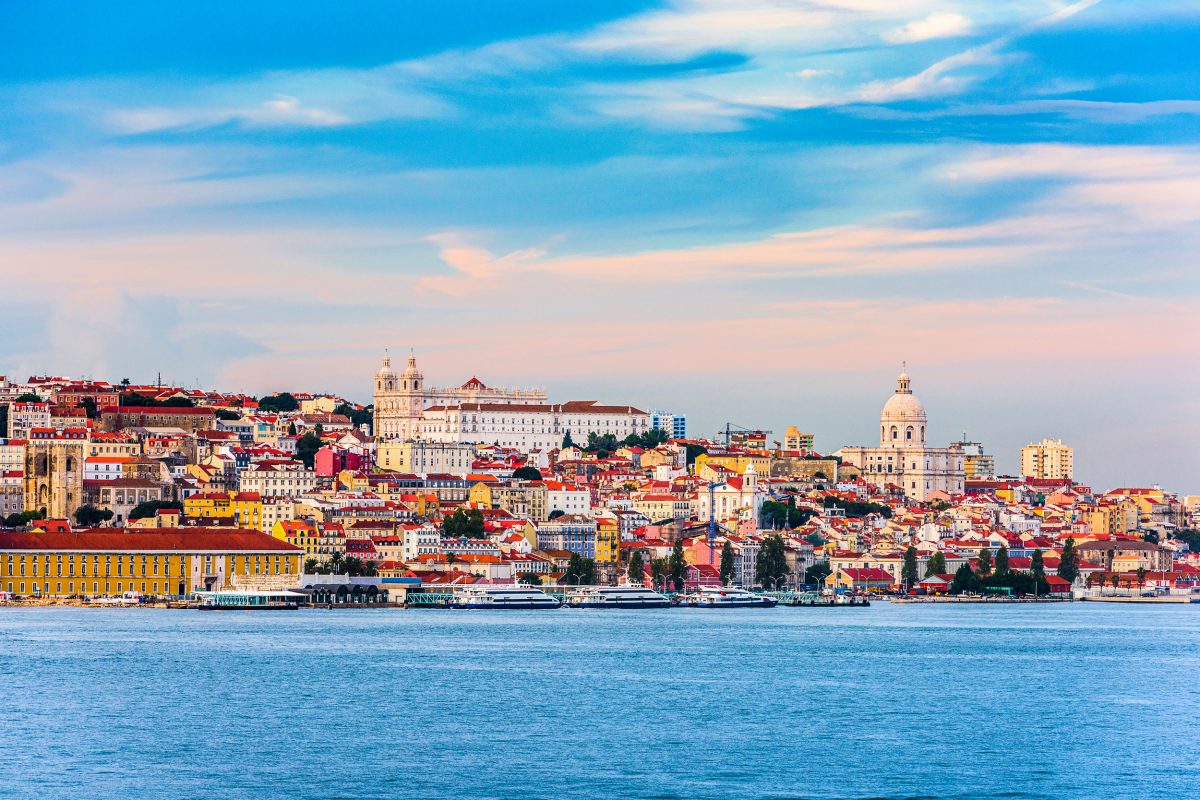 Not all of the Marquis de Pombal’s disaster-related changes to Lisbon have endured, but new technology may one day help the city in the event of another earthquake. Photo by Sean Pavone/iStock

The Pombal tradition of using science to safeguard Lisbon is still alive, if obscure. José Barros, a director at Portugal’s regulatory authority for the communications sector, is seizing an opportunity to build a new disaster warning system directly into the seafloor. By 2024, Portugal needs to replace fiber-optic cables that connect the mainland with the Azores and Madeiras islands. This ocean infrastructure runs right over the tectonic plates of the 1755 earthquake. Barros plans to integrate seismic sensors into the new cables, which would give Lisbon a few seconds of warning ahead of tremors. That might be enough time, says Barros, to stop trains or warn doctors to put their scalpels down. And it could provide locals with a few precious minutes to get out of a tsunami’s path. “The possibility of even a few extra seconds … that is important for every Portuguese,” he says.

Standing in Lisbon’s Praça do Comércio today, it’s difficult to imagine the suffering that washed through this beautiful waterfront square over the centuries. Slaves arrived here from Africa to be processed and pressed into work. Religious infidels were burned in savage autos-da-fé. In 1755, the six-meter tsunami swept away a terrified crowd. Then Pombal used the destruction as a springboard to craft Europe’s first modern city. Lisbon’s future, much like its past, seems tied to disaster and the innovation it sparks.