For those working to restore the salmon run in Douglas Creek, within Victoria, British Columbia, this dead fish represents hope for life. Photo by Shanna Baker

On a chilly January morning, four-year-old Eli Burger stands on the bank of Douglas Creek, on the outskirts of Victoria, British Columbia, hugging a dead salmon half as long as him against his red parka. He looks up at his father, Andrew Burger, who nods encouragingly. “Go ahead,” he says, “chuck it in.” Eli shuffles forward until his blue rubber boots touch the edge of the creek and heaves the fish as far as he can into the shallow water. It lands with a splash and drifts for a moment before settling against a boulder. “It’s floating!” Eli exclaims, his delight in the salmon’s buoyancy eliciting smiles from several nearby adults. For a moment, it’s almost as if the handsome coho could wriggle back to life.

Eli’s salmon is just one of 100 or so chum and coho carcasses that will land in Douglas Creek in a half-hour frenzy of activity this morning—lobbed, pitched, flung, plunked, or otherwise deposited by dozens of volunteers of all ages under the watchful eye of Darrell Wick, the man who has convened this gathering. None of the salmon will miraculously rise from the dead, but Wick is in the resurrection business.

Cofounder and president of the Friends of Mount Douglas Park Society, Wick also leads the group’s campaign to re-establish this urban waterway’s salmon population. The drive for river restoration in cities worldwide began a few decades ago with some high-profile results: in 2005, Seoul, South Korea, liberated a five-kilometer ribbon of water by demolishing a highway; and Los Angeles, California, has a specialized team within the mayor’s office whose sole job is rejuvenating the Los Angeles River, a process that began in 2002. But smaller communities with smaller waterways and a handful of volunteers have been just as diligent. The Friends of Mount Douglas began investigating the possibility of restoring the salmon run in their little stub of a creek in the mid-1990s. 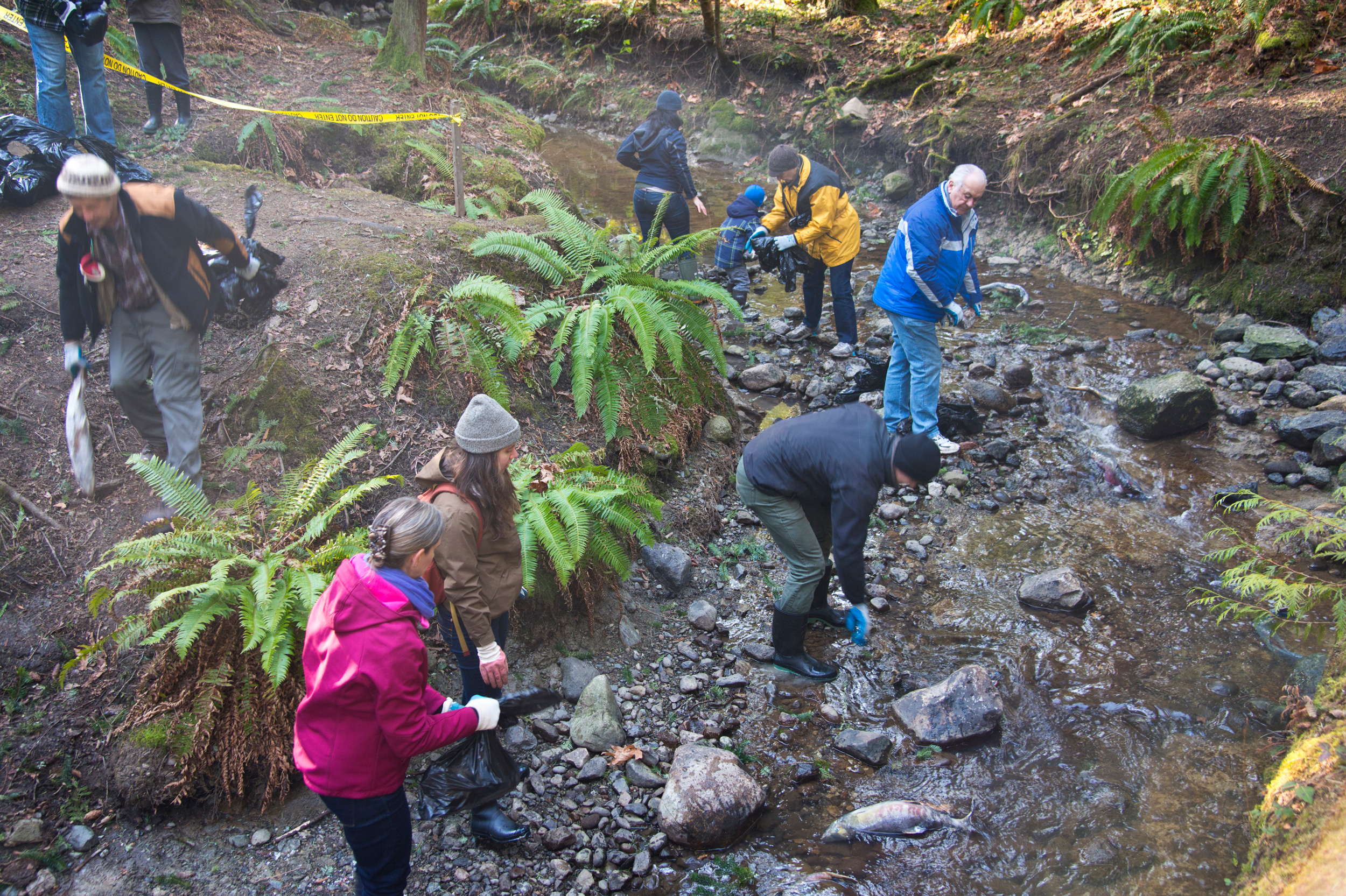 Volunteers place salmon carcasses in Douglas Creek in January, an annual tradition since 2002, though organizers skipped one year when no dead fish were available. Photo by Shanna Baker

Time has been unkind to Douglas Creek, which flows down the flanks of Mount Douglas—also known as PKOLS in the SENĆOŦEN language—and empties into the Salish Sea off southern Vancouver Island. Over the past eight generations, much of the creek’s 5.6-square-kilometer watershed (Vancouver’s Stanley Park is about four square kilometers) has been transformed from forest to farmland to suburbia. The upper reaches are now entombed in underground culverts and only the final 1.1-kilometer stretch, which lies within the forested enclave of Mount Douglas Park, ever sees daylight. Even this remnant has suffered much abuse. Pollution from roads, lawns, and residential oil tank spills is now largely curtailed, thanks to municipal regulations and the construction of a weir and settling pond at the head of the creek. But storm surges fed by runoff from paved surfaces and roofs still threaten the creek’s integrity, eroding its banks and scouring the channel.

Biologist Peter McCully helped assess the waterway’s potential. “We did a pretty significant inventory,” he says, “and the only thing we found was a scud,” a notably hardy little crustacean. “We didn’t turn up any fin fish, any amphibians, nothing.”

Most people would have given up at that point. The Friends of Mount Douglas simply got to work—just as they’re doing when I join them for their 15th salmon carcass transplant, an annual tradition (though they missed 2007, when no carcasses were available). The ceremonial casting of deceased and potentially putrid salmon into the creek is only one part of the process of creek rejuvenation, and it’s surely the most raucous, the most fun, and the most visceral. But luring life with death has deep roots in overlapping ecosystem management practices. For millennia, up and down the west coast, indigenous peoples ritually honored each year’s first-caught salmon, returning its carefully cleaned bones to the river. And scientists today recognize that a vibrant salmon creek needs an annual influx of dead fish for overall ecosystem sustenance and, more specifically, to provide a hefty meal for aquatic invertebrates, which in turn nourish juvenile salmon. Distributing dead salmon is now part of stream restoration programs in various west coast communities.

Before the carcass toss, Wick and I meet at an unmarked entrance to the park, off a cul-de-sac just up the street from his home. A short walk takes us into the shade of towering Douglas firs and cedars, and down a fern-lined path to the creek. “Yesterday,” Wick says, “I met a man who remembered being here in the early ’60s, when this creek was full of salmon and cutthroat trout.” Those days were gone by the time Wick moved to the neighborhood in 1973, but this vision of the recent past—and a possible future—hooked him and hasn’t let go.

Darrell Wick leads the Friends of Mount Douglas Park Society and is hopeful the creek will return to the salmon-friendly habitat it once was. Photo by Shanna Baker

Inspired by the old-timers’ stories, he and his group are intent on giving the creek a full makeover, restoring it to a salmon-friendly habitat that entices females searching for the perfect nursery with gravelly beds for eggs and protected pools where juveniles can eat and grow big enough to survive the ocean. This monumental repair job, supported by approximately CAN $95,000 of funding from the Pacific Salmon Foundation, has involved strategically distributing truckloads of gravel to create spawning habitat and cabling scores of massive boulders, tree trunks, and rootballs along the banks to hinder erosion. Work on the creek’s final section, a meandering 136 meters just downstream of the weir, will be completed this summer.

As early as 1997, the group was seeding the creek with salmon, releasing fry raised in local schools and at the nearby Howard English Hatchery. Five years later, they began the annual fish toss, with the hatchery providing the carcasses.

“Why on Earth would we put dead fish into a creek in order to try to get live fish back?” McCully’s question sends a ripple of laughter through the crowd that has gathered at the park entrance. Coffee and doughnuts, the dazzle of sun on the frosty grass, and the warmth of Wick’s opening remarks have put everyone in a relaxed and cheerful mood. An equal mix of grown-ups and kids, the group includes Friends of Mount Douglas members, Howard English Hatchery volunteers, municipal government politicians and employees, and curious neighbors. The veteran salmon tossers have heard McCully’s homily before, but they listen to the grizzly-bearded biologist—the hatchery’s technical adviser—just as attentively as the novices. 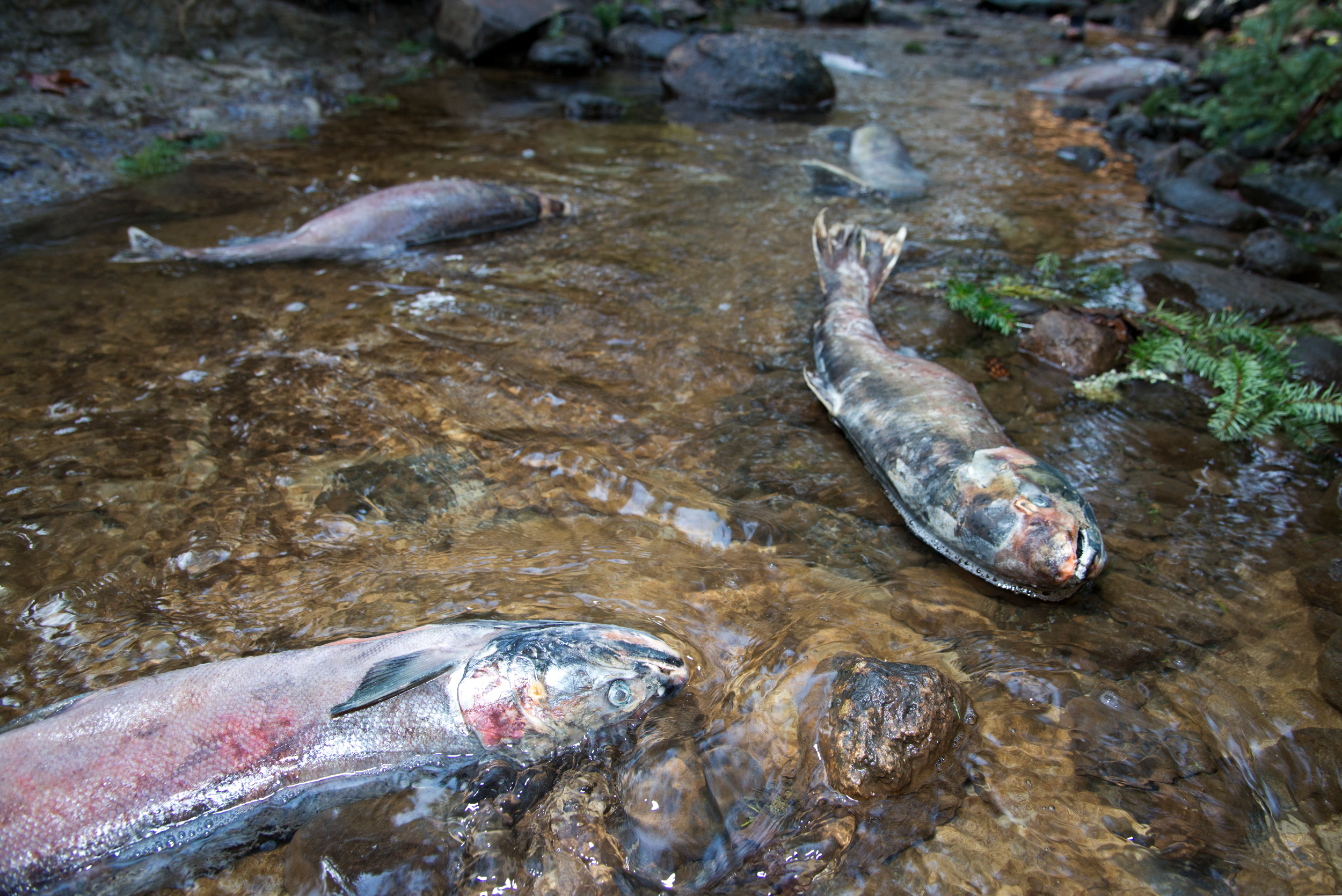 Pacific salmon, McCully tells the crowd, begin and end their lives in freshwater streams, but in between, spend one to seven years (depending on the species) in the open ocean. There, gorging on a banquet of small fish, krill, and other delicacies, they store up phosphorus, nitrogen, and carbon—vital elements that are limited in the west coast’s riparian ecosystems because heavy rains constantly wash them away. When the salmon return to their natal waterways for their one chance to reproduce, they bring the riches of the ocean with them. “They spawn, they die, and their carcasses degrade very quickly,” McCully concludes, noting that within a few months, “you’d be hard-pressed to find anything save maybe a jawbone, a few teeth, and the hard gill plate.” And as scavengers and decomposers reduce the salmon to bony scraps, the marine-sourced nutrients carried in their bodies fan out through the food chain. “The luxuriant trees we have on the west coast benefit from those nutrients. The next generation of juvenile fish benefit from those nutrients. It’s a tremendous recycling program—better than anything we could ever devise.”

The ecology lesson over—it’s time for action. After a few final instructions, Wick claps his hands like a race marshal firing the starting pistol. “Let’s go!”

The participants leap into action, hefting bags of dead salmon from the back of a pickup truck into wheelbarrows, pushing the heavy loads down the woodchip trail and then lugging the bags down narrow footpaths to the two designated distribution sites. Down at the creek, they rip open the plastic and pass the contents to those who are eager to deliver the bounty. Eleven-year-old Ingrid Riccius later tells me she got to launch three or four carcasses—excellent hands-on research for the speech on the salmon life cycle that she’s working on for school. “It was cool,” she declares. 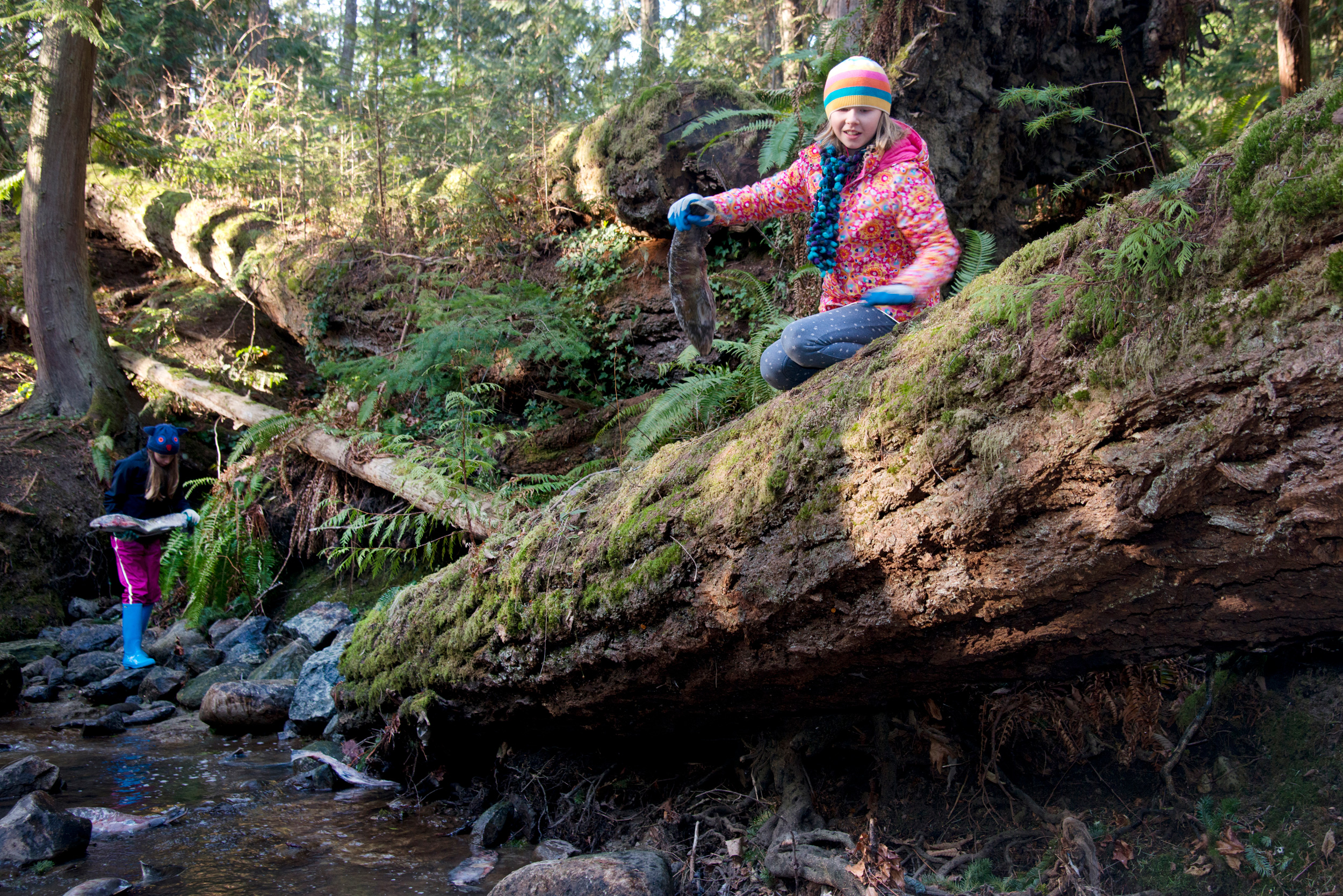 Ingrid Riccius, 11, is all smiles as she tosses a salmon into Douglas Creek. Photo by Shanna Baker

With the unseasonably cold weather, the carcasses have not thawed since they were taken out of the hatchery’s freezer almost a week ago. They emerge from the bags stiff as boards and glazed with ice, but as the water warms them, it burnishes their skin, highlighting their red and green markings. A faint fishy odor starts to rise from the creek. Paradoxically, the sight and smell of these dead fish makes the place seem more alive.

Douglas Creek is still a long way from being a self-sustaining salmon run, with enough fish returning and dying each year to fertilize the creek naturally. By McCully’s reckoning, children like Eli and Ingrid will be adults before the damage wrought by the previous generations is undone. But the progress so far is gratifying. In 2003, for the first time in decades, an adult salmon returned to the creek. This male coho “was lonely as hell,” McCully says, “but the fact that he came back at all was really encouraging.” Each fall since then, coho and chum have migrated up the creek to spawn, with some of them achieving their ultimate goal, the proof coming in springtime when fry emerge from the gravel.

Seeing the satisfied smiles as volunteers walk back to the parking lot, I realize that the ritual of returning dead salmon to the river is as important as the dead fish themselves. Just as the indigenous peoples’ First Salmon Ceremony reinforces respect for salmon, the carcass toss is a reminder to everyone involved that salmon are vital community members too, as precious in death as they are in life.