Daryl Fedje was feeling his age, kneeling in a waterlogged pit, trowel in hand, mud everywhere, water pooling a dirty brown in the low spots. It was a cold, gray April morning on the central British Columbia coast, with rain lashing the overhead tarp, and Fedje, an archaeologist at the Hakai Institute and the University of Victoria, and one of Canada’s leading researchers on the early human history of the Americas, was dueling with doubt. Still lanky at 62, with gray hair curling out from his ball cap, he wondered yet again if he was wasting time and hard-to-find money chasing a figment of his imagination.

Fedje had been thinking about EjTa4, and what he’d seen there, for almost a year. Situated on remote Calvert Island, the site sprawled for nearly 150 meters along the shore, its massive, vegetation-shrouded midden looming over the water and its long abandoned garden nestling at the base. The immense midden, comprised of shells and other refuse, hinted at an ancient occupation. So a year ago, Fedje and his close friend Duncan McLaren, a fellow Hakai Institute and University of Victoria archaeologist, decided to search for the site’s earliest layer, digging a small test pit below the tideline. They hoped to find a few stone tools or butchered bones. But when Fedje got to the bottom of the pit, he saw something strange: a black impression in gray clay. It looked like a human footprint.

McLaren took a photo, and, since time was running short, they filled in the pit and called it quits for the season. McLaren, however, thought the impression was worth another look. So in April this year, he and Fedje returned with a small team. After three days of digging through sand and gravel in a four-square-meter pit, Fedje reached the gray clay layer where he had spotted the strange shape a year earlier. The cautious scientist could scarcely believe his eyes. There wasn’t just one faint impression. There were 12. Two footprints were side by side, others pointed in different directions; they were all near a stone-lined hearth. “You could see individual feet, you could see the heel pads, the toes, the arch of the foot,” Fedje says. “It was just mind-boggling.”

Just when ancient coastal dwellers made these tracks is now the big question. A tiny piece of charcoal found in the first footprint yielded a radiocarbon date of 13,200 years before present, suggesting that humans walked the shore of Calvert Island not long after the last Ice Age ended along the coast. But other stratigraphic evidence indicates that the footprints could be more recent, dating to about 2,000 years ago. Fedje and McLaren are now trying to hone the chronology. But if the impressions are conclusively dated to 13,200 years ago, they will be the oldest known human footprints in North America. They would also be just 1,300 years younger than the oldest footprints in the New World, which were found at the site of Monte Verde in Chile during a dig led by Vanderbilt University archaeologist Tom Dillehay.

Already the new discovery is stirring excitement in the scientific community. Footprints are the impressions of living, breathing human beings, and they provide tantalizing glimpses of ancient people going about their daily lives—whether stalking game or gathering around a fire. Yet, according to Martin Lockley, director of the Dinosaur Trackers Research Group at the University of Colorado, and a leading authority on fossil human footprints, ancient impressions of human feet are rare, occurring at just 65 localities in the world. “We have thousands of dinosaur footprint sites, hundreds of bird and mammal footprint sites, but for humans, we are still looking at just a few dozen,” Lockley says. The new discovery on Calvert Island, Lockley adds, sounds “very interesting.”

For Fedje and McLaren, the significance of the unexpected find is just starting to sink in. “To see those footprints, it’s really evocative,” marvels McLaren. “It’s something we can all relate to because it represents a brief moment of time.”

On a sunny mid-May afternoon, McLaren leads the way across the shore at EjTa4, his heavy rubber boots leaving a trail of corrugated footprints. Sunburned and chapped, with wavy black hair flying off in all directions, McLaren looks a little weatherworn after three weeks in the field. But the 44-year-old is clearly in his element. He hustles up a 3.5-meter-high stepladder to the top of the site’s midden and spends the next five minutes effortlessly navigating a dense tangle of fallen conifers and gnarled tree roots before reaching a sheltered bay where sandpipers feed. Clambering down off the midden, he heads to Fedje’s now-covered pit. It lies right in the intertidal zone.

Not many archaeologists would choose to dig on a chunk of shoreline drowned daily by the tides. But over the past five years, McLaren’s detailed studies of the ancient environment on Canada’s west coast have revolutionized the way that he and Fedje search for early sites. Today, the two archaeologists regularly dig in wave-washed places where no one else on the west coast thought to look before—and they are finding plenty of sites. 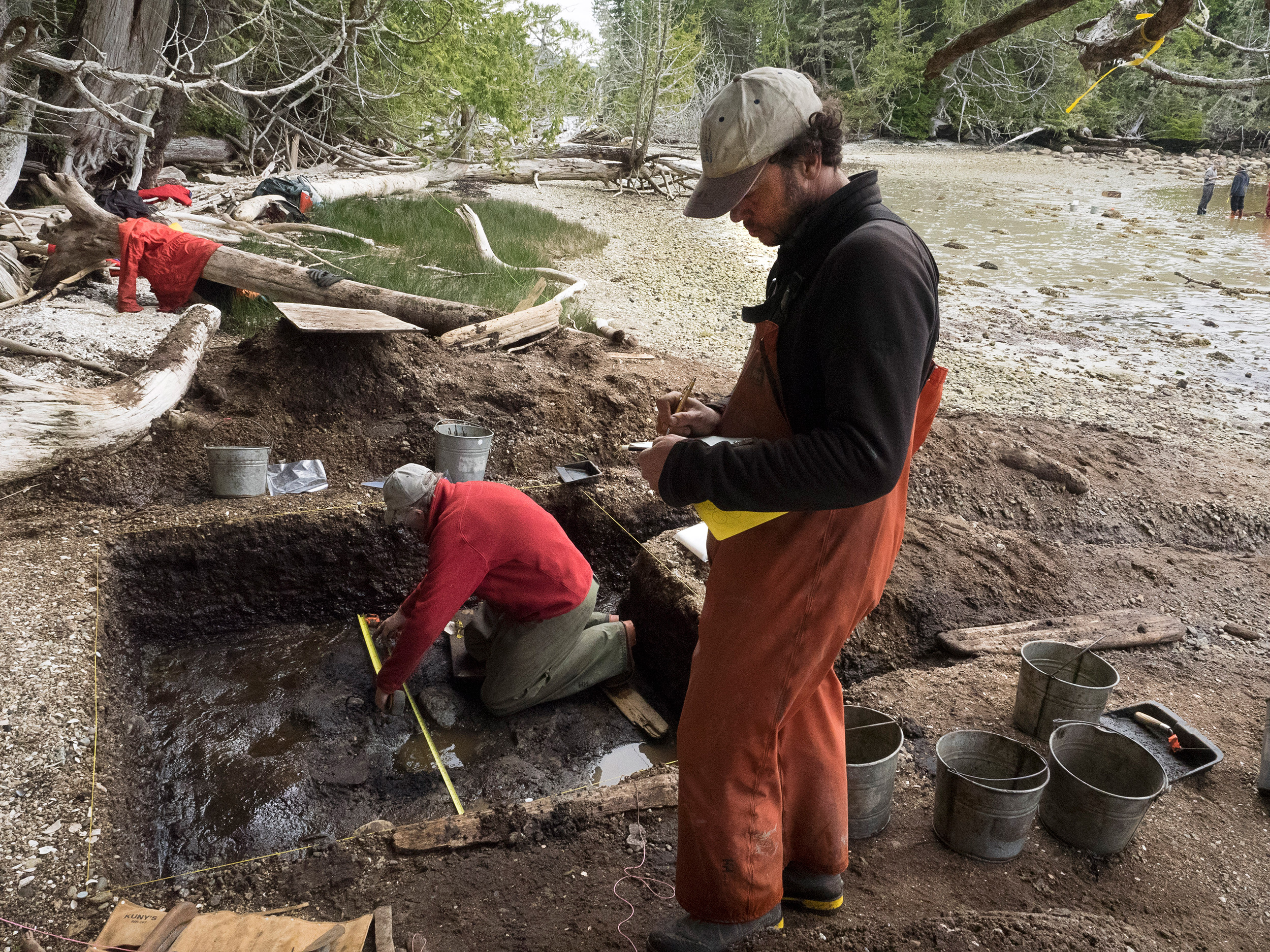 The key to locating sites turned out to be an understanding of ancient sea level changes. Some 17,000 years ago, near the end of the last Ice Age, massive ice sheets in the Northern Hemisphere began melting, releasing their water into the ocean and raising sea levels dramatically. In most parts of the world, vast swathes of coastline disappeared under 120 to 130 meters of water, taking with them many of humanity’s early coastal sites. But through detailed research on the central British Columbia coast, McLaren discovered that some areas had escaped this fate. In a region known as Hakai Passage, where Calvert Island is located, an uplifting of the Earth’s crust almost matched the rise in sea level. The net effect on Calvert Island was a sea level rise of just three or four meters over the past 15,000 years.

Armed with this knowledge, McLaren, Fedje, and their students are now regularly digging just below the tideline and finding early layers of ancient sites. “It’s sort of unconventional archaeology,” McLaren says in a classic understatement. “And it feels a little awkward sometimes.” The team has to time each day’s excavation to coincide with low tides, and they often use specialized equipment such as caissons around the pits to keep water out while they work. Even so, the researchers have to dig quickly to make the most of the short tide window. “It always feels like a rush,” McLaren says. But this unorthodox archaeology led directly to finding the footprints at EjTa4. 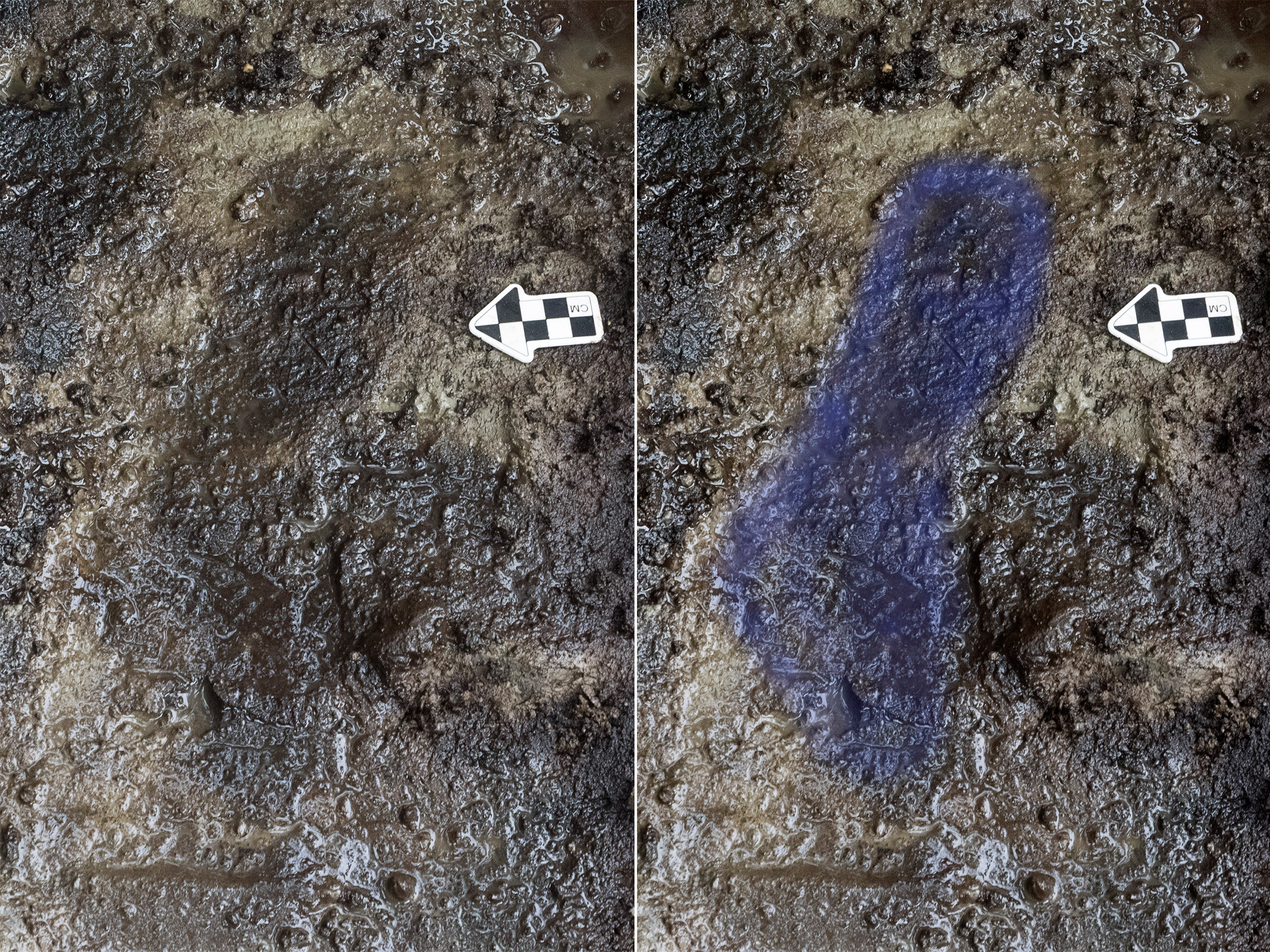 Stained blue through photo enhancement, one of the human footprints emerges from the waterlogged gray clay. Photo by Joanne McSporran

The early coastal people who left their tracks there, notes McLaren, were likely standing on a clay surface just above the high tide mark. In all, the team has found the impressions of at least three people. Judging from the measurements of the surviving footprints, there was a large adult, possibly a man, as well as a small adult, likely a woman, and a child whose feet would fit a pair of size 7 children’s shoes today. The latter discovery, says team member Jennifer Walkus, a researcher on traditional ecological knowledge at the Wuikinuxv First Nation, is especially “cool because so often kids are absent from the archaeological record. This really makes the archaeology more personal.”

McLaren thinks that the close proximity of the footprints to the hearth may mean that this group was standing or walking around a fire. And you “can get a quick picture of the kind of people who were there,” he adds. “What we have now kind of conjures up a nuclear family, with a child, all hanging out.” But that picture is likely incomplete. All twelve footprints came from an area only slightly larger than a queen-sized mattress, and several clues suggest that similar prints await excavation nearby. One of the exposed footprints, for example, seems to be heading in a northeast direction, away from the excavated area. 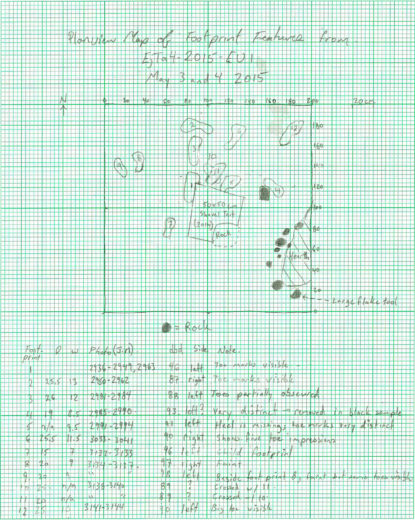 Duncan McLaren’s field notes show the position of each of the newly found human footprints on Calvert Island. Image courtesy of Duncan McLaren

Once the man, woman, and child left that stretch of shoreline, a black sand rapidly filled the impressions left by their toes and heels, followed by a thick layer of pea gravel. And although high tides eventually inundated the site, the black sand and pea gravel preserved the footprints for at least 2,000 years, and perhaps much longer, until the day Fedje and his colleagues arrived on the shore with their gear and began digging.

Fedje’s ability to make out one faint footprint at the bottom of a waterlogged pit, when most others would have seen only a black smudge, was remarkable. But Fedje remains modest. Archaeologists, he explains, are always looking for patterns—patterns in data, in artifacts, in the muck that lines an archaeological pit. Patterns, after all, are what help archaeologists separate the signal from the noise, the significant piece of information from all the background chatter. “We develop an eye for these patterns,” Fedje says, “and after walking up and down the beach a hundred times in the course of a week over multiple years, footprints in the sand get imprinted on you.”

The research of Daryl Fedje and Duncan McLaren is supported by a grant from the Tula Foundation, which also funds Hakai Magazine. The magazine is editorially independent of the institute and foundation.

Ancient Human Footprints Around the World

It takes a very specific set of circumstances to preserve something as delicate as a human footprint for thousands of years. First, a human being has to walk across a soft surface like mud, sand, or clay, leaving behind a three-dimensional impression. Then these footprints must undergo swift burial beneath sediments such as silt settling out of slow-moving water or volcanic ash falling from above. Often the overlying layers must then be worn away by just the right degree of erosion—enough to expose the footprints but not to destroy them. As a result, very old footprints are rare.

The earliest known human footprints date back some 3.7 million years. Discovered by the famous British paleoanthropologist Mary Leakey and her research team in Tanzania, the Laetoli footprints preserve the tracks of two, perhaps three, of our human ancestors—possibly Australopithecus afarensis, the same species as the famous Lucy—and they provide the oldest direct evidence of hominids walking upright as a matter of habit, not just occasionally.

Scientists have found ancient human footprints on every continent, except Antarctica. In the United Kingdom, for example, researchers have uncovered tracks of early hominids that date between 1 and 0.78 million years ago at the ancient mudflat site of Happisburgh, as well as the footprints of humans who suffered from arthritis and congenital bursitis—diseases that can affect one’s walking gait—at the 5500-year-old site of Formby.

In Australia, human travelers of varied ages, including a one-legged man, traversed a water-soaked lake margin some 19,000 to 23,000 years ago, leaving behind more than 120 footprints and creating the Willandra Lakes trackways. In South Korea, the 15,000-year-old footprints of hunter-gatherers recently came to light at a site on Jeju Island. And in Acahualinca, Nicaragua, volcanic ash fell on the footprints of 15 humans as well as the tracks of deer and opossum as they crossed the shore of Lake Managua, preserving them for an estimated 2,120 to 6,500 years.

On occasion, footprint sites are lost for decades and then found again. Near Cuatro Ciénegas in Mexico, someone discovered two ancient human footprints in 1961, but the location of this site was lost before it could be recorded. Nearly half a century passed before scientists managed to re-locate it and find another 20 human footprints as well as some poorly preserved animal tracks, including a possible duck footprint. Preliminary studies show that all the impressions are about 10,000 years old.