It was the twilight of the hippie era when a 22-year-old kid—raised far from the ocean—boarded a motorless sailboat in British Columbia to look for killer whales. The boat’s skipper insisted that silence was required for successful whale watching. During the two months at sea, one crew member fell overboard, the boat ran aground, and a storm played mischief with their supplies.

Despite the rocky start, the kid would go on to become the expert Warner Bros. Pictures called almost 20 years later when they were searching for a killer whale to star in an upcoming film, Free Willy. He would write the first whale watching guide. His visual presentations would bring the wonder of killer whales to Russian audiences. And he would watch in dismay as the roar of aggressive, high-powered whale watching boats threatened the sanity of the very animals that launched his career.

Though the quiet, engine-free journey was a little fraught, it was not based on hocus-pocus, mystical thoughts courtesy of the Age of Aquarius mentality of 1973. The boat’s skipper, a traditionalist at heart, had been onto something.

“We now know he was right,” says Erich Hoyt, the once-22-year-old kid. For these highly acoustic and social animals, a sea of noise drowns out their voices, undermining their efforts to hear and to be heard by each other. Today, Hoyt is the author of 22 books, mostly about whales, and a research fellow with the organization Whale and Dolphin Conservation. A dual US-Canadian citizen, he lives in England when he’s not trailblazing the world via plane or boat in support of the conservation of whales, researching their behavior, and sharing that knowledge with a global audience. For whales—and for Hoyt—there are no boundaries.

At the Shaw Ocean Discovery Centre in Sidney, British Columbia, Hoyt holds an audience captive with his exploits—that 1973 outing, the first time he met Keiko (aka Willy) in a sad little aquarium in Mexico City in 1991, and the fit and slender 65-year-old’s latest expeditions to the isolated Commander Islands in the Bering Sea, where he watched whales from shore and didn’t see a single boat for three solid weeks. Hoyt grins as he flashes a picture on a big screen of a bluff overlooking the sea, with a decal superimposed that reads (in Russian): “The Whale Trail.” 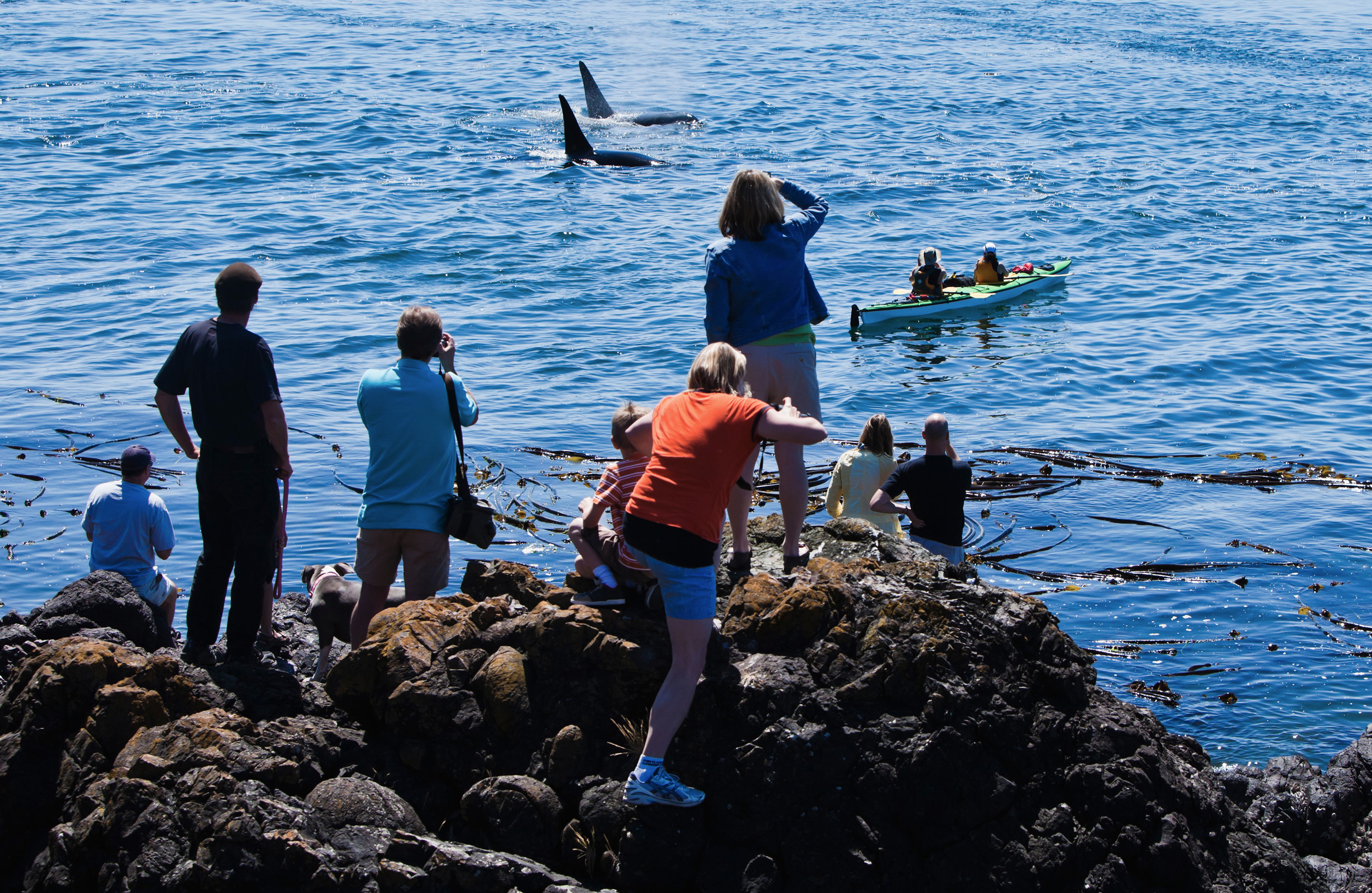 Killer whales—known as Southern Residents—reside in coastal waters in the Pacific Northwest from spring to fall and are easily seen from shore. Photo by Tim McGuire Images, Inc./Alamy Stock Photo

A few people in the audience break into wider grins. Hoyt has plugged an initiative launched in 2008—a shore-based network of whale watching outposts along the Pacific coast of North America. The Whale Trail is the brainchild of Donna Sandstrom, a former software manager from West Seattle. The trail is an alternative to invading whale territory with noisy, greasy engines.

Whale watching as a boat-based business dates to California, circa 1955, in the waters around San Diego, when a fishing boat skipper charged a buck per person to anyone wishing to see gray whales. Today, the whale watching industry is worth an estimated US $2.1-billion worldwide. In some countries, the industry polices itself, adhering (or not) to voluntary guidelines; in others, the government has regulations, though enforcement is spotty. Regulations govern certain actions, such as how close to whales a boat can operate: in the United States, it’s 183 meters (200 yards); Canada only has a guideline of 100 meters. Engine noise has scientists and whale lovers worried. There is no question about the negative short-term effects of noise pollution on whales and other cetaceans, including dolphins and porpoises, that communicate via underwater sound waves. The long-term effects of this bedlam below the waves, however, are a little fuzzier. Imagine living most of your day being followed by an out-of-tune mariachi band: a bit weird and kind of fun at first, but then annoying and, ultimately, nerve-racking.

After the talk, Sandstrom stands at a table smothered in handouts about the Whale Trail: brochures, decals, and information sheets for the taking. A few people venture over to check out the display, nodding as the cheery 50-something ocean and orca lover explains the idea behind the trail; if Sandstrom has a marine doppelgänger, it’s the charming, friendly, glass-is-always-half-full Dory, the star of the upcoming film Finding Dory, minus the ditz.

A woman approaches and hugs Sandstrom: Mae Moore, a founding member of Pender Ocean Defenders (POD) and an internationally successful Canadian singer-songwriter (her Top Gun songwriting credit forever cements her in the pop culture canon). Moore’s eyes crimp into half-moon slits as she beams at Sandstrom; she has the long hair and ethereal air of a bohemian (like an elfish Cate Blanchett), which masks the steeliness needed to make it in the music biz. And to give whales a land-based voice. The killer whales residing most of the year around Pender Island—one of the Gulf Islands in the Salish Sea, a two-hour ferry ride from Vancouver—are endangered. The 80 Southern Residents, an extended family of three pods, have had fewer salmon to eat, more pollutants to absorb, and a crazy amount of boat traffic to navigate through in recent decades. It’s not a good scene for population building. And to avoid extinction within a century, the Southern Residents probably need more whales, especially females, Hoyt says. 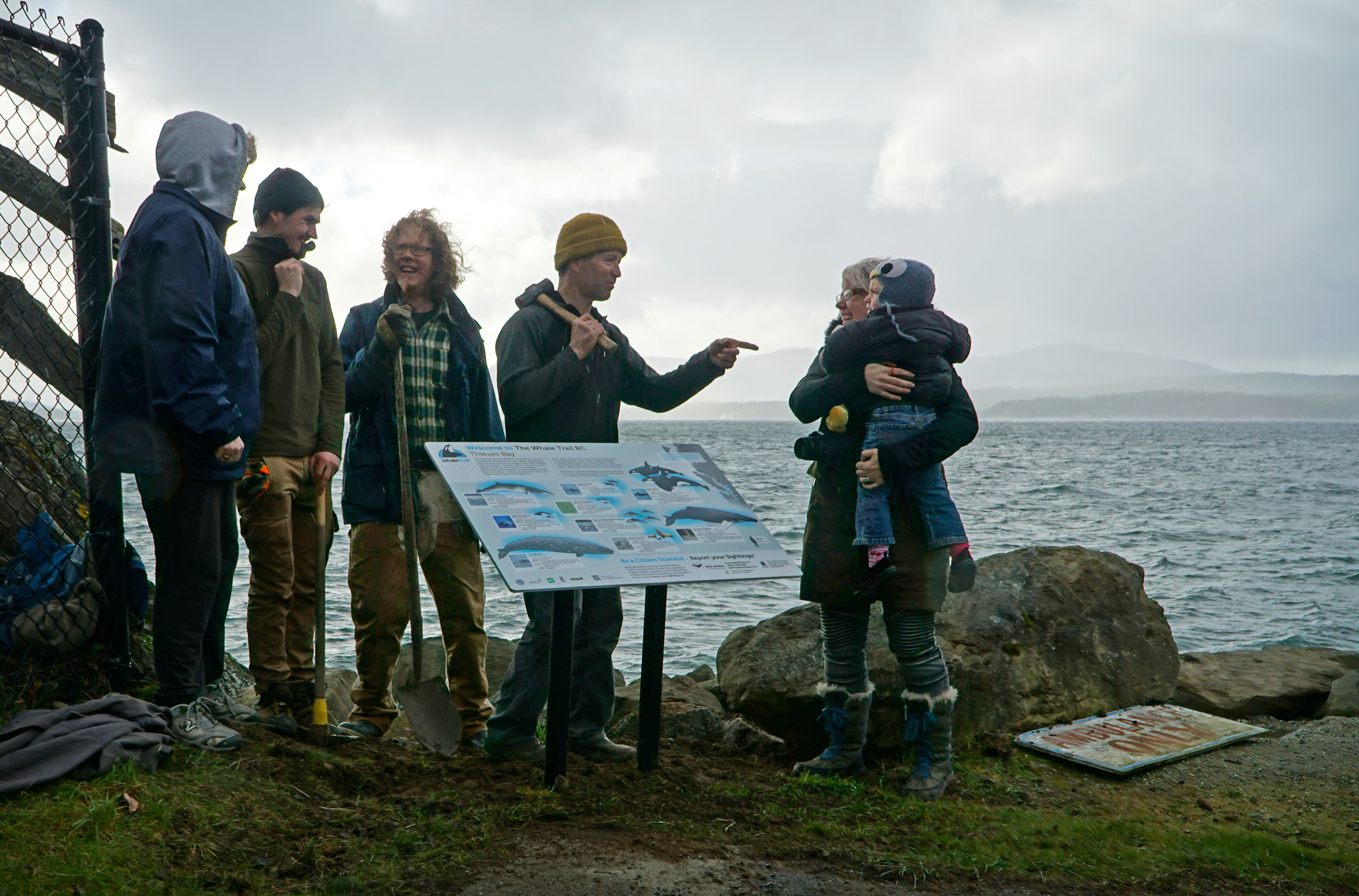 The POD team sees a solution, to the noise problem at least, in the Whale Trail, which the BC Cetacean Sighting Network is championing in Canada. On Pender and the surrounding islands, it’s easy to watch killer whales from shore. “I hear them before I see them,” Moore says. She’ll grab her bicycle and pedal to a nearby wharf to watch the whales torpedo by. Another Pender resident reports that once the whales were so close, they splashed the watchers planted on the shore. Some whale fans shoot video (a few listen with hydrophones) and send incriminating evidence of boats crowding the whales to Canadian government officials.

In October 2015, POD installed the first signs in British Columbia, followed by an interpretive panel a few months later. The Whale Trail’s first sign ever went up in 2010 on Washington State’s Olympic Peninsula; since then, whale fans have placed signs as far north as Telegraph Cove on Vancouver Island, and as far south as San Simeon, California. Many sites along the Pacific trail—the wilder spots—remain intentionally unmarked, found only as points on a Whale Trail map.

Sandstrom and Hoyt—handing out decals wherever he can—would like to see maps of the world’s coastline dotted with Whale Trail sites. “There are no boundaries,” Sandstrom says. The world is a giant whale trail.