On a North Sea shore in Scotland, a group of archaeologists struggles to dig in a storm. The wind is so fierce it threatens to blow them over, and bursts of hail and near-horizontal rain send them periodically scurrying for shelter. They’re battling water on more than one front: waves surge up the beach, threatening to inundate the worksite. Sometime after an expensive camera sails off a tripod and breaks, they abandon their dig.

Undaunted, the crew of professional and volunteer archaeologists returns a few months later to finish work at the site, a coastal farm called Meur. The structures they’re excavating have survived for thousands of years. But a strong storm uncovered the site in the first place, and the next storm could drag it into the ocean for good. In Scotland, as on coastlines around the world, climate change is both helping to reveal new archaeological sites and threatening to destroy them. Researchers and citizen scientists are racing time to collect the stories of these vanishing sites.

A little cluster of islands sits to the northeast of Scotland like an asterisk. This is the archipelago of Orkney. Near its top is a spindly island just 50 square kilometers in area. Called Sanday, it’s pronounced—and is—sandy.

In 2005, a violent storm caused widespread damage along Sanday’s coastline, rearranging beaches and uncovering intriguing stone structures at Meur. What at first looked like a grave turned out to be a Bronze Age water trough, about 4,000 years old. It was part of a structure called a burnt mound, a place where prehistoric people heated rocks in a fire, pushed them into a water-filled trough, and then discarded them in a heap. The purpose of a burnt mound is unclear, but theories abound: kitchen, sauna, leather tannery, maybe even something to do with brewing beer. Meur is a remarkably well-preserved site that includes several rooms and other structures. “It’s fairly unique,” says Tom Dawson, a University of St Andrews archaeologist who manages the organization Scottish Coastal Archaeology and the Problem of Erosion (SCAPE). “But it’s typical insofar as it is a spectacular archaeological site which is being destroyed.” 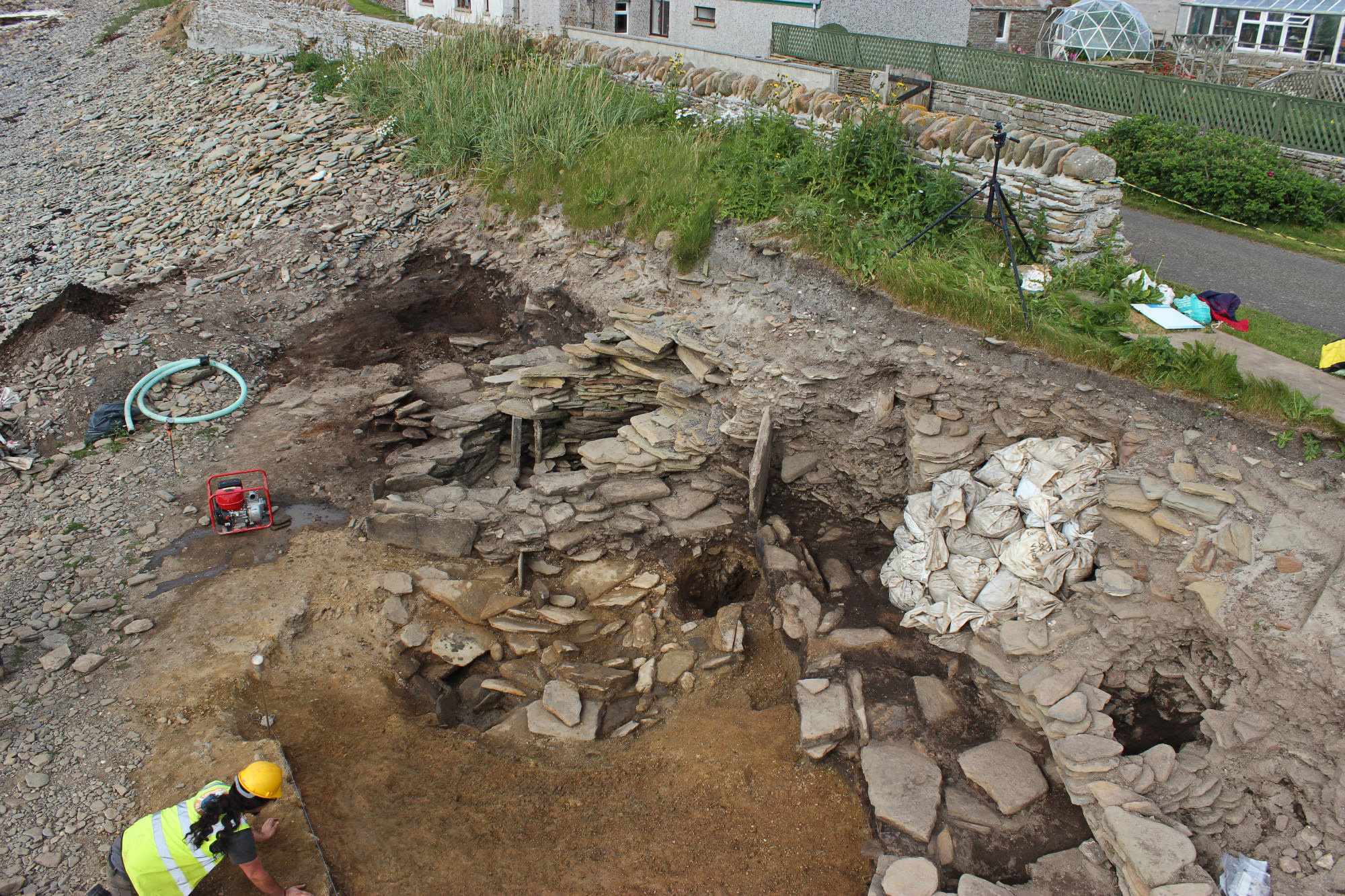 The Meur burnt mound in situ on the shore of Sanday. Photo courtesy of SCAPE/University of St Andrews

Natural coastal erosion is a long-standing problem in Scotland and the rest of the United Kingdom, especially on sandy shorelines. But climate change is generally expected to bring more of the severe storms that can tear off whole chunks of the coast at once. Rising sea levels, too, mean the waves during those storms can reach farther inland, eating the shore away faster. “Climate change has the potential to make an existing problem worse,” Dawson says.

When intense storms pummel the coasts, they often lay bare structures—like those at Meur—that were previously hidden. The earth here is densely layered with history. Generations of cultures—Picts, Gaels, Scots, Vikings—built on the same sites. “Also, people are throwing their rubbish around; that helps to make the sites build up,” Dawson says. Eventually, though, the long-abandoned homes were buried by sand. When a storm tears the coastline away, it reveals those ancient layers as if someone has opened up a dollhouse.

Dawson describes one site in the Shetland Islands, northeast of Orkney, where a cliff face recently tore away to reveal a large Iron Age tower called a broch. Until then, archaeologists were fairly sure they knew the whereabouts of all of Scotland’s brochs. Now, they’re trying to learn all they can about the newly discovered broch before it becomes the next casualty of a storm.

One of SCAPE’s projects builds on work started almost 20 years ago by Historic Environment Scotland (HES), the government agency charged with safeguarding the nation’s past. While new sites like Meur and the Shetland Island broch appear thanks to storms, environmental changes also mean that the states of known archaeological sites are constantly in flux—waves deposit a heap of stones on top of a ruin; a cliff crumbles and drops an old farm building into the sea. Dawson and his colleagues loaded more than 12,000 of the coastal sites HES had identified over the years—from caves to Second World War buildings—into an interactive mobile app, and they’re asking the public to help SCAPE keep the site information current.

Anyone out for a stroll near the ocean can use the app to find a nearby archaeological site and then upload a photo and answer a few questions about its condition. Assuming the site is still there, that is. Dawson says enough citizen scientists are using the app that they’ve already updated the information for most of the high-priority sites.

The app is one way to engage Scots who are eager to help preserve their country’s history. SCAPE found another way to channel this energy in 2012, when it asked local communities to nominate coastal sites that deserved attention from archaeologists. By asking the public for input, the organization hoped to get people more involved in their cultural heritage and to find projects that communities were passionate about. 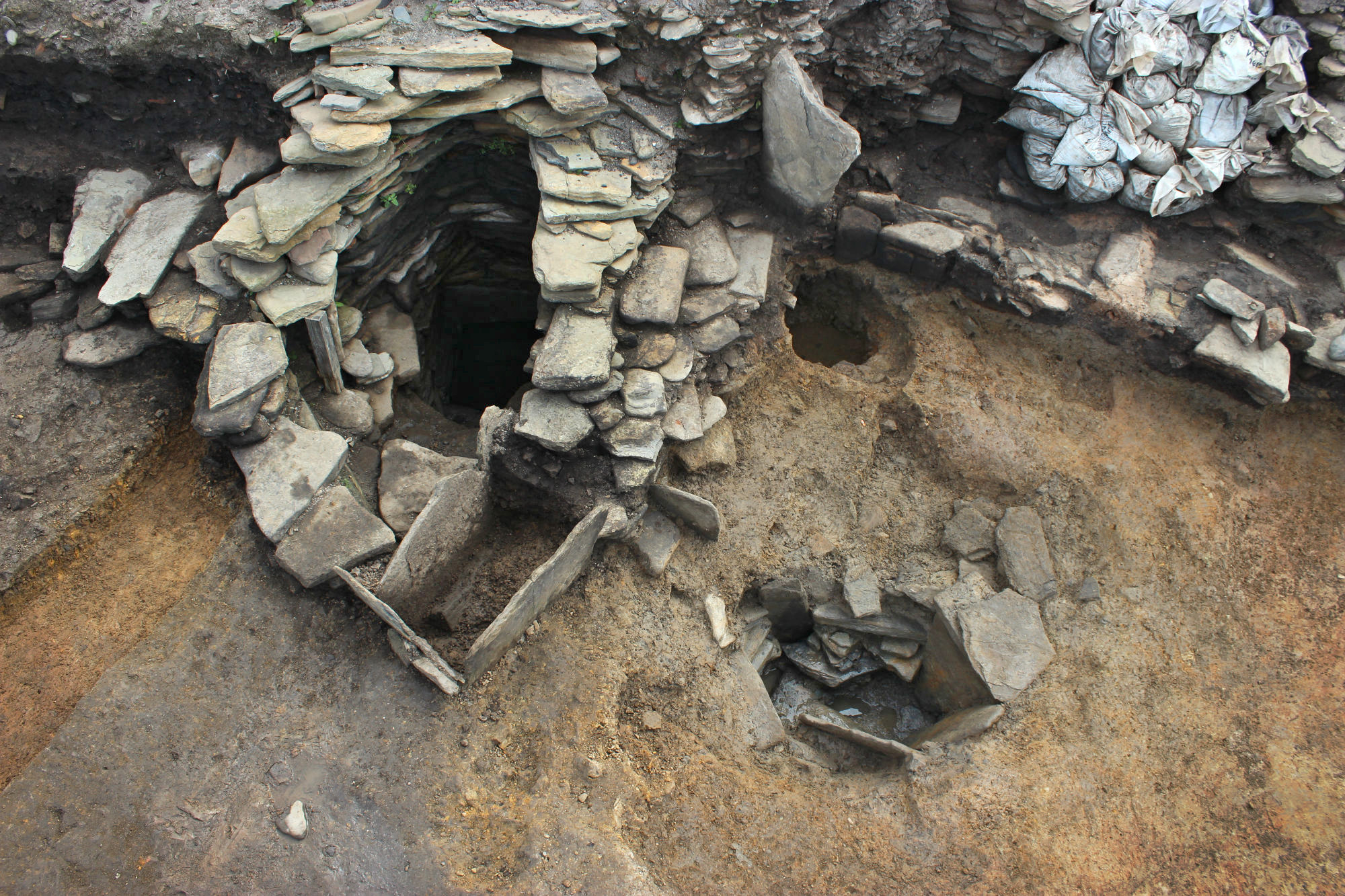 The final stages of excavation of the Meur burnt mound. Photo courtesy of SCAPE/University of St Andrews

When Catherine Parker, a resident of Sanday, heard about SCAPE’s call for site nominations, she leaped to respond. “The project was kind of made for us,” says Parker, who is also an archaeologist with HES. Finding a ruin popping out of the coastline is a common occurrence on Sanday. “Whenever there’s an unusually high tide, there’s new sand gone and new things revealed,” Parker says. Tiny Sanday has over 100 eroding sites. And those are just the ones that archaeologists know of.

Parker placed an ad in the local paper and gathered a group of volunteer archaeologists. When they got together to choose a site to nominate, they thought of the burnt mound at Meur. They wondered if they could move it entirely—pick up every last stone at the site, carry them inland, and reassemble them as an educational resource for the island. Could it be done?

SCAPE thought so and chose the project as one of a dozen to target for further research. In the summer of 2014, the community came together with Dawson and other SCAPE archaeologists to dig up Meur. First, they took photos, numbered the stones that made up the structures, and created 3D models of the site so they could replicate it later. Then they gathered the stones and carried them across the island. Farmers lent a hand, loading rocks onto their tractors and trailers. Farther inland, local builders helped to re-create the structures just as islanders had built them 4,000 years ago.

Outside the Sanday Heritage Centre, the reconstructed burnt mound site now resides in the side of a grassy slope. Parker says schoolchildren and other visitors come by all the time to learn about the Bronze Age relic. “It gets people thinking about how much the sea has taken away and what would have been there before,” she says. 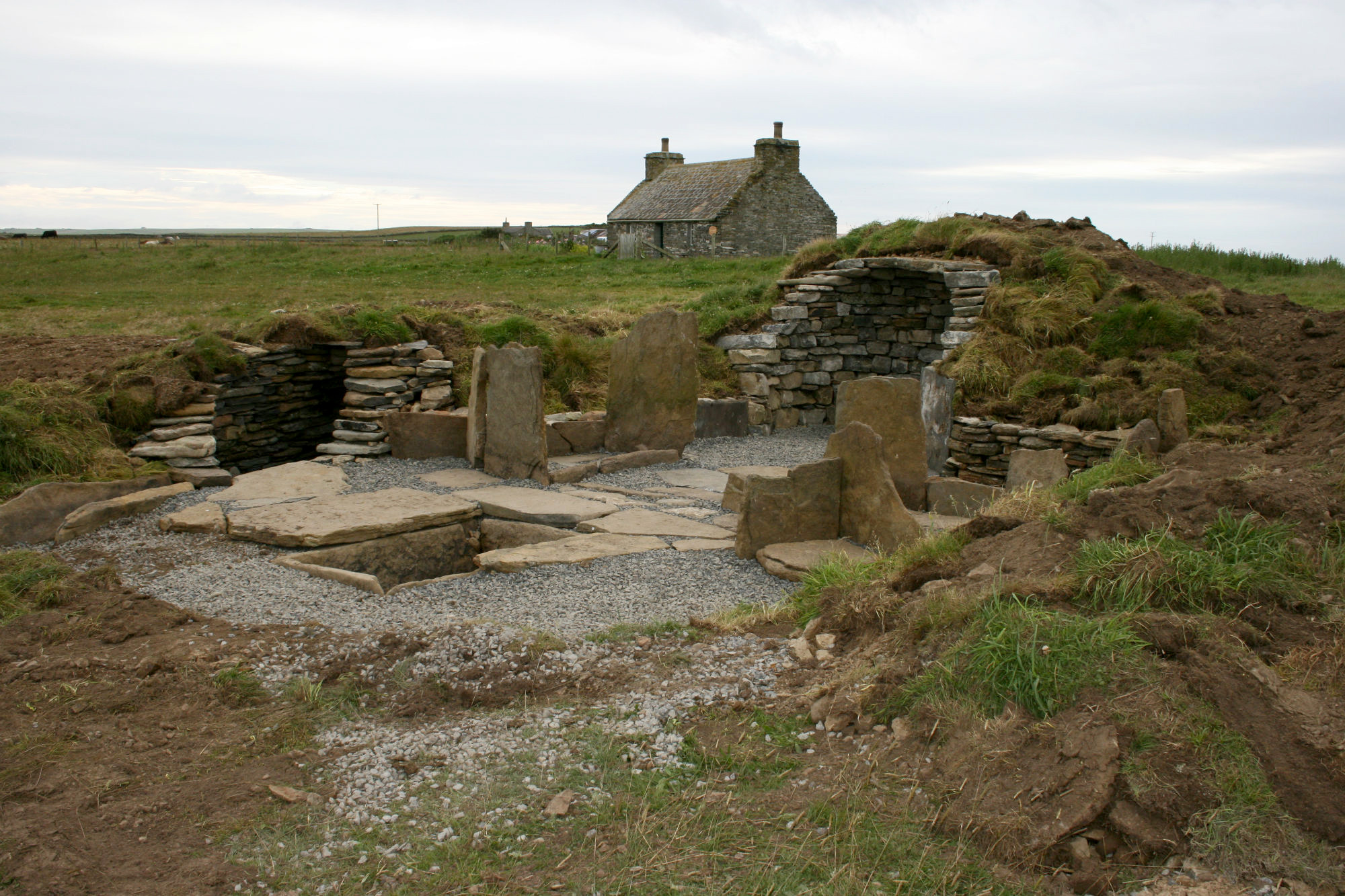 Most 4,000-year-old archaeological sites don’t get dug up and moved. When the team dared to lift away the top layer of Meur, they were rewarded with another astonishing group of structures that lay hidden beneath it. There was an entire Bronze Age well, with six steps leading down into it. “This is almost unheard of, to find a whole well from this period,” Dawson says. There was a room where people had heated the stones of the burnt mound; the walls were cracked from the intense heat of the fire, and the clay in the floor was baked orange. Farther down, the archaeologists uncovered yet another well, which radiocarbon dating suggests may have been there since the Stone Age.

These rooms are brimming with information, Dawson says. For example, archaeologists hadn’t known that Bronze Age people built sophisticated wells like the one at Meur. The cracked stones hint at the intense heat of the fire—another clue that may someday help researchers figure out what the mysterious burnt mounds were used for. There’s environmental history here, too. At the bottom of the well, the team found a heap of leaves, stems, seeds, insects, and tiny bones. This debris, which tumbled into the well thousands of years ago, may tell scientists what was living nearby at that time. And the position of the site itself could reveal how sea levels have changed.

Other potential insights into the lives of ancient people are at risk of falling into the sea along with their stones and skeletons. At a site in the Outer Hebrides, off the west coast of Scotland, archaeologists excavated a circular Iron Age building and found that its builders had buried bizarre objects in the floor: ritualistically prepared animal bones, a crucible, a handful of white quartz pebbles. No one has a clue why. “These sites are absolutely fascinating,” Dawson says. “But every single one of them is different, and every one’s got a different story to tell.”

On coastlines around the globe, other archaeologists are racing rising seas and disappearing shores to learn such stories. Ancient settlements are emerging from the coasts of Alaska. In Nova Scotia, storms are carrying off land and archaeological remains around the 18th-century Fortress of Louisbourg. At Qajaa on the west coast of Greenland, remains from three civilizations that lived there at different times during the past 4,000 years have been preserved in the permafrost but are now threatened by melting. Back in the United Kingdom, at the British site of Happisburgh, beach erosion in 2013 revealed human footprints possibly a million years old. The footprints washed away within two weeks.

In August 2015, when Dawson’s team and the Sanday volunteers return to Meur to finish the work of excavating the lower structures after being thwarted by storms that May, the weather is calmer and the crew can easily excavate and document the site. They make their notes, videos, and 3D models, and then re-cover the site and leave the remains to their fate.

The same thing happens with most such sites. Researchers hurry to learn everything they can from the precarious ruin before it disappears. The beautiful Meur well with its six steps is priceless, but cutting it out from the coast would make the road above it less stable. So now that they’ve studied it, archaeologists are letting it be.

Parker hopes SCAPE will someday have the funds to return to Sanday and study more of the sites emerging from its shores. But even if the visiting archaeologists don’t come back to the tiny island, its inhabitants will continue the work they started. The group Parker founded now has as many as 30 people helping out—impressive, considering the whole population of Sanday is around 550. Parker and her volunteers are eager to keep surveying and digging themselves. They’re evaluating an intriguing mound just down the shoreline from Meur and are trying to survey and excavate as many coastal sites as they can. “I think there’s a bit of territoriality about it,” Parker says. “It’s kind of our archaeology.”

So the islanders pull on their boots, zip up their jackets, and head back to the shore. Dodging storms and high tides, they may be able to unearth more of the island’s secrets before they wash away for good.