The Urban Assembly New York Harbor School is one of a growing number of high schools around the world teaching students maritime-related skills, such as how to sail. Photo by Terese Loeb Kreuzer/Alamy Stock Photo

With a long horn blast, the ferry casts off, stranding Zachary Perez, Erick Acevedo, and me. A cascade of late trains and other mishaps has put us all in the same missed boat to the small island in the middle of Upper New York Bay, where Perez and Acevedo go to school. It’ll be an hour until the next one.

Our destination is the Urban Assembly New York Harbor School, a maritime-focused public high school on Governors Island, a 70-hectare former military outpost off southern Manhattan. The eight-minute ferry ride is both one of the best and one of the worst things about the school, sophomore Perez says.

Taking a ferry to school is kind of cool. But “If you’re late by a minute,” he says, “you’ve missed it.”

Students come from all five New York boroughs to ride the ferry to this ocean science and technology school, where a typical day might involve hands-on activities such as scuba diving in the frigid harbor, tending the class plankton, or crewing on a 19th-century tall ship. Connecting city kids to their coastal environment and providing training for on-the-water careers, the New York Harbor School’s experiential program for students in grades nine through 12 has become a model for marine-themed schools around the world.

Finally, we’re on the boat. Perez commutes from Brooklyn, a 40-minute trip by subway and ferry. He’s studying aquaculture, he tells me as we make the roughly one-kilometer crossing on this cold February morning. The Staten Island Ferry chugs past as Perez talks about the tank of harbor fish he’s in charge of. He rattles off names like toad fish, flat fish, flounder, then checks himself: “Well, the flounder died.”

There are no tests or special requirements to get into the Harbor School. Prospective students rank their top choices among the city’s more than 400 public high schools, and admission is by lottery. Freshman Acevedo says he picked the school because “it’s not like every other school … they have these different programs where you get to do stuff based on water.” So far, he likes everything about it.

“I’ve always been fascinated by the ocean,” Perez adds. “It’s so vast. And we don’t know a lot about it.” 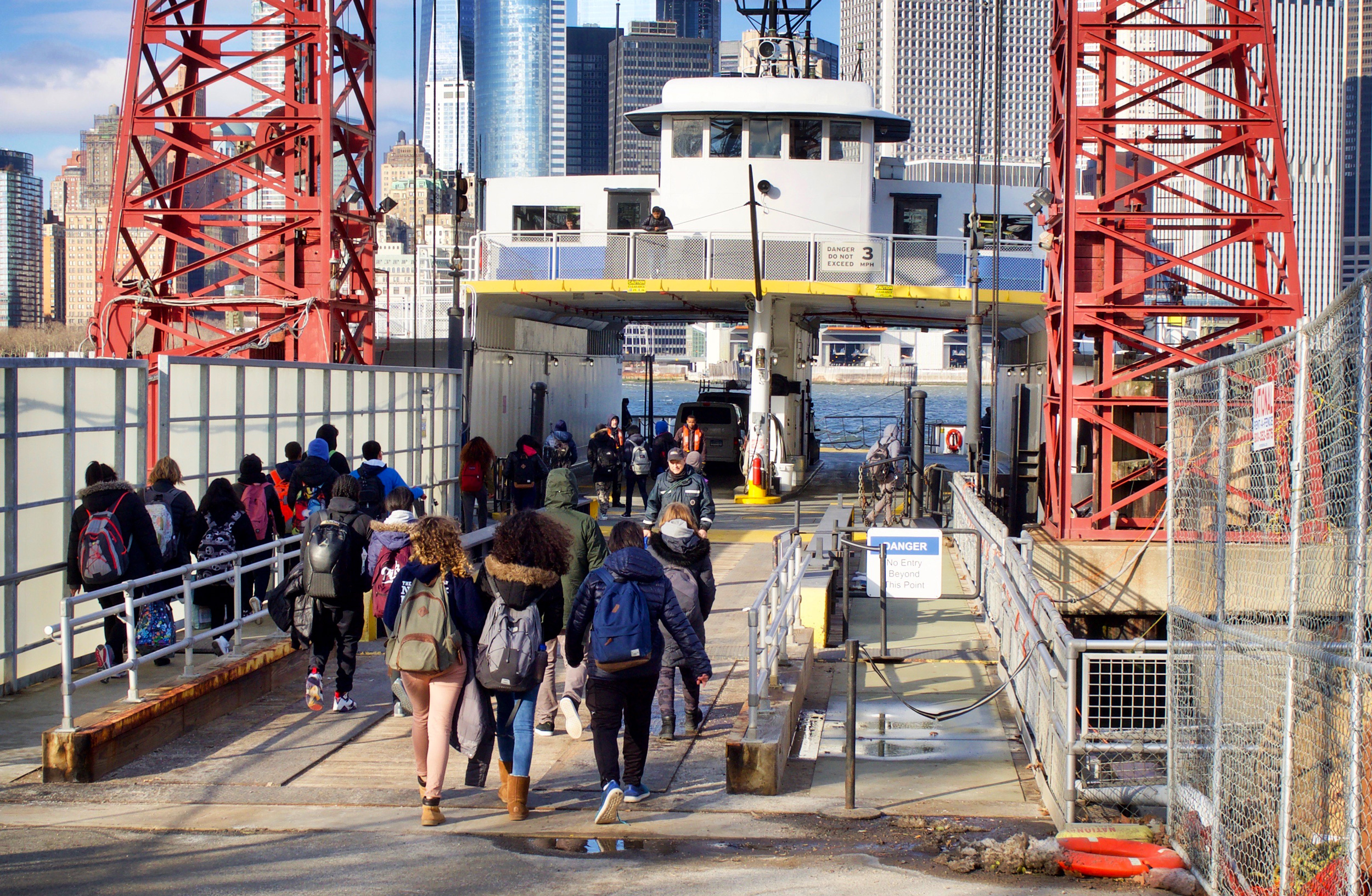 An icy wind stings our faces when we disembark on Governors Island. The boys rush off to class, while a brisk walk past rows of tidy brick barracks takes me to the former coast guard boat station where one of the school’s cofounders, Murray Fisher, works. Tanks of oysters bubble near his small desk. A briny, fishy smell fills the air.

Fisher looks like a mariner with his ruddy complexion, wind-whipped hair, and thick, sea captain beard. But the Virginia native grew up on a farm, and says he’s more at home amid birds and trees than on the water. He began his mission to launch the Harbor School in the early 2000s, as a young biologist working for the clean water advocacy group Waterkeeper Alliance.

Initially, he thought of setting up a training academy for the organization. Then he realized that the New York City public school system had a host of themed schools ranging in focus from physics to art to cooking. But there was nothing related to the harbor—this “gigantic thing,” as he calls it, that surrounds the city. “The reason the city was created here is this massive, once-productive ecosystem in New York Harbor,” says Fisher.

So in 2002, he went around the city trying to muster support for a high school concentrating on the harbor. “And everyone’s like, ‘Yes!’ It was just so weird, I was 27, and I didn’t know what would happen.”

What happened was he got city approval to launch his school on the site of a failing public high school in the Brooklyn neighborhood of Bushwick. “A very poor community,” Fisher tells me. Fewer than one in four students attending the local high school managed to graduate. The Harbor School opened there in 2003 with 125 students. Since then, it’s grown to 475 and moved into new digs in renovated buildings on Governors Island.

The curriculum includes all the state-required traditional academic courses, along with six dedicated career and technical programs. Subjects such as English and math are taught nearby in a former coast guard hospital, revamped with nautical-themed decor complete with porthole windows in the doors, wave patterns on the floors and walls, and a room-sized aquarium in the front lobby. The building I’m in now is the Marine Affairs, Science and Technology Center, where students take some of their practical classes for on-the-water jobs. Orange life jackets for aquatic activities such as vessel operations line the hallways. There’s a shop jam-packed with tanks, regulators, and drysuits for scuba dives into the cold, rough harbor waters. Giant glass cylinders of algae loom over the aquaculture lab. Ubiquitous oyster tanks line the walls.

It’s a particularly exciting time in aquaculture class, the students tell me, because they’re feeding the oysters a special diet to get them ready to spawn. The larvae will supply the Billion Oyster Project—an ambitious effort spearheaded by the school and the New York Harbor Foundation to re-establish the prodigious oyster beds that once lined the harbor. With the help of Harbor School student hatchery technicians, boat drivers, marine biologists, and others, 25 million oysters have been replanted in the estuary since 2008.

Down the hall in the marine systems technology class, instructor Jimmy Sanchez and his students are poring over a disassembled outboard engine. Sanchez was a student here himself not too long ago. He had picked the Harbor School at random.

“I didn’t know what it was. I didn’t care,” Sanchez says over the din of students welding at the other end of the room. Never much of a student, he had hoped to become a cop, but was rejected by all the law enforcement schools he applied to. He was crushed at the time. Now he considers it serendipity. 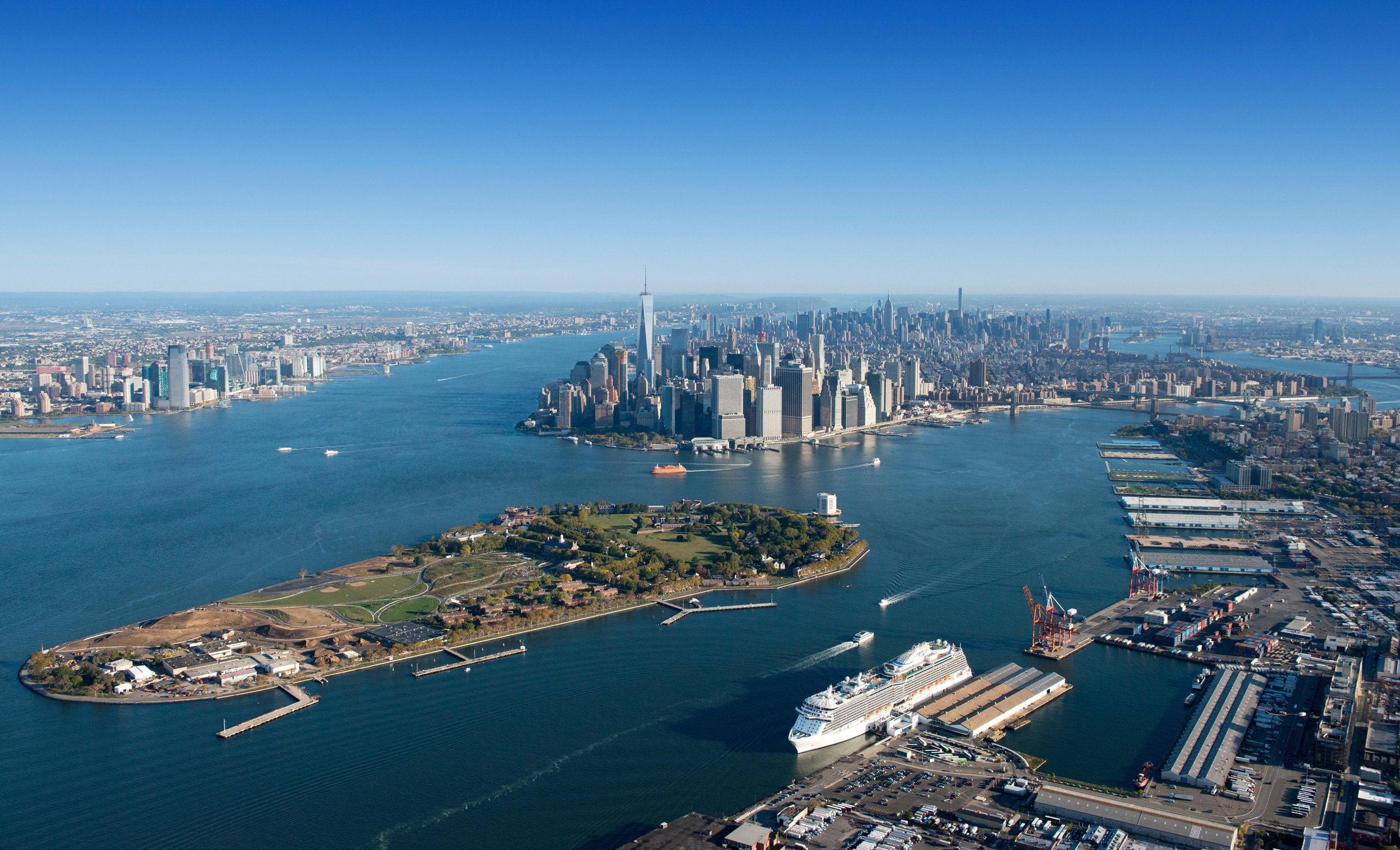 From their campus on Governors Island, a former military outpost, students at the New York Harbor School have excellent access to marine-related educational opportunities. Photo by Tracey Whitefoot/Alamy Stock Photo

“Going to this school just changed my whole mind. Taught me how to work with mechanics,” Sanchez says. “I didn’t see myself being an engineer until I saw how fun it could be.”

The marine environment is an ideal setting to reach marginalized city kids through immersive learning, Fisher says. Kids who didn’t know how to swim are now soaking up science while diving in the bay. Kids who had never been near the water now sail in the school’s club. He recalls an especially distracted student who found his focus in vessel operations, piloting the school’s 12-meter boat on scuba class outings. “All of a sudden in that setting the learning is so intense, because it has to be,” says Fisher. “Because the lives of your fellow students require it.”

While most of the maritime education takes place in the career and technical courses that train students for jobs “around, in, and on behalf of the marine environment,” as Fisher puts it, Harbor School faculty—called crew—work the aquatic theme into some of the core subjects as well. Academic classes include topics such as marine policy and naval literature; geometry and trig involve plotting ship vectors. The innovative curriculum seems to be working: more than eight in 10 Harbor School students graduated on time last year, a vast improvement from the under 25 percent graduation rate in the local school that preceded it. They’ve gone on to college and maritime jobs, such as mates on container ships. New York City’s first female ferry captain trained at the Harbor School.

A tide of ocean science and technology schools is now rising nationwide, says Arthur H. Sulzer, a retired navy captain and member of the Maritime for Primary and Secondary Education Coalition, which is promoting the programs in urban public schools. Sulzer, who has a doctorate in education, says his research suggests that experiential learning is one of the best ways to reach unmotivated students—boosting attendance, graduation rates, and test scores. “Marinating” coursework with nautical activities such as boatbuilding fosters confidence, trains attention, and promotes discipline, he says.

In 2003, Sulzer helped launch the Maritime Academy Charter School in Philadelphia, Pennsylvania. When it started—the same year as the New York Harbor School—there were just a few such schools in the United States, according to Sulzer. Now, the organization counts more than 30 US high schools with some type of nautical program, including the Maritime Academy in Toledo, Ohio, the Sound School in New Haven, Connecticut, and the Ballard High School Maritime Academy in Seattle, Washington. Overseas, maritime schools have sprung up near coastal communities from Plymouth, England, to Cape Town, South Africa.

The Harbor School concept has touched a nerve because cities everywhere are struggling with disaffected youth and degraded waterways, says Fisher. Its focus on the local environment engages kids in restoring their local ecosystems, while they learn related job skills at the same time. “It’s sort of an obvious concept once you start thinking about it,” he says, as the ferry horn sounds in the distance.

Now the school day has ended. A wave of students pours out of class. In flashy gold basketball shoes and fuzzy brown Uggs, headphones and hoodies over navy-blue Harbor School shirts, they laugh and jostle, meandering toward the ferry. The horn blasts. The youthful wave gathers speed and rushes onboard.