It’s common to see bears gorging on salmon in places like British Columbia’s Great Bear Rainforest. In coastal regions, salmon provide a vital source of nutrients that support the wider ecosystem. But a new study shows that even as far as 1,000 kilometers from the coast, bears count on salmon.

“What we found, and what we are really excited about, is that there are hotspots in the interior where bears are still accessing a lot of fish,” Adams says. “In some cases, over 30 or 40 percent of their annual diet is made up of salmon.” 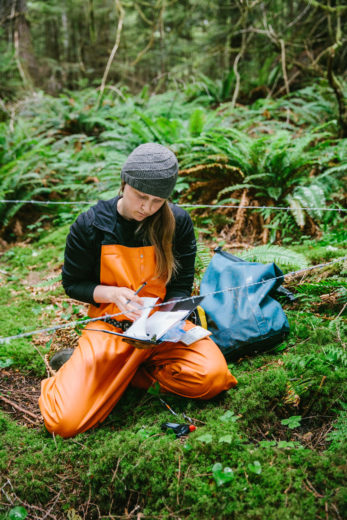 The researchers collected samples from grizzly and black bears in May and June from 2010 to 2014 at hair-snagging stations on islands and in mainland coastal valleys. They then compared the results to hair samples collected by provincial employees across nearly 700,000 square kilometers of habitat throughout the rest of British Columbia from 1995 to 2003. In total, their study included samples from 880 grizzly bears and 557 black bears.

The hotspots cut deep inland in habitat around salmon-rich rivers such as the Nass, Skeena, and Fraser. Salmon-eating bears were found as far from the coast as the end of the Fraser River, which is about 1,000 kilometers inland, and at the provincial boundary with Alberta near Quesnel Lake, which is 612 kilometers away from the coast.

“In the interior, where it’s harder for bears to make a living because they do have less access to salmon than on the coast, those access points, [where bears find salmon] are probably quite critical for those populations,” Adams says, explaining that bears often access food in shallow water or slower moving creeks.

Aside from the geographic distribution, the study also showed that grizzly bears eat more salmon than black bears, and males of both species consume more salmon than females. The findings are important because bears that have access to protein-rich salmon have an easier time hibernating in the winter. Higher body fat also helps female bears produce more cubs.

Grant MacHutchon, a wildlife biologist who studies grizzly bears in the Nelson, British Columbia, area and was not involved in the new study, says the results are not a huge surprise.

“There are lots of systems in the interior where salmon are accessible,” he says. MacHutchon says bears are regularly seen fishing for salmon in the Fraser and Chilko Rivers—although he notes it can be a fluctuating food source based on the annual salmon run. In other parts of the interior, the major food source for bears is huckleberries, he says.

Both MacHutchon and Adams say the latest results show the areas around identified salmon hotspots could be better protected. 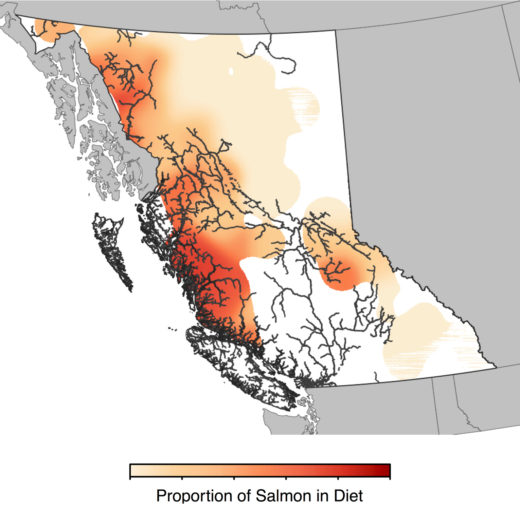 In a sample of 586 male grizzly bears from around British Columbia, researchers found regions where the bears’ diets include more (darker shades) or less (lighter) salmon. In some spots, salmon makes up the bulk of the bears’ food intake. Interestingly, not all of these salmon hotspots are near the coast–some can be found far inland. Photo adapted from a figure by Adams et al. Map by Adams et al./ESA

“Managers of the Fraser [River] could look at these maps and say, ‘We always knew that bears fish this river, but it looks like this spot is important,’” says Adams. “Maybe there is a way to account for users other than people.”

Adams says that this approach—of keeping the bears’ needs in mind—is a guiding principle for the Wuikinuxv Nation. Adams collaborates with Wuikinuxv managers as part of the Central Coast First Nations Bear Working Group.

“It’s part of having a sustainable fishery,” says Danielle Shaw, the nation’s stewardship director. “We have a responsibility to ensure all other species are fed before we fill our own bellies.”

Adams adds that bears and salmon—two of British Columbia’s most important species—aren’t thinking about geopolitical boundaries.

She says the animals don’t care that salmon are managed federally and bears are managed provincially.

“It reminds us of the vast geographic connection of this predator-prey system. We have to be accountable to the scale of this ecological interaction if we are going to attempt to manage these species in an ecosystem-based framework.”

*Megan Adams’s research is supported by a grant from the Tula Foundation, which also funds Hakai Magazine and the Hakai Institute. The magazine is editorially independent of the institute and foundation.